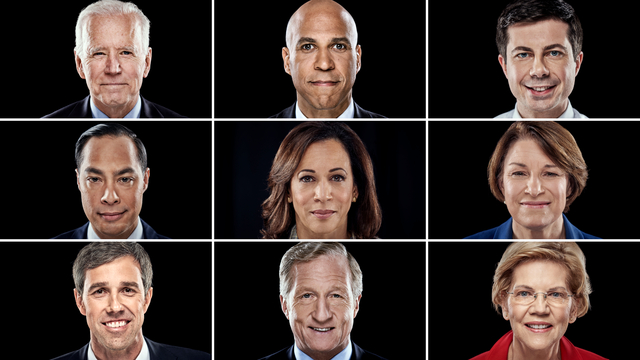 Here's the key takeaway from each candidate's town hall:

Asked if he would put strong measures in place to increase oversight over health care access to LGBTQ asylum seekers if elected president, businessman Tom Steyer said, "Of course we will."

He took a shot at President Donald Trump and his treatment of migrants in US Immigration, Customs and Enforcement detention facilities.

"I think it's absolutely critical for the United States of America to treat people in a humane and decent fashion. It's very obvious that this President and this administration has chosen to not only break the international laws in their treatment of asylum seekers, but to break the basic laws of humanity," he said.

Steyer continued: "When I think about why I started the need to impeach campaign two years ago, yeah, he's a criminal, it's true that he more than has earned impeachment, but it goes much beyond this and it goes to exactly this kind of issue. The actual President of the United States committing crimes against humanity, like this, in our name, is something that we should end right now. Certainly the first day of my presidency."

The concern about mental health problems and high suicide rates among vulnerable people within the LGBTQ community was a huge focus for many of the Democratic candidates at Thursday's CNN town halls in Los Angeles. Tom Steyer argued that the alarming statistics themselves should have the power to move public opinion toward the “social acceptance of people.”

Steyer, a billionaire hedge fund founder, argued that the president needs to “show exactly where their heart is” through their behavior.

“When I think about this from the standpoint of what you can do to change the way people view themselves, and other people view them in the LGBTQ community, I think on the very first day there should be steps taken to undo the example that Mr. Trump and Mr. Pence have laid for the country,” Steyer said. “That would mean undoing the ban on transgender military people. It would mean undoing the ban on visas for same-sex partners of foreign diplomats, and mean appointing people from the LGBTQ community to high important parts of the administration.”

Steyer touched on the number of LGBTQ people who face discrimination on a daily basis and have no protection under federal law. And he said he was stunned to learn that half of transgender youth attempt suicide.

“If that doesn’t explain to you that the very dire situation that they feel themselves to be in, then you must have a heart of stone,” Steyer said. “Anyone who doesn’t want to do whatever it takes to protect the young people, really must search their soul to find out what their deepest values are. As an American that would seem as basic as you can get—in terms of protection, equality, justice. My goodness. I don’t see that there’s another side to the conversation.”

Julián Castro called on his successor as head of the Department of Housing and Urban Development, Ben Carson, to resign over disparaging remarks the Trump appointee made about transgender people.

The former HUD secretary was referencing a Washington Post report in which Carson is said to have warned colleagues that “big, hairy men” were attempting to make their way into women’s shelters.

In response to the initial report, Castro tweeted: “19 Black trans women have been killed this year because comments like Ben Carson’s normalize violence against them. As HUD Secretary, I protected trans people, I didn’t denigrate them.”

Former Housing and Urban Development Secretary Julián Castro said, as president, he would make foreign aid contingent on how the rights that other nations afford to the LGBTQ community.

Castro’s stance, if implemented, could mean cuts in foreign aid to a number of countries that have long received American money for a host of reasons, including geo-political and poverty.

“Throughout the world today, we have countries that are openly violating the human rights of the LGBTQ community. In some cases, subjecting them to injury and to murder. The United States needs to stand up for human rights—including the LGBTQ community,” Castro said. “That includes making foreign aid contingent on those rights.”

Castro added: “I don’t think it’s enough for us to just say words. We have to take action. … And I would do that as president.”

Other candidates, including former Vice President Joe Biden, said they would factor in LGBTQ rights into foreign aid decisions.

“I would in fact curtail aid, curtail foreign assistance to countries who in fact engage in, engage in this kind of behavior,” Biden said.

"Yes... I will," she said. "And I think there's also — you know, I think that there is a lot of work we need to do, all over the country, with driver's licenses as you know, not every state has some of the provisions that California have in place and just work on a state-by-state basis to make those changes."

Why this matters: Members of the non-binary community, or people who reject traditional gender binaries such as "man" or "woman," would be able to choose X on important documents, such as birth certificates.

At least five states allow non-binary people to choose X as their gender on their birth certificates.

Klobuchar went on to say presidents should play a big role in recognizing how people identify themselves.

"You want to be able to bring people in. We have a President right now in the White House who spends his time dividing people in any way he can. Every single morning he writes a tweet going after someone, going after people of color, going after immigrants, going after transpeople. It just never stops. And so I think it's going to be just a complete change to have a new president in place. That's putting it mildly. And just changing that culture and changing the tone of our politics, and part of that will be educating people about people's identities and what's happened and where they are because he sure isn't doing that," she said.
WATCH HERE:

Minnesota Sen. Amy Klobuchar said Thursday that so-called conversion therapy, a widely discredited practice that seeks to change to sexual orientation of gays, lesbians and bisexuals, should be illegal because it “makes no sense at all.”

“Yes,” Klobuchar said when asked whether she will ban these practices. “We know this isn’t the right thing to do.”

So-called conversion therapies, sometimes referred to as reparative treatments, centers on the debunked assumption that sexual orientation can be changed by a series of procedures. The practice is widely decried and leads to significant childhood traumas.

The questions came from Seth Owens, who was forced into conversation therapy when his parents discovered his sexual orientation. He went on to be the valedictorian of his high school and was accepted to Georgetown University.

“What I’m amazed about you, Seth, is you somehow got through this and are a hero to so many other young LGBTQ community members,” Klobuchar said. “We’ve all seen some of the things that are going on, bad practices, bad policies. But you also have acceptance in a community that’s going to be so important so for me a lot of that is holding up people like Andrea Jenkins. It is role models. It is education. And it is making sure that we fight it at every level. Yes, at the federal level but also the state and local levels.”

Former Rep. Beto O’Rourke also said Thursday that conversion therapy “should be illegal” because it is “tantamount to torture.”

Former Rep. Beto O’Rourke said Thursday that conversion therapy, a widely discredited practice that seeks to change the sexual orientation of gays, lesbians and bisexuals, “should be illegal” because it is “tantamount to torture.”

“As president, we will seek to outlaw it everywhere in this country,” O’Rourke said Thursday at CNN’s LGBTQ town hall. “In my opinion this is tantamount to torture. Torture that we’re visiting on children who are absolutely defenseless.”

So-called conversion therapies, sometimes referred to as reparative treatments, centers on the debunked assumption that sexual orientation can be changed by a series of procedures. The practice is widely decried.

“So we’re going to make sure that whatever the penalty is, it is steep enough to dissuade anybody from entering into this practice or being able to torture kids with the kind of impunity that we have seen so far,” O’Rourke said. “And we’re also going to recognize that these kind of practices, in addition to the immediate torture that that child or that person feels also adds to other challenges that we have.”

A series of states have made conversation therapy illegal.

In a recent study by The Williams Institute at UCLA’s School of Law, scholars estimated that some 16,000 LGBTQ youth, ages 13 to 17, would receive conversion therapy from a health care professional before the age of 18 and another 57,000 youth will get that treatment from a religious or spiritual advisor.

That is happening despite the fact that polls have found that more than 50% of Americans support making conversion therapy on youth illegal.

The Williams Institute estimates that some 698,000 LGBT Americans have received conversion therapy at some point in their lives. You can read their report on the topic here: https://williamsinstitute.law.ucla.edu/wp-content/uploads/Conversion-Therapy-LGBT-Youth-Update-June-2019.pdf

“There can be no reward, no benefit, no tax break for anyone or any institution, any organization in America that denies the full human rights or the full civil rights of every single one of us,” the former Texas congressman said at CNN’s Equality Town Hall in Los Angeles.

It was the same question that New Jersey Sen. Cory Booker had refused to offer a yes-or-no answer to earlier in the town hall.