Yang added: "The math says Joe is our prohibitive nominee."

It’s only been a week since Super Tuesday, when Michael Bloomberg and Elizabeth Warren were still on the ballot. Tonight, their absence in the race is benefiting Joe Biden — particularly in the critical Detroit suburbs.

The Biden campaign is feeling good about Oakland County — one of the those critical suburbs.

We spent time there on Sunday – and one thing was clear: the departure of Bloomberg and Warren from the race was essential to Biden.

Here's what a top Biden adviser in Michigan said tonight:

“Elizabeth Warren hasn’t endorsed anyone in this race, but her supporters are going with Biden. We can see that now.”

Anecdotally, given our time there on Sunday, that sentiment is coming true — as it is in other suburbs across the Detroit metro area.

Joe Biden's projected Michigan win was carried by voters over the age of 65, moderates, and black voters, according to exit polls.

Around two-thirds or more of Biden’s core voter base, older voters, black voters, and moderates supported him in Michigan, as well as those who oppose a government-funded health program, voters whose top priority is race relations, and voters who prioritize beating President Trump over someone who agrees with them on policy.

Biden also performed much better than expected among groups Bernie Sanders won in 2016. The former vice president and the Vermont senator are currently neck and neck among men without a college degree, a group that Sanders won by 22 points in Michigan over Hillary Clinton in 2016.

There are 125 delegates at stake in Michigan tonight.

Who won in 2016: Bernie Sanders won the Democratic primary and Donald Trump won the Republican primary.

In Mississippi, Joe Biden's biggest supporters were voters without a college degree, those over the age of 45, and moderates.

Biden carried around 9 in 10 voters in each of these groups — similar to how he performed in Alabama on Super Tuesday.

Democratic primary voters in Mississippi said that uniting the country was the top quality they were looking for in a nominee, according to CNN exit polls. Biden won more than 9 in 10 of those voters, too. He also soundly beat Bernie Sanders among voters who prioritized bringing about needed change and those who said caring about people like them were qualities that mattered most.

Joe Biden won Missouri — a state Hillary Clinton barely took in 2016 — by carrying Democratic primary voters over 65, black voters, and those without a college degree, according to CNN exit polls.

Almost three quarters of each of those groups went for Biden.

Missouri exit polls also found a close race between Biden and Bernie Sanders among men without a college degree, a group that Sanders won in 2016 by 60%, topping Clinton by 21 percentage points. Sanders also lost support among independent voters. Slightly over half voted for him in 2020, versus 67% in 2016.

After CNN projected that Joe Biden will win Mississippi and Missouri, here's where the former vice president and Sen. Bernie Sanders stand in the delegate count.

Remember: A candidate needs 1,991 delegates to win a majority and the nomination. So both Biden and Sanders are a long way from hitting that number. 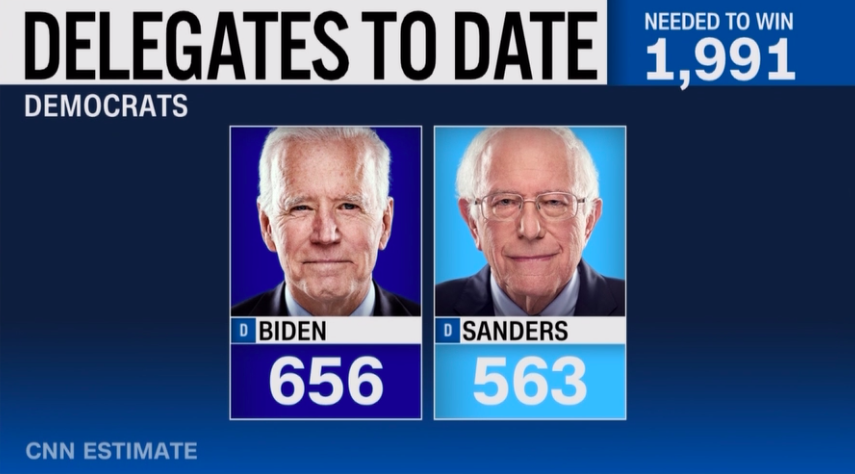 Joe Biden is leading in Michigan over Bernie Sanders.

Here's where things stand in Michigan: 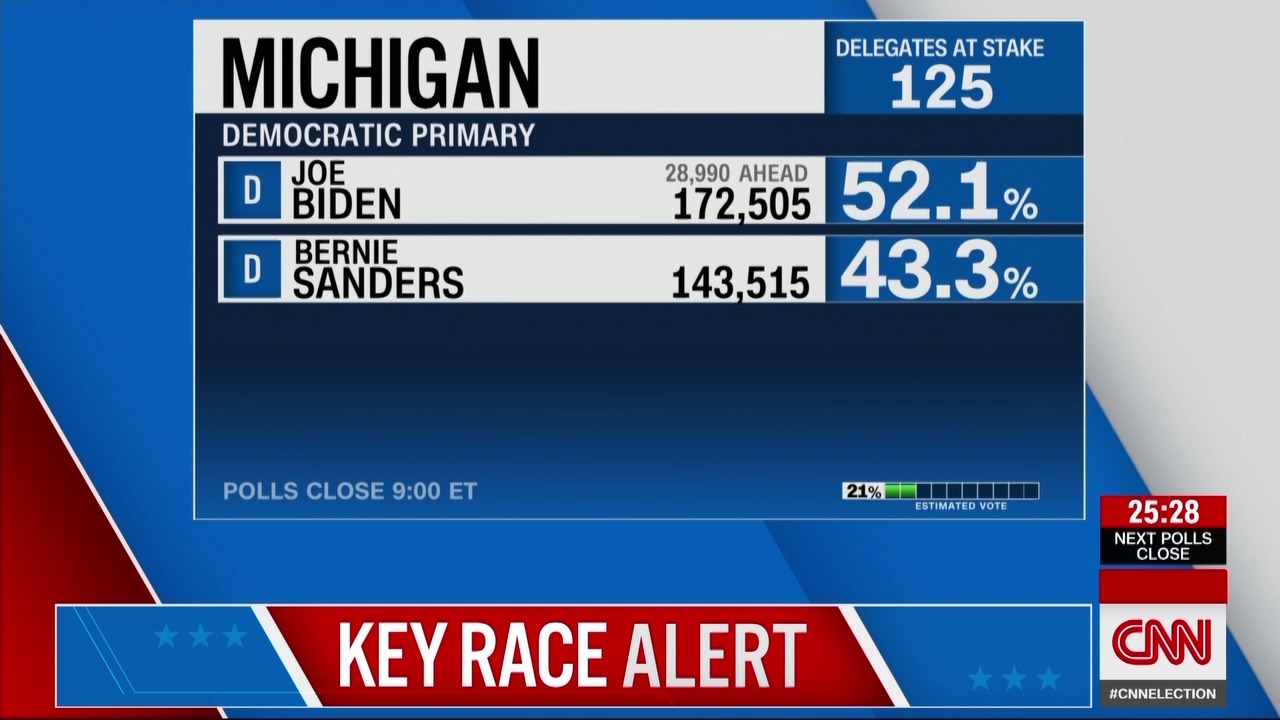 There are 68 delegates at stake tonight in Missouri.

Who won in 2016: Hillary Clinton won the Democratic primary and Donald Trump won the Republican primary.