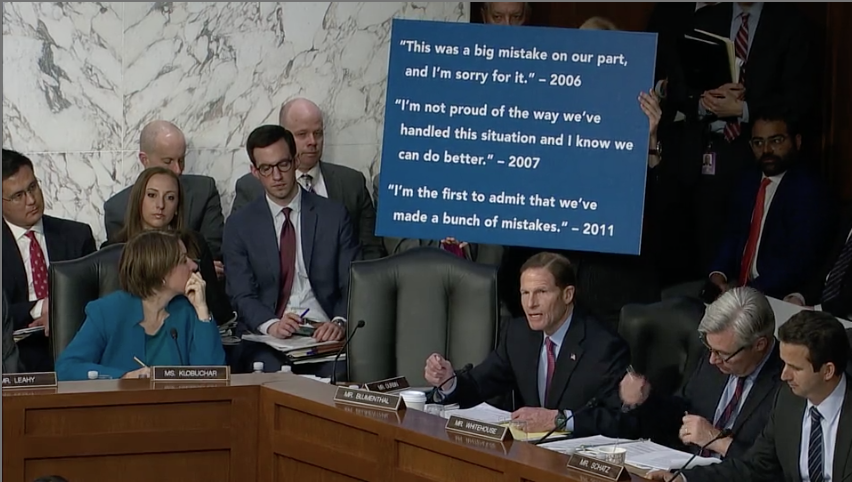 Sen. Richard Blumenthal had staffers stand behind him holding up a sign that displayed Mark Zuckerberg's past apologies.

The first, from 2006, followed the outrage that came when Facebook surprised its users with the launch of News Feed, which many believed would be a tool for "stalkers."

The second, in November 2007, came after a tool called Beacon informed users what their friends had purchased.

The third was from December 2011 following Facebook's settlement with the Federal Trade Commission over privacy violations.

While Zuckerberg was testifying, Facebook stock closed with its best percentage gain since April 2016.

Facebook's stock was up about 2% even before Zuckerberg sat down. It moved even higher when he started addressing some of the tough questions from lawmakers, including one from Senator Lindsey Graham about whether Facebook was a monopoly.

Facebook finished the day with a 4.5% gain, a seeming sign of confidence in Zuckerberg from Wall Street.

During the hearing, Zuckerberg reaffirmed his support for the Senate Honest Ads Act — legislation that would disclose political ads.

This bipartisan legislation would place new disclosure requirements on political advertisements in an effort to combat the kind of election meddling that Russia engaged in during the 2016 election campaign.

He also added Facebook is adding a feature where users can see what all the ads are on Facebook.

Facebook CEO Mark Zuckerberg "is not being sworn-in under oath, but he still has a legal obligation to testify truthfully," a Commerce committee GOP aide tells CNN. "By tradition, the Commerce Committee does not swear-in witnesses," the aide added.

During his round of questioning, Sen. Lindsey Graham asked Mark Zuckerberg if he thought Facebook was a monopoly.

"It certainly doesn't feel like that to me," Zuckerberg said.

That response drew some light laughter from some in the room.

Asked whether Facebook employees were involved with Cambridge Analytica during the 2016 presidential campaign, Zuckerberg said he didn't know, though they did "help out."

"Although, I know we did help out the Trump campaign overall in sales support in all in same way that we help do with all other campaigns," he said.

Why we're talking about Cambridge Analytica

Last week, Facebook said Cambridge Analytica may have had information on about 87 million Facebook users without the users' knowledge. Previous reporting had put the number of users at about 50 million.

The data obtained was originally collected by University of Cambridge professor Aleksandr Kogan who used an app called "thisisyourdigitallife," which offered a personality test. Facebook users who downloaded the app granted it permission to collect data on their location, friends and things they Liked. The data collection was allowed by Facebook at the time.

However, Facebook has said that Kogan violated its terms of service by giving the information to Cambridge Analytica.

Facebook banned Kogan and Cambridge Analytica from its platform last month ahead of a New York Times investigative report about how the data was passed on.

Zuckerberg said his employees have spoken to the Mueller team, but he has not personally been interviewed.

"I want to clarify, I'm not sure we have subpoenas. I know we're working with them," Zuckerberg said.

CNN reported in September that Facebook handed Russia-linked ads over to Mueller under a search warrant.

Codepink demonstrators held signs before a joint hearing of the Senate Judiciary and Commerce Committees with Mark Zuckerberg that read, "Protect our privacy," "Stop corporate spying," and — in a literal sign they weren't joining the #DeleteFacebook movement — "Like us on Facebook."

Shares of Facebook, which were up about 2% when the hearing began, moved even higher as Zuckerberg addressed questions from senators.

The stock was up nearly 5% by 3:20 p.m. ET, a sign that investors seemed to be impressed with Zuckerberg's answers — and maybe a little less concerned that more federal regulations would be imposed on it and rival tech companies.