Maricopa County, Arizona, officials said that tabulating machines at about a fifth of their 223 voting locations were rejecting ballots as voting got underway on Election Day.

According to county officials, the problem related to passwords being entered too many times, activating built-in security features. By 10 a.m. local time, county officials said the problems were being addressed and that they did not anticipate delays in voting.

“We’ve got about 20% of the locations out there where there’s an issue with the tabulator where some of the ballots, after people have voted them, they try and run them through the tabulator and they’re not going through,” said Bill Gates, chair of the county’s Board of Supervisors.

Gates said the elections division was working to fix the problem, but that in the meantime voters could put ballots that aren’t properly read into a secure box on the tabulator machine.

Gates said that bipartisan teams will bring the ballots to the county’s election center, where they will be counted after the polls close at 7 p.m. local time.

“No one is being disenfranchised. And none of this indicates any fraud or anything of that sort. This is a technical issue,” said Gates.

The tabulator problems blew up on social media and right-wing media after a post showing an election worker in the Phoenix suburb of Anthem explaining the problem to voters. Figures like Donald Trump Jr., among others, reposted tweets raising concerns about problems in Arizona and in some cases suggesting it meant that the election might be “stolen.”

Stephen Richer, the Maricopa County recorder, expressed disappointment rather than surprise at the notion the problems were being misrepresented in such a fashion.

“Obviously, some people will exploit it for that purpose,” Richer said. "We’re very concerned about that.”

A county spokeswoman added that the poll worker featured in the viral video did what they were supposed to. “That poll worker at Anthem was doing their job, providing voters the information they need to participate in this election, and the options they have. He was calm and transparent,” said Megan Gilbertson of the county’s election department.

In a public appearance at a political event in Suffolk County, New York gubernatorial hopeful Rep. Lee Zeldin talked about his plans to tackle crime in the state and how his approach differs from that of his competitor, Gov. Kathy Hochul.

Zeldin took a shot at his competitor, saying that her campaign is solely for re-election while he runs on issues.

“It’s really only been in the last few days that, all of a sudden, (Hochul) says that now she has a plan to fight crime,” Zeldin said, according to WCBS. “But, then, she followed it up with trying to ridicule New Yorkers who want to lock up criminals, saying that it’s a conspiracy, that it’s data denying. And she’s kept digging deeper and deeper a hole over the last couple of weeks."

He encouraged young Republicans who might eye public office in the future to stay true to themselves.

Zeldin said his ideas will ensure the state government rolls back pro-criminal laws, holds district attorneys responsible if they refuse to enforce the law, and back New Yorkers in law enforcement, he said.

“(New York City Mayor Eric Adams) says that he wants judges to have discretion. He’s right. ... We need district attorneys doing their job, we don’t have a recall in this state — but, what we do have, is the New York State Constitution says that a governor can remove a DA who refuses to enforce the law. I pledge that on the first day that I’m in office, I’m going to tell the Manhattan District Attorney Alvin Bragg that he’s being removed for his refusal to enforce the law.”

It’s Election Day in America. Here’s everything you need to know about when polls close and how to watch CNN’s special coverage.

CNN’s Election Night in America Special Coverage will stream live started at 9 a.m. ET on today and will run through midnight ET on Thursday, Nov. 10, without requiring a cable log-in via CNN.com and CNN OTT and mobile apps under “TV Channels,” or CNNgo where available.

CNN’s decision desk will be monitoring results and will make projections accordingly. 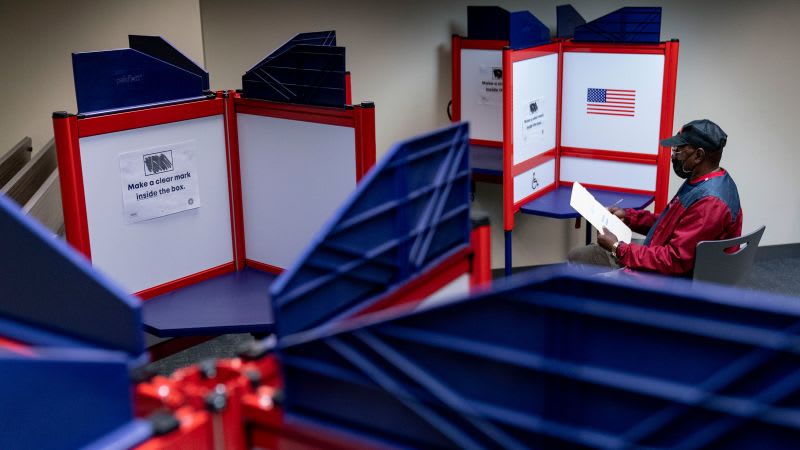 How to follow election night in America | CNN Politics

As America heads to the polls, voters have been receiving election stickers after casting their ballots.

Check out these images showing a variety of election stickers around the country.

Florida officials warned the US Justice Department that federal election monitors are not allowed inside polling places under state law, pushing back against federal plans for monitors in the state.

In a letter to DOJ dated Monday, Florida state elections officials argued that federal officials are not included on the list of people allowed inside polling places, and even if they did qualify, it “would be counterproductive and could potentially undermine confidence in the election.”

But the department did “not detail the need for federal monitors in these counties,” Florida Department of State General Counsel Brad McVay wrote to DOJ in the letter.

The Florida Department of State will send its own monitors to the three jurisdictions, according to the letter, to “ensure that there is no interference with the voting process.”

Florida Secretary of State Cord Byrd, an appointee of Republican Gov. Ron DeSantis, who is running for reelection, told reporters Tuesday morning that the request by DOJ to go inside polling places was a deviation from years past when the agency sent monitors to Florida. The DOJ under former President Donald Trump sent monitors to six Florida counties in 2020, but Byrd said they kept tabs from outside the polling location.

“This is not to be confrontational in any way,” Byrd said. “They sent a letter to the counties asking for permission to be in the polling places. We told them that under state law, that is not permitted, and we asked them to respect state law, and that they can go there and do their job, but they have to do that job outside of the polling place.”

Asked why the state didn’t send a similar letter in 2020 when Trump’s DOJ monitored six Florida counties, Byrd said there was no change in policy.

The Justice Department told CNN it has received the letter but declined to comment.

"Yes, I did," Trump told reporters when asked if he cast a ballot for DeSantis outside a polling location in Palm Beach where he voted.

"I think we're going to have a very great night and it's exciting," he added.

Trump cast his ballot shortly after 11:30 a.m. ET at the Morton and Barbara Mandel Recreation Center in Palm Beach, just minutes away from his Mar-a-Lago estate where he plans to watch election returns this evening with dozens of aides, allies, and local Republicans. He arrived with former first lady Melania Trump and briefly took questions outside after voting indoors.

The former president's political future may largely depend on Tuesday's midterm outcomes, as he looks for his handpicked and endorsed candidates in key federal and statewide races to prevail. Major losses for Trump-backed candidates could create obstacles for his 2024 presidential campaign, which Trump is eyeing to announce one week from today.

At a rally in Pennsylvania on Saturday, Trump referred to the Florida governor as “Ron DeSanctimonious.”

Attorney Lin Wood tells CNN he will appear before the special grand jury that is investigating efforts by former President Donald Trump and his allies to overturn the 2020 election in Georgia as a material witness tomorrow morning.

The Special Purpose Grand Jury that is being led by Fulton County District Attorney Fani Willis returns tomorrow after taking a roughly one-month hiatus around the election.

Wood, a staunch Trump supporter, is a veteran defense attorney who focused on civil litigation and has worked on high-profile cases in the Atlanta-area.

He pushed a series of cases after the 2020 Presidential election that were rapidly dismissed by the courts, and described as disinformation by state election officials.

Investigators are also interested in hearing from Wood about a meeting he held at his South Carolina home with other supporters of the former president working on election challenges after the 2020 election.

CNN has reached out to the Fulton County DA for comment.

You might hear that word — "wave" — thrown around this week if Republicans take some power from Democrats on Election Day. They'll argue they have been given a mandate from American voters.

Republicans could seriously underperform their potential, considering President Biden's approval rating and the historical precedent, and still pick up five seats and the House majority.

Is that a wave? Power will have changed dramatically. But it feels closer to a course correction than a major change in government. Here's a full list of House majority changessince the start of the modern party system just before the Civil War.

Sean Trende of RealClearPolitics and the American Enterprise Institute argued back in 2018, just before Democrats reclaimed the House from Republicans, that it's a wave election if there is "a sharp, unusually large shift in the national balance of power, across multiple levels of government." You'd need GOP victories in multiple governor's races and a Senate majority to make the change in power be reflected across multiple levels of government.

Trende added some statistical criteria to argue an election is a wave election if it is outside the shift in power during an election. It might be easier to put a round number as a baseline and argue a swing of 50 or more House seats is a wave.

By the 50-seat rule, the 2010 midterm election was certainly a Tea Party wave with a change of 64 seats in the House. The 1994 Republican revolution was a wave when the GOP gained 54 seats.

The 2006 midterm where Democrats gained the majority with a 32-seat gain would not be a wave, even though it made Nancy Pelosi speaker of the House and gave Democrats a Senate majority. Trende argued 2006 could be viewed as a wave in conjunction with 2008, when Democrats gained an additional 21 seats in the House.

But the 2018 midterm, when there was a 42-seat change, would not have been a wave, even though it restored Pelosi as House speaker. In any event, with this year's election, Republicans seem poised to once again take back control of the House.

While the White House is bracing for possible Election Day loses, Vice President Kamala Harris woke up this morning in rainy Los Angeles after telling a groups of organizers Monday night that Democrats would “see victory.”

Harris started Tuesday with her normal routine, a senior Harris adviser tells CNN, maintaining her daily morning workout and attending her normal meetings, which means receiving some form of the president’s daily briefing while in Los Angeles.

The vice president will receive regular updates on election news throughout the day from a host of staff in California, the Executive Building in DC, while aides stay connected with officials at the Democratic National Committee and the Democratic Congressional Campaign Committee and other Democratic Party officials who track midterms results closely.

Aides are also actively discussing if and how Harris could make an in-person and public Election Day stop somewhere in L.A., but are cognizant of how the vice president’s large footprint could impede ground organizers during crucial voting hours.

The vice president and second gentleman voted by filling out mail-in-ballots, which Emhoff said he would drop off after a rally on Monday.

In the evening, Harris will watch the returns come in, but her location to watch return remains in flux and aides would not disclose exactly what the options are.