NATO summit: World leaders, including US President Donald Trump, wrapped up a two-day summit in London to mark the alliance's 70th anniversary.

Clashing with friends: Trump started Tuesday by slamming his French counterpart over comments last month that NATO faced a "brain death" caused by US indifference to the transatlantic alliance. The second day was overshadowed by a video apparently showing Canadian PM Justin Trudeau and other world leaders joking about Trump.

After making his feelings clear on Trudeau, Trump also clarified what he would be doing this afternoon. And it's unlikely to be another press conference.

The President said he would be having a meeting with "the 2% people" and then "another meeting with Denmark and then we'll probably go directly back to Washington."

The White House has not responded to requests for clarification on the status of this event.

The US President did not mince his words when asked about footage of Canadian Prime Minister Justin Trudeau apparently making jokes at his expense went viral overnight.

Trump's first public reaction showed he was unhappy with that video surfacing, responding to a reporter's question by calling Trudeau "two-faced."

Trump continued: "The truth is I called him out on the fact that he's not paying 2% and I guess he's not very happy about it," Trump said adding "he should be paying 2% and that Canada "has money."

"I can imagine he's not that happy but that's the way it is.

Watch the moment below:

The US President praised Turkey’s intervention in Syria Wednesday.

“The border and the safe zone is working out very well and I give Turkey a lot of credit for that. The ceasefire is holding," Trump said.

He was responding to a question at the NATO summit about his meeting with Turkey’s President Recep Tayyip Erdogan, who sent troops into Kurdish-controlled regions of Syria after Trump withdrew US forces.

“That border is a mess for a long time,” he said, adding: “We have soldiers where the oil is and that’s the way I like it.”

The US President is speaking to reporters as he sits down for a bilat with German Chancellor Angela Merkel.

US President Donald Trump will shortly sit down for a bilateral meeting with German Chancellor Angela Merkel.

Trump and Merkel have long butted heads over a number of issues, and notably, Trump has pressed Germany to contribute more to defense spending as part of its commitment to NATO. Last month, Germany said it would reach the 2% spending target by 2031 -- seven years past NATO's goal date.

During last year's summit, Merkel hit back at Trump's claim that "Germany is a captive of Russia" by drawing on her own upbringing in Soviet-controlled East Germany, saying that she's "very happy that we are today unified in freedom as the Federal Republic of Germany."

Boris Johnson will not be attending this afternoon's lunch with Trump and other NATO 2%-ers, CNN's Betsy Klein reports.

Trump's working lunch on Wednesday is only for NATO countries who are fulfilling their 2% defense commitment. The UK foreign minister will attend the luncheon in Johnson's place, who has other NATO commitments, Klein adds.

A readout from deputy press secretary Hogan Gidley said the leaders "affirmed the importance of the Special Relationship between the United Kingdom and the United States and discussed their priorities ahead of today’s NATO Leaders Meeting."

The pair also spoke about trade and security, according to the readout.

President Trump held official meetings with two foreign leaders and the head of NATO at the alliance summit Tuesday -- turning the public portion of each sessions into his own highly dishonest impromptu press conference.

Trump treated NATO Secretary General Jens Stoltenberg, French President Emmanuel Macron and Canadian Prime Minister Justin Trudeau to a selection of his favorite fictions, most of which we have fact-checked before, and sprinkled in some new nonsense for good measure.

Our initial count: Speaking to reporters for more than two hours in total, Trump made at least 21 false claims. The total may well grow once we have time to do some deeper fact-checking.

Trump repeatedly said, for example, that NATO members are "delinquent" for failing to meet the alliance's guideline of having each member spend 2% of their Gross Domestic Product on defense. The guideline does not impose binding financial obligations or debts, and NATO's 2014 agreement says that members will work to meet the target within a decade, not that they must hit it immediately. 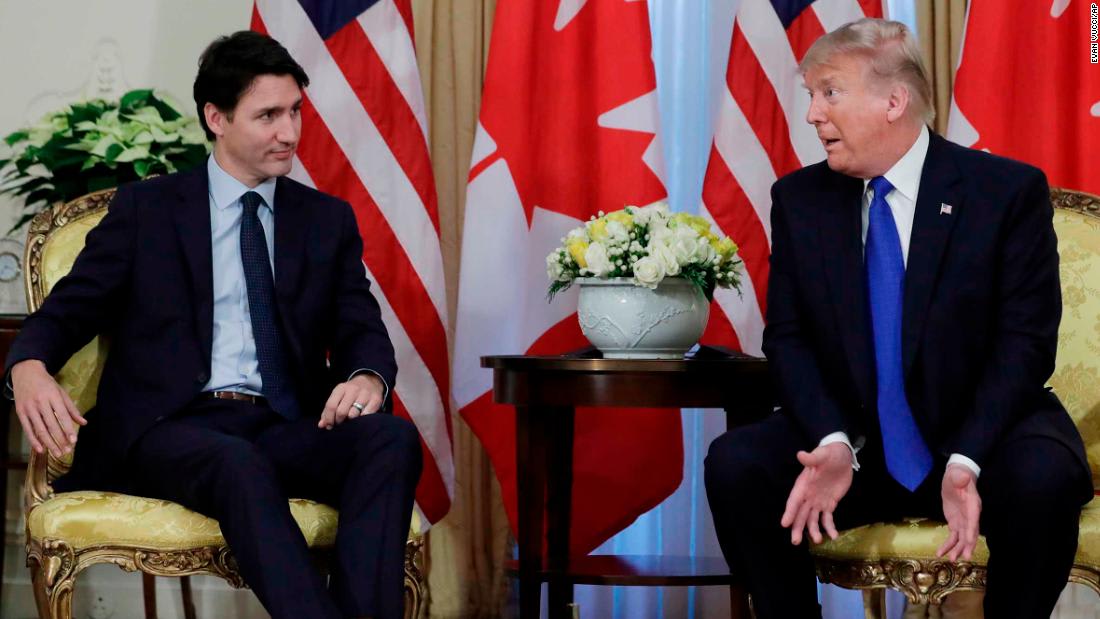 World leaders are now in a closed-door session for the next hour or so. But here's a look at what's coming up for the US President.

He is scheduled to hold meetings Wednesday with:

He's also expected to take part in a working lunch with representatives of Estonia, Greece, Latvia, Poland, Romania, Lithuania, Bulgaria and the UK.

One of the big talking points from yesterday was that fact that despite no official press conferences being scheduled, Trump spoke to reporters for more than two hours. However, the President is expected to give a press conference before flying back to Washington later.

Trump's timekeeping appears to be a topic of conversation throughout this summit.

Microphones nearby only pick up snippets of the conversations, which starts with Johnson asking Macron why he was late.

Macron's response is inaudible but he can be seen nodding as Trudeau says, "He was late because he takes a ... 40-minute press conference at the top."

While Trump was not mentioned by name, he is the only leader to have held a presser for that length of time, according to CNN's Special Events team covering the summit.

CNN has reached out to representatives for all the leaders who were part of the conversation.

When asked if the leaders were talking about Trump, a spokesperson for Dutch Prime Minister Mark Rutte told CNN on Wednesday they do not comment on closed door sessions. A Elysee Palace spokeswoman declined to comment, adding, "This video does not say anything special.” Meanwhile, a spokesman for Trudeau told CNN they have no comment at this time.

None of the leaders seemed to be aware that the conversation was being recorded, although they were talking openly and loudly enough to be heard by others. The Canadian Broadcasting Corporation first reported on the footage.