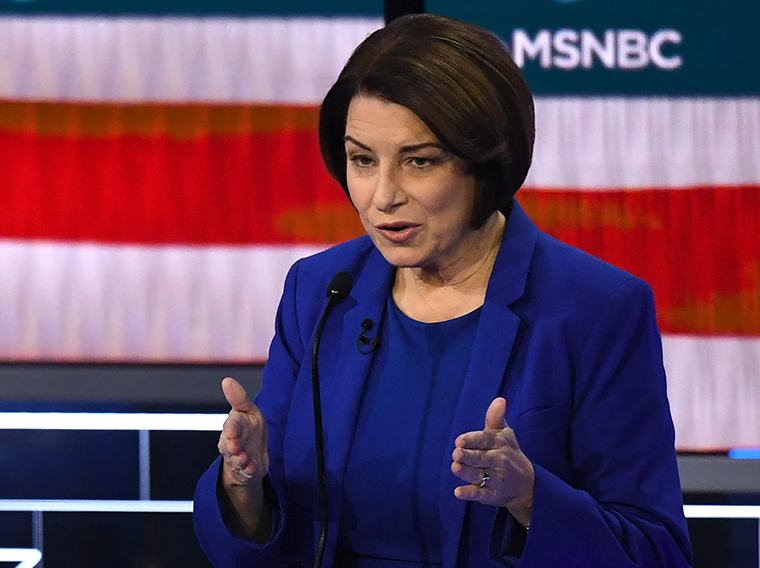 As she has in prior debates, Minnesota Sen. Amy Klobuchar asserted Wednesday that she’s won elections in Republican-held areas.

“I’m the one on this stage that had the highest voter turnout of any state in the country when I led the ticket, as well as bringing in rural and suburban voters. And I’ve done that as well,” she said. “And I’m the only one with the receipts to have done that in Republican congressional districts over and over again.”

Facts first: Partly true. Minnesota had the highest voter turnout rate of any state during each of her Senate campaigns, but Klobuchar is not the only candidate who has won Republican-held congressional districts

Former Vice President Joe Biden, who spent most of his career as the senator for Delaware, won in Republican congressional districts.

Biden first won the 1972 election to be senator from Delaware and was repeatedly re-elected to serve in that position by considerable margins until he became vice president in 2009. During that time, Delaware’s sole congressional district was held by Republicans from 1973 to 1983, and from 1993 to 2011.

Turnout was highest in Minnesota in years when Klobuchar ran. In her three election years, Minnesota had the highest state voter turnout nationwide.

Former Vice President Joe Biden said that, as mayor of New York, Michael Bloomberg had “stop and frisk – throwing close to five million young black men up against a wall.”

Facts First: There were approximately 5 million total "stop and frisk" stops during Bloomberg's tenure as mayor between 2002 and 2013, but Biden was inaccurate when he said that this was the number of young black men stopped. Of about 5.08 million total stops under Bloomberg, about half, approximately 2.6 million stops, were of black people -- men and women of all ages, according to police data compiled by the New York Civil Liberties Union.

Some more context: Bloomberg advocated stop and frisk even after a federal judge ruled in 2013 that the way New York was using stop and frisk was unconstitutional.

He began apologizing for stop and frisk in November 2019, the month he launched his presidential campaign, saying he only belatedly realized that too many innocent people were being harmed. However, his account of what happened has left out important information.

Each of the six candidates gave a closing statement to wrap up tonight's debate, the last one before the Nevada caucus.

He started his statement, saying, "I'm running because so many people are..."

That's when protesters in the audience began screaming, while others clapped and cheered. The moderator quickly interjected and said they were clearing the room.

With such a crowded field, there is a real possibility that Democrats will go to their summer convention in Milwaukee with none of the candidates having clinched the nomination.

For five of the six candidates onstage tonight, the answer was to roll the dice, perhaps allow superdelegates in on a second ballot and, as a couple put it, "let the process play out."

Michael Bloomberg, Elizabeth Warren, Joe Biden, Pete Buttigieg and Amy Klobuchar all said that a candidate with a plurality of delegates should not automatically be handed the nomination.

The lone dissenter: Bernie Sanders, who said that whomever wins the most, even if that means they come up short of a majority, should win the nomination.

“The mayor said, when we passed it, the signature piece of this administration, it's a disgrace,” Biden said. “They're the exact words. It was a disgrace. Look it up, check it out, it was a disgrace.”

Facts first: This is true.

Bloomberg did call the final Obamacare bill “a disgrace” during a July 2010 event at Dartmouth College, just months after the law’s passage. Bloomberg added that the law did "absolutely nothing to fix the big health care problems" calling it just "another program that's going to cost a lot more money."

Bloomberg defended himself at the debate, saying, “I was in favor of it. I thought it didn't go as far as we should,” comments his campaign also made to CNN’s KFile on Sunday. His campaign pointed to comments he made in 2013 on a radio program after the bill’s passage as a sign of his support. “Congress passed this, so let's try it at least,” Bloomberg said.

Sen. Bernie Sanders and former New York City Mayor Michael Bloomberg got into a heated debate tonight over who owns the most homes and where.

Bloomberg kicked off the discussion with a shot at Sanders, calling him the "best known socialist in the country happens to be a millionaire with three houses. What did I miss?"

"I work in Washington, house one. I live in Burlington, house two. And like thousands of other Vermonters, I have a summer camp. Forgive me for that. Where is your home? Which tax haven do you have your home?" Sanders said.

Bloomberg fired back: "New York City, thank you very much. And I pay all my taxes. And I'm happy to do it because I get something for it."