The New Hampshire primary is over and Sen. Bernie Sanders has been named the victor with 26% of the vote with 94% of precincts reporting.

A lot happened tonight. Catch up on the crucial takeaways below:

Combined with Iowa delegates, Buttigieg now has a total of 23, Sanders has 21 and Klobuchar has 7.

Sen. Bernie Sanders has won the New Hampshire primary, CNN projects, clearing a key hurdle as the race moves to Nevada and South Carolina in the coming weeks.

His victory tonight came a little more than a week after the Iowa caucuses were thrown into chaos by a failure of the state party’s vote-counting systems.

This time around, the results were clear – and Sanders supporters at his headquarters in Manchester were free to celebrate without reservation.

Former South Bend, Indiana, Mayor Pete Buttigieg, who rose in the polls here after battling Sanders to a virtual tie in Iowa, ultimately fell short in his efforts to knock Sanders off course.

Sanders won the 2016 primary here by a much larger margin, but in 2020 faced a much wider and varied field.

Buttigieg’s solid showing and a late surge from Sen. Amy Klobuchar highlighted both the strength and continued indecision of the party’s moderate wing, who have not yet coalesced around alternative to the front-running Sanders. Sen. Elizabeth Warren’s campaign, which appears to be caught in a no-man’s land between Democrats’ ideological bases, will now face more serious questions about her path to the nomination.

Bernie Sanders took to the stage in New Hampshire and declared victory thanks to his volunteers -- with a nod to his strong showing in Iowa last week.

Sanders also thanked his opponents early on in the speech, a shift away from the more negative tone that settled over the Democratic primary field ahead of Tuesday's caucuses.

"Tonight I want to take my opportunity to express my appreciation and respect for all of the candidates we ran against: Pete Buttigieg, Amy Klobuchar, Elizabeth Warren, Joe Biden, and what I can tell you, with absolute certainty and I know I speak for every one of the Democratic candidates is that no matter who wins, and we certainly hope it’s going to be us, we are going to unite together and we are going to defeat the most dangerous president in modern history," Sanders told the crowd.

Pete Buttigieg is addressing supporters in Nashua, New Hampshire, saying he admired his competitor Sen. Bernie Sanders when he was in high school.

"I admired Sen. Sanders when I was a high school student. I respect him greatly to this day, and I congratulate him on his strong showing tonight.

The race in New Hampshire is still too close to call. With 82% of precincts reporting, Sanders maintains a slight lead with 26% of the vote in New Hampshire. Buttigieg is close behind with 24.3%.

With 82% of precincts reporting, Sen. Bernie Sanders maintains his lead with 26% of the vote in New Hampshire with former Mayor Peter Buttigieg close behind with 24.3%. 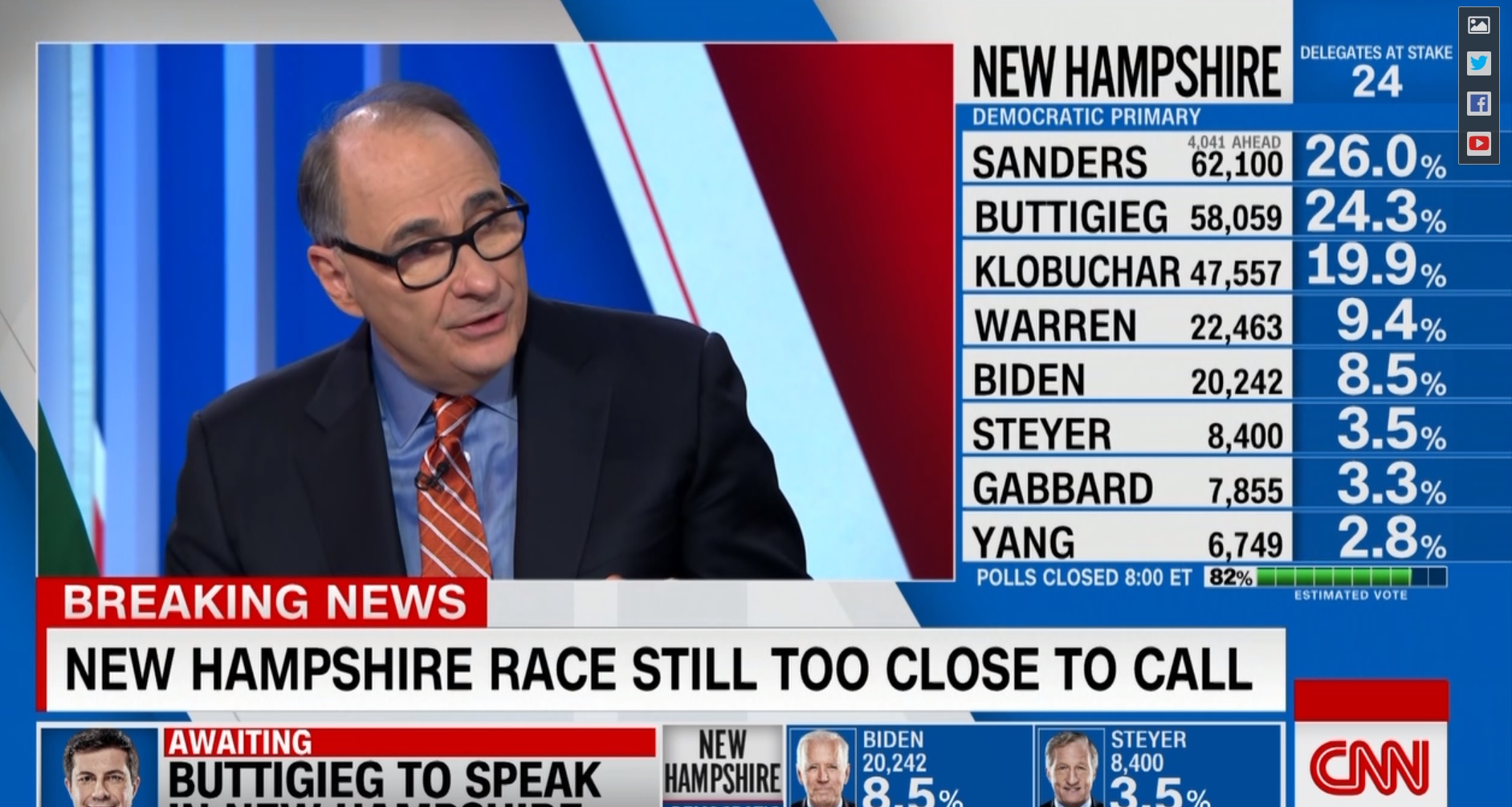 As returns come in, the Pete Buttigieg campaign has their eyes on the suburbs, a source says.

This source says they are “feeling generally good.”

“This was Bernie’s backyard, spent more money than anyone, won with 60 in four years. And we’re right there," the source said.

The gap between Sanders and Buttigieg continues to narrow with 70% of precincts reporting in New Hampshire.

There are 24 total delegates at stake in New Hampshire, meaning there are three left.

The gap between Sen. Bernie Sanders and former mayor Pete Buttigieg continues to narrow with 70% of precincts reporting in New Hampshire. 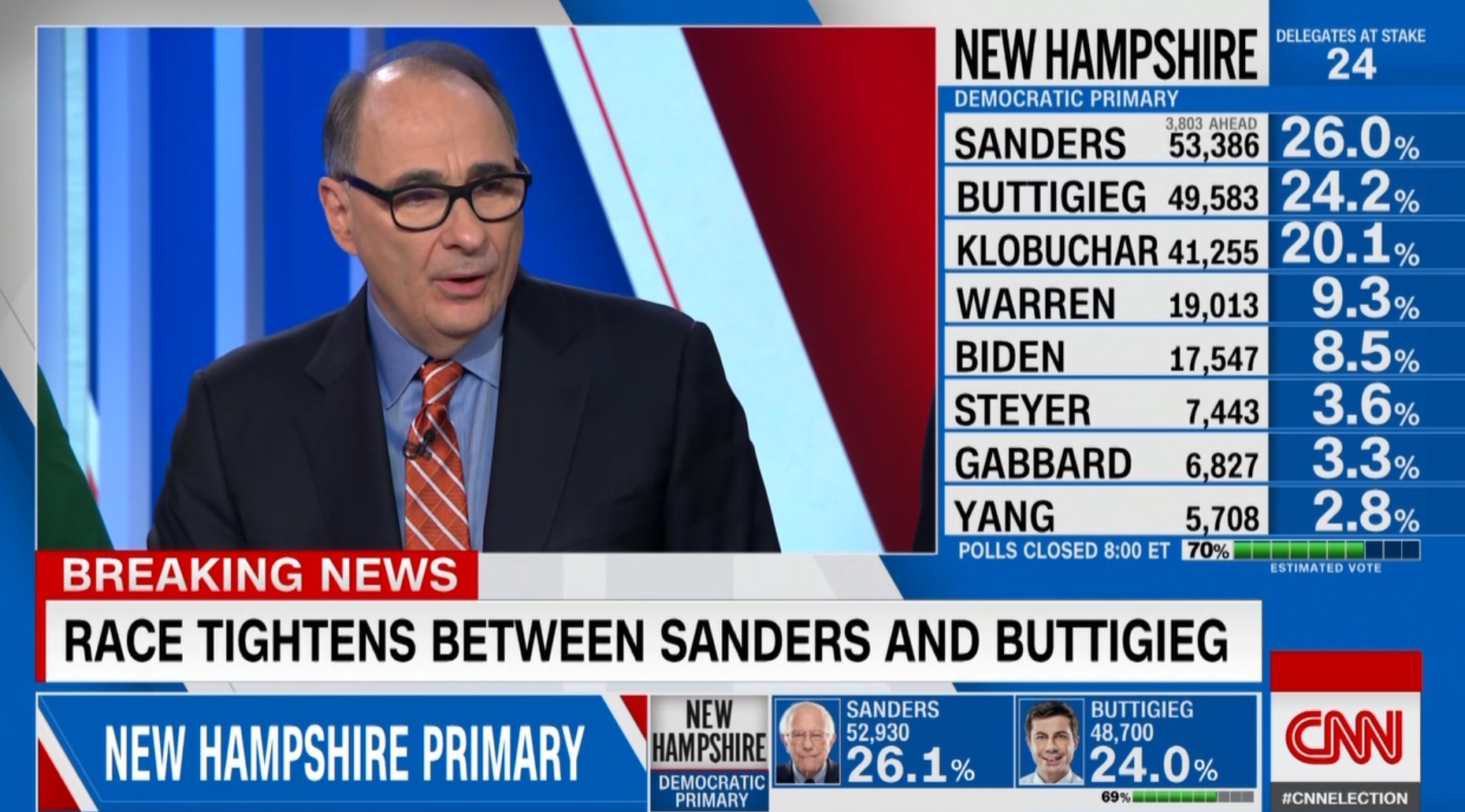