In perhaps a sign of things to come, President’s Trump’s first answer — which was meant to state how he would lead during the next stage of the coronavirus — relied instead on looking backward and wishful thinking about a vaccine.

As he does nearly every time he is pressed on his pandemic response, Trump cited his decision to close travel to China, though thousands of people were exempt and were still able to enter the country. He insisted the United States was suffering alongside Europe, which is also experiencing new spikes. But unlike Trump, leaders there — including French President Emmanuel Macron — have imposed new lockdowns.

And he placed nearly all of his optimism on a vaccine, which he claimed would arrive “within weeks.” There is no indication that is true; vaccine trials are still underway and the Food and Drug Administration has imposed rules requiring months of data for emergency use of a new vaccine. Later, Trump acknowledged his promise of a vaccine “within weeks” was not a “guarantee.” But he said he was hopeful for one by the end of the year.

His answers were a sign that Trump doesn’t plan to change his approach to coronavirus, even as cases surge. He said as much earlier this week; in a town hall event, Trump responded when asked what he would do differently: “Not much.”

This is how the question played out:

Democratic presidential nominee Joe Biden opened the final general election debate on Thursday by arguing President Donald Trump’s handling of the coronavirus pandemic in the United States should guarantee he is voted out of office in November.

Biden contrasted Trump’s handling of the virus to what he says his own would be: A focus on pushing people to wear masks and more rapid testing for the virus.

“I would make sure that we set up national standards as to how to open up schools and open up businesses so they can be safe and give them the wherewithal, the financial resources to be able to do that,” Biden said.

The former vice president also warned that the worst of the virus could be yet to come, saying the country is about to “go into a dark winter” and Trump “has no clear plan and there’s no prospect that there’s going to be a vaccine available for the majority of the American people before the middle of next year.”

Coronavirus has dominated the general election, with voters telling pollsters and reporters that it is the most important issue on their minds as they consider who to vote for in November.

President Trump has in recent months lambasted China over the coronavirus pandemic, but he praised Chinese leader Xi Jinping’s handling of the deadly disease for months at the beginning of the outbreak.

As cases of Covid-19 first began to appear in the United States, Trump spoke highly of Xi’s handling of the outbreak in China and repeatedly said the US was in close coordination with Beijing on the matter.

Hundreds of US deaths later, Trump’s attitude toward Beijing began to change.

“I’m a little upset with China, I’ll be honest with you, because as much as I like President Xi and as much as I respect the country and admire the country — I have great admiration for the country, what they’ve done in a short period of time. … But they should have told us about this,” he said on March 22.

Yet even as cases skyrocketed in the US and Trump’s ire with China grew, he directed his actions not at Beijing but at the World Health Organization.

Trump said he was halting funding to the organization in mid-April and announced his intention to withdraw from the WHO in May after he said it "failed to make the requested and greatly needed reforms."

Trump had denounced the US' contribution to the WHO — $400-500 million — in comparison to China's and consistently accused the organization of aiding China in allegedly covering up the origins of the virus and allowing its spread. In July, he officially initiated the US withdrawal from the WHO, which will be complete next July.

Trump said last week that he could not say when he had last spoken to his Chinese counterpart.

“I have not spoken to him in a while because I don’t want to speak to him,” he said.

The first question of tonight's debate is about the coronavirus pandemic, which has become a pivotal issue of the 2020 election.

Here are key facts you need to know:

Here's where new cases are rising across the US in comparison to the previous week: 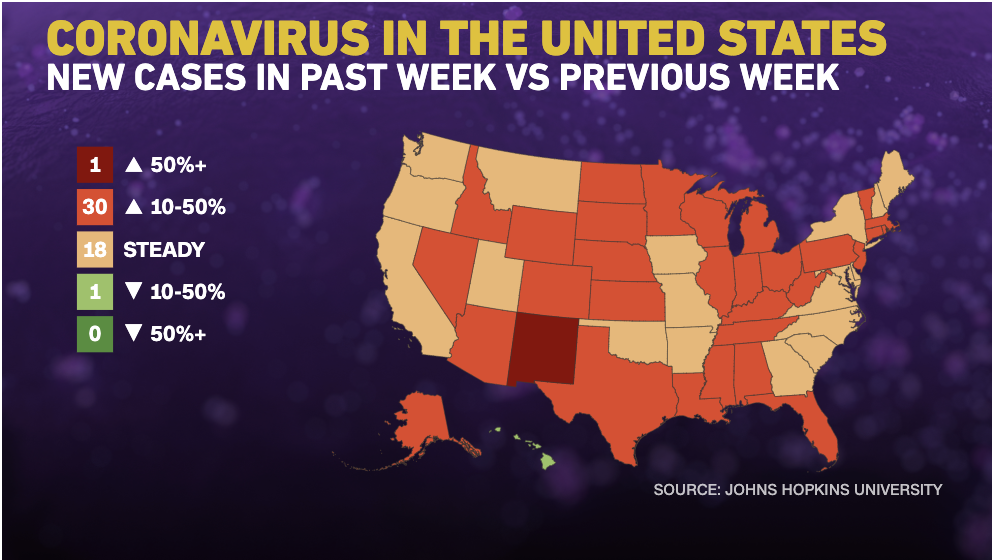 Trump enters the debate in need of a major shakeup that will change the trajectory of the race as he trails Biden in both national polls and key swing states that will determine whether he has a path to victory in the Electoral College.

With just 12 days to go before Election Day, Trump has been campaigning across the country with grievance-laden rallies, lashing out at his advisers and medical experts, blaming China for the spread of coronavirus and refusing to take any blame for his poor handling of the pandemic, which has created a huge drag on his poll numbers.

Biden currently has a larger lead in national polls than Hillary Clinton did at this point in 2016. In CNN's Poll of Polls, Biden is leading Trump by 10 points nationally and he is also showing considerable strength in the key battleground states of Pennsylvania, Michigan and Wisconsin where Trump won by narrow margins in 2016.

Melania Trump has entered the debate hall and is wearing a mask.

Her attendance marks a shift from Tuesday, when, citing an "abundance of caution" and a "lingering cough" after her bout with Covid-19, Trump backed out of a planned appearance with her husband to introduce him at a Pennsylvania rally.

One voter says she's looking get some more specifics tonight before making a decision.

"I haven't gotten specifics that tell me that there is a candidate among them who has the will and the wherewithal and the temperament to do what's right for our country," she said.

Another voter is split between voting on policy issues or election fairness.

"Well, I really oppose abortion. But I'm concerned that President trump is a threat to the fairness of elections, so I'm really torn," he said.

We'll check in with these voters at the end of the debate to get their reaction and ask them if they've made a decision.

Hear what the voters had to say:

Win or lose, tonight is President Donald Trump’s final appearance ever on a presidential debate stage.

His methods haven’t changed much since his first time out in a primary debate in 2015 — when he sparred with moderator Megyn Kelly and later made sexist attacks on her. He still enters the sessions relying primarily on his instincts as a brawler and doesn’t prepare nearly as much as his adversaries.

He held a brief and informal session earlier on Thursday with some of his team, but did not conduct a full mock debate before tonight.

That has been his practice for most of his relatively brief debating career. Trump has preferred more ad-hoc sessions, with advisers peppering him with questions during down moments, than a full dress rehearsal.

He’s had some hits and misses along the way. Some of his general election debates in 2016, and particularly his final one against Hillary Clinton, were viewed by his team as a success.

After that first debate with a large GOP primary field in 2015, many Republicans wondered how much longer they would have to contend with his outbursts and behavior.

Five years later, those traits — and those concerns — are as present as ever.