Our live coverage has ended. Read more about the draft opinion in the posts below.

The Supreme Court confirmed the authenticity of the leaked document in a statement Tuesday.

"Yesterday, a news organization published a copy of a draft opinion in a pending case. Justices circulate draft opinions internally as a routine and essential part of the Court’s confidential deliberative work. Although the document described in yesterday’s reports is authentic, it does not represent a decision by the Court or the final position of any member on the issues in the case," the statement said.

Chief Justice Roberts called the leak a "singular and egregious breach of that trust that is an affront to the Court and the community of public servants who work here."

Roberts said he asked the Marshal of the Court to investigate.

To the extent this betrayal of the confidences of the Court was intended to undermine the integrity of our operations, it will not succeed. The work of the Court will not be affected in any way.
We at the Court are blessed to have a workforce – permanent employees and law clerks alike – intensely loyal to the institution and dedicated to the rule of law. Court employees have an exemplary and important tradition of respecting the confidentiality of the judicial process and upholding the trust of the Court. This was a singular and egregious breach of that trust that is an affront to the Court and the community of public servants who work here.
I have directed the Marshal of the Court to launch an investigation into the source of the leak.

Protesters descended on areas outside the Supreme Court overnight after the draft opinion was released, and have remained throughout the morning.

A spokesperson for the Metropolitan Police Department told CNN the department is activating its Civil Disturbance Unit to manage protests, but declined to specific how many officers or where they’d be deployed.

The United States Capitol Police said it is working with other agencies and adding additional officers to areas around the Supreme Court.

Demonstrations are planned throughout the day after hundreds turned out at the steps of the building.

Shut Down DC has advertised an event in the area to begin around 5 p.m. Other groups from New York to Houston have advertised protests via social media at municipal buildings, parks and other highly visible locations, such as the Barclays Center in Brooklyn, New York.

Democratic Senate Majority Leader Chuck Schumer said it’s “a dark and disturbing morning for America,” in the wake of the draft Supreme Court opinion obtained by Politico that would strike down Roe v. Wade.

He said, “The Republican-appointed justices reported votes to overturn Roe v. Wade will go down as an abomination. One of the worst, most damaging decisions in modern history.”

Schumer argued the blame for this reported decision falls on “every Republican senator who's supported Sen. [Mitch] McConnell and voted for Trump justices pretending that this day would never come.” He said they will now “have to explain themselves to the American people.”

Schumer said while this day has come, “we will fight it all the way.”

As the Supreme Court “is poised to strike down Roe,” Schumer said it’s his intention that the Senate will vote to codify the right to abortion into law. But in the split 50-50 Senate, there is currently no path forward to do that.

They added that it was designed to “intimidate and obstruct” the court’s work.

The lawmakers also call for an investigation into the leak and said House Republicans are “committed to upholding the sanctity of life, and we will continue to fight to be a voice for the truly voiceless.”

Senate Minority Leader Mitch McConnell released a statement focused on the leak of the SCOTUS draft opinion saying, the “stunning breach was an attack on the independence of the Supreme Court” and that the action should be “investigated and punished.”

“All nine Justices should tune out the bad-faith noise and feel totally free to do their jobs, following the facts and the law where they lead," he said.

Speaking on the Senate floor shortly after releasing the statement, McConnell called the leak "shocking" and said that "judicial independence is vital."

“Last night’s stunning breach was an attack on the independence of the Supreme Court. By every indication, this was yet another escalation in the radical left’s ongoing campaign to bully and intimidate federal judges and substitute mob rule for the rule of law.
“The disgraceful statements by President Biden, Speaker Pelosi, and Leader Schumer refuse to defend judicial independence and the rule of law and instead play into this toxic spectacle. Real leaders should defend the Court’s independence unconditionally.
“This lawless action should be investigated and punished as fully as possible. The Chief Justice must get to the bottom of it and the Department of Justice must pursue criminal charges if applicable.
“All nine Justices should tune out the bad-faith noise and feel totally free to do their jobs, following the facts and the law where they lead.”

Sen. Susan Collins, a Republican from Maine, called out Supreme Court Justices Neil Gorsuch and Brett Kavanaugh in a statement Tuesday after Politico published what it said is a draft opinion that would overturn Roe v. Wade.

“If this leaked draft opinion is the final decision and this reporting is accurate, it would be completely inconsistent with what Justice Gorsuch and Justice Kavanaugh said in their hearings and in our meetings in my office,” Collins said.

Asked on Tuesday by CNN's Manu Raju if she was misled by Kavanaugh, Collins says: “My statement speaks for itself.”

Some more context: Collins, a supporter of abortion rights who cast a critical vote to confirm Justice Brett Kavanaugh, said in an interview with CNN in 2019 that despite his vote in a recent abortion access case, she did not believe Kavanaugh would ultimately vote to overturn Roe v. Wade.

“I have always been concerned about preserving Roe v. Wade,” Collins said, adding that Kavanaugh had given her assurances during his confirmation process that the landmark opinion was safe.

“He said under oath many times, as well as to me personally many times, that he considers Roe to be ‘precedent upon precedent’ because it had been reaffirmed in the Casey v Planned Parenthood case,” Collins added, dismissing any criticism of her as partisan politics.

Here’s a look at the US Supreme Court case Roe v. Wade.

Case: 1971 — The case is filed by Norma McCorvey, known in court documents as Jane Roe, against Henry Wade, the district attorney of Dallas County, who enforced a Texas law that prohibited abortion, except to save a woman’s life.

Decision: January 22, 1973 — The US Supreme Court, in a 7-2 decision, affirms the legality of a woman’s right to have an abortion under the 14th Amendment to the Constitution. The court held that a woman’s right to an abortion fell within the right to privacy (recognized in Griswold v. Connecticut) protected by the 14th Amendment. The decision gave a woman the right to an abortion during the entirety of the pregnancy and defined different levels of state interest for regulating abortion in the second and third trimesters. The ruling affected laws in 46 states.

Full-text opinions by the justices can be viewed here.

And read more about the legal timeline here: 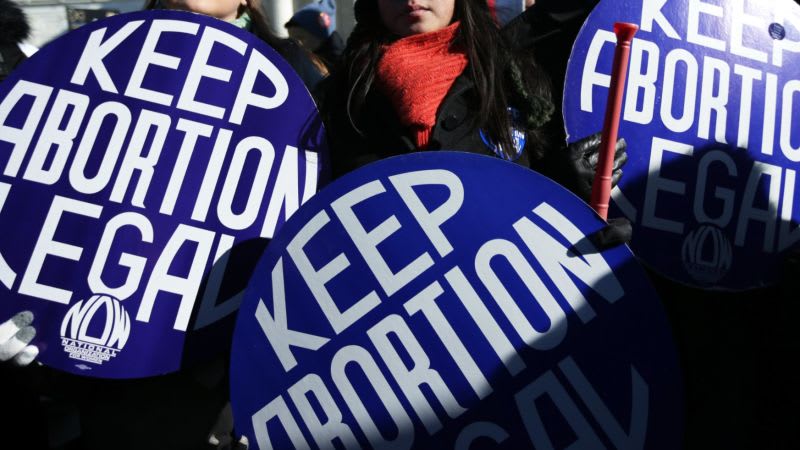 A reversal of Roe v. Wade would leave abortion policy up to individual states and would likely produce a patchwork system where the procedure would remain largely available in Democratic-led states, while Republican-led states would pass extreme limits or outright bans on it.

Here's how some governors reacted to Politico publishing what it called a draft of a majority opinion written by Justice Samuel Alito that would strike down Roe v. Wade.

“As a pro-choice governor, I am committed to upholding Roe v. Wade, which is why I am proud of the bipartisan bill headed to my desk this year that expands access. So long as I am governor, these health care services for women will remain safe and legal.”

"I am horrified by the apparent draft Supreme Court opinion leaked this evening that would overturn the right to abortion guaranteed by Roe v. Wade. For the sake of women across the country, this should not be the Supreme Court's final opinion when it comes to abortion rights."

"We have been fighting this battle for too long. I refuse to go backwards. I refuse to let my new granddaughter have to fight for the rights generations have fought for and won, rights that she should be guaranteed."

"For anyone who needs access to care, our state will welcome you with open arms. New York will always be a place where abortion rights are protected and where abortion is safe and accessible. Just as the Statue of Liberty lifts her lamp tall in our harbor, New York will never stop fighting for what's right — unafraid and undeterred."

President Biden said a woman’s right to have an abortion is “fundamental” in a statement after Politico published what it said is a draft opinion that would overturn Roe v. Wade.

In a statement released Tuesday morning, Biden said that while “we do not know whether this draft is genuine, or whether it reflects the final decision of the Court,” he wanted to make clear his administration’s stance on the cases before the Supreme Court.

Biden wrote his administration “argued strongly before the Court in defense of Roe v. Wade."

"We do not know whether this draft is genuine, or whether it reflects the final decision of the Court.
With that critical caveat, I want to be clear on three points about the cases before the Supreme Court.
First, my administration argued strongly before the Court in defense of Roe v. Wade. We said that Roe is based on “a long line of precedent recognizing ‘the Fourteenth Amendment’s concept of personal liberty’… against government interference with intensely personal decisions.” I believe that a woman’s right to choose is fundamental, Roe has been the law of the land for almost fifty years, and basic fairness and the stability of our law demand that it not be overturned.
Second, shortly after the enactment of Texas law SB 8 and other laws restricting women’s reproductive rights, I directed my Gender Policy Council and White House Counsel’s Office to prepare options for an Administration response to the continued attack on abortion and reproductive rights, under a variety of possible outcomes in the cases pending before the Supreme Court. We will be ready when any ruling is issued.
Third, if the Court does overturn Roe, it will fall on our nation’s elected officials at all levels of government to protect a woman’s right to choose. And it will fall on voters to elect pro-choice officials this November. At the federal level, we will need more pro-choice Senators and a pro-choice majority in the House to adopt legislation that codifies Roe, which I will work to pass and sign into law."

Biden has a complicated history with abortion, CNN's Kevin Liptak reported earlier Tuesday, going from a moderate position as a senator to more fully embracing the Democratic Party position when he ran for president. He has yet to say the word "abortion" during his presidency, a review of his public comments found.

This draft was circulated in early February, according to Politico. The final opinion has not been released and votes and language can change before opinions are formally released. The opinion in this case is not expected to be published until late June.

CNN has not independently confirmed the document's authenticity. Politico says it has authenticated the draft. A Supreme Court spokesperson declined to comment to CNN.