Michael Bloomberg’s campaign expects that Joe Biden’s post-South Carolina rise – and the negative impact it could have on the former New York mayor – could be clearest in Virginia, a Bloomberg aide tells CNN.

Bloomberg’s campaign, before Biden’s South Carolina win, saw Virginia as a place that they were competitive in. They had a sizable team on the ground, had spent nearly $18 million on TV and digital ads in Virginia and Bloomberg spent millions to help flip the commonwealth’s legislative bodies in 2018.

But then Biden ran away with South Carolina and, this aide argues, the tide began to turn.

The reason: The media attention and boost from the South Carolina win; a slew of endorsements, including from Virginia Sen. Tim Kaine and a host of the state’s congressional delegation; and the trio of top endorsements Biden received on Monday from Pete Buttigieg, Amy Klobuchar and Beto O’Rourke.

“Our operation is good there,” the aide said, “but if you think of Virginia as a state that became blue with Obama’s entrance, then it’s a breeding ground for Biden voters.”

Polls will soon start closing in some states voting today.

Here's where polls are closing at 7 p.m. ET:

One issue that's come up again and again in Democratic debates: Does the US economy work for everyone?

Almost half of Super Tuesday Democratic primary voters in Virginia think the system needs a complete overhaul, according to early exit polls, while around the same number said they think it needs minor changes and 1 in 10 said the economy works well as it is.

Voters responded similarly in Colorado, where around half said the economy needs an overhaul. Four in 10 there said it needs minor changes.

Read more on inequality in the US here.

Former New York Mayor Michael Bloomberg has spent $560 million on advertising, more than twice as much as any other candidate this election cycle, based on the latest figures released today by Kantar Media/CMAG. Almost half of that was in Super Tuesday states.

GOP Sen. Susan Collins, who is up for reelection in Maine, would not say on Tuesday if she voted for President Trump in her state's primary.

She twice declined to answer the question.

"I already answered that question," Collins told CNN when asked if she supported Trump's reelection bid.

Collins' spokesperson referred CNN to comments the senator made last Friday when she was asked if she is supporting Trump. But in that interview, she didn't directly answer when asked if she backed the President's 2020 bid.

"I have voted by absentee ballot, just to make sure that I voted," Collins told WCSH in Portland, Maine. "And I would note that it's on the Democratic side that there are eight candidates, and my likely opponent as well as the governor and many other Democratic officials have not said who they are going to choose in what is a contested Democratic ballot. I'm focused on my job and also on my own campaign, and I'm just not going to get involved in presidential politics."

A county judge has ruled that voting in Davidson County, which includes Nashville, will stay open beyond the 8 p.m. ET closing.

The judge has approved five "mega sites" extending voting until 11 p.m. ET, while other voting locations in the precinct will remain open until 9 p.m. ET.

The ruling came swiftly after a lawsuit was filed by the Democratic party and the four top campaigns (Joe Biden, Mike Bloomberg, Bernie Sanders and Elizabeth Warren) to extend voting after storm damage delayed opening of polls.

The party was just informed of the decision, according to communications director Emily Cupples.

Here's a look at the judge's order: 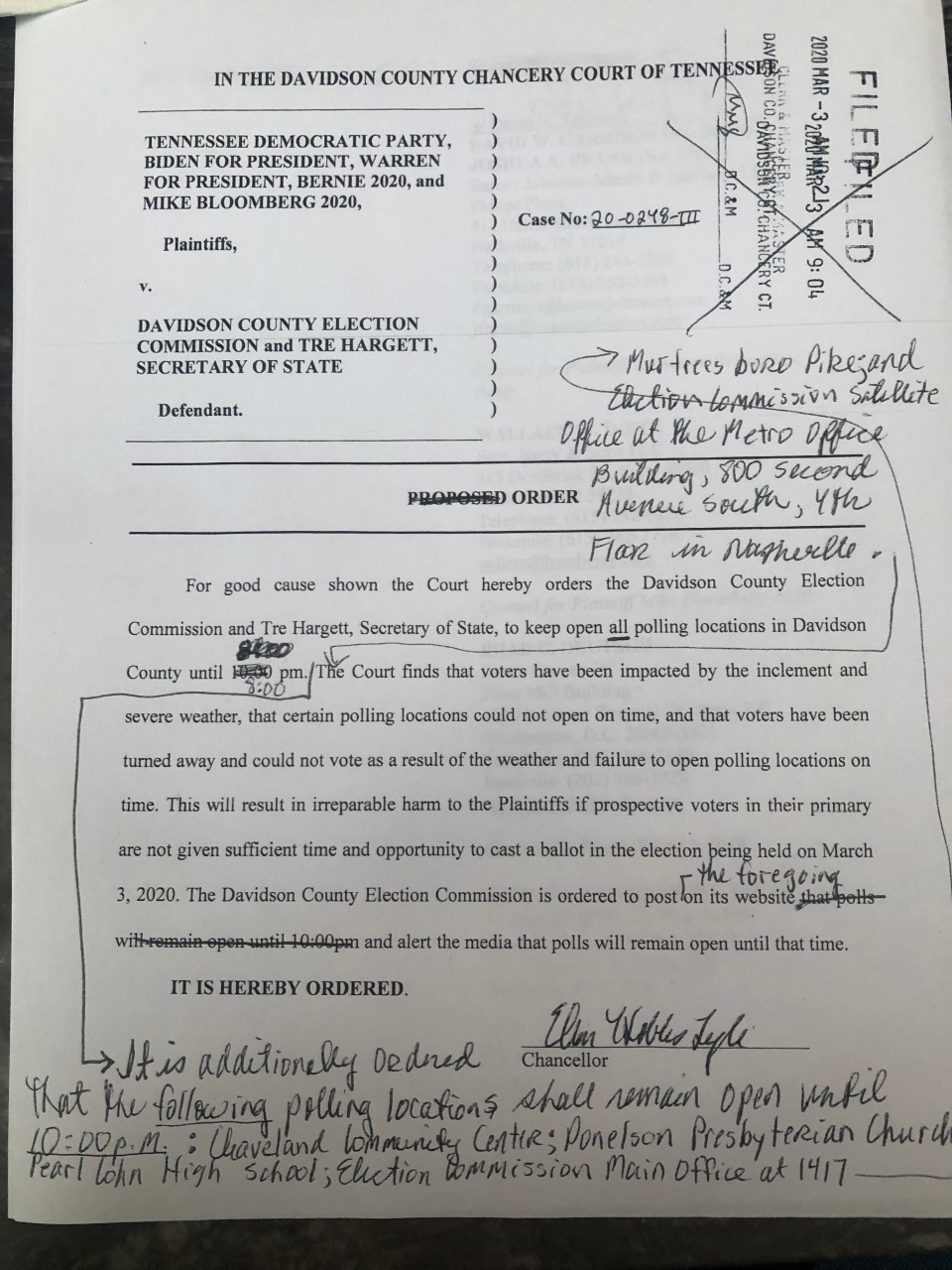 In two states where former Vice President Joe Biden hoped for a strong performance, Virginia and North Carolina, a quarter of the electorate is black, according to early Democratic primary exit polls, roughly the same as it was in the 2016 primary cycle.

Two thirds of voters in both states are white, less than 1 in 10 are Latino.

Around 2 in 10 voters identified as very liberal, while a third identified as somewhat liberal in both Virginia and North Carolina.

More voters in Virginia say they’re moderate, around 2 in 5, while 3 in 10 say so in North Carolina. Around 1 in 10 Democratic voters in both states identify as conservatives.

Health care was the most important issue to Democratic primary voters in Maine and Massachusetts, according to early exit polling from CNN.

Almost half of voters in Maine and 2 in 5 in Massachusetts said health care was the most important in deciding who to vote for, followed by around a quarter in both states for climate change and around 1 in 5 for income inequality.

While former Vice President Joe Biden has benefited from a series of endorsements from former presidential candidates as a sign the moderate lane is coalescing, Bernie Sanders' campaign signaled today not to expect a similar consolidation of the progressive lane —at least not any time soon.

The Sanders campaign is not making any effort to convince Elizabeth Warren to end her presidential bid, even though she and Sanders both come from the progressive wing of the Democratic Party and her exit and possibly even endorsement of Sanders could help Sanders’ hopes of winning the nomination.

Sanders campaign manager Faiz Shakir told CNN there have been no attempts by the Sanders campaign to reach out to Warren or her aides in an attempt to forge a partnership or convince her to get behind their campaign.

“She has been campaigning very hard, has raised a lot of money and has earned a lot of votes,” Shakir said. “She should be given the time and space to decide for herself about the future of her campaign.”