As of 10:35 p.m. ET, there are approximately 14,097 ballots still outstanding across Georgia, according to a statement by Secretary of State Brad Raffensperger.

Here's a breakdown of the ballots by county:

The next president of the US is yet to be called, but the coronavirus pandemic looms large.

The US reached a new record high of daily Covid-19 cases. So far today, there have been at least 121,054 daily new coronavirus cases in the US, per Johns Hopkins University data.

This is the highest single day reporting since the pandemic began.

Joe Biden attended a briefing on coronavirus earlier today in Wilmington, Delaware. The pandemic's impact has been a key issue of the campaign, and whichever candidate wins the presidency will have to lead the country through this crisis.

All remaining 4,200 uncounted mail-in ballots and provisional ballots cast in Clayton County, Georgia, will most likely be released by midnight, the director of the county's board of elections, Shauna Dozier, told CNN tonight.

Dozier said to expect results posted on the county's website roughly every 30 minutes until midnight.

The only remaining uncounted ballots will then be military ballots, which are due at 5 p.m. ET, on Friday. Dozier said she is unaware of how many military ballots officials may receive. 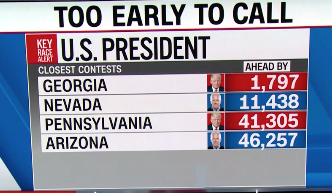 As the state’s presidential election results remain too close to call, the Democratic governor of Nevada has criticized President Trump’s claim Thursday that the election is being stolen from him.

“President Trump’s comments to the American people tonight on the election were misleading, dangerous, and – most concerningly – false,” Gov. Steve Sisolak said in a written statement.

Joe Biden led in Nevada by more than 11,000 votes Thursday night, with no further updates expected from the state until Friday.

Saying he had “utmost confidence” in his state’s election officials, Sisolak promised they would continue to make sure every vote is counted, regardless of the President’s statements.

“It was clear that the intent of his message was to undermine the public’s confidence in the integrity of our election processes and system, which in turn undermines one of the core pillars of our democracy,” Sisolak said.