"Karen and I send our love and prayers to our dear friends President @realDonaldTrump and @FLOTUS Melania Trump. We join millions across America praying for their full and swift recovery," Pence tweeted.

Pence was not in close contact with Hope Hicks, one of Trump's closest aides, top aide to the VP claims, citing how he's been on the road mostly this week. Hicks tested positive for the infection.

However, CNN's Betsy Klein noted that Pence is on camera saying he was in the Oval Office with the President on Tuesday.

Russian President Vladimir Putin on Friday sent President Trump a telegram to wish him and first lady Melania Trump a speedy recovery after they tested positive for Covid-19.

“I am sure that your inherent vitality, good spirits and optimism will help you cope with the dangerous virus,” the Russian president said, according to a Kremlin readout of the telegram.

Global markets and US stock futures were roiled on Friday by news that President Trump and first lady Melania Trump have tested positive for coronavirus.

Stocks in Asia Pacific also slid on the news. Japan's Nikkei 225 dropped 0.7%, while Australia's S&P/ASX 200 fell 1.4%. Other markets in the region, including those in Hong Kong, mainland China and South Korea, are closed for public holidays. European stocks opened lower, with the FTSE 100 dropping 0.7% in London, while France's CAC 40 shed 1% and Germany's DAX declined 1.1%.

"The Trump diagnosis is an immediate negative," said Jeffrey Halley, senior market analyst for Asia Pacific at Oanda, adding that safe haven assets will likely strengthen on the news. The Japanese yen has already surged and was last trading at about 105 yen per US dollar, up 0.4%. Gold prices rose 0.5% to $1,915 per ounce.

US stock futures were already trending lower earlier as the fate of a massive US stimulus plan remained uncertain, and as news broke that top Trump aide Hope Hicks tested positive for the virus.

President Trump had said late Thursday night that he planned to quarantine after one of his closest aides tested positive for the infection.

"Hope Hicks, who has been working so hard without even taking a small break, has just tested positive for Covid 19," Trump tweeted Thursday night.

Hicks has traveled with the President multiple times recently, including to the first presidential debate in Cleveland on Tuesday, and was seen boarding Marine One, along with several other of the President's closest aides — Jared Kushner, Dan Scavino and Nicholas Luna — none of whom wore masks, on Wednesday as Trump was heading to a campaign rally in Minnesota.

"She did test positive, I just heard about this. She tested positive. She's a hard worker. Lot of masks, she wears masks a lot but she tested positive. Then I just went out with a test. I'll see — you know, because we spent a lot of time -- and the first lady just went out with a test also. So whether we quarantine or whether we have it, I don't know," Trump said during a call-in appearance on Fox News' "Hannity."

He added, "I just went for a test and we'll see what happens, I mean, who knows. ... I spent a lot of time with Hope and so does the first lady, and she's tremendous."

The US Centers for Disease Control and Prevention guidelines state that a 14-day quarantine should take place after the last known exposure to someone who has tested positive for Covid-19. This is because the incubation period for the novel coronavirus can be up to two weeks.

News of Hicks' positive test comes amid continued efforts by the Trump administration to blatantly disregard science and best public health practices during the pandemic, with West Wing staff actively eschewing masks and the President defying recommendations from his own coronavirus task force, proceeding with a busy schedule of packed campaign ralies. Trump and his key aides have shown little interest in changing practices of his staff to meet the needs of the moment.

Trump, in his Fox News interview, speculated that Hicks could have contracted the virus from an interaction with a supporter.

"She's a very warm person. She has a hard time, when soldiers and law enforcement comes up to her, you know, she wants to treat them great, not say, 'Stay away, I can't get near you.' It's a very, very tough disease," he said.

A source close to Hicks told CNN that she is experiencing symptoms and is back in Washington. A source familiar with Hicks' symptoms describes her as being achy and feeling pretty bad. CNN has reached out to Hicks for comment.

"The President takes the health and safety of himself and everyone who works in support of him and the American people very seriously," White House spokesperson Judd Deere told CNN in a statement when asked about the level of contact between Hicks and Trump.

The White House made no mention of Hicks by name, nor did it confirm she had tested positive.

"White House Operations collaborates with the Physician to the President and the White House Military Office to ensure all plans and procedures incorporate current CDC guidance and best practices for limiting COVID-19 exposure to the greatest extent possible both on complex and when the President is traveling," Deere added.

Some White House staffers who were in close proximity were notified of the positive test result today, one official said.

Former vice president and Democratic presidential nominee Joe Biden needs to be tested for Covid-19 after having been on the same stage as President Trump on Tuesday night for the first presidential debate in Cleveland, said CNN's Chief Medical Correspondent Dr. Sanjay Gupta.

But "as you well know, going back to (top aide) Hope Hicks, you can be contagious or more contagious before you develop some of the symptoms — the pre-symptomatic period," Gupta warned.

Biden and Trump both attended the first presidential debate on Tuesday night, though they stayed on different sides of the stage at their own podiums. Biden may have been standing far enough from Trump to avoid infection — but "if you are indoors, you could think of the virus like smoke," Gupta said. It's not clear if the two men interacted backstage or behind cameras.

As the nation reacts to the news of President Trump and first lady Melania Trump’s coronavirus diagnoses, some are also raising questions about the administration’s handling of the situation after top Trump aide Hope Hicks confirmed that she had tested positive.

A small group of White House officials knew by Thursday morning that Hicks had contracted Covid-19, according to CNN Correspondent Kaitlan Collins — but Trump still took a trip to New Jersey for a fundraiser, and press secretary Kayleigh McEnany still held a news briefing at the White House on Thursday.

McEnany didn't wear a mask at the briefing, and made no mention of Hicks' diagnosis to reporters in the room, Collins said.

"So the question is going to be for the White House, why did the President still go to New Jersey, knowing that he could potentially put these people at risk, these donors and fund raisers? And of course, why did the press secretary still hold a briefing despite knowing she had come into contact with somebody who had just tested positive for coronavirus?" Collins said.

"She didn't even tell us. Didn't even tell reporters who were on the plane. And there are going to be serious questions about the White House keeping that information not just from the reporters in the room but also from the American people about the state of the health of the President and the people that he potentially came into contact with."

"The President and First Lady are both well at this time, and they plan to remain at home within the White House during their convalescence," Conley wrote.

"The White House medical team and I will maintain a vigilant watch, and I appreciate the support provided by some of our country's greatest medical professionals and institutions," Conley wrote, without elaborating what assistance was being provided to the White House.

"Rest assured I expect the President to continue carrying out his duties without disruption while recovering, and I will keep you updated on any further developments," he wrote. 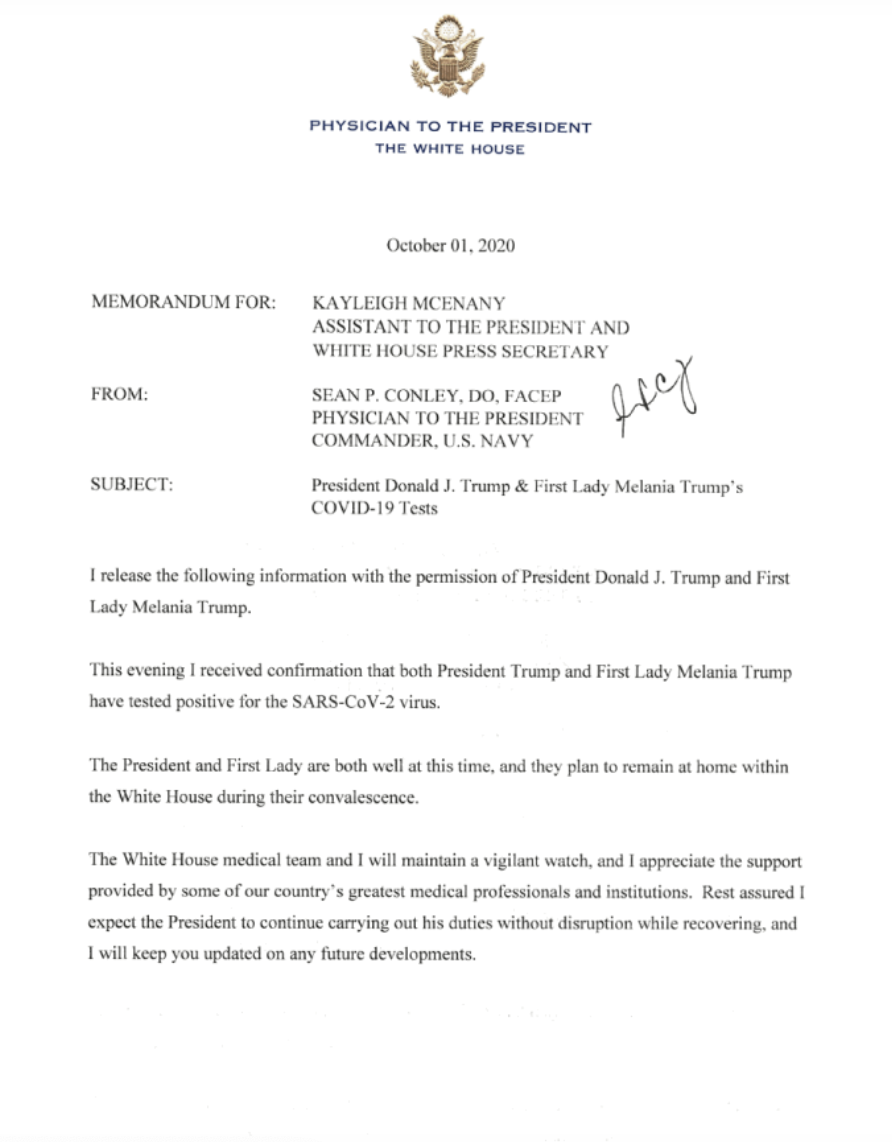