A non-military attending physician at Walter Reed National Medical Center harshly criticized President Donald Trump’s motorcade photo op as something which could endanger lives of Secret Service agents who accompanied him in his SUV.

“Every single person in the vehicle during that completely unnecessary Presidential 'drive-by' just now has to be quarantined for 14 days. They might get sick. They may die. For political theater. Commanded by Trump to put their lives at risk for theater. This is insanity,” Dr. James Phillips tweeted.

Phillips has been an attending physician for almost three years at Walter Reed medical center and is also a board certified emergency medicine physician and assistant professor at George Washington University Hospital in Washington, D.C.

“That Presidential SUV is not only bulletproof, but hermetically sealed against chemical attack. The risk of COVID19 transmission inside is as high as it gets outside of medical procedures. The irresponsibility is astounding. My thoughts are with the Secret Service forced to play,” Phillips tweeted.

The White House released a statement this evening saying that "appropriate precautions" were taken for Trump's motorcade and that the movement "was cleared by the medical team as safe to do.”

Speaking with CNN's Wolf Blitzer Sunday evening, Phillips, who has not participated in the care of the President, went on to say it was unlikely the President's motorcade had been approved by medical professionals without outside political influence.

"That's not standard practice by any means and I have a hard time believing that without undue influence, based on their chain of command, that those physicians would have cleared that," he said of the President's motorcade.

"When we take care of patients in the emergency department, or in the thousands of hours I've spent in the inpatient wards and surgery and medicine and ICU, we don't let the patients leave the hospital when they're sick, unless they sign out against medical advice," he added. "...The idea that this would be cleared without any medical indication is absurd."

With President Donald Trump battling coronavirus at Walter Reed medical center, White House doctor Sean Conley has come under fire for making confusing and misleading comments — including one he later walked back — about the President's condition.

After Saturday's televised briefing at Walter Reed, a White House official offered a more alarming assessment of Trump's health to reporters. That reporting was initially given to a pool of reporters attributed to an official familiar with the President's condition.

Later, the Associated Press and the New York Times identified that official as White House chief of staff Mark Meadows.

"The chief and I work side by side," Conley said. "And I think his statement was misconstrued. What he meant was that 24 hours ago, when he and I were checking on the President, that there was that momentary episode of the high fever and that temporary drop in the saturation, which prompted us to act expediently to move him up here."

Conley added: "Fortunately, that was really a very transient limited episode, a couple hours later he was back up. Mild again. You know, we, I'm not going to speculate what that limited episode was about so early in the course but he's doing well."

Conley on Sunday also defended the decision to not disclose that the President was administered oxygen by saying he wanted to "reflect the upbeat attitude of the team."

"I was trying to reflect the upbeat attitude that the team, the President, his course of illness has had. I didn't want to give any information that might steer the course of illness in another direction, and in doing so it came off that we were trying to hide something," Conley said, adding that "wasn't necessarily true."

The official said it "seems highly likely this (outbreak) originated at the SCOTUS announcement last week. It may have come from the Hill. The next major concern will be securing Capitol Hill and protecting lawmakers."

The ceremony on Sept. 26 brought together top White House aides and allies, cabinet members, Republican lawmakers, and friends and family of Barrett, who has since tested negative but was revealed this week to have contracted the disease, along with her husband, earlier this year. Both have recovered.

Trump, who announced he tested positive early Friday, was moved to Walter Reed National Military Medical Center later that day and was expected to be there for the next few days. The Supreme Court announcement took place outdoors, but Barrett and others also gathered inside the White House.

Both indoors and out, participants were observed without masks and not practicing recommended social distancing measures. 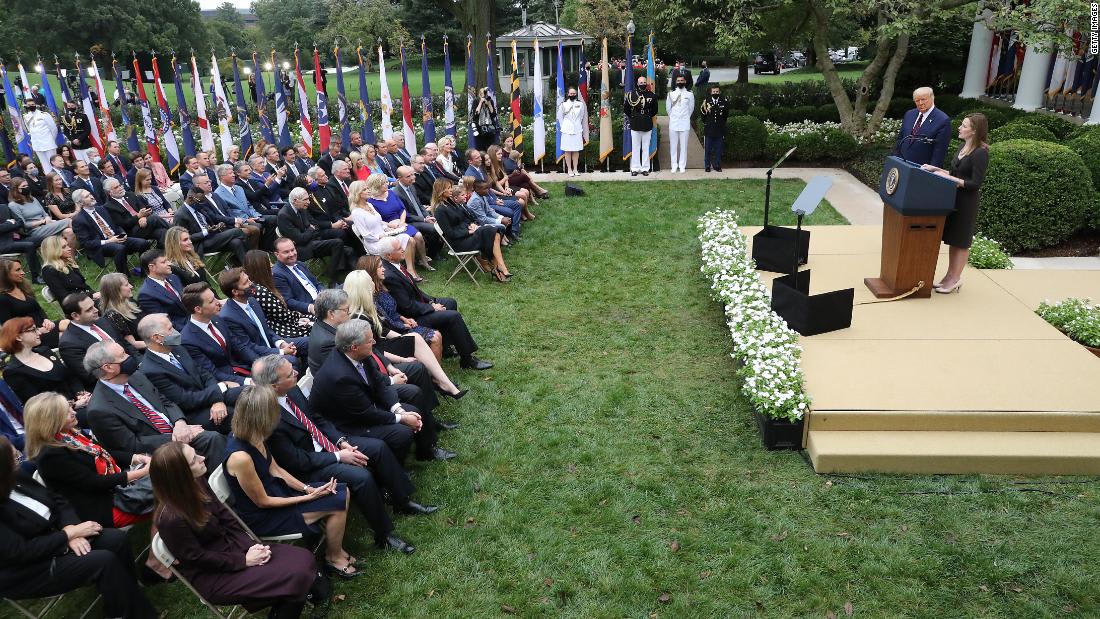