In an email to GOP senators obtained by CNN, Senate Majority Leader Mitch McConnell detailed the changes in the Senate schedule and made it clear he needs all Republican senators back by Oct. 19.

“The Senate will go into pro forma session until October 19th. On that day, we will need all Republican Senators back and healthy to ensure we have a quorum,” he said.

It’s another sign that he has little margin for error to get Judge Amy Coney Barrett confirmed by the election.

However, if Sens. Thom Tillis and Mike Lee – the two GOP senators on the Senate Judiciary who tested positive for Covid-19 – are unable to return, Democrats will be able to deny them a quorum during the vote on Barrett’s nomination.

Read the full text of his email below:

"Colleagues – our thoughts and best wishes are with the President, the First Lady and Mike, Thom and Ron. I have discussed our situation with Chuck and believe the followIng course of action is prudent. The Senate will go into pro forma session until October 19th. On that day, we will need all Republican Senators back and healthy to ensure we have a quorum.

Lindsey and his committee will be able to conduct the confirmation hearings of Judge Barrett as planned, beginning on October 12th. Should we need to break into a pro forma to conduct covid or other related business requiring votes, you will be given at least 24 hours notice to return.

I had a good conversation with the President yesterday and he is in good spirits. I am mindful, though, that these times are unsettling in the life of our country. We need to lead now, with extra prudence and care, not just for our own health and well being, but to be able to perform our elected duties and to be examples to the country. Wear masks, stay distant, and come back safely on the 19th.

Pence said he had spoken to Trump “a couple of times since his diagnosis," but did not say specifically if he had talked to him today.

“I know I speak on behalf of the President today when I tell you how grateful we are," Pence said. "President Trump, after he gets the right treatment and gets back on his feet, I can promise you we are going to continue to carry that message that we are going to Make America Great Again again."

Pence made it clear that he intends to remain on the campaign trail over the next 30 days in what they're calling "Operation MAGA."

Sources have told CNN that campaign officials have struggled to determine what steps they should take given both their candidate and campaign manager have tested positive for coronavirus.

They held several internal calls today and CNN was provided access to this one by a source.

"See you out on the campaign trail," Pence said as he wrapped up.

President Trump’s re-election campaign announced the launch of “Operation MAGA,” which the campaign describes as "a full marshaling of top-level surrogates, campaign coalitions and Trump supporters, to rally behind the President until the he can return to the trail."

The President is currently at Walter Reed medical center after announcing he had tested positive for Covid-19 early Friday morning. An attempt by his doctor to reassure the public about the President's condition only created widespread confusion and concerns about transparency on Saturday, as a source familiar with Trump's health told reporters the next 48 hours will be critical in determining how he fares.

While Trump is in hospital, Vice President Mike Pence will make in-person campaign appearances in key states, as will members of the first family.

“Operation MAGA will fire up the entire MAGA universe to keep President Trump’s campaign at full speed until our Commander-in-Chief returns to the campaign trail,” said Trump 2020 campaign manager Bill Stepien, who has also tested positive for coronavirus.

"He sounds well and says he's feeling good," McConnell wrote in a tweet.

Sanders opened by wishing President Trump and the first lady "a full and speedy recovery," sending well wishes to fellow members of congress infected with Covid-19, as well as "the many, many other Americans who are struggling with this terrible disease."

"What the last few days have told us," Sanders said, "is that, if there was ever any doubt, it should now be clear now that no one, no one, is safe from this pandemic."

The former Democratic presidential candidate said at the end of this remarks that there is one person with the discipline, temperament, and proposed policies to lead Americans through the pandemic: Joe Biden.

All of the Democrats on the Senate Judiciary Committee wrote a letter to Committee Chairman Lindsey Graham, urging him to delay the confirmation hearings for Supreme Court nominee Amy Coney Barrett after two Senators on the committee tested positive for Covid-19.

“To proceed at this juncture with a hearing to consider Judge Barrett’s nomination to the Supreme Court threatens the health and safety of all those who are called upon to do the work of this body,” the letter said.

The letter called the idea of moving forward with the hearing “a disservice to the American public.”

Earlier Saturday: Graham released a statement saying he intends to move forward with the hearing.

President Trump's positive coronavirus diagnosis has raised questions about the health of those around him, including members of his Cabinet and his vice president.

The following graphic shows the testing status of some of the President's family members, senior government officials and advisers: 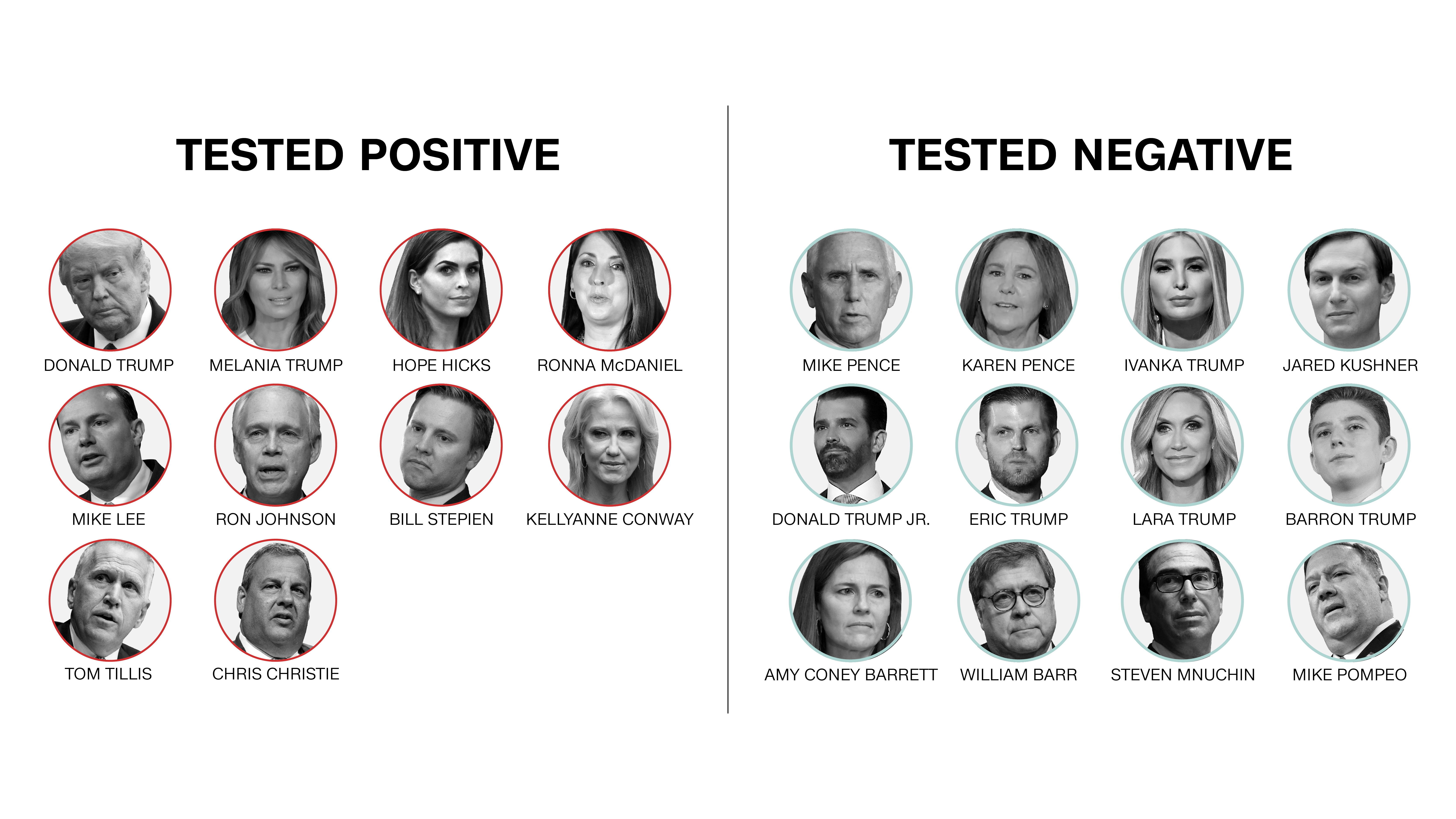 You can read more about them and when they were tested here.

At least eight people, including President Trump, have tested positive for Covid-19 after attending a Rose Garden event on Sept. 26, where Trump announced his choice to nominate Judge Amy Coney Barrett to the Supreme Court.

Guests did not socially distance and very few wore masks.

See where people stood or sat:

CORRECTION: The graphic in this post has been updated to correctly identify Notre Dame President Rev. John Jenkins.

A Biden campaign official said the Democratic nominee intends to move forward with in-person campaigning despite President Trump, and several individuals in his orbit, contracting coronavirus.

Campaign aides believe they’ve developed an effective recipe over the past few months for campaigning safely — including mask wearing, social distancing and smaller events — and intend to continue with those practices.

Biden and his wife Jill are scheduled to travel to South Florida on Monday. On Thursday, Biden will visit Arizona, his first visit to the battleground state, with his running mate Kamala Harris.

Yesterday: Biden traveled as scheduled to Grand Rapids, Michigan, after receiving a negative result to his coronavirus test. He went forward with his planned remarks on the economy but he did pull down an in-person organizing event with the Kent County Democrats.

A campaign official said the recent developments regarding coronavirus reinforces why it’s a central issue in this campaign.

“It’s about who do Americans trust to get the virus under control and to protect them and how to get the country back to work,” the official said.

The official reiterated that if Biden were to ever test positive for coronavirus, the campaign would make that information public.