Dr. Brian Garibaldi, who is part of President Trump's medical team, said the President could be discharged from Walter Reed medical center as early as Monday.

Trump completed a second dose of remdesivir on Saturday and "today he feels well," Garibaldi said.

"He has been up and around. Our plan today is to have him eat and drink, be up out of bed," Garibaldi said. "[I]f he continues to look and feel as well as he does today our hope is to plan for a discharge as early as tomorrow to the white house where he can continue his treatment course."

Trump’s physician, Dr. Sean Conley, provided some more details as to the President's condition Friday, which is when he was taken to the medical center.

"Late Friday morning when I returned to the bedside, the President had a high fever and his oxygen saturation was transiently dipping below 94%," Conley said. "Given these developments I was concerned for possible rapid progression of the illness. I recommended the President we try supplemental oxygen, see how he would respond. He was fairly adamant he didn't need it. He was not short of breath. He was tired, had a fever, that was about it. After about a minute only two liters his saturation levels were back over 95%. He stayed on that for about an hour maybe, and it was off and gone. Later that day by the time the team here was at the bedside the president had been up out of bed moving about the residence with only mild symptoms."

President Trump’s physician, Dr. Sean Conley, said he is continuing "to improve" but, as with any illness, "there are frequent ups and downs," he said a news briefing from Walter Reed National Military Medical Center in Bethesda, Maryland.

"Over the course of his illness, the President has experienced two episodes of transient drops in his oxygen saturation. We debated the reasons for this, and whether we'd even intervene. It was a determination of the team based on the timeline from the initial diagnosis that we initiate dexamethasone," Conley said.

Conley said the President was given supplemental oxygen and his current blood oxygen level is 98%.

Conley refused to say how low the President's blood oxygen levels had dropped. When asked if they had dropped below 90, he replied, "We don't have any recordings here of that."

When asked again on whether they had dropped below 90, Conley said the President's blood oxygen levels didn't get down into "the low 80s."

National Security Adviser Robert O'Brien said that he, along with Gen. Mark Milley and Secretary of State Mike Pompeo, will brief the President later this afternoon, adding that he spoke to White House Chief of Staff Mark Meadows earlier this morning.

"I spoke to the chief of staff before coming to the White House this morning and he said the President is doing very well and not surprisingly wants to come back home," O'Brien told reporters shortly after an interview on CBS. "He's been watching TV, he's been working and he wants to get back to doing the business of the American people. I'll be briefing him this afternoon along with General Milley and Secretary Pompeo. We're scheduled to give him a foreign policy and national security brief. We'll be here at the White House — he'll be at Walter Reed in a secure facility."

O'Brien, who contracted coronavirus earlier this year, said that his last conversation with Trump was on Friday while O'Brien was in Geneva and speaking with his counterparts in the Russian government. He stressed that Trump "is firmly in control."

"I appreciate the fact that Vice President Biden came out with and said that he and his wife, Dr. Jill Biden, were praying for the president and First Lady," he said on CBS.

Trump has been at the medical center since Friday to be treated for Covid-19.

White House reporters have been told to expect the medical briefing around 11:30 a.m. ET.

Joe Biden’s presidential campaign underscored their well wishes to the President and first lady this morning.

Symone Sanders told CNN that the Biden campaign has not heard from the Trump campaign or the White House since the President’s diagnosis but added that they do not believe Biden was exposed.

“We extend our thoughts and prayers to President Trump and the first lady. We are sincerely hoping that the President makes a very quick recovery and we can see him on the campaign trial soon,” she said. “No, we haven't heard to my knowledge from the Trump campaign or the White House, but the reality is that Vice President Biden was not exposed.”

Sanders reiterated that the campaign has followed protocol throughout the pandemic, including wearing masks.

"We are adhering to CDC guidance, we are listening to the public health experts and we are taking every single precaution. Our staff are wearing masks and are social distancing everywhere — on planes, in cars, inside events, outside events," Sanders said. "We're wearing the masks that are keeping us safe."

Responding to the Trump campaign accusing Biden of using masks as a "prop," deputy campaign manager Kate Bedingfield told ABC, "I think that tells you a lot of what you need to know about how the Trump campaign has treated this from the outset. Joe Biden believes that the words of a president matter, that the actions of a president matter. From the outset, he has taken this seriously.”

“He called me Friday night after he got into the hospital, it was late around 10:30 or so, you could tell he wasn’t feeling well,” McCarthy said in an interview on Fox.

McCarthy said the President was working, and they discussed the coronavirus stimulus relief bill, which remains at an impasse on Capitol Hill

“He was still doing work, we were talking about how we could get the speaker Nancy Pelosi to stop playing politics and actually get a COVID relief bill,” the Minority Leader noted.

McCarthy added that Trump was “worried about others who had COVID.”

Trump campaign senior adviser Jason Miller couldn't explain why President Trump went to Bedminster for a fundraiser Thursday after learning Hope Hicks, one of the President's aides, had tested positive for coronavirus.

"We take it seriously. It's why we give everyone coming to rallies or events, we give them a mask. We check their temperature. You know, I would say that with regard to Joe Biden, I think too often he's used the mask as a prop. Mask is very important, but even if he's — he could be 20, 30 feet away from the nearest person and still have the mask on. That's not going to change anything that's out there. Also we've seen with — with Joe Biden, I mean, we can't all just stay in our basement for the rest of our lives," Miller said. 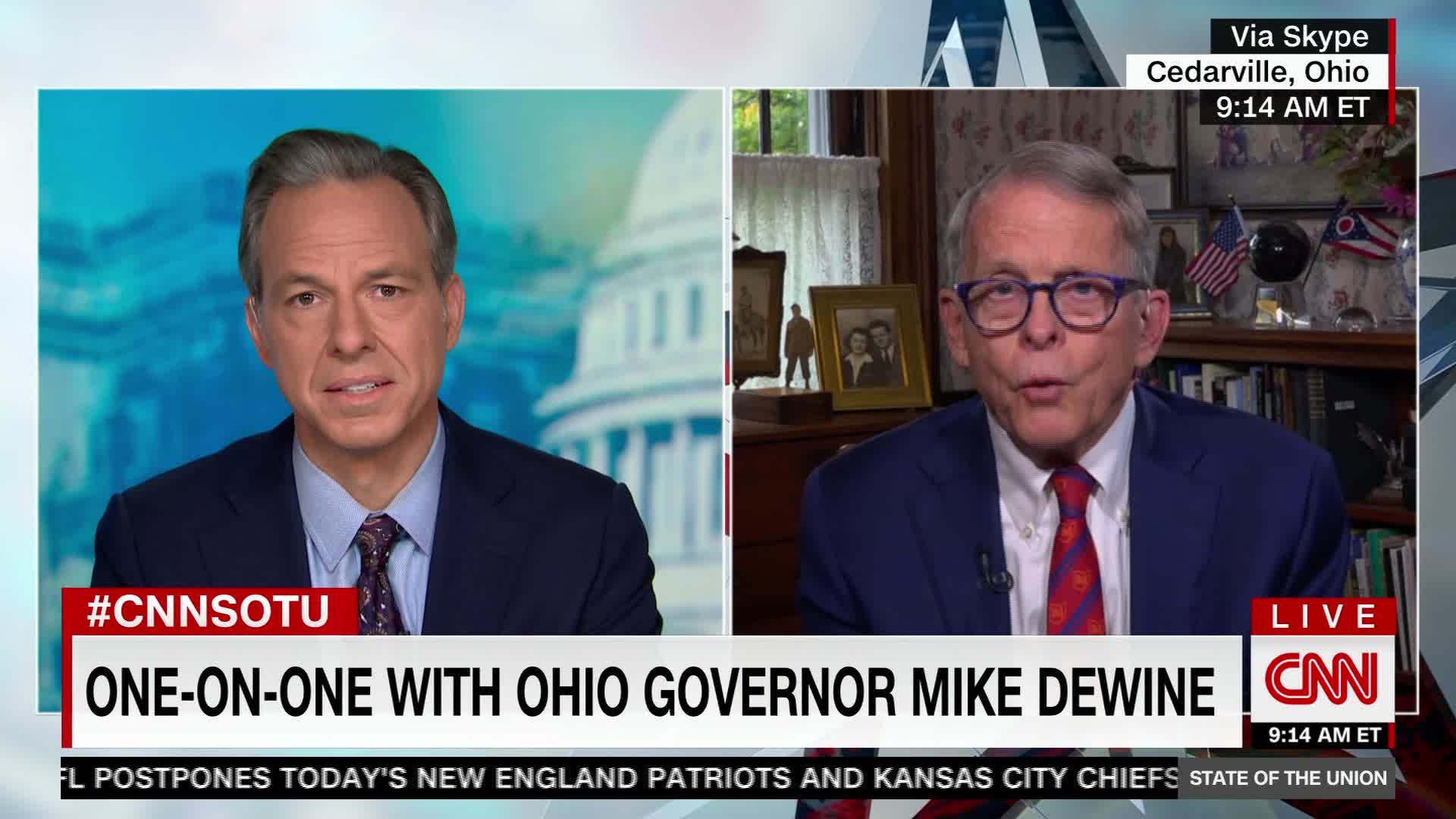 Ohio Gov. Mike Dewine said Sunday that he has not been contacted by the White House about potential Covid-19 exposure in his state after President Trump tested positive for the virus days after his Cleveland debate.

The President participated in the first presidential debate against Democrat Joe Biden in Cleveland last week. DeWine said that he didn't attend the debate, but conceded that he wished the President wore a mask more often.

"Do I wish — look do I wish the President had worn a mask all the time? Of course. You know, of course," he said.

Republican Sen. Ron Johnson of Wisconsin has tested positive for coronavirus after being exposed to someone with the virus earlier this week, according to his spokesman, making him the third GOP senator to test positive in 24 hours and threatening the quick confirmation prospects of Judge Amy Coney Barrett to the Supreme Court.

In a sign of just how little margin for error there is to get Barrett confirmed by election day, Senate Majority Leader Mitch McConnell wrote in an email to GOP senators obtained by CNN that he needs all Republican senators back in Washington by Oct. 19.

Sens. Mike Lee of Utah and Thom Tillis of North Carolina, who sit on the Judiciary Committee, tested positive for Covid-19 on Friday — just days after attending a White House event where President Trump nominated Barrett.

Multiple attendees of that event, including Trump, have tested positive in the week since the ceremony, which featured many people not wearing masks and not observing social distancing protocols.

Johnson did not attend the Barrett nomination ceremony, where several people appeared to have been exposed to the virus, because he was quarantining from a prior exposure, during which he twice tested negative for the virus, according to the spokesman.

Johnson was able to get tested before speaking to the Ozaukee County Republican Party Oktoberfest Dinner on Friday night in Wisconsin, he said on a call with reporters Saturday. The senator, who said he had decided to get tested as a precaution after hearing that Lee had tested positive earlier on Friday, learned he had tested positive after the event on his ride home.