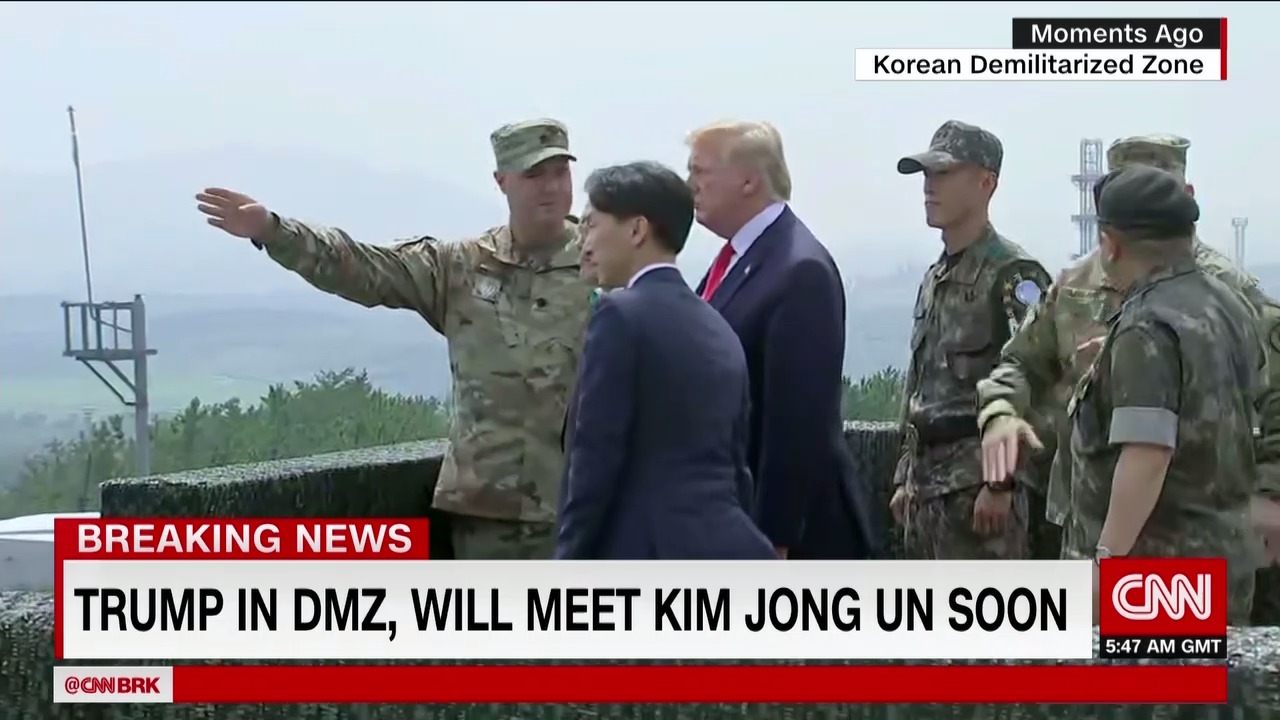 US President Donald Trump and South Korean President Moon Jae-in have gone onto one of the observation posts that look out at North Korea.

At the post, they received a briefing from the US Commander describing the security along the demilitarized zone (DMZ), which is the most militarized border in the world.

"It's worth thinking how different the DMZ that President Trump is seeing is from the DMZ other leaders have seen," said CNN's Paula Hancocks, commenting on the massive reduction in armaments of the DMZ since rapprochement began between North and South Korea. 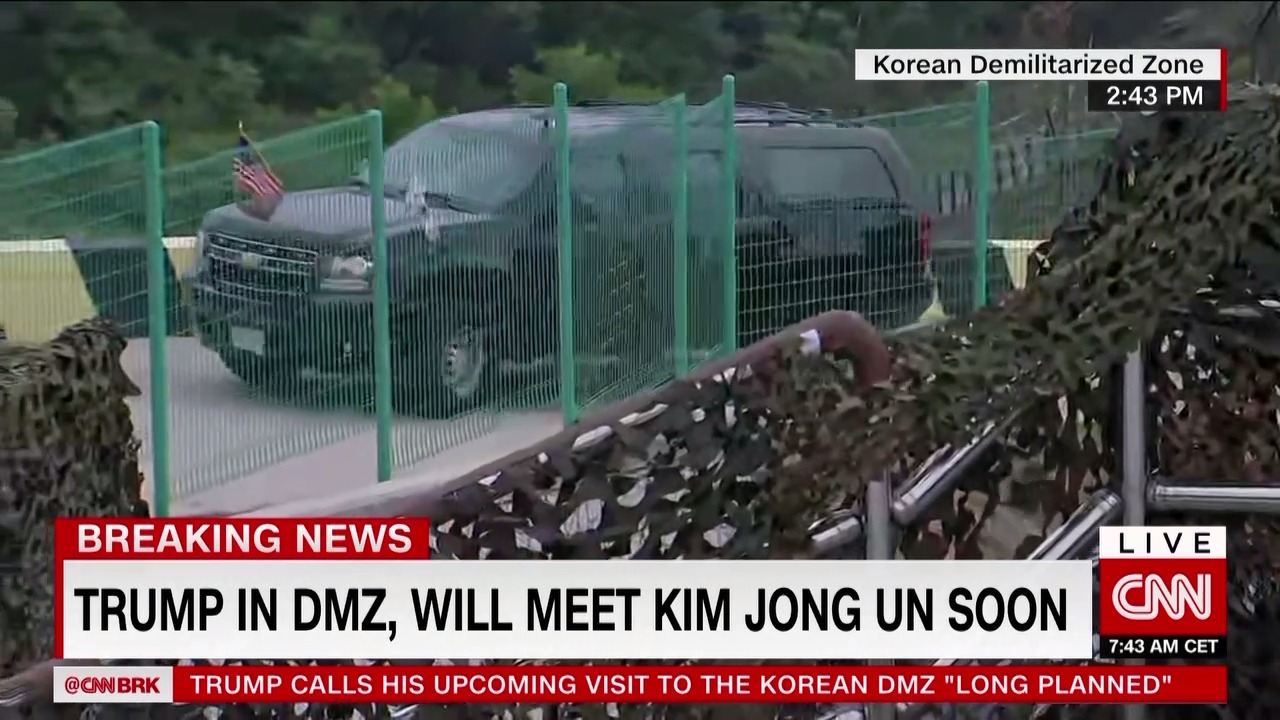 US President Donald Trump and South Korean President Moon Jae-in have driven into the demilitarized zone (DMZ), which divides the two Koreas, and are expected to meet with North Korea's Kim Jong Un in mere minutes.

They have gone onto one of the observation posts that offer a view of North Korea. 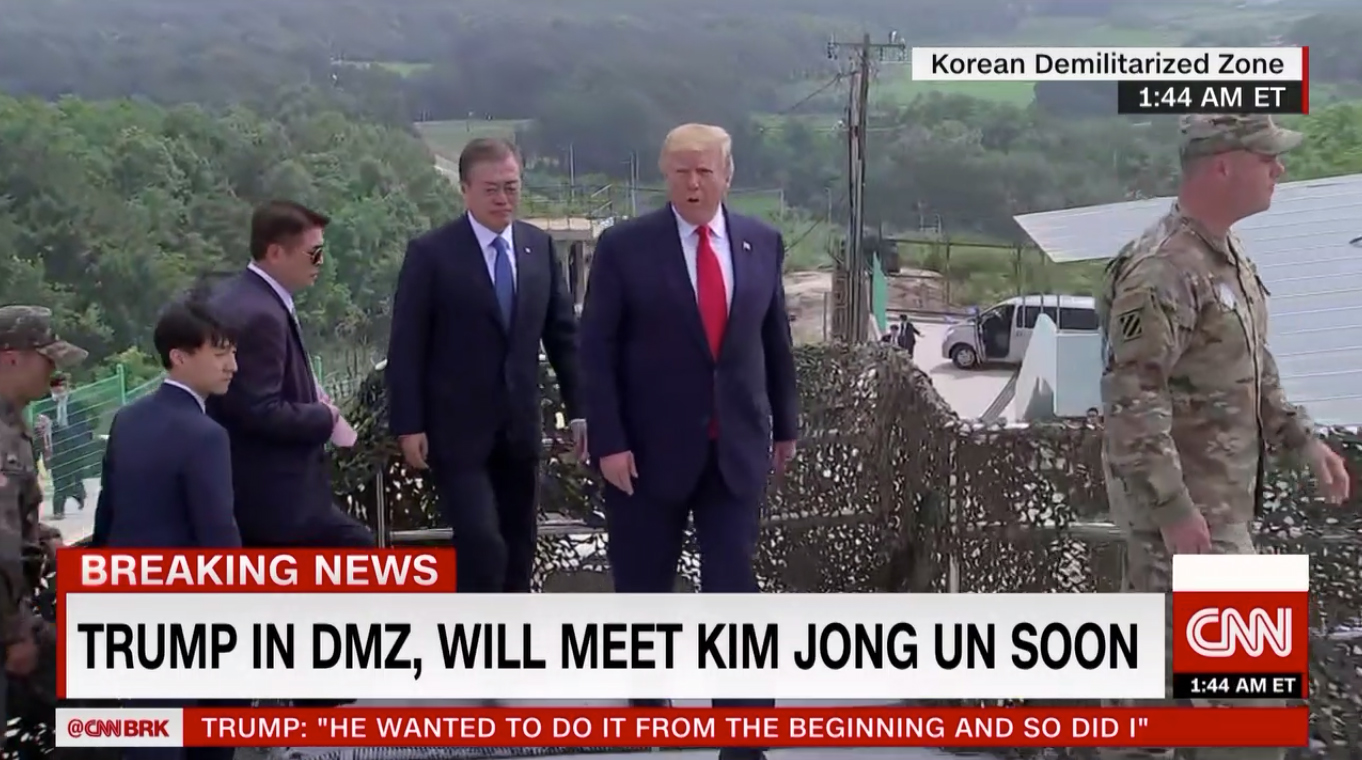 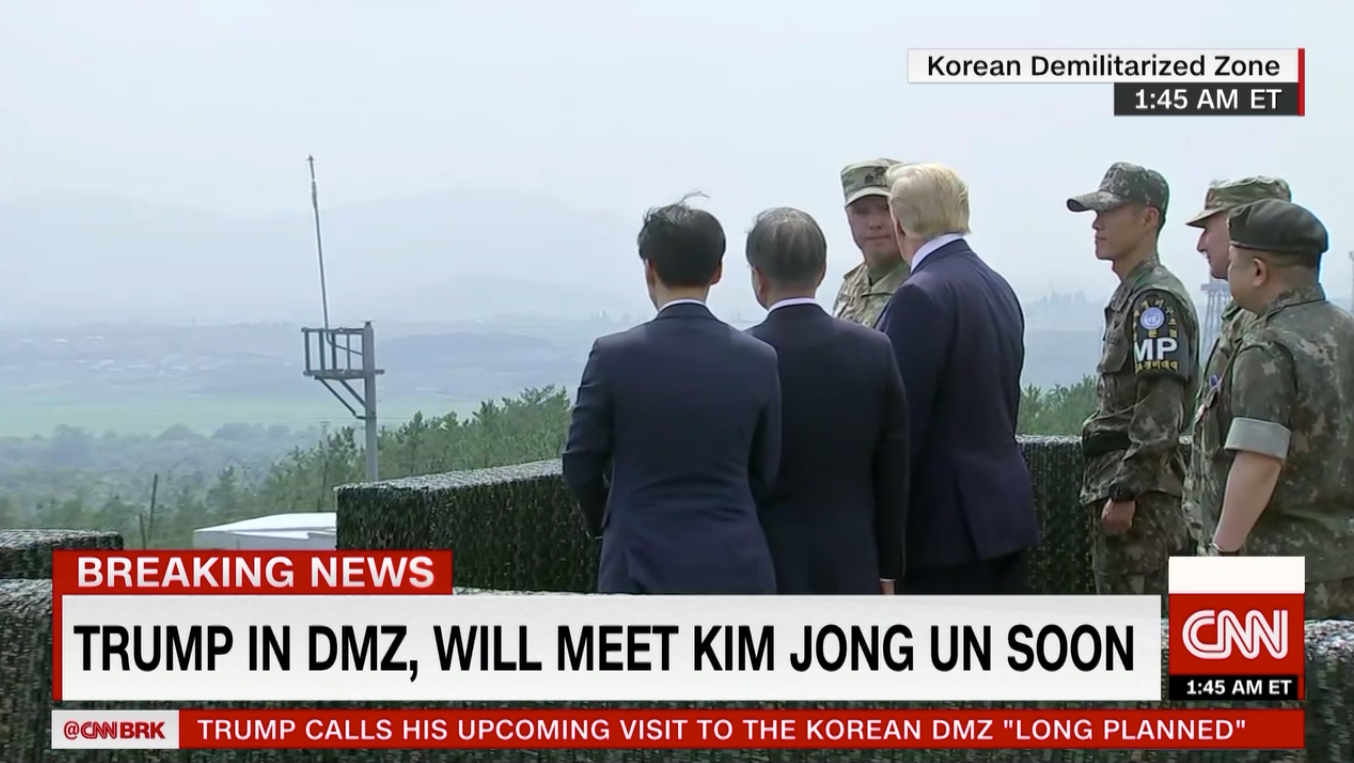 Both US President Donald Trump and his South Korean counterpart Moon Jae-in have confirmed that they will meet with North Korean leader Kim Jong Un at the demilitarized zone (DMZ) today.

"I look forward to it very much," Trump said. "We understand each other."

Moon said this would be "the first time in history the leaders of the US and North Korea will be standing face to face in Panmunjom," the border village in the DMZ.

One party to the meeting which hasn't confirmed it: Pyongyang.

North Korean state media previously noted Trump's comments about a potential meeting, and indications are that Kim is headed to the DMZ, but nothing is certain.

While presumably Trump and Moon would not have advertised the meeting unless they were certain it would happen, Kim has perhaps the biggest opportunity to snub a US leader in the history of relations between Pyongyang and Washington and show that it's he, not the two men south of the DMZ, in charge of this issue.

After Kim and Trump's much vaunted second summit in Hanoi, Vietnam ended in failure, it's not impossible that an attempted reset today could result in similar embarrassment.

US President Donald Trump has arrived at the demilitarized zone (DMZ), where he is set to meet with North Korea’s Kim Jong Un.

The helicopter carrying pool reporters traveling with US President Donald Trump to the demilitarized zone (DMZ) has arrived at the landing zone.

Kim Jong Un did not meet with any international leaders during his first five years in power. But since the start of 2018, he’s been racking up the miles -- and the photo-ops.

Here’s who Kim has met so far:

For most of its history, the Korean Peninsula has existed as a single political entity. Its division was largely a part of Cold War political calculations that were made absent of any consideration or input from Koreans.

Learn more about the split here.

US President Donald Trump has said that he hopes to meet North Korean leader Kim Jong Un today when he arrives at the demilitarized zone (DMZ) between the two Koreas shortly.

Pyongyang, however, so far been coy, with state media saying only that the government had noted Trump's statement with interest.

But at least one analyst thinks a meeting is already a done deal.

"President Trump and Chairman Kim will definitely meet along the DMZ and make history by shaking hands in front of the cameras but with an historic twist: Trump will cross briefly into North Korea and shake hands with Kim, becoming the first US president to officially set foot there, cementing both leader’s commitment to a better relationship," predicted Harry J. Kazianis, senior director of Korean studies at the US-based Center for National Interest.

What to expect today: Kazianis added that "we should expect the meeting itself to be short but meaningful, as it will mark a reset in relations. It will also allow both sides to test each other’s intentions, possibly picking up from where negotiations left off in Hanoi."

"Such a deal would likely see North Korea agree to a big step towards denuclearization for some sort of sanctions relief, a peace declaration ending the Korean War as well as the opening of liaison offices," Kazianis said.

Many of Trump’s recent predecessors have travelled to the demilitarized zone (DMZ) between the Koreas, often photographed with binoculars peering into North Korean-controlled territory.

Here are pictures from some of their visits.

Former president Barack Obama visited the DMZ on March 25, 2012, before heading to Seoul for the 2012 Seoul Nuclear Security Summit. 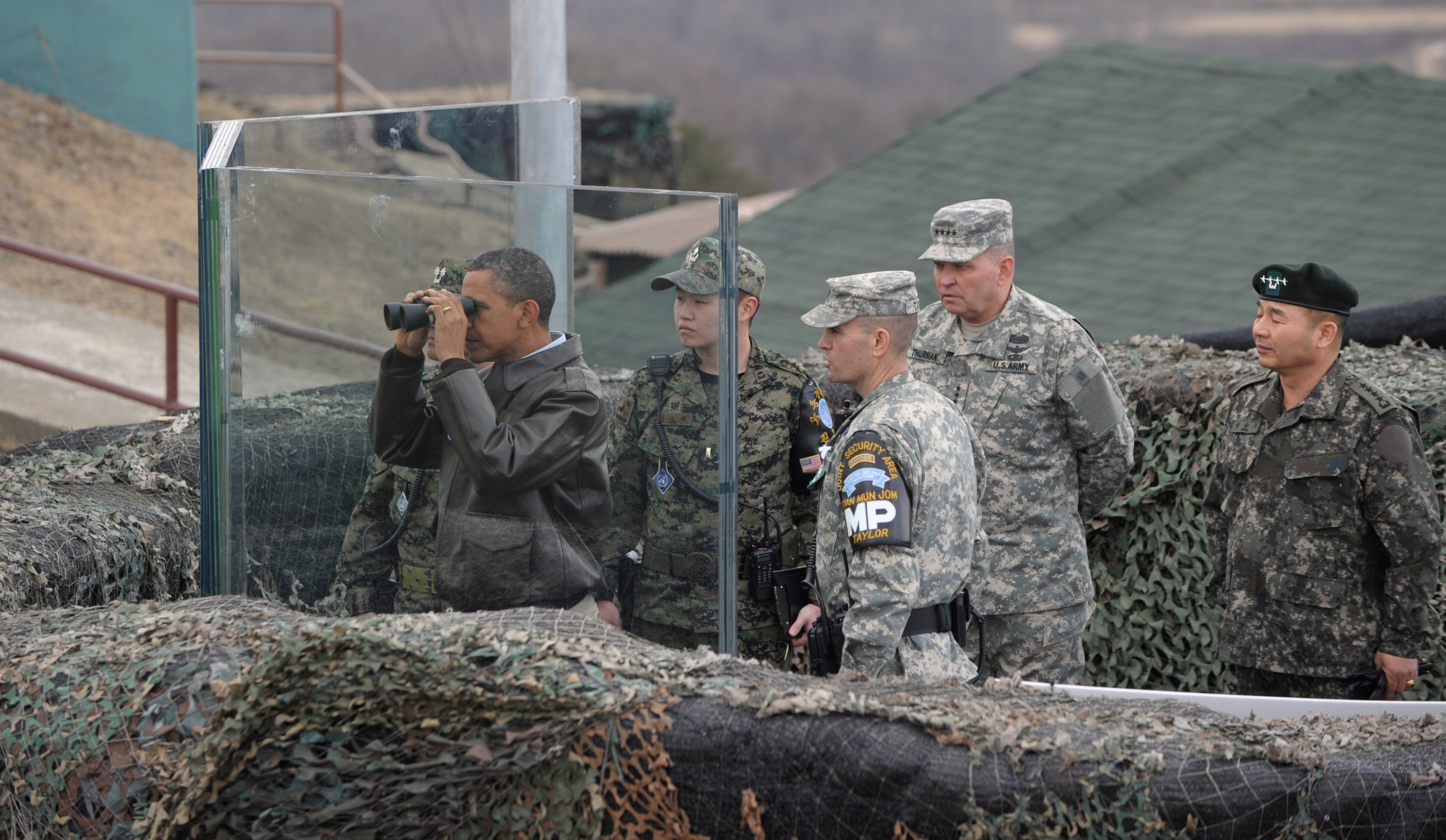 Before then, former president George W. Bush visited the DMZ on February 20, 2002. 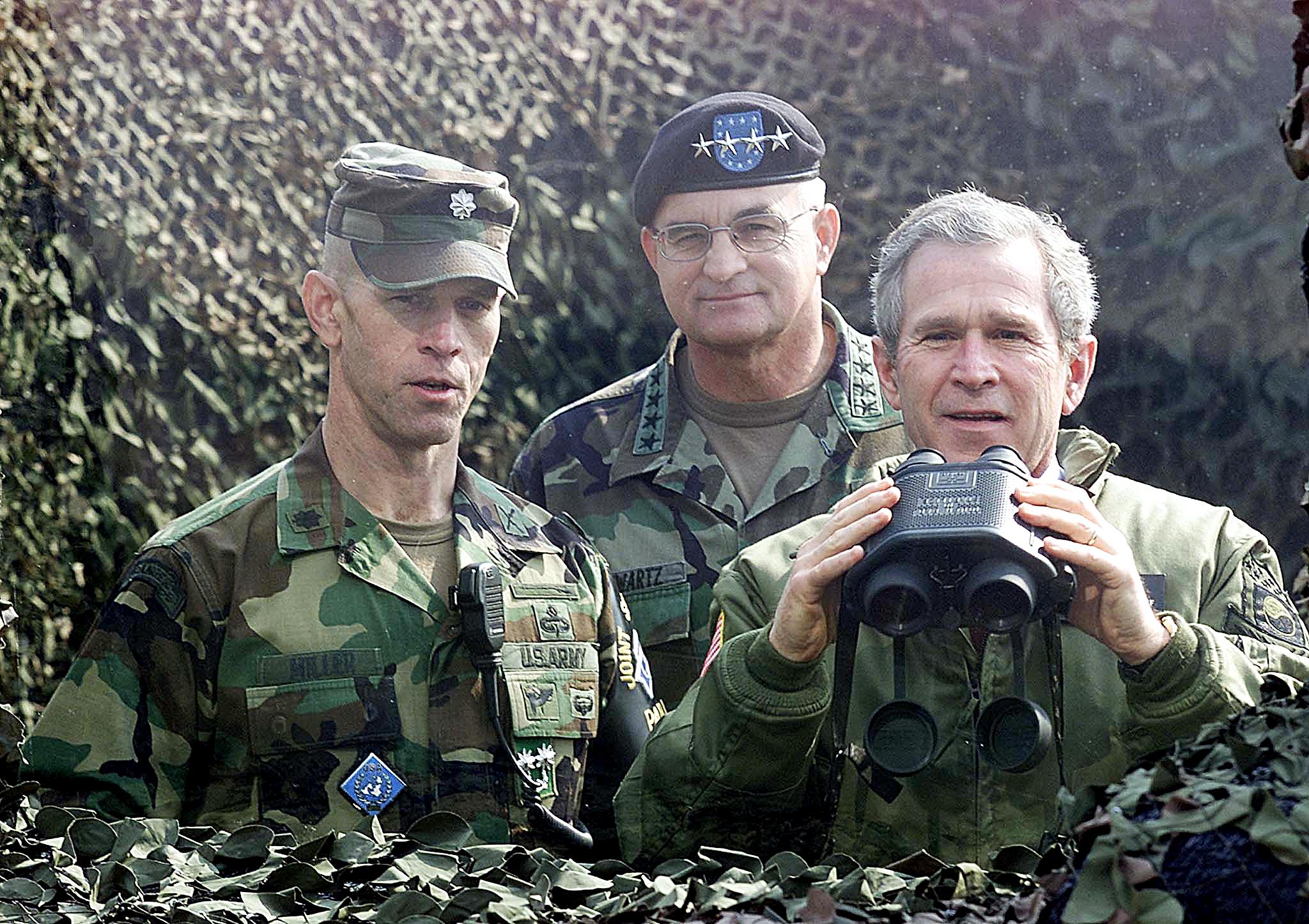 Bill Clinton and Ronald Reagan also visited the DMZ during their presidencies. Meanwhile, presidential aides often travel even closer, approaching or entering the famed blue houses that sit in between the Military Demarcation Line (MDL), the line that divides the DMZ in half.

Hillary Clinton went on one such trip when she was serving as Secretary of State in 2010. 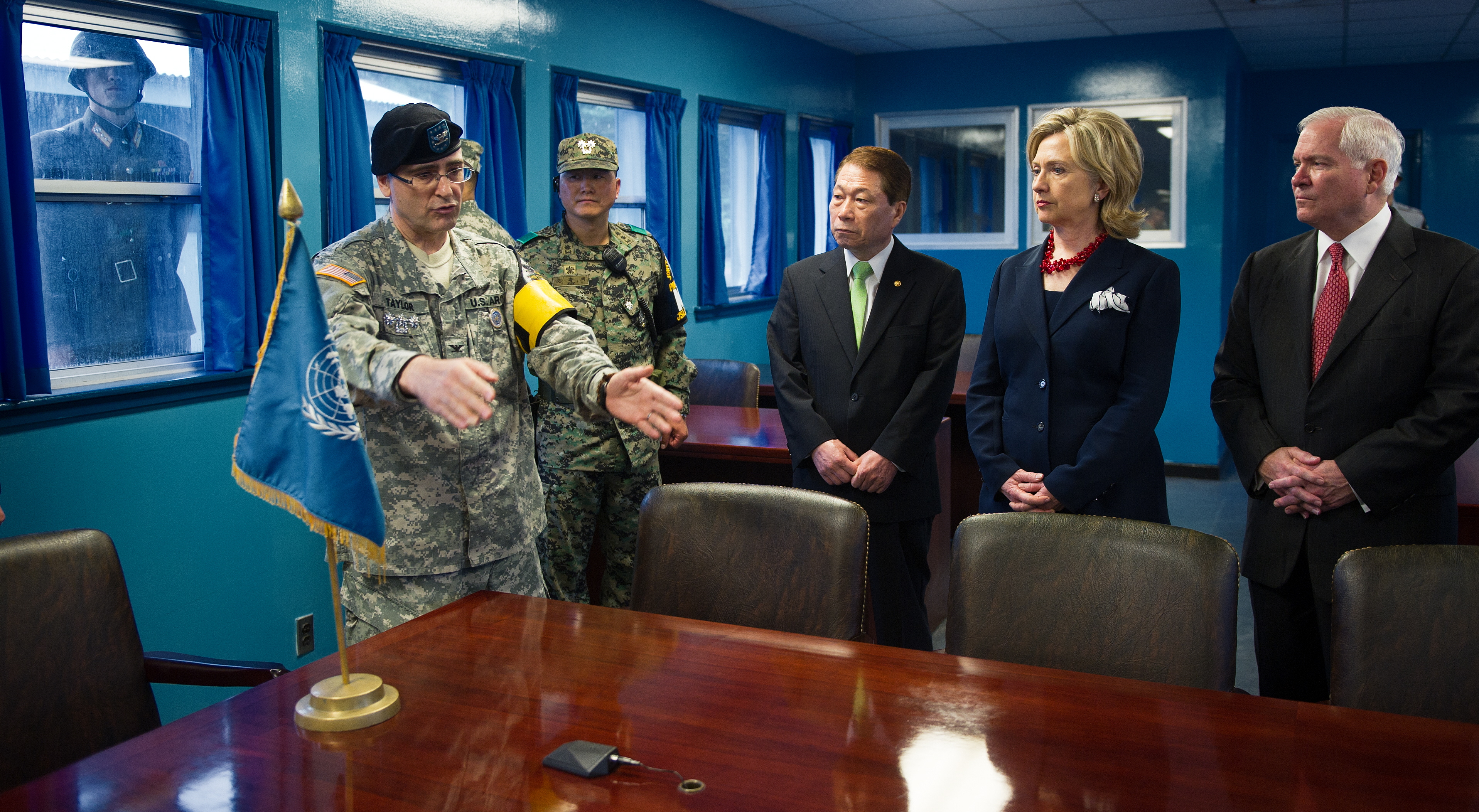