The latest on the Trump administration and the border 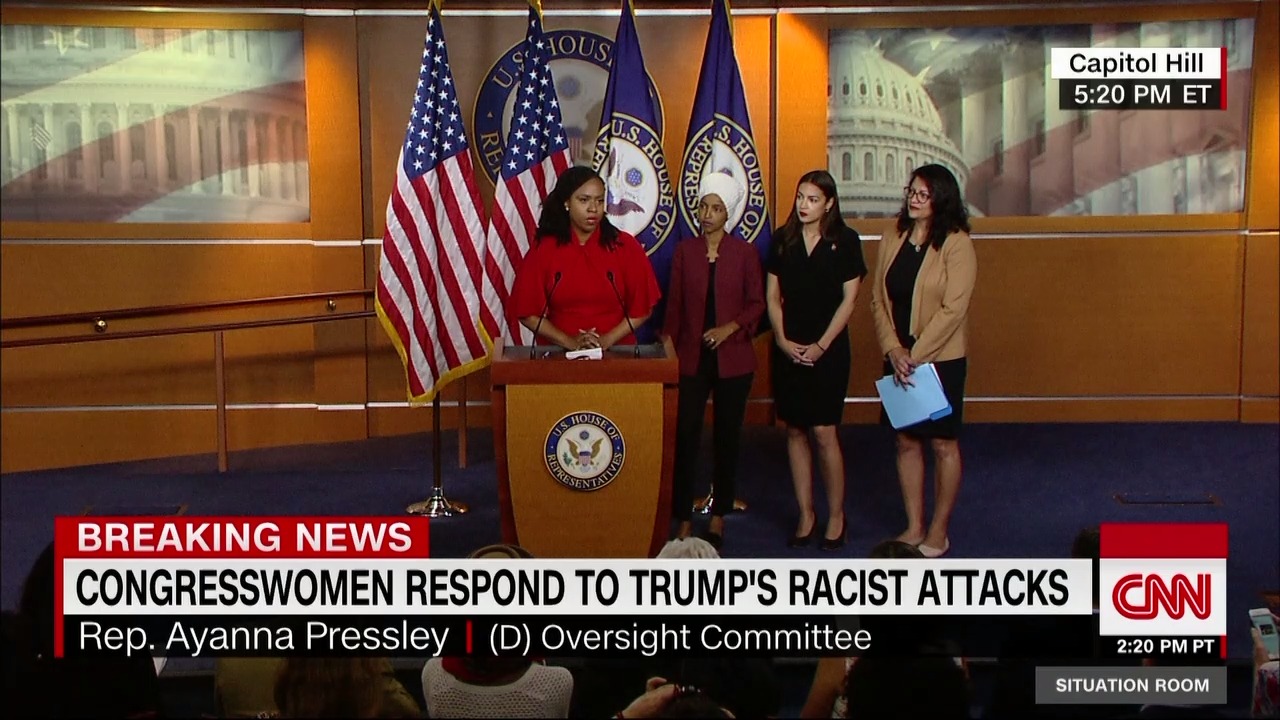 "He does not embody the grace, the empathy, the compassion, the integrity that that office requires and that the American people deserve," the Massachusetts lawmaker said speaking at a news conference this afternoon. "That being said, I encourage the American people and all of us in this room and beyond to not take the bait. This is a disruptive distraction from the issues of care, concern, and consequence to the American people."

Pressley defiantly said, “We will not be silenced. She also took aim at the President calling him “the occupant of the White House” and saying, “I will always, refer to him as the occupant as he is only occupying space.”

She was joined by Reps. Ilhan Omar of Minnesota, Alexandria Ocasio-Cortez of New York and Rashida Tlaib of Michigan.

The four congresswomen were at the center of Trump's tweets. On Sunday, the President used racist language to attack progressive Democratic congresswomen, falsely implying they weren't natural-born American citizens.

Ocasio-Cortez, Tlaib and Pressley are natural-born US citizens, while Omar was born in Somalia and immigrated to the US when she was young. Omar became a citizen in 2000 when she was 17 years old, according to the New York Times.

President Trump blasted Democrats again today in a series of tweets, saying, "IF YOU ARE NOT HAPPY HERE, YOU CAN LEAVE."

He went on to say, "It is your choice, and your choice alone. This is about love for America. Certain people HATE our Country...."

Trump, speaking at a news conference at the White House today, himself denied his attacks on the four women were racist.

Mexico rejected the Trump administration's new asylum regulation that could dramatically limit the ability of Central American migrants to claim asylum, the country’s foreign ministry said in a statement released this afternoon.

In the statement, Mexico reiterated their “respect for human rights of all people, as well as their international commitments regarding asylum and political refuge."

“Mexico will maintain its politics of asylum and refuge as stated in our constitution," he added.

The statement added the government of Mexico will “remain alert to the implications that this US decision could entail to those seeking asylum from other countries that enter through its southern border. In this sense, special attention will be paid to respect the principle of non-refoulement recognized by the current International Law.”

“Our position is very clearly established, and we certainly do not agree, we would not have to agree, in the area of Mexican legislation, asylum is something that we consider very relevant and that we will always respect,” Ebrard said.

Rep. Rashida Tlaib — one of the four Democratic congresswomen at the center of President Trump's racist tweets — spoke to CNN on her way into a hearing today.

“I’m not gonna go allow him to distract me from the work of representing the third poorest congressional district in the country. I’m going to go in here and hold this administration accountable,” she said.

Reps. Alexandria Ocasio-Cortez and Ayanna Pressley declined to comment prior to a news conference scheduled for 5 p.m. ET. 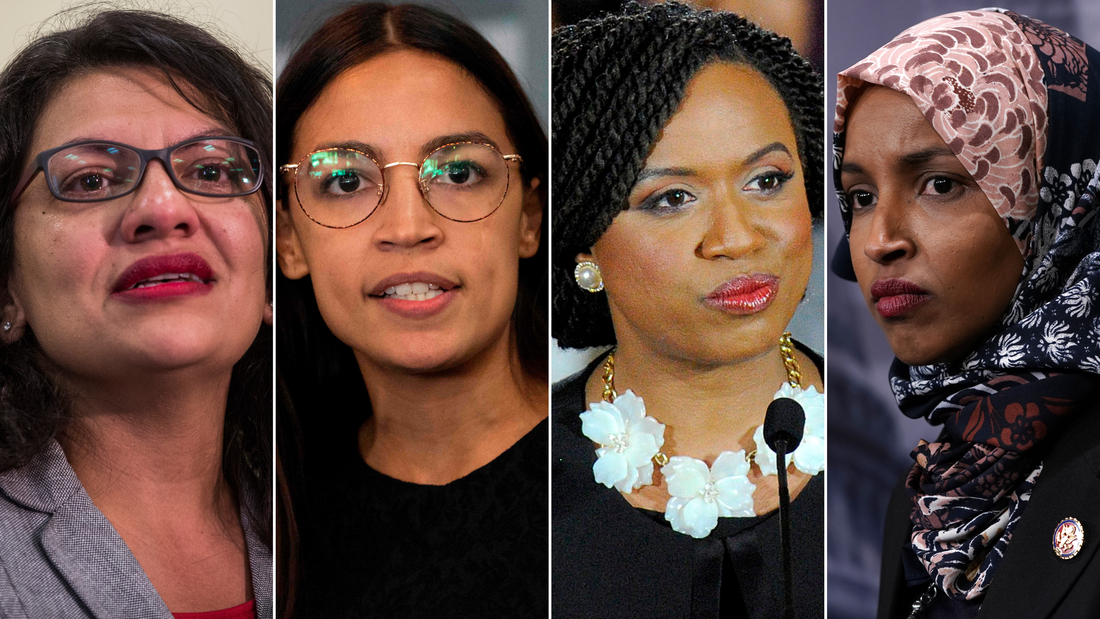 The four Democratic congresswomen at the center of President Trump's racist tweets will hold a news conference at 5 p.m. ET today.

The group of Democrats — Reps. Ilhan Omar of Minnesota, Alexandria Ocasio-Cortez of New York, Rashida Tlaib of Michigan and Ayanna Pressley of Massachusetts — are all women of color and have been outspoken about Trump's immigration policies. Last week, they condemned the conditions of border detention facilities.

At a news conference today, Trump himself denied his attacks on the four women were racist.

Asylum negotiations between Guatemala and the United States have hit a roadblock.

This all comes after a meeting between the two leaders Monday had to be re-scheduled. The two presidents were reported to be getting close to reaching a deal on Guatemala becoming a “safe third country” for asylum seekers, according to multiple US sources familiar with the negotiations.

What it means to be a "safe third country"

Under the agreement, migrants passing through Guatemala would have to apply for asylum there, rather than continuing to the US – this would likely have the effect of preventing and deterring some migrants from applying for asylum in the United States at all.

The United Nations' refugee agency defines "safe country," in part, as "being countries in which refugees can enjoy asylum without any danger."

Before reaching an agreement, the US is working to make sure there are sufficient protections in place for people who would claim asylum in Guatemala, according to an administration official.

Trump has tried to negotiate a deal like this before. At the beginning of June, Trump dropped tariffs on Mexican goods after the two countries came to an agreement about immigration.

Mexico's Foreign Minister Marcelo Ebrard said they moderated some of the US' requests, such as entering a safe third country agreement, but instead allowed others such as an expansion to part of the Immigration and Nationality Act that would return asylum seekers to Mexico for the duration of their immigration proceedings.

White House principal deputy press secretary Hogan Gidley just offered a statement to CNN, as the Trump administration is moving to dramatically limit the ability of Central American migrants to claim asylum if they enter the United States by land through Mexico.

"If you are fleeing an oppressive government and have a legitimate claim to asylum, then you will receive it, but about 90 % of these claims are proven fraudulent in court. While Congress refuses to act, the President is looking at all available legal options to restore integrity to the immigration system, ensure those who deserve asylum get it, and most importantly, protect the American people.”

Here's what the Republican lawmaker said:

“The President is frustrated by the ridiculous and dangerous positions of the Left: free healthcare for illegal immigrants, calling detention facilities ‘concentration camps,’ saying ‘walls are immoral,’ calling to abolish ICE and DHS, advocating for a borderless hemisphere, saying they ‘wouldn’t oppose’ non-citizens voting, raising a Mexican flag at an ICE facility in Colorado, and attempting to blow up an ICE facility in Tacoma, WA. Of course he’s not racist!”

Asked today about the President's comments, here's what some Republican lawmakers said: