President Trump's 2020 campaign manager Brad Parscale called the Ukraine drama and the impeachment inquiry "another hoax from Democrats and the media."

"The facts prove the President did nothing wrong," he said in a statement. "The fact is that the President wants to fight the corruption in Washington, where the Bidens, the Clintons, and other career politicians have abused their power for personal gain."

Reminder: There is no evidence of wrongdoing by Joe Biden or his son, Hunter.

The Trump campaign also sent out a fundraising email with the subject line "total smear job." The body of the email leads with news that the Democrats have launched an impeachment inquiry and asked people to contribute to the "Official Impeachment Defense Task Force."

"This is only the beginning of yet ANOTHER nasty Witch Hunt against me, and we need to fight back BIGGER and STRONGER than ever before," the email from Trump read.

On a call with outside allies this morning, White House officials encouraged surrogates to stress that there was no quid pro quo on Trump's call with the Ukrainian president.

They're also encouraged to stress that President Trump decided to release the transcript to combat “disinformation.”

The White House urged allies to argue that the President’s conversations with foreign leaders are not themselves intelligence activities and therefore not under the jurisdiction of the Office of the Director of National Intelligence. Nonetheless, White House officials on the call also pushed allies to argue that the whistleblower complaint has been handled “by the book.”

The White House surrogates call did not involve much in the way of a broader argument against impeachment, however. Rather, White House officials focused on specific rebuttals to the limited issue of the Ukraine phone call.

A senior White House official clarified how the transcript was crafted:

"The transcript was developed with assistance from voice recognition software along with note takers and experts listening."

More context: Earlier today, Schiff sent a letter to the attorney general demanding information on the handling of the whistleblower complaint. Schiff claims that should the Justice Department’s previously stated position — which said “the disclosure in this case did not concern allegations of conduct by a member of the Intelligence Community or involve an intelligence activity under the DNI’s Supervision” — be allowed to stand, it could have “serious corrosive consequences for whistleblowing within the IC and the Committee’s exercise of its lawful oversight duties.”

In a tweet, House Judiciary Chairman Jerry Nadler called on Attorney General Bill Barr to recuse himself “until we get to the bottom of this matter.”

More context: In the transcript of the call, Trump told the Ukrainian president: "I would like to have the Attorney General call you or your people and I would like you to get to the bottom of it." 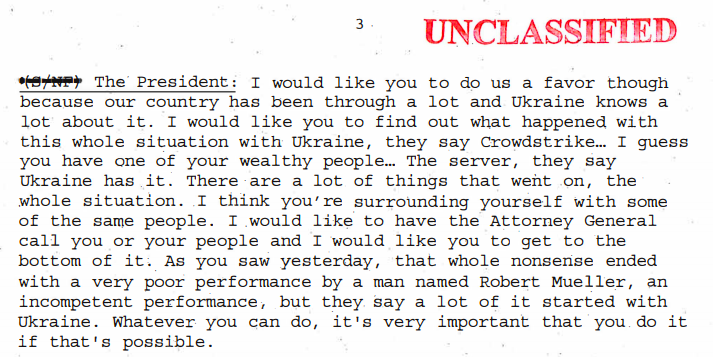 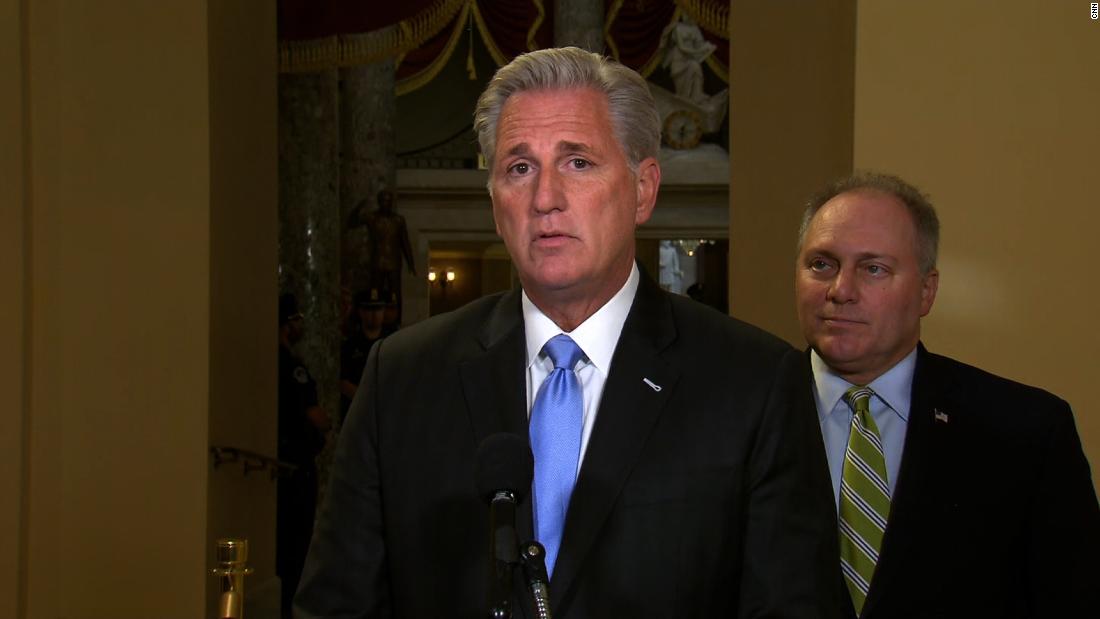 House Republicans just wrapped a news conference. They quickly exited when the press started asking questions about the transcript of the call, not having realized that it had been released.

McCarthy also slammed Pelosi for making the call “based on facts she never read and a whistleblower that wasn’t in the room,” and was critical that there was “not one word” about allegations against Joe Biden and his son. 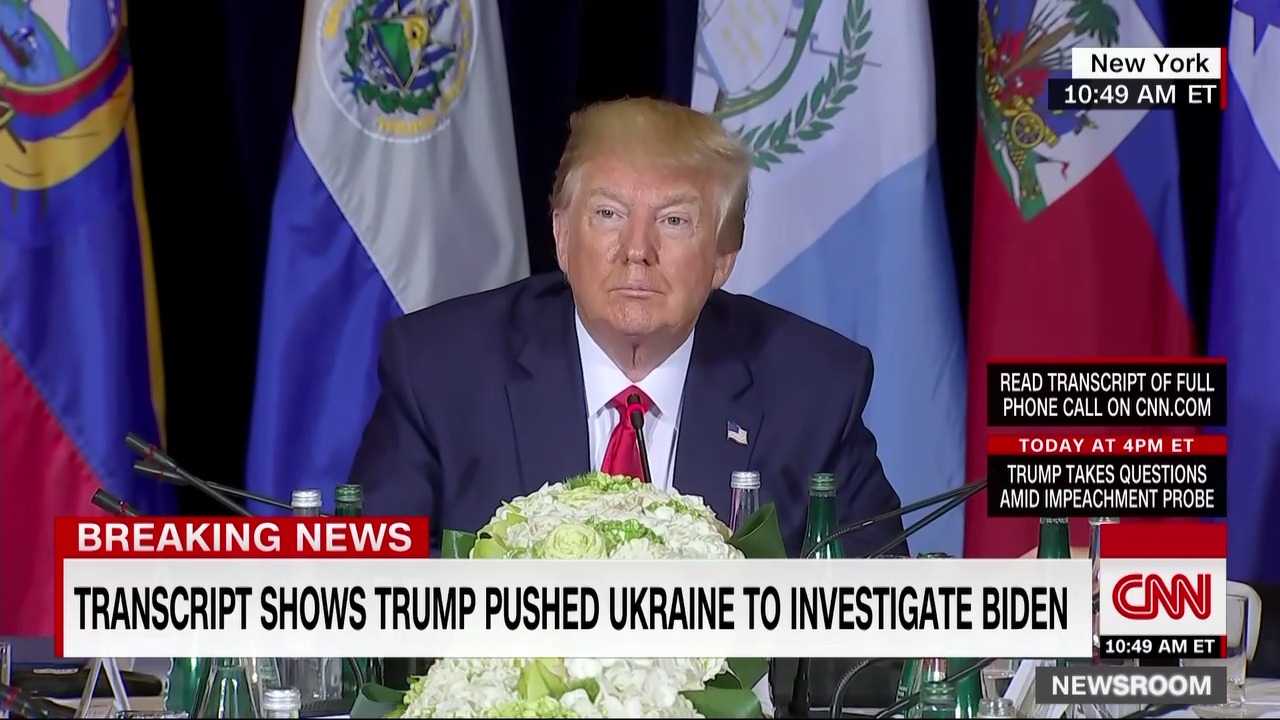 President Trump, speaking about the just-released transcript of his July call with the Ukrainian president, insisted there was "no pressure."

“It was a friendly letter," Trump said referencing the transcript. "There was no pressure, the way you had it built up, that call, it was going to be the call from hell."

He added: "It turned out to be a nothing call other than a lot of people said, 'I never knew you could be so nice.'"

Trump said the impeachment inquiry is a "witch hunt."

What the transcript shows: President Trump repeatedly pushed for the Ukrainian president Volodymr Zelensky to reopen an investigation of his potential 2020 rival, former Vice President Joe Biden and his son, and asked the Ukrainian leader to work with Rudy Giuliani and Attorney General William Barr on the issue.

"If this is the version of events the president's team thinks is most favorable, he is in very deep jeopardy," she added. 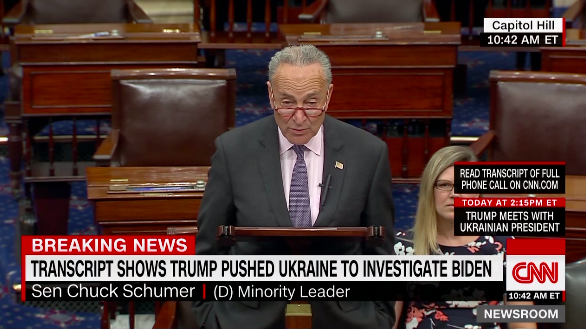 Senate Minority Leader Chuck Schumer spoke on the Senate floor moments ago about the transcript that was just released.

"We must learn what actions President Trump or his aides took to withhold congressionally directed security aid to Ukraine and why, and more besides," Schumer said.

He added: "We must remember the President was reported to have several calls with President Zelensky over the summer, and his reputation -- and his administration has a well-earned reputation for dishonesty, altered facts, and incomplete disclosure in public releases. We need to see the complete, unredacted whistleblower complaint without further delay."