White House press secretary Stephanie Grisham accused Democrats of waiting to send articles of impeachment to the Senate in order to help certain Democratic candidates for president, according to an interview she did with Fox Business.

Grisham, who wasn’t specific in her allegation, said it was something she’s been “wondering about.”

“Sometimes I wonder if all of the timing was to help one of their candidates in the race who gets to be out there working in Iowa,” Grisham said to Fox Business host Lou Dobbs, “and others are working here in DC, so I’ve been wondering about that.”

Grisham went on to defend her boss, President Trump, saying that his critics were just going to “yell words.”

“Russia, Mueller, racism, they’ve used all these words and none of them is sticking because he doesn’t do any of those things, now we’ve got impeachment. So they’re going to continue to yell those words, and it’s only going to make him stronger,” she said.

The press secretary, who hasn’t given a single briefing since assuming her role, also discussed the US-China trade deal and how it “feels to be part of that history.”

Grisham said she continues to be “so proud of this President.”

“It has been very obvious that the more he wins, and the more he does for this country, the more the Democrats are actually working against him which is sad. It’s very sad,” she claimed.

According to Article 1 of the Constitution, senators shall "be on oath or affirmation" when they try impeachments. The oath is spelled out in Rule XXV and specifically mentions impartiality. 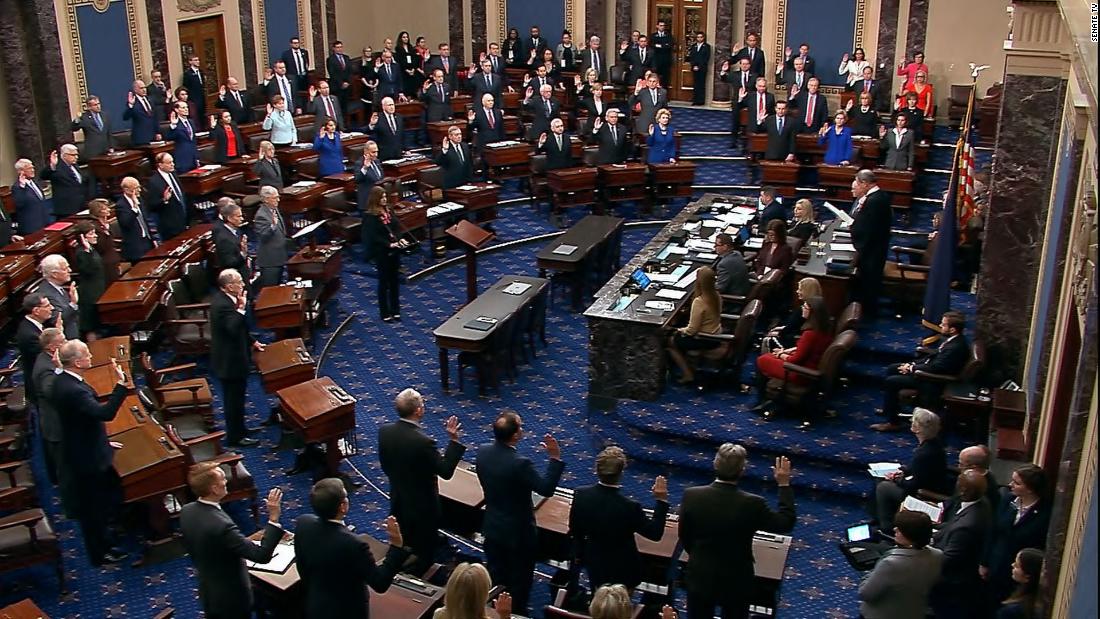 On Thursday, it became official: The Senate impeachment trial into President Donald Trump is underway.

While the ultimate outcome seems predetermined — it's very hard to see 67 senators voting for Trump's removal — that doesn't mean the way we get from here to there doesn't matter and won't be potentially politically consequential.

While 67 votes are necessary to remove Trump, the rules governing the proceedings — including the question on whether witnesses should be called — are determined by a simple majority. Which means that any coalition of 51 senators can overrule the wishes of Senate Majority Leader Mitch McConnell and, by extension, Trump.

With that in mind, here's a look at eight senators to keep an eye on as the trial continues:

Reporters on Capitol Hill are facing a security crackdown that limits their ability to question US senators during the impeachment trial of President Trump.

Sarah Wire, the chair of the Standing Committee of Correspondents, a group that represents reporters on Capitol Hill, told CNN Business that several measures that curtail reporters' access were implemented today.

One measure prohibits reporters from walking with senators and questioning them as the lawmakers are in transit from the Capitol Hill basement to the elevator, a common practice in the US Capitol. Another measure forces reporters behind roped off lines and into pens, hindering their ability to approach senators and ask questions, another common practice.

Such restrictions, which aid senators who wish to avoid the press, were not communicated to journalists ahead of time as typically expected, Wire told CNN Business.

"Reporters [are] learning about the restrictions in real time," Wire said.

Some more context: In a letter sent on Tuesday to Senate Majority Leader Mitch McConnell and Minority Leader Chuck Schumer, the Standing Committee of Correspondents, said it "vigorously" objected to such restrictions.

"Capitol Hill is one of the most accessible places in Washington, but the proposed restrictions exceed those put in place during the State of the Union, Inauguration Day or even during the Clinton impeachment trial 20 years ago," the letter said.

Pence called Parnas' charge that he was aware that all outreach to Zelensky was about getting Ukraine to investigate the Bidens “completely false.”

What is this all about: Parnas — the Soviet-born businessman whose work in Ukraine with Giuliani stands at the center of the impeachment inquiry — implicated the President yesterday in an interview with CNN.

Parnas, who was indicted on campaign finance charges last year, said that their efforts were "all about 2020" and not about working in the interest of the United States.

Parnas also alleged that Pence did not attend Ukrainian President Volodymyr Zelensky's inauguration because Ukraine had not announced an investigation into Joe Biden.

President Trump strongly supported his personal attorney, Rudy Giuliani, while speaking to reporters in the Oval Office, calling him “one of the great crime fighters in the history of our country.”

When asked about a letter that Giuliani allegedly wrote that says the President was aware of his activities in Ukraine, Trump said he wasn’t aware of it.

“I don’t know anything about the letter, but certainly Rudy is one of the great crime fighters in the history of our country,” the President said.

“He was also the greatest mayor in the history of the New York,” he added.

“Having him on my side is a great honor for me,” Trump continued, saying that Giuliani did a, “phenomenal job over a long period of time in fighting crime.”

“I didn’t know about a specific letter, but if he wrote a letter it wouldn’t be a big deal,” Trump said.

In his tweet, Vought said the administration “complied with the law at every step.”

Vought was subpoenaed by House committees during the House impeachment inquiry last year but never appeared.

We’re on Capitol Hill, where the third Senate impeachment trial of a US president has officially begun.

CNN’s Lauren Fox is there. What questions do you have for her?

He added that “no witnesses would be a dramatic break with precedent.”

During a news conference, Schumer said he expects votes on Tuesday to try to force Republicans to take a position on witnesses. But he said he won’t know for sure until he sees Senate Majority Leader Mitch McConnell’s organizing resolution.

About Parnas and the report: Parnas, the Soviet-born businessman whose work in Ukraine with President Trump's personal attorney Rudy Giuliani stands at the center of the impeachment inquiry, implicated the President Wednesday in an interview with CNN in which he said that their efforts were "all about 2020" and not about working in the interest of the United States.

Earlier today, the GAO said the Trump administration broke the law when it withheld US security aid to Ukraine last year that had been appropriated by Congress, a decision that's at the heart of the House's impeachment case against Trump.

The GAO, a nonpartisan congressional watchdog, said in a decision that the White House budget office violated the Impoundment Control Act, a 1974 law that limits the White House from withholding funds that Congress has appropriated.