The Senate impeachment trial of President Trump — only the third impeachment trial in US history — kicked off in earnest today. While there were procedural moves in the trial last week, today marked the first serious day of trial.

Here's what you need to know about how the day played out: 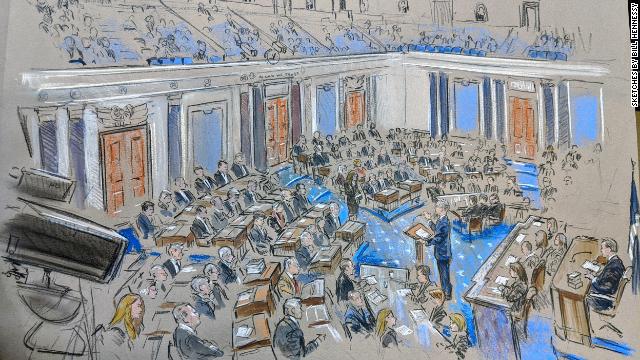 The Senate has adopted the rules for the impeachment trial of President Donald Trump on a party line vote of 53-47.

The vote comes after nearly 13 hours of debate. Senate Minority Leader Chuck Schumer proposed 11 amendments to the rules, all of which were killed by Senate Republicans.

The Senate adjourned for the end of the first day of the trial right after the vote.

Read more on the day here

The Senate is now voting on whether to adopt Majority Leader Mitch McConnell's proposed rules for President Donald Trump's impeachment trial. The vote comes after more than 12 hours of debate and discussion over the rules and 11 amendments proposed by Democrats, all of which were killed by Senate Republicans.

The Senate has killed the 11th, and final, proposed amendment to the Senate impeachment trial rules that was brought by Senate Minority Leader Chuck Schumer. The final one would have given Chief Justice John Roberts power over subpoenaing witnesses and documents, instead of leaving it to a vote of the Senate.

The final amendment died, as did nearly all of the first 10, along party lines. The vote was 53-47.

Senate Minority Leader Chuck Schumer introduced his 11th proposed amendment to the rules of President Donald Trump's impeachment trial early Wednesday and said it would be his last. The previous 10 had all been defeated either on, or mostly on, party lines.

The 11th amendment would allow Chief Justice John Roberts to decide on whether to allow motions on subpoenas for witnesses and documents.

The Senate just voted to kill the 10th amendment proposed to the rules for President Donald Trump's impeachment trial. This amendment dealt with the amount of time allotted for written motions and responses during the trial.

That amendment was -- like the previous nine -- defeated, but this one wasn't completely on party lines: It went down 52-48. Maine Sen. Susan Collins was the lone Republican to cross party lines and vote with the Democrats.

Senators were definitely at the end of their rope during the debate over the ninth proposed amendment to the rules of the impeachment trial. The corner of the chamber has become a popular spot on both sides for congregating, pacing and quiet conversations.

Sens. Amy Klobuchar, Democrat of Minnesota, and Sen. Kirsten Gillibrand, Democrat of New York, huddled while House impeachment manager Jerry Nadler was talking, and Sen. Bernie Sanders wound up there pacing back and forth.

Several senators are struggling to keep their eyes open, including Gillibrand.

The managers had to find a way to pass the time too. Rep. Zoe Lofgren, Democrat of California, grabbed the special badge for the impeachment trial from a House Judiciary Committee aide to inspect it.

Sens. Susan Collins, Republican of Maine, and Lisa Murkowski, Republican of Alaska, sat intently listening to Nadler, and did not react when he accused Republicans of a cover up with their votes today.

Nadler also did not react when President Donald Trump's legal team attacked him by name. He took notes while they criticized him, staring straight ahead at his aides across the table.

The Senate killed another proposed amendment to Senate Majority Leader Mitch McConnell's proposed rules for the impeachment trial of President Donald Trump, this one to force votes on witnesses and documents.

The Senate voted 53-47 along party lines to kill a proposal from Senate Minority Leader Chuck Schumer that would have issued a subpoena for President Donald Trump's former national security adviser John Bolton's testimony.

Bolton has said he would testify if subpoenaed in the trial, and that still may come if a majority of senators vote to issue a subpoena later on in the trial. The amendment discussed Wednesday would have inserted the subpoena into the rules of the trial itself.

Schumer has asked for eight amendments to Senate Majority Leader Mitch McConnell's proposed rules for the impeachment trial and all have been defeated on party lines.