Our live coverage has ended. Go here to read more about the impeachment trial of President Trump.

Given yesterday's report from the New York Times that a manuscript of John Bolton’s unpublished book alleges President Trump linked aid to Ukraine with investigations into Democrats, including Joe Biden, the former national security adviser looms large over the impeachment trial of President Trump.

Throughout this morning, senators were pressed by reporters about whether they would vote to call Bolton to testify at Trump’s trial.

But Trump’s defense team did not mention Bolton’s name in its initial arguments.

Trump lawyer Jay Sekulow appeared to nod toward Bolton in his own early comments on Monday, saying: “We deal with transcript evidence, we deal with publicly available information. We do not deal with speculation, allegations that are not based on evidentiary standards at all.”

Sekulow repeated the list of six arguments the President’s defense team introduced in its initial presentation on Saturday. One of the six items was this: “Not a single witness testified that the President himself said that that there was any connection between any investigation and security assistance, a presidential meeting or anything else.”

Sekulow’s claim was not false, since Bolton was not a witness in the House impeachment process — having declined a Democratic request to appear voluntarily. But it is still possible the Senate will vote to subpoena Bolton in the ongoing trial.

“In this trial, in this moment, Mr. Giuliani is just a minor player, that shiny object designed to distract you,” Raskin said. “Senators, I urge you most respectfully, do not be distracted.”

This ignores testimony from several witnesses, who said the President directed them to coordinate with Giuliani on Ukraine policy. It also ignores the fact that Giuliani’s name came up six times during Trump’s July 25 phone call with Ukrainian President Volodymyr Zelensky.

Here are all the times Giuliani was mentioned in the call:

Jane Raskin, one of President Trump's lawyers, argued that the House managers are focused on the President's private attorney Rudy Giuliani to "distract from the fact that the evidence does not support their claims."

"If both the law and the facts are against you, present a distraction, emphasize the sensational fact or perhaps a colorful and controversial public figure who appears on the scene, then disport certain facts and ignore others, even when they are the most problem probative, make conclusory statements and insinuate the shining object is far more important than the actual facts allow. In short, divert attention from the holes in your case," she said.

During the short break, Democratic Minority Leader Chuck Schumer refuted the Trump defense team's claim that none of the Democrats' witnesses spoke to the President himself about Ukraine.

"[Jay] Sekulow said when he listed his five points, not a single witness said they heard from POTUS himself. We want Bolton, we want Mulvaney. We can solve Mr. Sekulow’s problem of not hearing from the witnesses themselves," Schumer said.

"It’s a little like Watergate in that every week more evidence comes out further condemning the president. Obviously, the New York Times revelations strengthens the case. The average American is saying why don’t they want witnesses and documents?" Schumer said.

Asked if he thought the House should subpoena the manuscript or Bolton, he said, "That’s going to be up to them. I’m not going to give them advice." 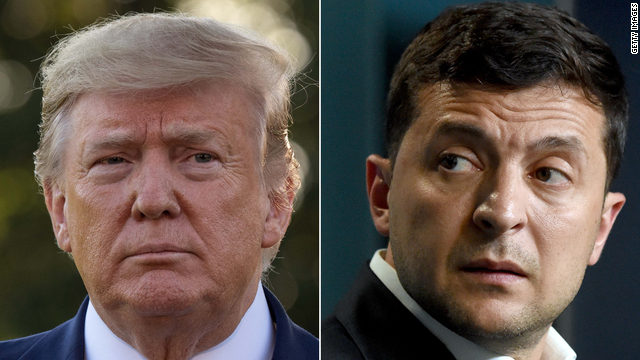 Deputy White House Counsel Michael Purpura downplayed allegations that President Trump withheld a White House invitation from the new Ukrainian president as leverage to secure investigations into his political rivals. The allegations of a quid pro quo are at the center of the abuse-of-power charge against Trump, and have been supported by witnesses who testified in the House.

But Purpura said this narrative was “nonsense” because Ukraine didn’t announce investigations, and Trump met with Ukrainian President Volodymyr Zelensky in September, on the sidelines of the United Nations General Assembly.

“You are probably wondering, how could the House managers claim that there was a quid pro quo for a meeting with President Trump when the two presidents actually did meet without President Zelensky announcing any investigations?” Purpura asked.

Purpura continued, “Well, the House managers moved the goalposts again. They claimed the meeting could not be just an in-person meeting with President Trump, what it had to be was a meeting at the Oval Office and in the White House. That's nonsense.”

But this argument glosses over the differences between a short meeting at the UN and the symbolic value of a White House visit.

Remember: Some witnesses testified in the House inquiry that Zelensky wanted an invitation to the White House because it was important for him to send a signal to the Kremlin, and other adversaries, that his new administration in Ukraine had strong support from the US.

Purpura’s comments ignores several relevant statements from Zelensky himself, who repeatedly told Trump that he wants to visit Washington specifically. This happened in both of their phone calls last year, according to rough transcripts released by the White House. Zelensky even made a joke during their meeting in New York that Trump “forgot” to give him a date for the DC visit.

Later in the call… 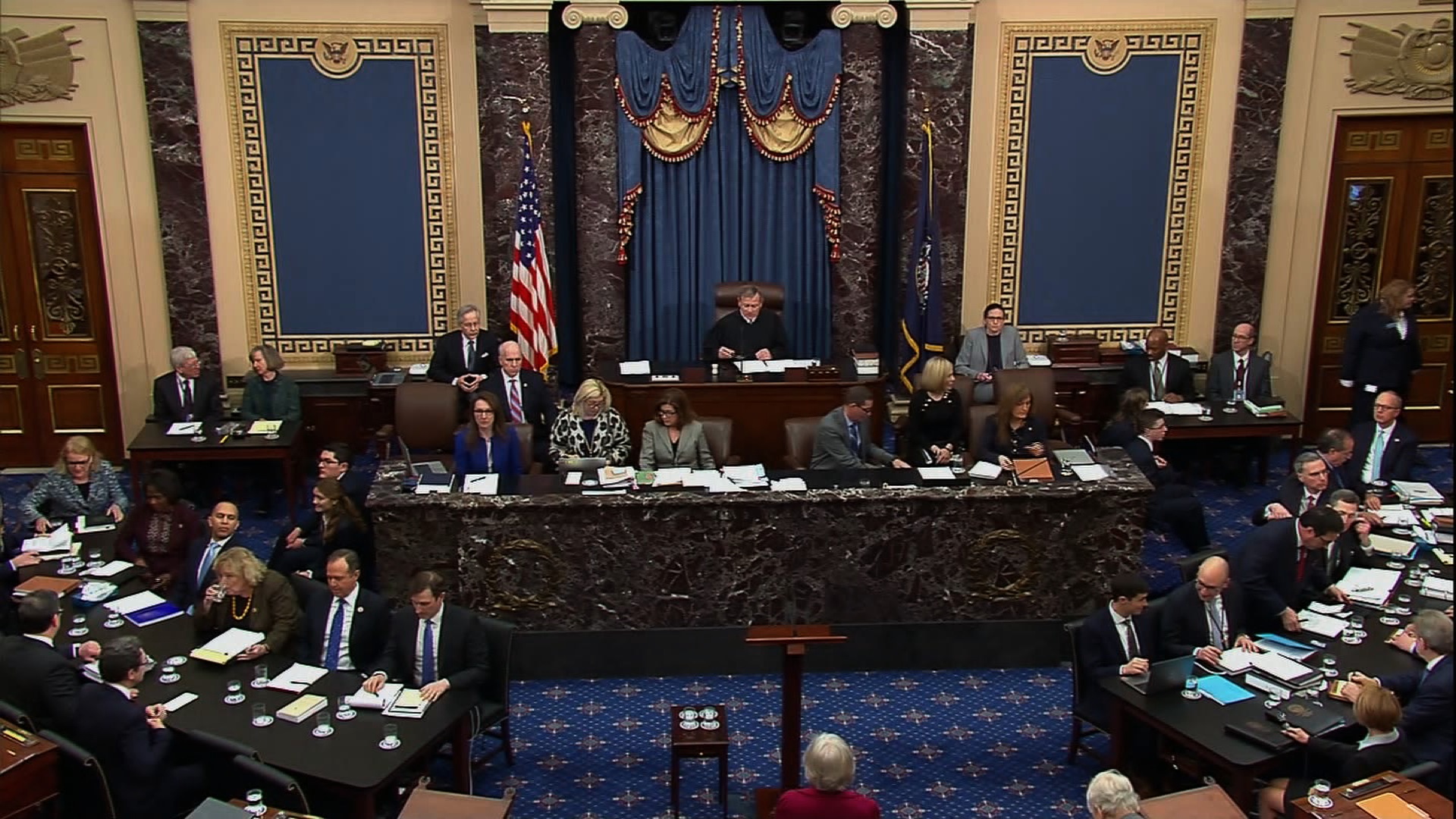 The Senate is back from a brief break. President Trump's legal team will continue to give their opening arguments.

In the hours after the New York Times broke the John Bolton story, Republican senators began reaching out to the White House to control the damage.

Both Sens. Lindsey Graham, a Republican from South Carolina and ally of Trump’s, as well as Majority Leader Mitch McConnell were in communication and there was an expressed view that the GOP Senate should have been kept in the loop.

One message conveyed to the White House, according to a GOP senator with knowledge of the conversations, was that Republicans were on the front lines of the trial and for them to be left without all available information was “malpractice.”

One source told CNN that the National Security Council statement came as a result of conversations with GOP senators. That statement made it clear that only a small number of people would have had access to the manuscript.

“Ambassador Bolton’s manuscript was submitted to the NSC for pre-publications review and has been under initial review by the NSC. No White House personnel outside NSC have reviewed the manuscript,” the NSC statement said.

The message was also that the President’s team needed to defend the President, but lean less into focusing on what Trump did or did not do, and instead focus on why what is alleged to have happened did not rise to the level of impeachment.

In the last week, GOP leaders have pressed upon their members that the outcome of this impeachment is inevitable. Trump won’t be removed from office. Therefore, a prolonged fight over witnesses, court battles, and continued paralysis of the Senate chamber is just more pain for an outcome that isn’t going to change. Members appeared to be coming around to that, and largely, seem to be in the same place today. But, the Bolton news shook that rationale, and GOP senators close to the White House needed to remind the President’s team that the job of keeping the party in line can’t happen if there are going to be unnecessary surprises.

The jolt to the conference was apparent in the hours after the Bolton draft was disclosed, aides said, with rank-and-file senators scrambling to figure out the ramifications. It’s part of what drove McConnell’s message in the closed door Senate GOP lunch Monday – one summarized by multiple senators in attendance as “take a deep breath.”

During the first hour of the defense’s argument today, Republican senators and some Democrats took copious notes.

Everyone appeared present and attentive. There were no absences or fidget spinners.

Republican Sens. Lisa Murkowski and Susan Collins took notes as Trump attorney Ken Starr spoke and said “instead of a once in a century phenomenon, which it had been, presidential impeachment has become a weapon to be wielded against ones political opponent.”

GOP Sen. Mitt Romney picked up his pen when Starr emphasized that Nixon’s impeachment was the first in 100 years.

When Starr added that Nixon’s impeachment was “powerfully bipartisan,” Republican Sen. Lamar Alexander also picked up his pen. Alexander jotted notes when Starr noted a minute later that impeachment “divides the country like nothing else.”

The Senate impeachment trial is now taking a short break. When they come back, President Trump's legal team will continue its opening arguments.