Our live coverage has ended. Go here to read more about the impeachment trial of President Trump. 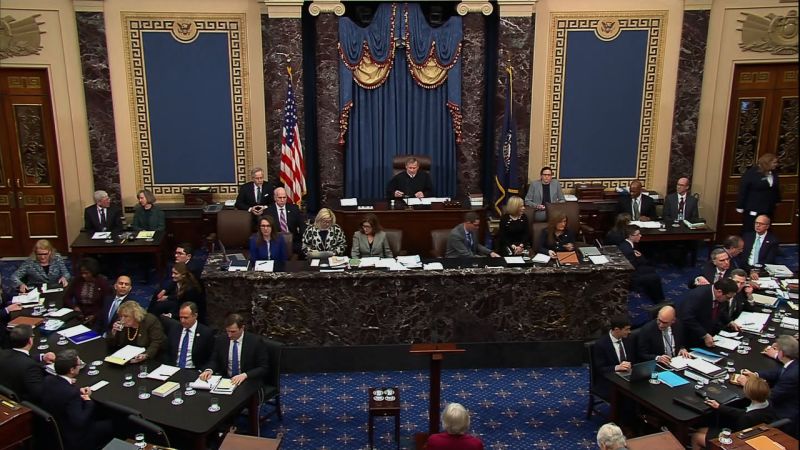 President Trump's defense team continued their opening arguments today in the impeachment trial as senators tackled questions about the need for witnesses.

In case you missed it, here are some of the highlights from today's proceedings:

The Senate impeachment trial will resume at 1 p.m. ET tomorrow.

Earlier today, Jay Sekulow, the President’s private counsel, alluded to bombshell allegations over the weekend from former national security adviser John Bolton directly tying Ukraine aid to an investigation of the Bidens. But he suggested it would not be discussed by the team today.

"What we've done on Saturday is the pattern that we're going to continue today as far as how we're going to deal with the case. We deal with transcript evidence, we deal with publicly available information. We do not deal with speculation, allegations that are not based on evidentiary standards at all," he said.

What's this about: The New York Times reported Trump ordered Bolton to keep military aid to Ukraine frozen in a bid to coerce political favors. Since the news broke, some GOP senators are considering the need to have witnesses at the trial.

During his remarks tonight, President Trump's attorney Alan Dershowitz talked about how he saw the impeachments of Trump and Clinton as different — and how the charges against Trump led him to change his mind about what constitutes an impeachable offense by a president.

On former president Bill Clinton, Dershowitz said, "Clinton was accused of a crime, perjury, and so the issue in his case was not whether the Constitution requires a crime for impeachment, instead, the engine was whether Clinton's alleged crime could be classified as a high crime in light of its personal nature."

He continued: "During the Clinton impeachment, I stated in an interview that I did not think that the technical crime was required but that I did think that abusing trust could be considered."

Dershowitz said that at the time of Clinton's impeachment, he had not done "extensive research on that issue" of whether criminal behavior was required to impeach a president. "I simply accepted the academic consensus on an issue that was not on the front burner at the time," he said.

With Trump, Dershowitz said his impeachment "directly raises the issue of whether criminal behavior is required."

"I've gone back and read all the relevant historical material, as nonpartisan academic should always do, and have now concluded that the framers did intend to limit the criteria for impeachment the criminal type backs akin to treason, bribery, and they certainly did not intend do extended to vague an open-ended non criminal accusations such as abuse of power and obstruction of Congress."

President Trump, she said, has been “very, very happy” with his legal team, touting a “strong team with decades of legal experience.”

On Bolton, Grisham called it “unfortunate” and “disappointing” that the former White House national security adviser is “clearly trying to sell a book,” noting that the preorder link was live moments after the New York Times story published.

She also questioned whether Bolton was telling the truth.

“We don’t even know if what’s in the book is going to be true,” she said, adding, “The President has made clear that none of the things in the book are true.”

The proposal for witness reciprocity is not something most GOP senators are actively pursuing and it is essentially a backup plan in case enough Republicans vote to hear witnesses, Republican Sen. Mike Braun said.

“First of all, Ted (Cruz) and I have been talking about reciprocity on witnesses and anybody that has talked (has said) if we get to witnesses. That was never going to occur in a vacuum ... it wasn’t even discussed really, it was discussed if we get there, that’s the how it would be. I don’t think Pat originated it, he just, I guess, would be comfortable with it," the Indiana lawmaker said.

Earlier today: Sen. Pat Toomey, a Republican from Pennsylvania, raised the "one for one" witness deal that would allow for one witness each to be called by both the Republican and Democratic sides in the Senate impeachment trial at the GOP conference lunch today, a source familiar told CNN.

President Trump's impeachment attorney Robert Ray concluded his opening remarks with what the President told him.

"The President's only instruction to me for this trial was a simple one: 'Do what you think is right,'" Ray said.

Ray added that he does not believe that Trump's impeachment is in "the best interests of this country."

Asked about GOP Rep. Mark Meadows’s suggestion that the New York Times story on John Bolton was a coordinated leak from Democrats and if he was in any way involved in the leak, House impeachment manager Rep. Adam Schiff said he was not.

“Of course not,” Schiff said, “It came as quite a surprise to all the House managers when the New York Times story came out, but I guess that’s the best Representative Meadows has right now. Look I can understand the reasons why — and I think we knew these already — why the President and his allies have wanted to suppress John Bolton’s testimony. They evidentially had this manuscript, they understood what John Bolton had to say and they were deathly afraid the American people would find out."

Schiff continued: "There seems to be a real shift in where the Republican senators are and I think it’s very hard for them to maintain that they wanted a fair trial, wanted to know all the facts when there’s a witness who said I’m ready, I’ve got something to say, we have an outline of what he has to say, it’s really hard to say we’re not going to hear that.”

Asked if the House would reconsider bringing in former White House national security adviser John Bolton if the Senate decides not call trial witnesses, House Majority Leader Steny Hoyer said they would consider it, but he wouldn’t speculate beyond that.