Our live coverage has ended. See how the day unfolded in the posts below.

The House impeachment managers plan to conclude their case against former President Trump on Thursday by zeroing in on Trump’s lack of remorse following the deadly attack and going further into the role he played, according to senior aides on the impeachment team.

The managers also intend to examine the harm that the attack caused to the people in the Capitol, including beyond just the physical scars, the aides said.

They will discuss the legal issues surrounding the case, according to the aides, in what will likely be a prebuttal to the arguments they expect to hear from Trump’s legal team when the defense presentation begins.

The aides would not get into specifics on the evidence they plan to present today, or whether they will show any additional new video of the Capitol riots.

As the House impeachment managers continued their presentation yesterday evening, they placed the blame for the mob's pursuit of Vice President Mike Pence squarely on the shoulders of former President Trump.

"You'll recall Donald Trump had made Vice President Pence a target. He attacked the Vice President at the rallies, in speeches and on Twitter," said impeachment manager Rep. Joaquin Castro, adding "and during President Trump's speech that morning of the attack, he ramped it up again."

Noting that Trump directed his supporters' ire at his vice president on nearly a dozen occasions, Castro then quoted the former President, reading a snippet from Trump's Jan. 6 morning rally.

"Mike Pence, I hope you're going to stand up for the good of our Constitution and for the good of your country. And if you're not, I'm going to be disappointed in you," read Castro, sharing Trump's words.

Castro went on to explain the impact those words had on the mob.

"By 2:15 p.m., the crowd was chanting in unison, 'Hang Mike Pence,' outside the very building he'd been evacuated from with his family," said Castro.

And as the insurrectionists continued to threaten Pence, Trump failed to temper the situation. Rather, said Castro, he enflamed it.

"He fueled the fire," said Castro, further laying out the afternoon timeline. "At 2:24 p.m. [Trump] tweeted 'Mike Pence didn't have the courage to do what should have been done to protect our country and our constitution.'"

"The insurgents amplified President Trump's tweet, attacking the vice president with a bullhorn," Castro said. "Some of these insurgents were heard saying 'that they hoped to find Vice President Mike Pence and execute him, by hanging him from a Capitol Hill tree as a traitor.'"

Finally, Castro presented a photo, one depicting the US Capitol in the background, with instruments of execution framing the government building.

"They erected a gallows with a noose. This is what Donald Trump incited," he said. "Please, take a close look at that picture. It harkens back to our nation's worst history of lynching. A President's words have the power to move people to action. These were the results." 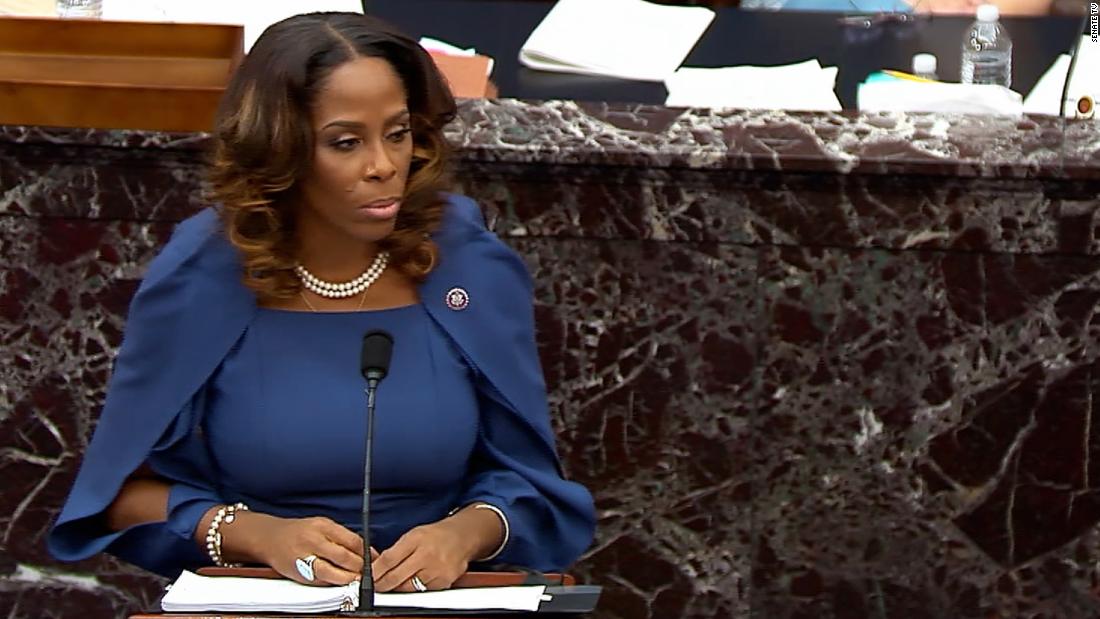 "She was an A student then and an A-plus student now," Raskin said.

Plaskett represents the United States Virgin Islands’ at-large congressional district. During her Senate remarks, she shared a bit of her personal story ahead of detailing the Democrats' arguments against former President Trump.

"I've learned throughout my life that preparation and truth can carry you far. Can allow you to speak truth to power. I've learned that as a young black girl growing up in the projects in Brooklyn, housing community on St. Croix, sent to the most unlikeliest of settings and now as an adult woman representing an island territory speaking to the US Senate," she said.

"And because of truth, I am confident today speaking before you, because truth and facts are overwhelming, that our president, the President of the United States incited a mob to storm the capitol, to attempt to stop the certification of a presidential election," she continued.

Since Plaskett is considered a delegate because she represents a US territory, she is not able cast votes on the House floor and was unable to vote to impeach Trump. Now she is be able to make the case to convict Trump as an impeachment manager for the second trial.

Before her election to Congress, Plaskett served as assistant district attorney for the Bronx District Attorney’s Office and as senior counsel at the Department of Justice. She was also general counsel for the Virgin Islands Economic Development Authority.

The third day of former President Trump's second impeachment trial begins today, and the House impeachment lawyers will once again be front and center as they continue to present their case.

Here's a recap of what has happened so far in the trial, and what comes next:

Yesterday: The impeachment managers kicked off their two-day presentation walking through Trump's months of false statements about election fraud and his refusal to concede, arguing that his speeches were designed to anger and incite his supporters, so they were ready to fight when they marched to the Capitol on Jan. 6.

The managers also aired new Capitol security footage showing how the rioters violently breached the Capitol and the threat they posed to everyone in the building during the riots on Jan. 6 as the managers argued that Trump was responsible for inciting the rioters.

The footage included Capitol Police officer Eugene Goodman running through the Capitol hallways to respond to the rioters, running into Republican Sen. Mitt Romney of Utah to tell him to turn around to safety.

Democratic Del. Stacey Plaskett of the Virgin Islands, one of the nine impeachment managers, walked senators through the security footage, showing where the rioters breached the Capitol and how close they were to Vice President Mike Pence, whom the rioters were targeting.

On Tuesday: House Democrats previewed their case against Trump on the trial's opening day, playing a dramatic and visceral 13-minute video that interspersed disturbing video of the rioters breaching the Capitol, attacking police officers and invoking Trump's name with the President's Jan. 6 speech and tweets.

Trump's legal team has argued that the managers are ignoring Trump's comments on Jan. 6 that the protests should be peaceful, while claiming his call for supporters to fight was figurative political speech protected by the First Amendment.

What comes next: Trump's lawyers will get the chance to respond to the House arguments Friday, and like the House impeachment lawyers, will be allotted up to 16 hours spread over two days to present their cases.

Senators will then have four hours to ask questions submitted in writing to both sides, and the Senate could debate and vote on whether to subpoena witnesses, though it remains unclear whether any will be sought at trial.