The Senate voted 57-43 today to acquit former President Trump of inciting an insurrection at the Capitol on Jan, 6.

Our live coverage of the trial has ended, but in case you missed it, here's what you need to know about today's proceedings:

"They tried to trash our democracy and we revived it, and we protected," he added.

Raskin then pointed to remarks made by Senate Minority Leader Mitch McConnell shortly after the acquittal as proof that they had succeeded in making their argument.

"Senator Mitch McConnell just went to the floor, essentially to say that we made our case on the facts, that he believed that Donald Trump was practically and morally responsible for inciting the events of January 6th. He described it as we did, as a disgraceful dereliction of duty, a desertion of his office."

President Trump’s attorney Michael van der Veen said the House impeachment managers were “like a dying animal that we had trapped in the corner,” when they initially voted to call witnesses in President Trump’s second impeachment trial on Saturday. Ultimately, no witnesses were called to testify in the trial.

“What had happened was the day before we demolished their case, and they were like a dying animal that we had trapped in the corner. And so this morning their last gasp were swinging out at us trying to save their case, and it didn't work,” van der Veen said after the Senate found Trump not guilty of inciting the deadly Jan. 6 riot at the US Capitol.

He added that House managers “didn’t have a case.”

“They shouldn't have brought this impeachment from the beginning. It really does stem from political hatred,” he said.

Van der Veen would not say whether he has spoken with Trump since the acquittal vote, but said the former President was “vindicated” today.

“He had a good day in court today. He was vindicated. He was found not guilty. The political witch hunt that they had, that the Democrats had thrown at him was defeated, so he should feel quite pleased,” van der Veen said.

The Philadelphia attorney said his home was attacked as the trial was ongoing and that his business is “under siege.”

“My home was attacked, I'd rather not go into that. To answer your question, my entire family, my business, my law firm are under siege right now. I don't really want to go into that though,” he said.

GOP Sen. Susan Collins, who was among the Republicans who voted to convict former President Trump, spoke on the Senate floor explaining her vote, saying Trump "incited an insurrection with the purpose of preventing that transfer of power from occurring."

Collins said that Trump’s “actions to interfere with the peaceful transition of power – the hallmark of our Constitution and our American democracy – were an abuse of power and constitute grounds for conviction.”

“The record is clear that the President, President Trump abused his power, violated his oath to uphold the Constitution and tried almost every means in his power to prevent the peaceful transfer of authority to the newly elected President,” she said.

“My vote in this trial stems from my own oath and duty to defend the Constitution of the United States. The abuse of power and betrayal of his oath by President Trump meet the Constitutional standard of high crimes and misdemeanors and for those reasons, I voted to convict,” she said.

“Rather than facilitating the peaceful transfer of power, President Trump was telling Vice President Pence to ignore the Constitution and to refuse to count the certified votes. He was also further agitating the crowd, directing them to march to the Capitol. In this situation, context was everything, tossing a lit match into a pile of dry leaves is very different from tossing it into a pool of water, and on January 6th the atmosphere among the crowd outside the White House was highly combustible, largely the result of an ill wind blowing from Washington for the past two months. President Trump had stoked discontent with a steady barrage of false claims that the election had been stolen from him. The allegedly responsible officials were denigrated, scorned and ridiculed by the President with the predictable result that his supporters viewed any official that they perceived to be an obstacle to President Trump’s re-election as an enemy of their cause,” she said, adding, “That set the stage for the storming of the Capitol for the first time in more than 200 years.” 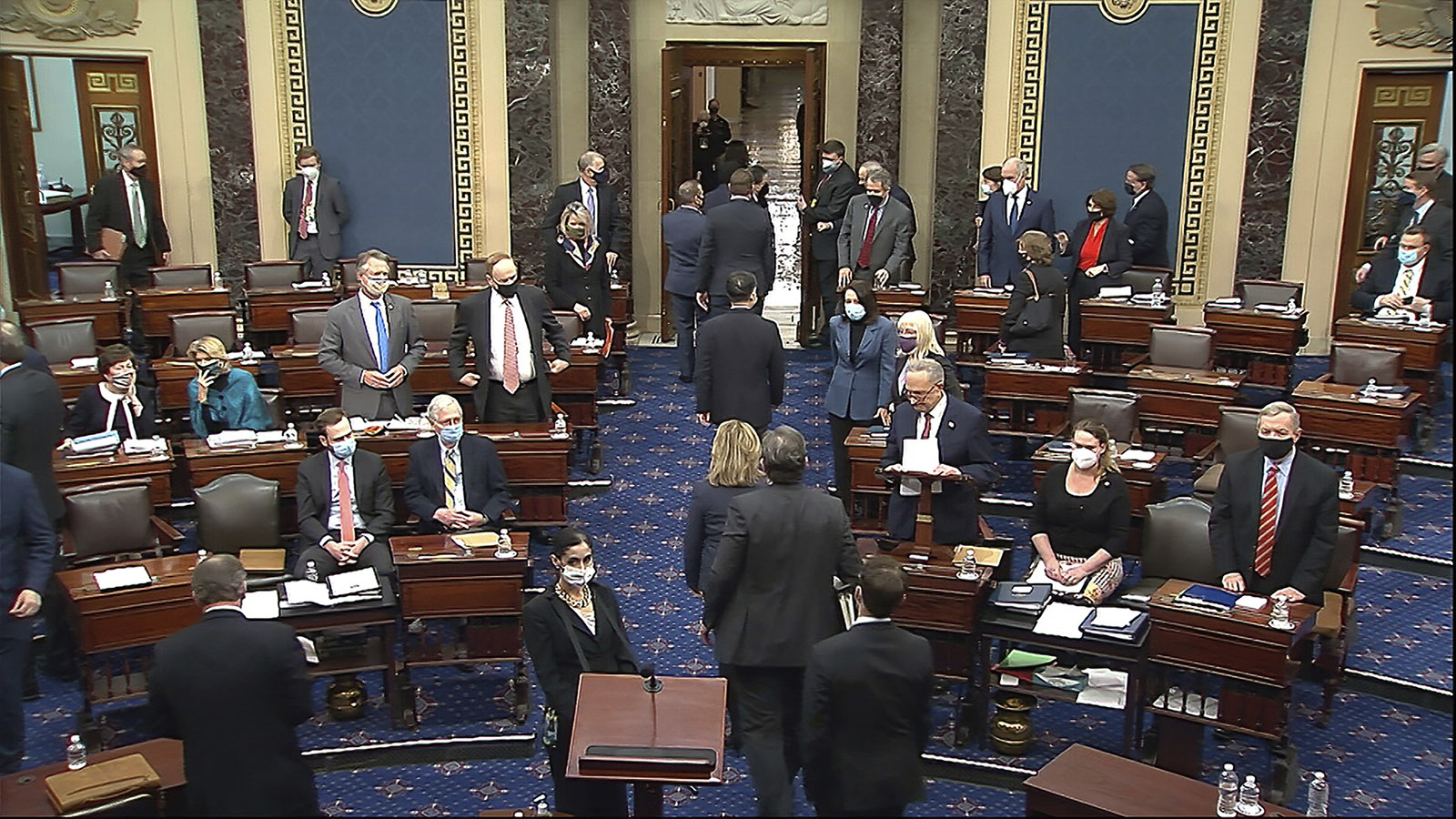 Republicans Sens. Tim Scott and Ben Sasse were sitting in the back of the chamber talking ahead of the final vote and appeared to be guessing who would vote. Scott kept flashing the No. 5 with his hand.

When Sen. Bill Cassidy voted, he stood up, black bag laying on top of his desk, both hands on top of it, and said “guilty.” Cassidy left the room while the "R's" were being called, at around when Democratic Sen. Jacky Rosen was voting.

Republican Sen. John Thune, who ultimately voted not guilty, looked visibly uncomfortable the entire time. His head was in his hands, and he clasped and unclasped his hands several times. He shook his feet beneath him.

When Thune finally voted, his “not guilty” was done in barely audible volume. Murkowski, who sits behind him, shot a glare at the back of his head.

Republican Sen. Rob Portman, who sits behind Republican Sen. Richard Burr, went to Burr when the vote was over and patted him on the back and they started briefly chatting.

On his way out, Burr walked by Sasse, grabbed his arm, and they chatted, almost whispering, for a minute or two.

More on today's vote: The final vote was 57 guilty to 43 not guilty, short of the 67 guilty votes needed to convict.

But the seven Republican senators who voted against former President Trump amounted to a number higher than even Trump's legal team had expected, marking a stark departure from the first impeachment trial where only one Republican, Mitt Romney of Utah, found Trump guilty.

Sen. Patrick Leahy, a Democrat from Vermont, said he understands the important role he played as presiding judge and he worked as hard as he could to be impartial.

“Well, I’ve presided over hundreds of hours before. Nothing like this I, I realized the significance,” he said.

When asked about the seven Republicans who voted to convict, Leahy demurred. “I don’t want to comment on that, I just tried to be as impartial as I possible could in that position.”

Senate Minority Leader Mitch McConnell said if former President Trump was still in office, "I would have carefully considered whether the House managers proved their specific charge."

"But after intense reflection, I believe the best constitutional reading shows that Article II Section 4 exhausts the set of persons who can legitimately be impeached, tried or convicted. It's the president, it's the vice president and civil officers. We have no power to convict and disqualify a former office holder who is now a private citizen," McConnell said.

"Donald Trump's no longer the president. Likewise, the provision states that officers subject to impeachment and conviction shall be removed from office if convicted," he said, emphasizing "from office."

McConnell did not count out the possibility of Trump being tried in civil or criminal courts.

"President Trump is still liable for everything he did while he was in office as an ordinary citizen unless the statute of limitations is run, still liable for everything he did while in office. Didn't get away with anything yet. Yet. We have a criminal justice system in this country. We have civil litigation. And former presidents are not immune from being accountable by either one," he said.

McConnell said the Senate's decision to acquit Trump does not condone the violence on Jan. 6.

"It simply shows that senators did what the former President failed to do. We put our constitutional duty first," he said.

"They did this because they had been fed wild falsehoods by the most powerful man on Earth. Because he was angry. He had lost an election. Former President Trump's actions preceded the riot were a disgraceful, disgraceful dereliction of duty," McConnell said.

"There's no question — none — that President Trump is practically and morally responsible for provoking the events of the day. No question about it. The people who stormed this building believed they were acting on the wishes and instructions of their President," he added.

McConnell said there were "wild myths" about election fraud, but he said he defended Trump's right to bring any complaints to the legal system.

"As I stood up and said clearly at that time, the election was settled. It was over. But that just really opened a new chapter of even wilder, wilder and more unfounded claims," he said. "The leader of the free world cannot spend weeks thundering that shadowy forces are stealing our country and then feign surprise when people believe him and do reckless things."

Trump "did not do his job" to end the Jan. 6 violence, McConnell said.

McConnell called the Trump defense team invoking Trump's voters during the impeachment trial "as a human shield against criticism."

The source expressed relief Democrats did not ultimately call witnesses because they had heard some Republicans were on the fence and they were waiting to hear from witnesses.

The source says they were expecting five or six Republicans to vote for impeachment, but the final vote that included seven GOP members voting to impeach was "unexpected and a shock."