Walking on the colonnade of the Capella Hotel, Kim Jong Un told President Trump many people around the world wouldn't believe what was taking place in Singapore.

"Many people in the world will think of this as a (inaudible) form of fantasy ... from a science fiction movie," Kim told Trump, through a translator.

Kim is currently meeting with President Trump and his top advisers. At the start of the talks, North Korean leader Kim Jong Un acknowledged it wouldn't be a smooth road ahead.

"Of course there are challenges ahead, but I am ("ready" or "willing", unclear) to do this," Kim told the top US leadership. 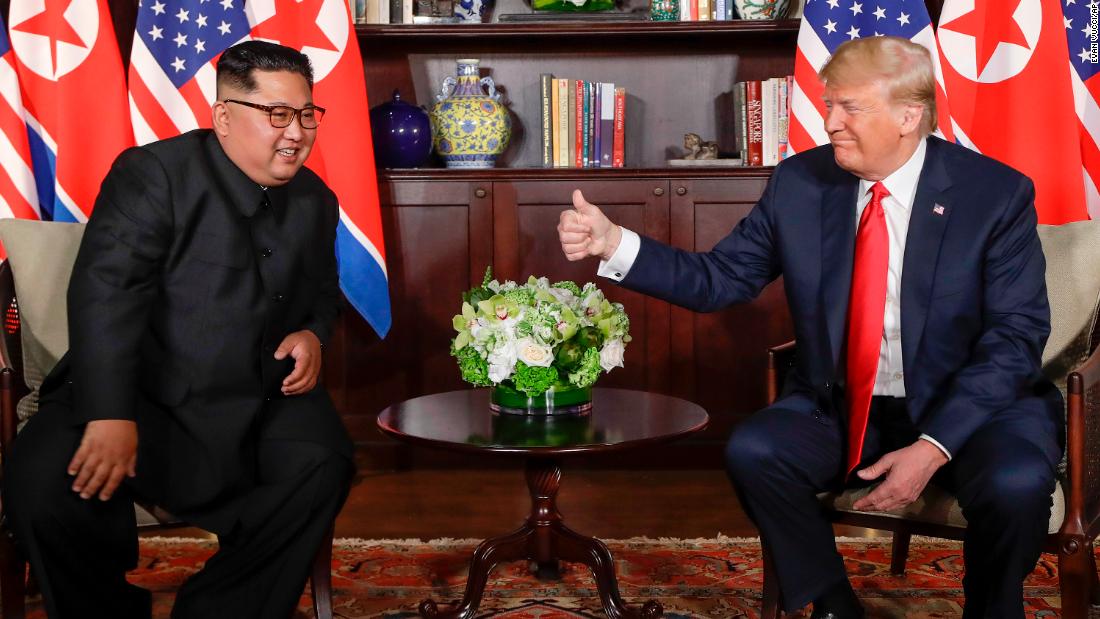 No matter what comes next in the talks between Kim Jong Un and President Trump, their handshake will remain historic, Jean H. Lee, a North Korea expert at the US-based Wilson Center, told CNN.

"I’m really thinking about how this is going to play in Pyongyang because this is such a powerful moment for the North Korean people," she said.

Lee said for the US president to fly half way around the world to meet the leader of a "very poor and very small country" lent him a huge amount of legitimacy.

"This is what (Kim) had in mind when he ramped up and accelerated the testing of his devices – to force the President to come to the negotiating table,” Lee said. “It’s stunning to watch and chilling for me to see because we are giving him exactly what he wanted.”

South Korean President Moon Jae-in said it was "a sleepless night" for him ahead of meeting between President Trump and Kim Jong Un on Tuesday.

Speaking ahead of a cabinet meeting, Moon said he hoped the summit would be a success so a "new chapter" could open.

"The NK-US summit has just begun and I believed all Koreans have their eyes fixed on Singapore," he said.

Moon is seen by many as the architect of the breakthrough in diplomacy with North Korea. Elected in 2016, he has long been an advocate of peaceful relations with Pyongyang.

Some of North Korean leader Kim Jong Un's top advisers have joined him at the table with President Trump and the US leadership.

Sitting in on the Trump summit is Vice-Chairman of the Party Central Committee Kim Yong Chol, one of Pyongyang's top go-to diplomats.

It was Kim Yong Chol who met with President Trump in early June to deliver a personal letter from Kim Jong Un, when it looked like the summit would fall through. 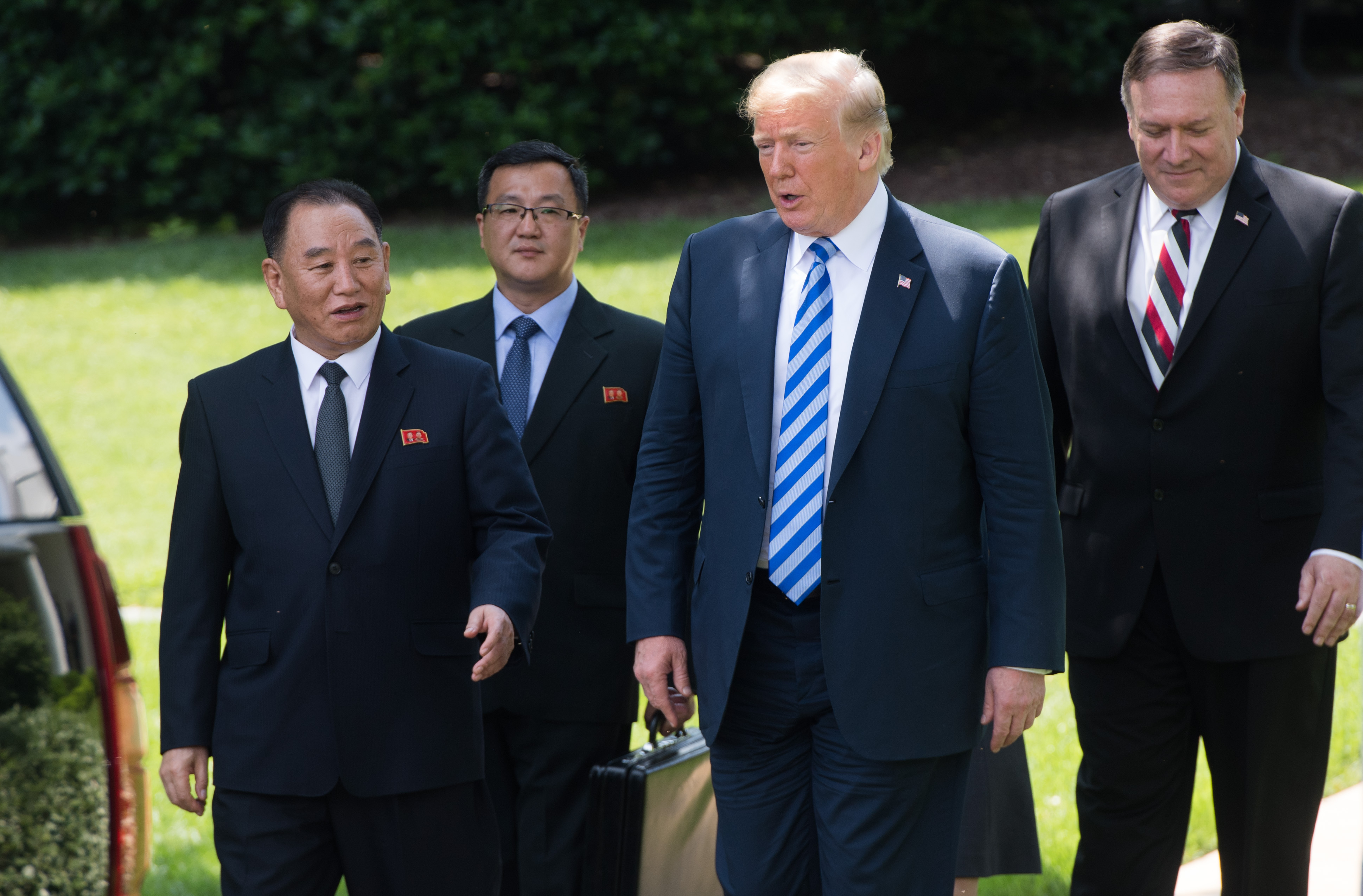 Also joining the Pyongyang delegation is Ri Yong Ho, North Korea's Foreign Minister, and Ri Su Yong, the Vice-Chairman of the Central Committee of the Worker's Party of Korea.

Nowhere to be seen is the North Korean leader's sister, Kim Yo Jong, who previously joined her brother for talks with the South Korean leadership in April.

North Korean leader Kim Jong Un did not answer when asked whether he would give up his nuclear weapons.

However, President Trump predicted he would work with Kim to resolve differences over North Korea's nuclear program.

"Working together we’ll get it taken care of," Trump said at the start of an expanded meeting. He said the two leaders "will solve a big problem, a big dilemma."

Kim and President Trump have begun their second rounds of talks, which will end with a working lunch. 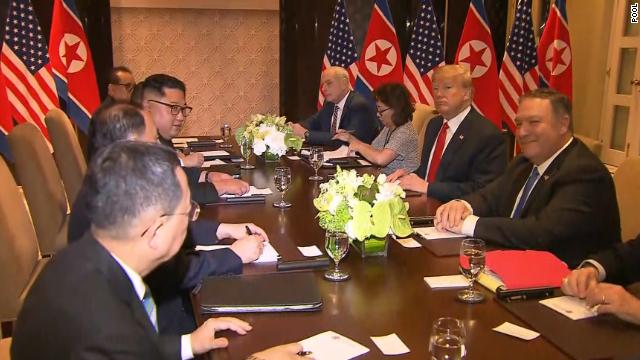 President Trump and Kim Jong Un have begun their second series of talks after their personal one-on-one meeting concluded this morning.

"We will be successful," Trump told Kim, sitting directly across from him. "And I look forward to working on it with you. It will be done." 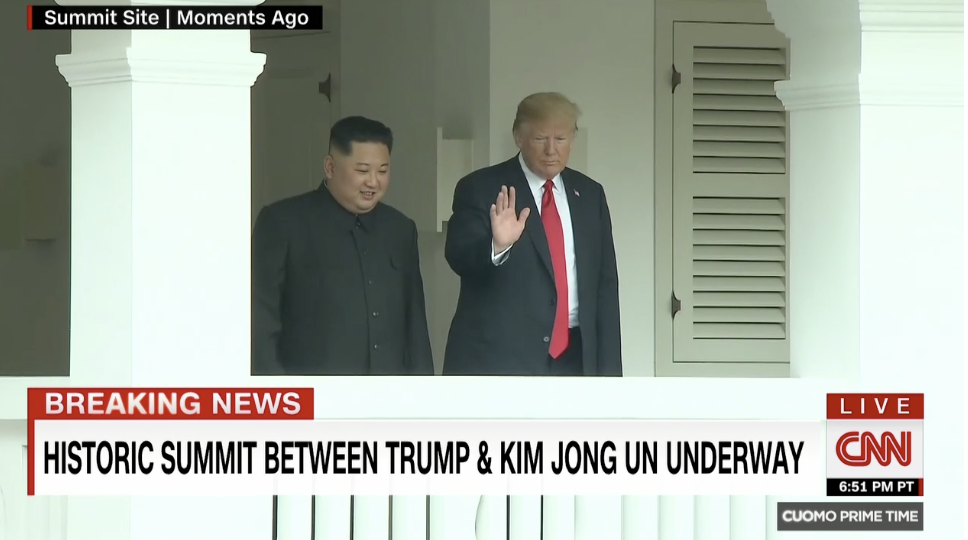 President Trump and North Korea's Kim Jong Un have stepped out of their one-on-one talks to take a walk around the Capella Hotel, where the summit is being held.

After leaving the first session of their summit, Trump told waiting reporters the meeting had been "very, very good."

"Excellent relationship," he said from the balcony of the Capella Hotel.

They were in their personal meeting for about 35 minutes, and are due to start further meetings with advisers at 10 a.m. local time (10 p.m. ET).

Kim has taken a lot of private walks with world leaders since he stepped onto the world stage earlier this year.

In April, Kim went with South Korean President Moon Jae-in for a long stroll around the demilitarized zone, which divides the two countries. 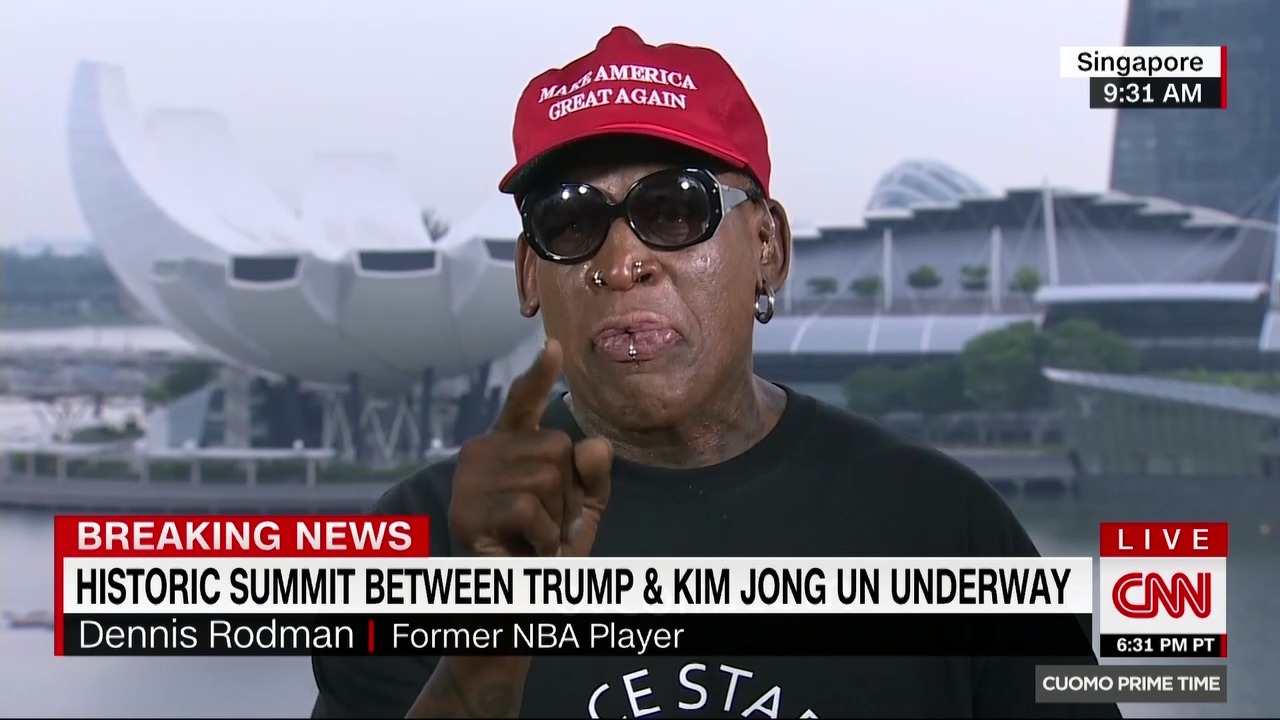 "It's a great day. I am here to see it. I'm so happy," he said. Rodman said he tried talking to former President Obama. "And Obama did not give me the time of day," he said.

President Trump and Kim held their first handshake for a dozen seconds as they exchanged a few inaudible words before a display of American and North Korean flags. It was just the beginning of a warm exchange of body language between the two men.

Trump briefly grabbed Kim's upper arm at the beginning of their handshake and then put his arm on Kim's back to guide them to their meeting room.

They then spoke briefly in a corridor before entering their meeting room and both men were smiling as they shook hands again with just two interpreters at their sides.

Trump patted Kim on the back at several points as they made their way along a colonnade to a room for their first meeting.

Trump also offered Kim a thumbs' up after Kim said "we overcame all" of the obstacles that stood in their way.