The US is just waking up, and while you were sleeping, President Trump has a busy day in Singapore.

Here's what you need to know about this historic summit he had with North Korea's Kim Jong Un.

South Korea’s government has reacted cautiously to Trump's comment in his news conference about shutting down the two countries' annual joint military drills.

The South Korean president's office said that "we need to figure out President Trump’s accurate meaning and intention (of this comment.)

"However, we believe we need to seek various measures how to efficiently move forward the dialogue, (while) serious talks are being conducted to denuclearize the Korean peninsula and to establish relations between North Korea and the US.”

At a press conference following his summit with Kim Jong Un, Trump said that the drills cost the US a lot of money.

"The war games are very expensive; we paid for a big majority of them, we fly in bombers from Guam," Trump said. "That's a long time for these big massive planes to be flying to South Korea to practice and then drop bombs all over the place and then go back to Guam. I know a lot about airplanes, it's very expensive," he said.

China says UN resolutions, including sanctions on North Korea, could be adjusted to support nuclear settlement on the Korean Peninsula.

Responding to a question about the future of sanctions following the North Korea-US summit, Chinese Foreign Ministry spokesman Geng Shuang said that the "relevant UN resolutions -- say, based on how North Korea has followed and implemented the resolutions -- can be adjusted accordingly, including suspending or lifting relevant measures.

"China always holds the view that sanctions are not the goal. Actions by the UN Security Council should support and coordinate with the current diplomatic dialogues and efforts on the denuclearization of the Korean Peninsula, and the promotion of a political settlement on the peninsula issue," he said.

Japanese Prime Minister Shinzo Abe told local media Tuesday he would like to thank President Trump for bringing up the abduction issue with North Korean Leader Kim Jong Un and wished to hear more details from Trump on the phone.

What you need to know about the abductees: Abe and his cabinet have repeatedly asked Trump to raise the abductions of their citizens by North Korea with Kim during their meeting.

For decades, Pyongyang has brazenly kidnapped Japanese, as well as South Korean, citizens and brought them back to the rogue state. Some have never been seen again.

In total, 17 Japanese citizens have officially been registered as taken by North Koreans, although many others have been reported as abductees.

It is a comparatively small number of people, but Japan takes the issue incredibly seriously. Abe has described it as a top priority. Both Trump and his Secretary of State Mike Pompeo have promised to raise it with Kim.

When asked if he believed that his North Korean counterpart would follow through on the promises he made during the two leaders' conversation, President Trump said he "really believes" he'd keep his word.

Citing a missile engine testing site that Kim Jong Un had also pledged to shut down "in addition to the other things we were able to do.

"I may be wrong and stand before you in six months and say, 'Hey I was wrong,'" before pausing.

President Trump took questions from reporters for more than an hour at a news conference in Singapore following his historic summit with North Korean leader Kim Jong Un. 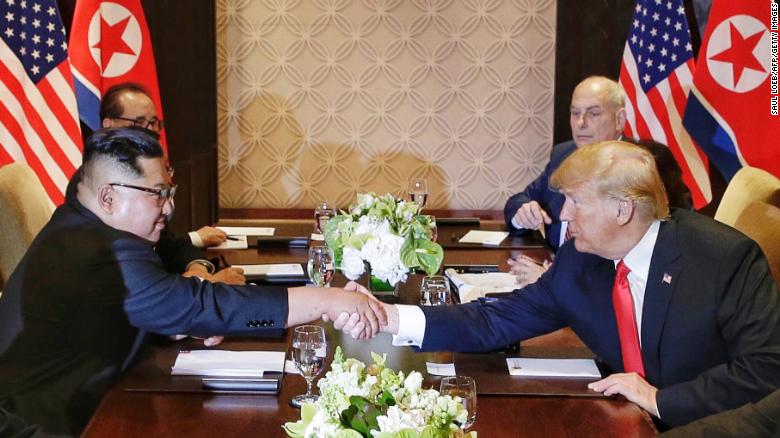 President Trump said he brought North Korean dictator Kim Jong Un to the negotiating table by showing him what the future could look like should he choose the path of peace.

Trump, the seasoned real estate executive, said he told Kim that involved beautiful beaches, great condos, and "the best hotels in the world."

"As an example, they have great beaches," he said, "You see that whenever they are exploding the cannons into the ocean. I said, 'Boy look at that view.' Wouldn't that would make a great condo? I said, 'Instead of doing that, you could have the best hotels in the world.'"

Trump said: "Think of it from the real estate perspective. South Korea and China and they own the land in the middle. How bad is that?"

Trump said Kim reviewed a video that showed all this on a iPad, and he was impressed by what he saw.

"That was a version of what could happen and what could take place," he said.

Asked about a possible second summit with North Korea's Kim Jong Un, President Donald Trump told reporters that while one hasn't been set up yet, "We'll probably need another summit or meeting."

"We're much further along than I would've thought," he said.

When asked how the North Korean regime would be able to foot the bill for denuclearization while under sanctions, Trump suggested South Korea and Japan would be able to provide the financial assistance.