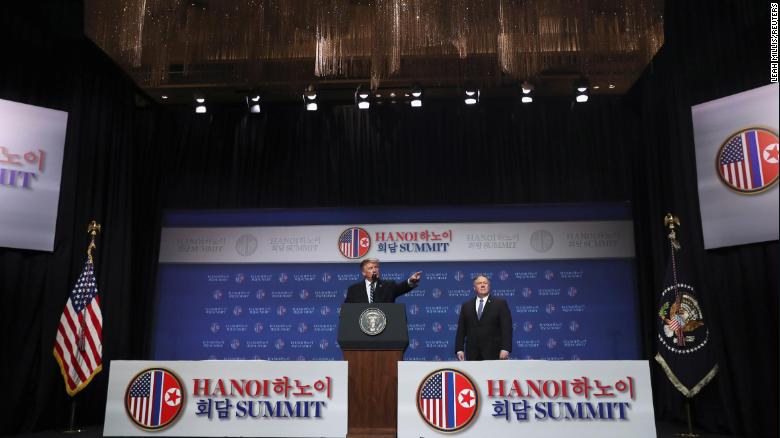 President Trump said he regretted what happened to US citizen Otto Warmbier, who was detained in North Korea for 17 months before being returned to the US in 2017, where he died days later.

Trump said he discussed the issue with Kim Jong Un, and said "I don't believe he would allow that to happen."

Watch the exchange below: 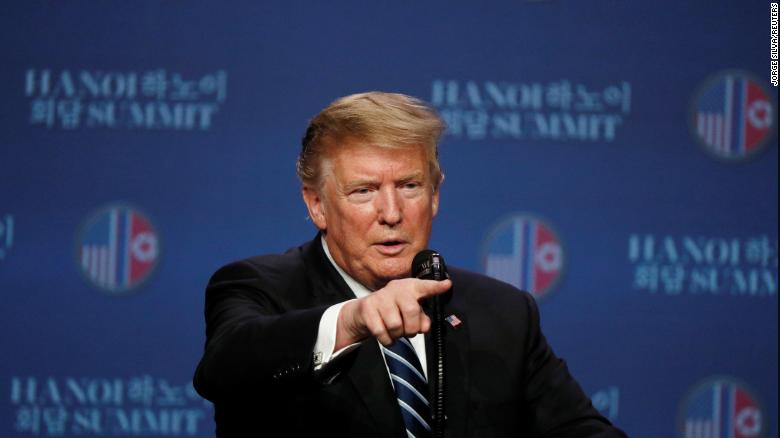 President Trump referred to his relationship with North Korea's Kim Jong Un as "very warm" and insisted that the meeting didn't end contentiously but with "a very friendly walk."

"This wasn't a walk away like you get up and walk out," Trump told reporters of the end of the summit.

"The relationship was very warm and when we walked away it was a very friendly walk," Trump said.

Trump also took digs at former presidents for not taking action on North Korea saying, "this should have been solved during many presidential runs -- and people talked about it. They never did anything."

Responding to a question about whether South Korean President Moon Jae-in had hit a "glass ceiling" when it came to pursuing peace on the Korean Peninsula, President Trump said he would speak to the South Korean leader Thursday.

"We'll be calling President Moon very soon, as soon as I get on the plane," Trump said. "He's been working very hard, he'd love to see a deal."

He added that he would also be speaking to Japanese Prime Minister Shinzo Abe.

President Trump slammed Democrats for scheduling the Michael Cohen hearing during his summit with North Korea as a "terrible thing."

"I said, 'I wonder why he didn't lie about that too like he lied about everything else,'" he said.

Trump continued: "He said no collusion and I was you know a little impressed by that frankly. He could have gone all out. He only went about 95% instead of 100 %."

Watch below: Trump says he was impressed by this in Cohen hearing

After he acknowledged that the summit in Hanoi ended with no deal due to sanctions, President Trump said he wanted to see the economic restrictions lifted on North Korean in future.

"I want to take off the sanctions so badly, because that country has got so much potential to grow," Trump said.

He has repeatedly highlighted North Korea's economic potential during the summit in Hanoi and meetings with North Korean leader Kim Jong Un. The country is currently subject to tough international sanctions, severely limiting its growth and exports. 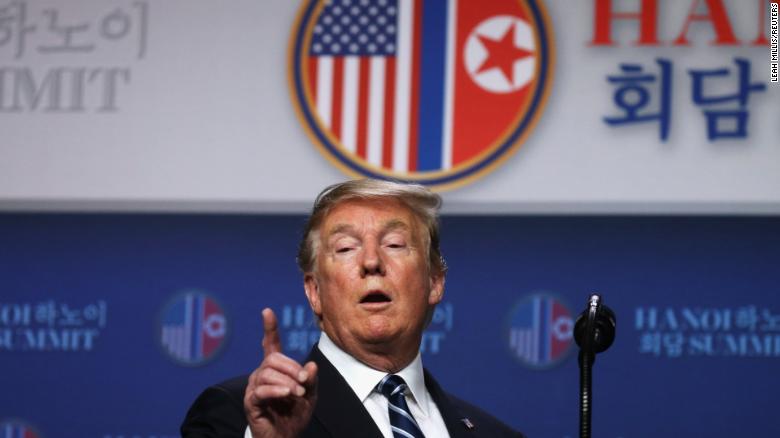 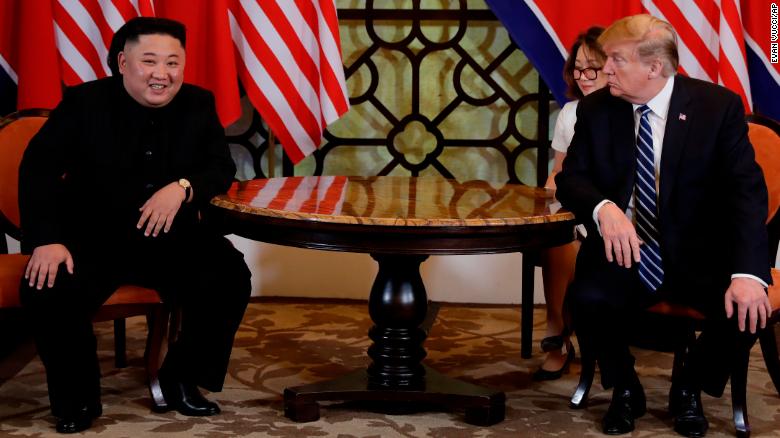 Analysts around the world are reacting to the abrupt end of President Trump and North Korean leader Kim's negotiations in Hanoi.

"It is little wonder these negotiations broke down after Trump has spent more time in office blowing up nuclear treaties than building them," said Akira Kawasaki of the International Committee to Abolish Nuclear Weapons’ International Steering Group.

"We need a real plan rooted in the international community and treaties like the Treaty on the Prohibition of Nuclear Weapons, which the Koreas could join tomorrow and begin the disarmament process with legitimacy."

Van Jackson, author of "On the Brink: Trump, Kim, and the Threat of Nuclear War," said that the US should have waited to hold the summit until progress had been made "at the Biegun level," referring to the US negotiator on the Korean Peninsula, Steve Biegun.

"This is why you don’t have leader summits disconnected from real negotiations. Even if the summit was 'successful' by the standards of the administration and its surrogates, it would’ve failed to address North Korea’s nuclear arsenal, which was never on the table in talks in recent months."

He added that "now it appears that even the very low bar that was set was not crossed."