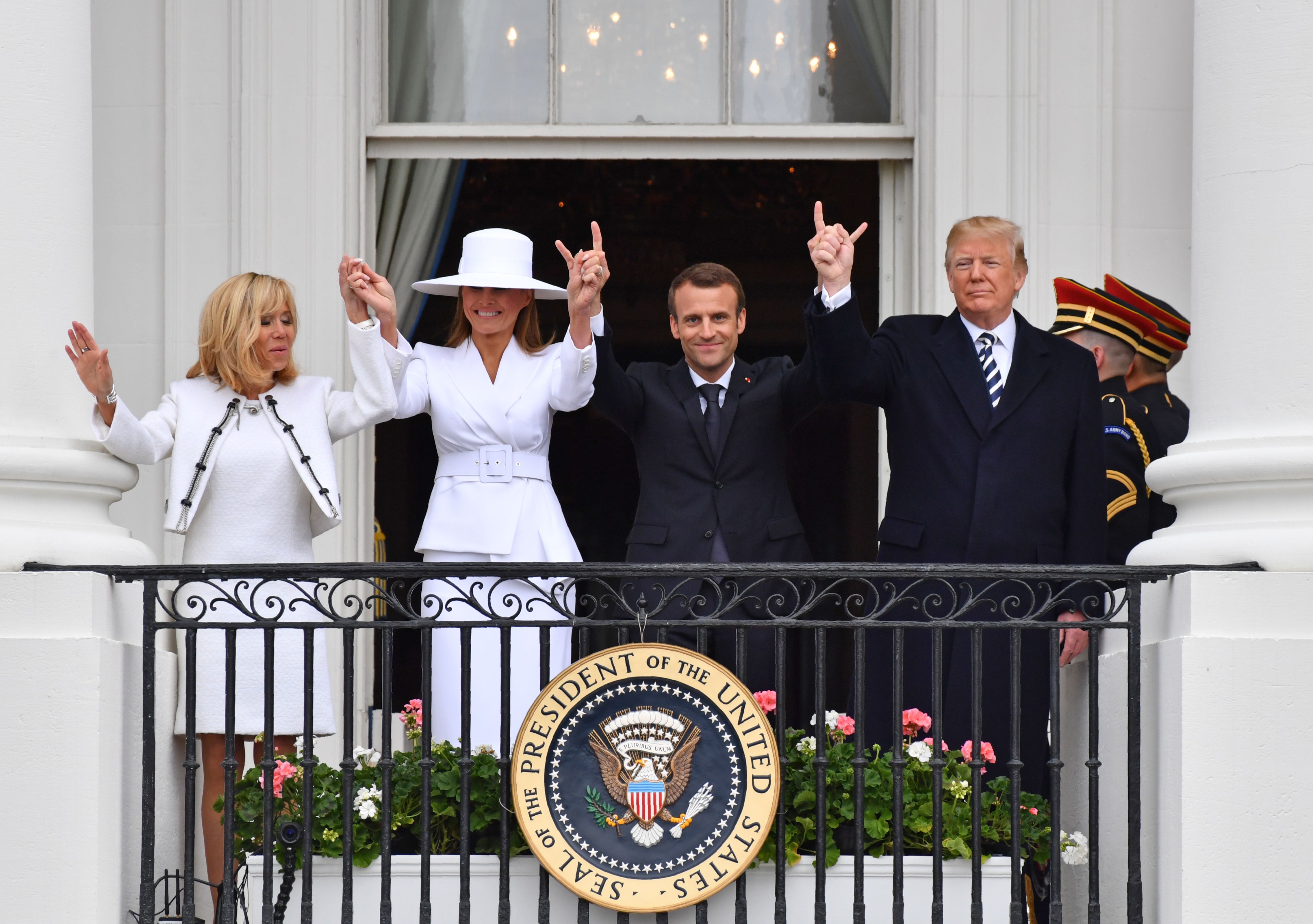 Here's what they did:

French President Emmanuel Macron has had a busy, multi-day visit with President Trump. But he's not the only European leader who will be at the White House this week.

Her visit will be very different from Macron's.

Merkel's White House trip will have will have none of of the elaborate trimmings associated with a state visit. Macron's state visit this week included a formal arrival ceremony with 500 members of the military and a state dinner with entertainment from the Washington National Opera from the Kennedy Center.

Once the favored European leader for US presidents, including Obama and President George W. Bush, Merkel got off to a frosty start with Trump and struggled to recover. The two leaders went more than five months without speaking earlier this year.

In anticipation of his visit to Washington, Macron held talks with Merkel.

French President Emmanuel Macron, speaking in front of Congress, said that one day, the US will come back to the Paris agreement, which Trump pulled out of last year.

So what's in the deal?

The Paris agreement came together in 2015. Representatives from close to 200 countries gathered in the French capital and pledged to take decisive action on climate change.

Under the accord, countries that signed on agreed reduce their carbon output and halt global warming below two degrees Celsius by the end of the century.

The deal was heralded as "the end of the era of fossil fuels" and "a victory for all of the planet" over the days that followed.

Why Trump backed out

When he announced the US would leave the agreement, Trump cast it as a humiliating defeat for American workers that unfairly advantaged foreign countries.

Trump, who has governed with an "American First" policy, said that in backing out of the agreement, he was carrying out the will of the people who voted for him.

"I was elected by the citizens of Pittsburgh," Trump said, "not Paris."

Currently, the United States and Syria are the only countries in the world not in the agreement. (Although Syria said last year that it would join onto the accord.)

French President Emmanuel Macron gave a speech before Congress this morning in which he broke with Trump on a number of key issues, including the environment and the Iran deal (more on that in the post just below this one).

Before Macron started speaking, Trump said he was looking forward to watching the address:

President Trump has not tweeted since the conclusion of Macron's speech.

President Trump and French President Emmanuel Macron had a friendly state visit this week, exchanging compliments and even shows of affection in front of reporters.

But Macron's address before Congress made clear that there are certain things he and Trump don't see eye-to-eye on:

French President Emmanuel Macron said "we must fight against fake news" — but not the kind President Trump talks about.

"We must fight against the ever-growing virus of fake news," he said.

Tackling "fake news" — hoaxes, rumors and other false claims spread on social media — has been a top issue for Macron this year. In January, he announced France will enact legislation in 2018 to combat the spread of "fake news." The legislation will be used especially during election periods, Macron said.

"Without reason, without proof, there is no real democracy, because democracy is about true choices and rational decisions," Macron told Congress today.

This is not how President Trump uses the term "fake news."

After the 2016 election, President Trump almost single-handedly turned the definition of "fake news" on its head. Among his supporters, "fake news" is now a catch-all criticism for any news that Trump doesn't like.

In January, a CNN analysis found that more than once a day, on average, Trump has publicly assailed "fake news," "fake polls," "fake media," and "fake stories."

French President Emmanuel Macron has made one thing clear this week: He and President Trump do not see eye to eye when it comes to the current Iran deal.

Trump railed against the Iran nuclear deal Tuesday, calling the agreement negotiated by the Obama administration "insane" and "ridiculous" for failing to contain Tehran.

However, France is staying in the deal -- "because we signed it," Macron said.

"We should not abandon it if we don't have something more substantial instead. That is my position," Macron told Congress moments ago.

"Your President and your country ... will have to take its own responsibilities regarding this issue," he added.

Both leaders have said they are willing to negotiate on the Iran deal, something Macron made clear in his speech.

French President Emmanuel Macron, speaking in front of Congress, stressed the importance of protecting the environment, insisting that one day, the US will come back to the Paris agreement.

"I am sure one day, the US will come back and join the Paris agreement," Macron said.

"I believe in building a planet for our children that is still inhabitable in 25 years," he said. "Some people think that securing industries and current jobs is more important than climate change ... I hear this concern, but we must find a smooth transition."

He later added that he was "sure" that the US would one day rejoin the Paris climate agreement.

This is a major break from President Trump, who pulled the United States out of the historic Paris climate agreement.

Currently, the United States and Syria are the only countries in the world not in the agreement. 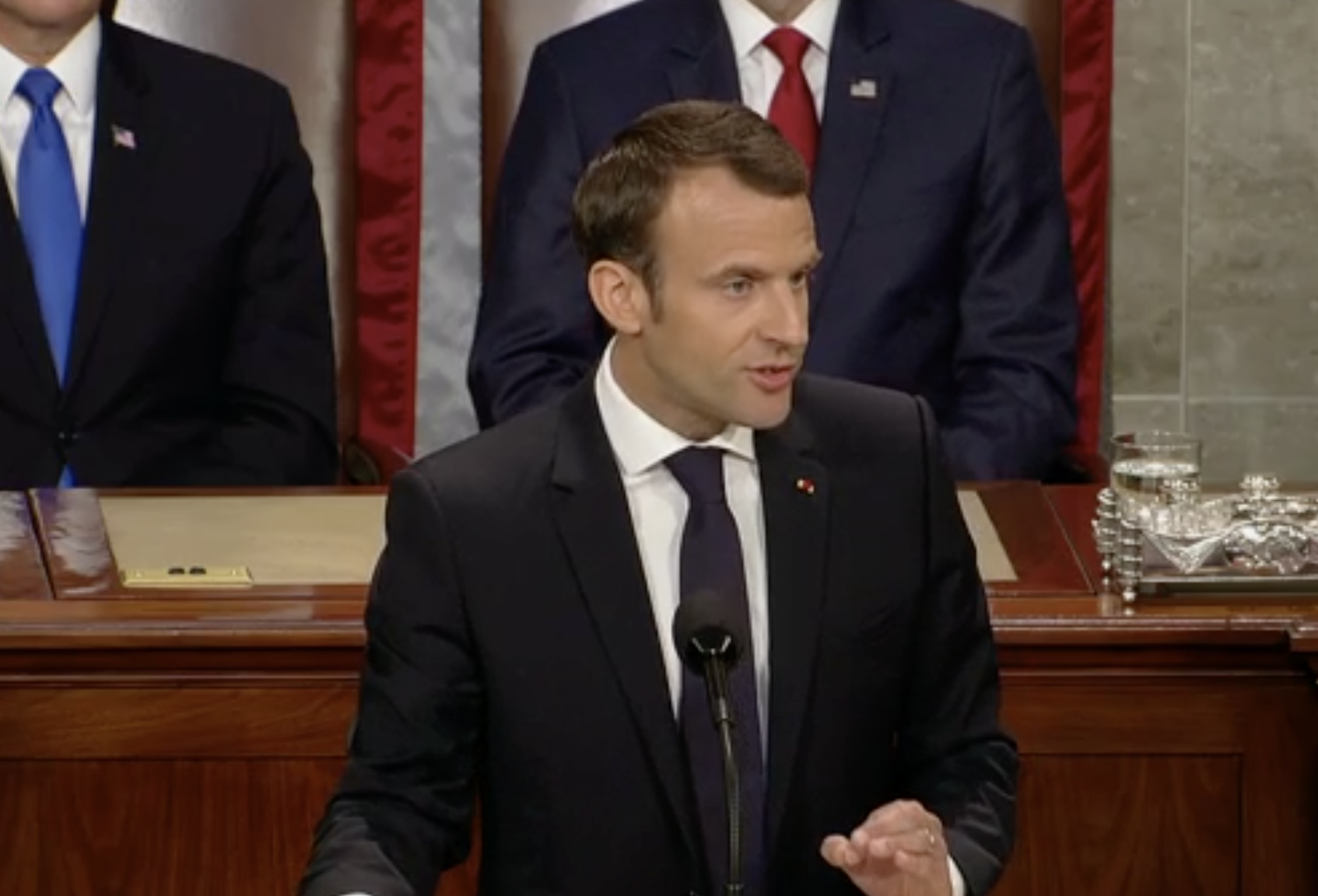 French President Emmanuel Macron is addressing a joint session of Congress right now. He began his speech by talking about France's shared history with the US.

“France has participated with heart in hand in the story of this great nation for the very beginning," he said. "Our two nations are rooted in the same soil”

He stressed the importance of the relationship between the United States and France, a relationship forged over the last 100 years.

"We have shared the history of civil rights," Macron said. "Thousands of examples come to mind. One would think of the exchanges between our cultures across the centuries."