US President Donald Trump and first lady Melania Trump will not visit the Aisne-Marne American Cemetery and Memorial on Saturday afternoon, as planned, because of poor weather.

A White House statement said the planned visit had been "canceled due to scheduling and logistical difficulties caused by the weather. An American delegation led by Chief of Staff General John Kelly and Chairman of the Joint Chiefs of Staff General Joe Dunford will attend on their behalf.”

Trump was originally scheduled to take Marine 1 to the memorial site, situated 50 miles outside Paris. But gray skies and drizzle forced the trip to be called off.

The cemetery contains the graves of nearly 2,300 war dead, many of whom fought in the area in the summer of 1918.

The late change of plans leaves Trump's afternoon in Paris largely empty before he attends a dinner for leaders at the Musée d'Orsay.

The wife of the French President, Brigitte Macron, greeted her American counterpart Melania Trump with warmth at the Elysee Palace in Paris.

The pair, somberly dressed, exchanged a few words and a kiss on each cheek before entering the French presidential residence together.

They were expected to join their husbands, Presidents Emmanuel Macron and Donald Trump, for lunch following the leaders' bilateral talks.

The US President and Melania Trump are in Paris for the weekend for events to commemorate the centenary of the Armistice that ended World War I.

Trump tweeted Saturday: "Is there anything better to celebrate than the end of a war, in particular that one, which was one of the bloodiest and worst of all time?"

During his trip, Trump will visit two burial grounds near Paris set aside for some of the roughly 117,000 American military personnel who died in World War I.

On Sunday -- Veterans Day in the United States -- he'll deliver remarks from Suresnes, the American cemetery perched on the side of Mont Valérien with a view of the Paris skyline.

Speaking as they met for bilateral talks in Paris, President Donald Trump said he and his French counterpart Emmanuel Macron were "very much similar in our views, and I appreciate what you're saying about burden sharing."

Trump's words came hours after he picked a fight with Macron over European defense, describing comments the French President made on the subject as "very insulting" in a tweet posted as he landed Friday.

"You know what my attitude's been, and we want a strong Europe. It's very important to us to have a strong Europe. And whichever way we can do it the best and most efficient would be something we both want," Trump said Saturday.

Trump's tweet on Friday continued his oft-repeated misunderstanding of the way NATO works. Trump has consistently complained that NATO members don't adequately contribute to the shared defense agreement, suggesting the other 28 members somehow owe the US money.

Actually, all alliance members commit to spending 2% of their GDP on defense. While few have reached that threshold, most members have increased spending in recent years and are nearing the suggested level of spending.

US President Donald Trump was greeted by French President Emmanuel Macron as he arrived at the Elysee Palace in Paris on a rainy Saturday morning.

The pair exchanged a brief handshake and each gave two "thumbs-up" to the assembled press before walking together up the steps to the presidential palace.

The pair seemed to gloss over whatever differences they may have on European military cooperation, saying as they sat down for talks that they were aligned on military burden sharing.

“We’re getting along from the standpoint of fairness,” Trump said in televised remarks. “He understands the United States can only do so much.”

Macron said his “proposals for European defense are consistent” with Trump’s views of burden sharing.

Trump hailed his ties with Macron, saying: “We have become very good friends.

“We have much in common,” Trump added.

Trump is on a weekend visit to Paris to mark the centenary of the end of World War I.

US President Donald Trump and his French counterpart Emmanuel Macron will hold bilateral talks Saturday at the Elysee Palace in Paris, as Europe watches warily for clues to Trump's foreign policy intentions.

They are the only formal talks scheduled for the US President during his weekend visit to France to commemorate 100 years since the end of World War I.

The United States and France have traditionally been close allies. But while both Trump and Macron appeared to get off to a warm start following Trump's inauguration, their relationship seems to have soured somewhat since.

US officials said the civil war in Syria and attempts to counter Iran would sit high on the agenda.

When the talks wrap up, the two Presidents will be joined by their respective first ladies, Melania Trump and Brigitte Macron, for lunch at the presidential palace.

The Trumps will then visit Aisne-Marne American Cemetery, at the foot of Belleau Wood. The cemetery contains the graves of nearly 2,300 war dead, many of whom fought in the area in the summer of 1918.

The US President and first lady will rejoin their hosts for dinner at the Musee d'Orsay, an internationally renowned museum on the banks of the River Seine, in the evening.

US President Donald Trump picked a fight with French President Emmanuel Macron over European defense just as Air Force One landed in France late Friday for events to commemorate the centenary of the end of World War I.

Speaking Tuesday on Europe 1 radio, Macron called for a "real European army" within the European Union, according to AFP.

"We have to protect ourselves with respect to China, Russia and even the United States of America," Macron said.

A senior French official said Friday night that Trump took Macron's words out "out of context."

According to the official, Macron will likely want to respond to Trump's tweet directly himself, and likely Saturday.

The official, though, clarified the language Macron used, saying that the French leader did not mean he wanted a European army but better coordination and funding of Europe's already-existing resources. 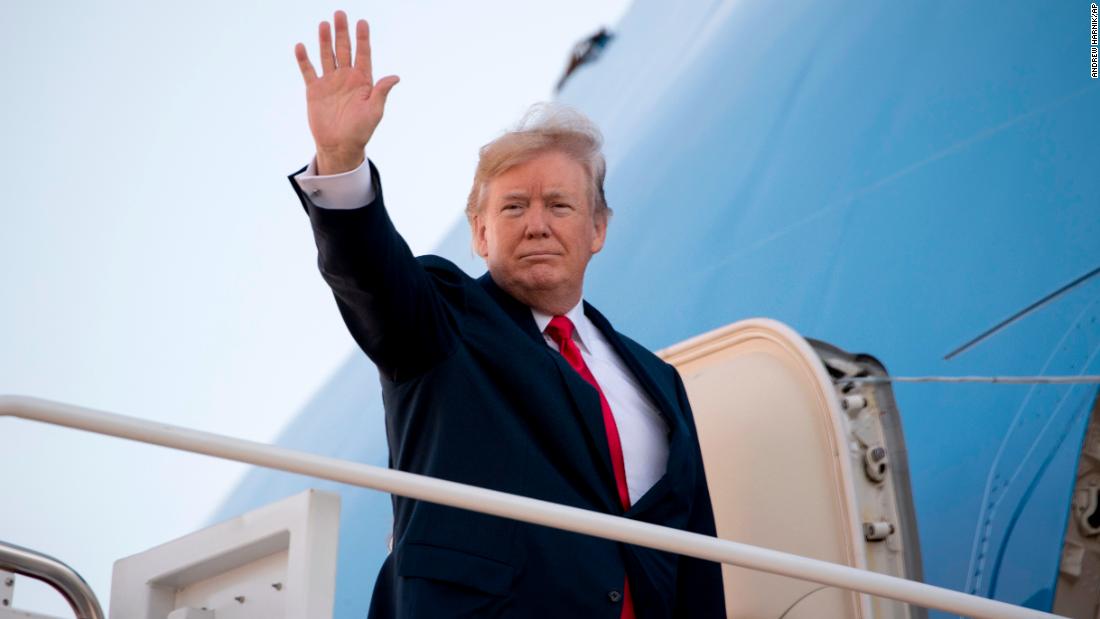 President Trump departs Friday morning for Paris for a series of events to mark the commemoration of the 100th anniversary of the WWI armistice.

The trip comes following a wild week of news -- two mass shootings, a midterm drubbing that saw Democrats make massive gains in the House, and the forced resignation of his embattled attorney general -- and President Trump will try and use the world stage to reset his agenda while bolstering his presidential standing with two days of largely ceremonial events.

His only bilateral meeting is with French President Emmanuel Macron on Saturday, where issues like Syria, Iran, and trade could come up. The two men are close, but remain apart on issues like Iran and trade.

Initially expected to meet with Russian President Vladimir Putin, those talks could now come now at the G20 later this month in Argentina. But he's still likely to encounter Putin, along with leaders like British Prime Minister Theresa May and German Chancellor Angela Merkel, during the centenary ceremony at the Arc de Triomphe on Sunday.

Trump's main speech will also come on Sunday, which will also act as his traditional Veterans' Day address. He'll deliver it at the Suresnes American Cemetery outside Paris, which was set aside for fallen US soldiers.

The Paris trip was announced as a replacement for the military parade he commissioned, which was deemed too expensive.