President Trump erupted this morning when he heard Nancy Pelosi accuse him of engaging in a cover up, according to a source familiar with his reaction.

Though he lashed out at the investigations overall in the Rose Garden, this person says he was the angriest about her remark.

Officials insist that if she had not said that, the infrastructure meeting would have gone on as scheduled.

"Bottom line: if Nancy Pelosi had not come out this morning and said what she said about "cover up," they would still be in there right now meeting on infrastructure," one senior White House official argued.

The official said "all was on track" until Pelosi made those comments this morning, setting Trump off.

Officials then scrambled to set up a Rose Garden event for Trump to address the media after his brief meeting with Democrats, as Kevin reported.

“You know I think what they want me to do is say, ‘Well what we'll do is raise taxes,’ and we'll do this and this and this, and then they'll have a news conference, see, Trump wants to raise taxes,” Trump said.

What Pelosi said: Pelosi on Monday night said the committees were on course to be successful and Democrats' message must be "No one is above the law," and that they are witnessing "the cover-up." The California Democrat also said they all agreed they needed to get to the truth, but that the public believes kitchen table issues must also be dealt with.

To give a sense of the atmospherics around President Trump's White House and its relationship with Congress and the Department of Justice, here are some of developments this week regarding the various investigations: 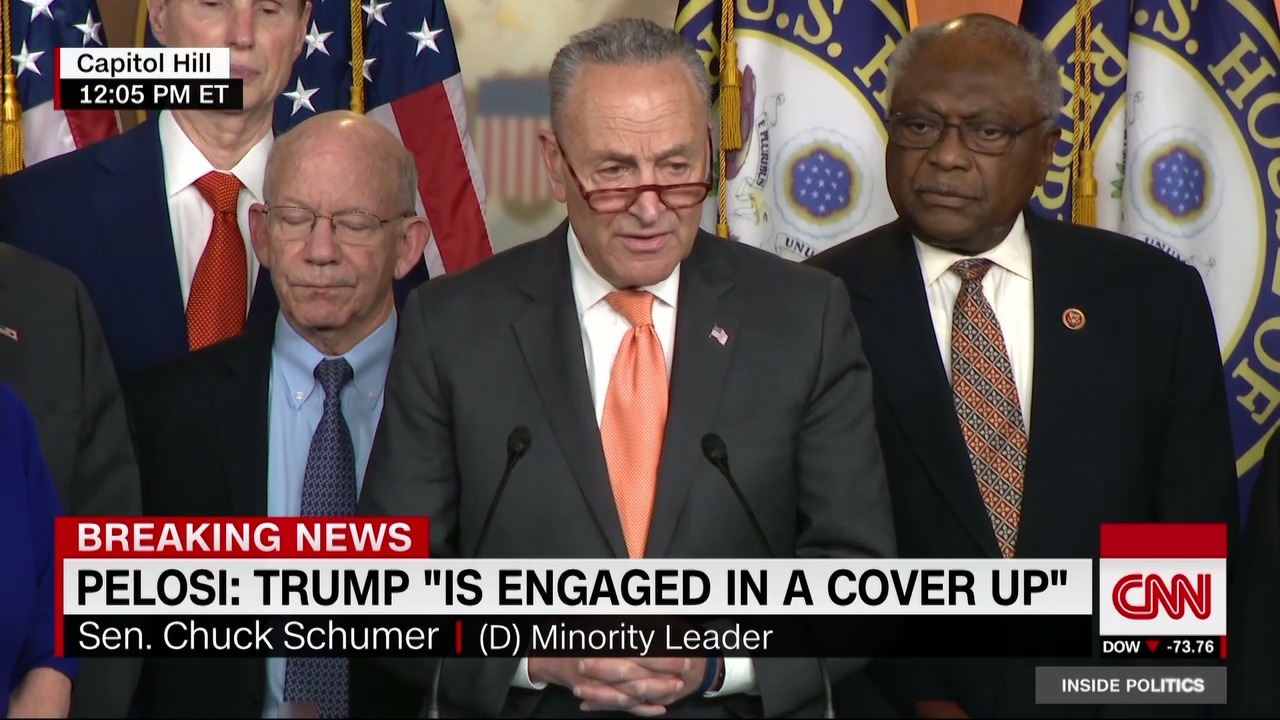 "But now that he was forced to actually say how he would pay for it, he had to run away," Schumer said.

Here's how he described Democrats' 5-minute meeting with the President this morning:

And he came up with this preplanned excuse. And one final point — it's clear that this was not a spontaneous move on the President's part. It was planned. When we got in the room, the curtains were closed. The President — there was a place for him at the front so he could stand and attempt to tell us why he wouldn't do infrastructure. And, of course, then he went to the Rose Garden with prepared signs that had been printed up long before our meeting.

Schumer added: "We are interested in doing infrastructure. It's clear the President isn't."

White House officials began planning earlier this morning for the Rose Garden event in which the President announced he couldn't work with Democrats as they proceed with their investigations.

Aides printed the podium poster and created handouts after Speaker Pelosi made her comment about Trump engaging in a "cover-up" -- but did not disinvite Pelosi or Sen. Schumer from their planned meeting on infrastructure.

Trump wanted to inform the Democrats of his move in person, according to an aide, leading to the 5-minute meeting in the Cabinet Room. 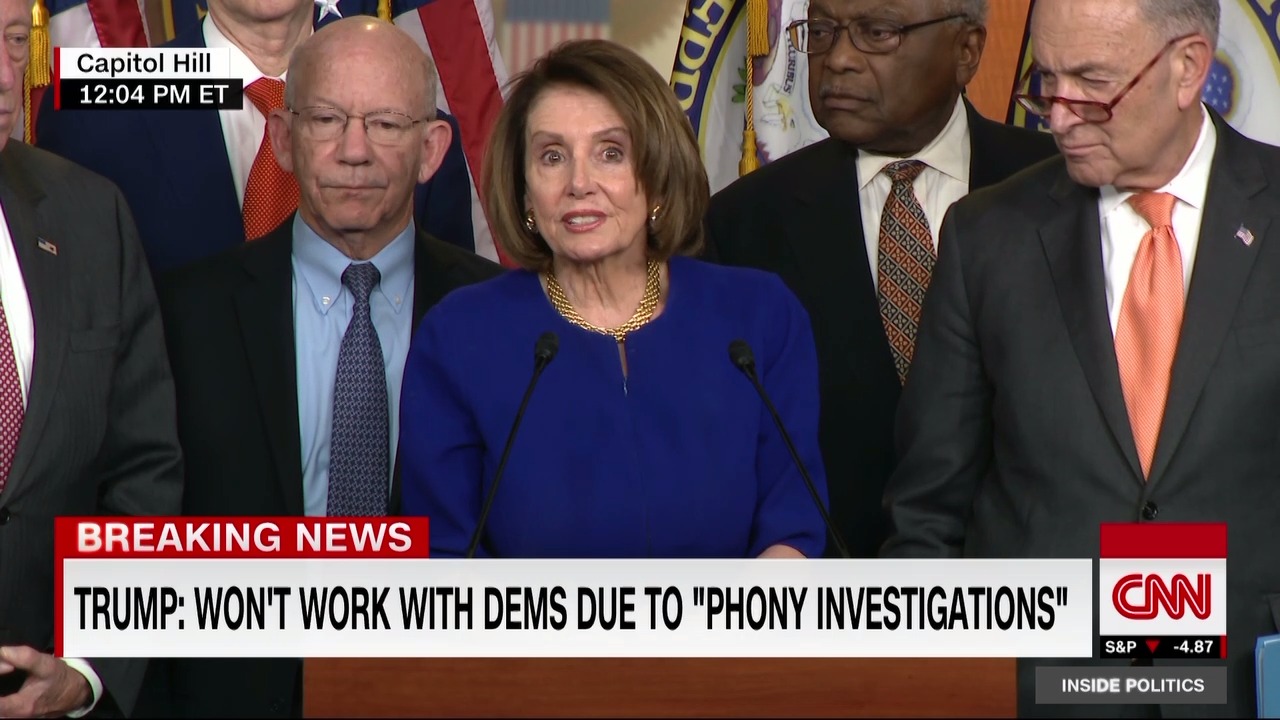 Speaker of the House Nancy Pelsoi said that after long promising to work on infrastructure, President Trump "took a pass."

Some context: Pelosi and Trump were supposed to meet this morning to talk about infrastructure alongside Senate Democratic leader Chuck Schumer. That meeting lasted only five minutes and ended after Trump said he could not work with Democrats amid investigations.

Here's how Schumer described the meeting:

"To watch what happened in the White House would make your jaw drop." 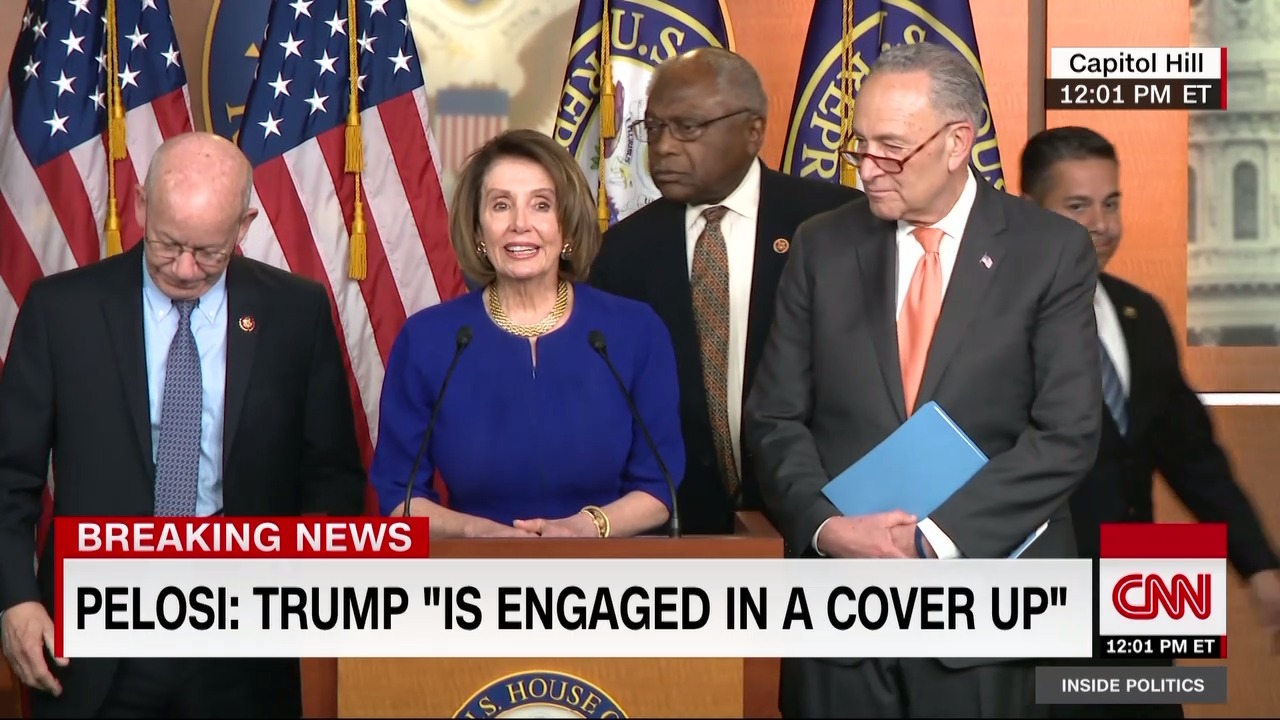 Speaker of the House Nancy Pelosi and Senate Democratic leader Chuck Schumer are holding a press conference right now, moments after President Trump convened the media in the Rose Garden to slam Democrats.

She began by talking about infrastructure.

The two leaders met with President Trump about infrastructure. That meeting lasted only five minutes, a source a direct knowledge told CNN.

President Trump just spoke in the White House Rose Garden to address the "cover-up" comments Speaker of the House Nancy Pelosi made earlier this morning.

Trump spoke from a presidential lectern with a posted tacked to the front that outlined the numbers behind the Mueller report.

Right as they walked in, Trump brought up the "cover-up" comment Pelosi made earlier this morning. Then, Trump said there would be no negotiations until the investigations are over.

Pelosi told him she knew he wasn’t serious about infrastructure.

President Trump says he told Democratic leaders at the White House on Wednesday he couldn't work with them while they were pursuing investigations into him and his administration.

Trump was supposed to have a meeting with Senate minority leader Chuck Schumer and House Speaker Nancy Pelosi this morning on infrastructure. That meeting lasted just a few minutes: During it, Trump told them he couldn't work with them until their investigations are over.

"I walked into the room and I told Sen. Schumer, Speaker Pelosi, I want to do infrastructure," he said. "But you can’t do it under these circumstances."

He said he message to the lawmakers was "get these phony investigations over with."