Earlier: President Trump was in Springfield, Missouri, where he held a Make America Great Again Rally -- the second in two days.

The subtext: After days of uncharacteristic silence, President Trump finally let loose on Twitter and attacked the woman who has accused his Supreme Court nominee of sexual assault. Meanwhile, the New York Times reported his deputy attorney general once discussed wearing a wire during their conversations -- and floated the possibility of removing him from office through the 25th Amendment. 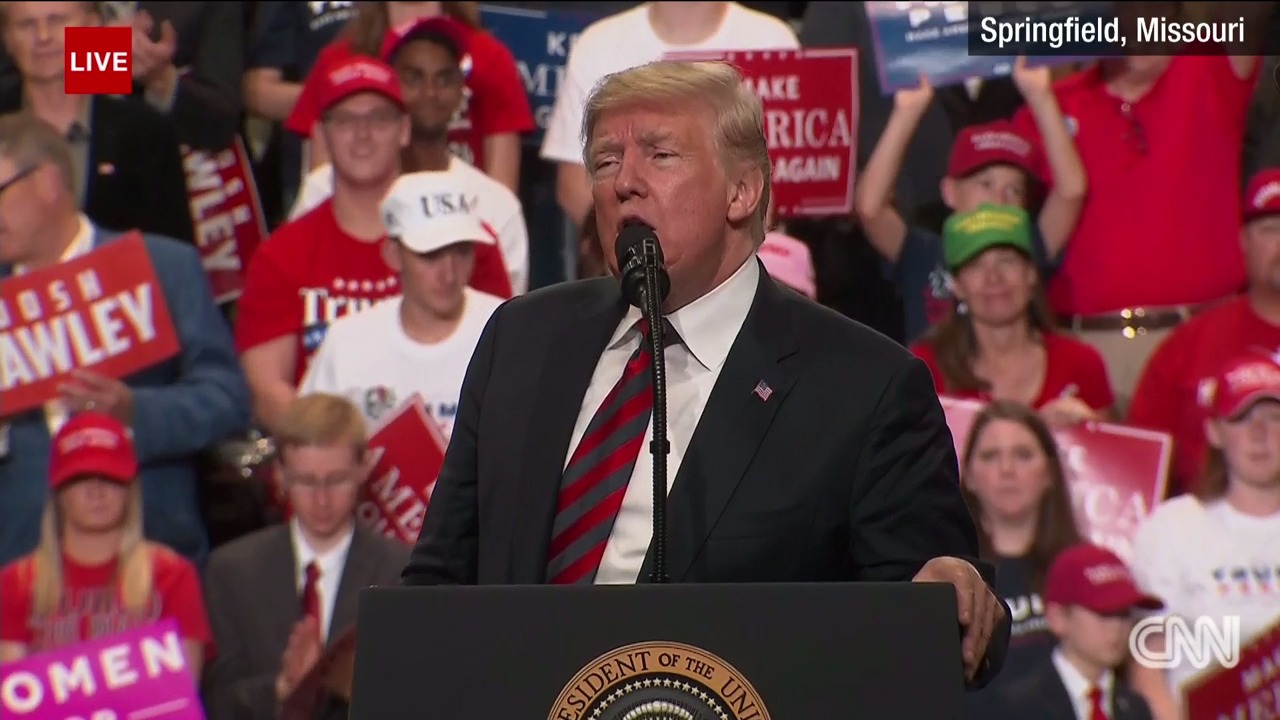 Ahead of a speech on Iran at the United Nations next week, President Donald Trump hit the “crummy Iran deal” and suggested that the nation simply “wants to survive.”

“Look at what happened to Iran,” he said, noting that there are “riots in every city” since the US pulled out of the deal.

“Everybody said Iran will take over, now Iran wants to survive, ok? They’re no longer looking at the Mediterranean, ok? And hopefully, we’ll be able to do something with Iran, but you know what, if it happens, good, if it doesn’t that’s okay… but they’re not doing so well folks,” he said.

He continued, “You know what, I hope we get along with them great. It’s not easy for them, and frankly, it’s not easy for others, until we get treated with the respect that we deserve.”

As the trade war continues, President Donald Trump projected strength as he addressed tariffs on China here in Springfield, Missouri, saying the US has “far more bullets” and warning that more tariffs on China could come.

“China last year took out $500 billion from our country, 500 billion… We have rebuilt China, we have given them such wealth and we’re changing it,” he told the rally-goers.

“So we charged 25% on $50 billion worth of merchandise tariffs coming in. And then they said, well we’re going to do the same thing, I said that’s okay. We have far more bullets, we’re going to go $200 billion and 25% Chinese made goods. And we will come back with more. If they retaliate, we have a lot more to come back with. And they want to make a deal, and let’s see if we can make a deal.”

President Trump said on Friday that Republicans had to fight for Supreme Court nominee Brett Kavanaugh, and that women will back that approach.

"We have to fight for him. Not worried about the other side," Trump said in Missouri. "And by the way, women are for that more than anyone would understand."

President Trump, in an apparent veiled reference to the Deputy Attorney General Rod Rosenstein story, told a rally of the FBI and the Justice Department, “there’s a lingering stench and we’re going to get rid of that, too.” 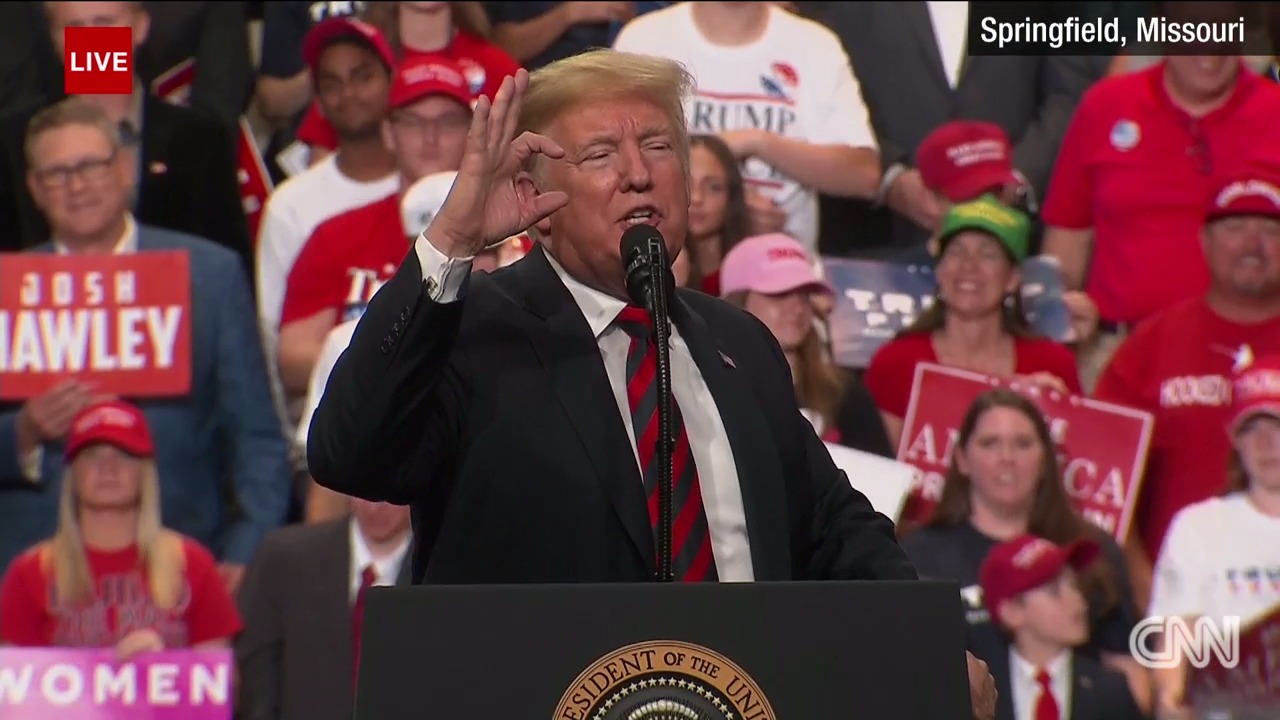 President Trump mocked members of the "Antifa" tonight for living in their parents basements and having tiny biceps, showing their approximate size -- in his telling -- by pinching his thumb and pointer finger together.

He added, "I would never suggest this, but I’ll tell you — they’re so lucky that we’re peaceful."

Antifa is short for anti-fascists: The term is used to define a broad group of people whose political beliefs lean toward the left -- often the far left -- but do not conform with the Democratic Party platform. The group doesn't have an official leader or headquarters, although groups in certain states hold regular meetings.

Antifa positions can be hard to define, but many members support oppressed populations and protest the amassing of wealth by corporations and elites. Some employ radical or militant tactics to get their message across. 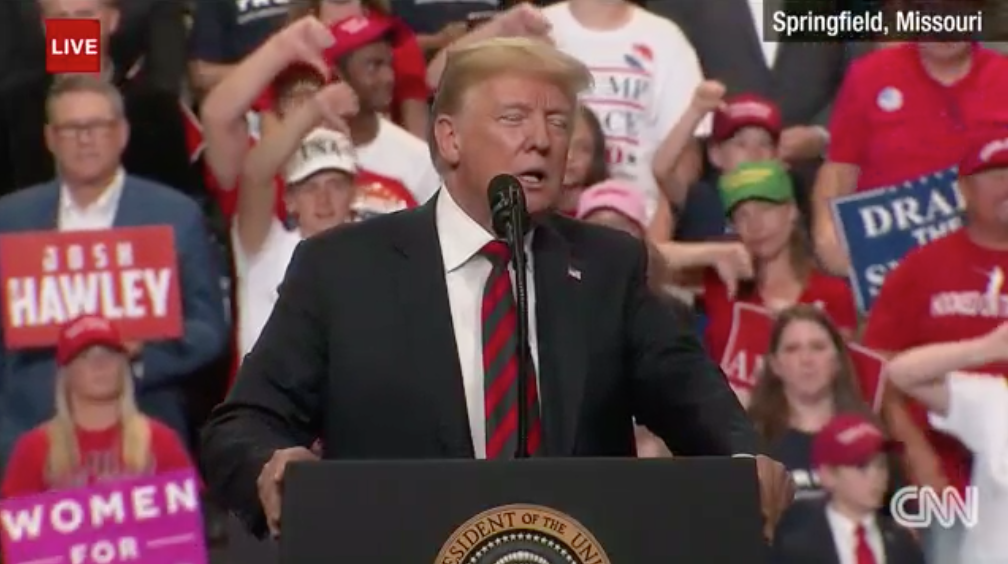 As Christine Blasey Ford decides whether to testify hours before the deadline, President Donald Trump touted his Supreme Court nominee, who he described as “central casting.”

During a lengthy diatribe against Missouri Sen. Claire McCaskill, Trump noted that the Democrat announced she would not vote for him.

Brett Kavanaugh, he said, is a “fantastic man.”

He suggested Kavanaugh’s confirmation will happen.

McCaskill, he said, will “vote against everything we want.”

He added, “Claire McCaskill will never ever vote our way because she loves the swamp… There’s a lingering stench and we’re going to get rid of that too.”

As he continued to rail against the Missouri Democrat, he cited her RV tour while she was “actually flying in her luxurious private plane” and her vote against tax cuts.

And when referencing her vote on healthcare, he brought up John McCain – without naming him.

“We lost a certain vote but we lost all of the Democrats,” he said.

McCaskill represents “radical Democrats trying to take over,” he said. 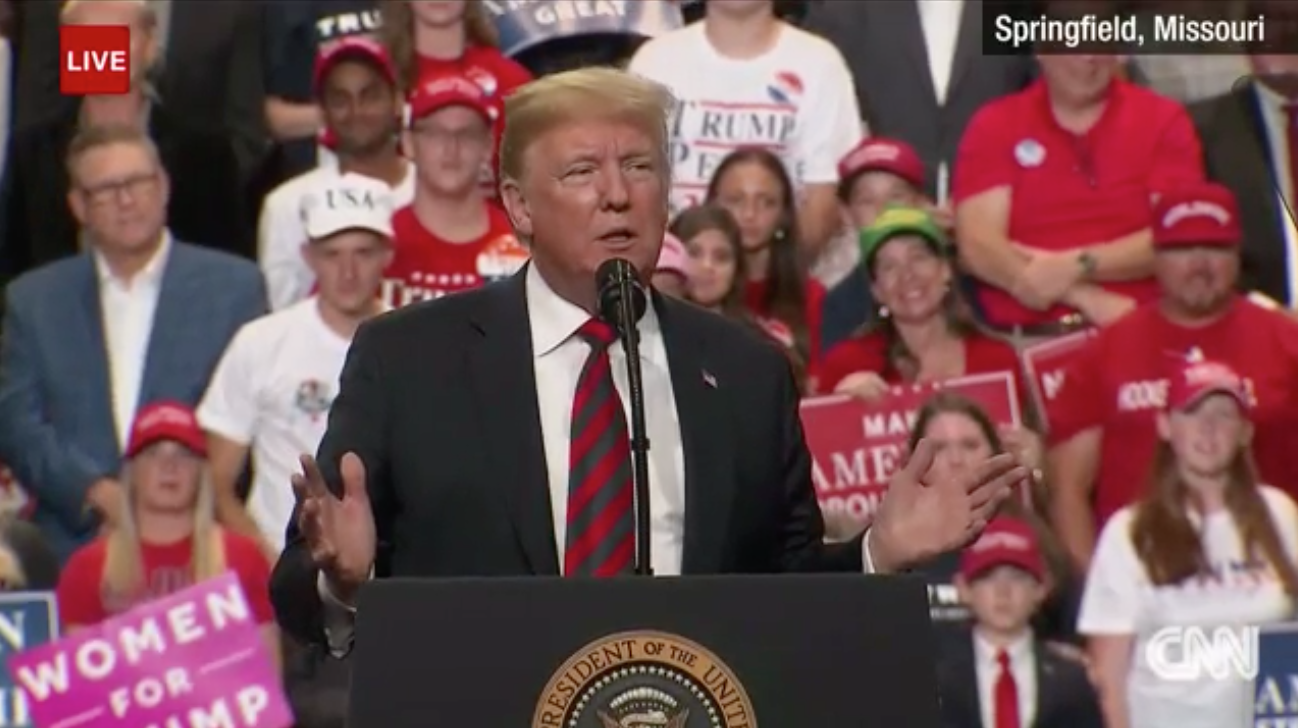 President Donald Trump turned his attention to the media at his Friday night rally in Springfield, Missouri.

He suggested that in 2020, he will get endorsements from all the major news organizations, name-checking the New York Times, Washington Post, ABC, NBC, and CBS.

"We expect endorsements from everybody," he said.

His reason? "Without us, they have nobody watching television. Nobody." 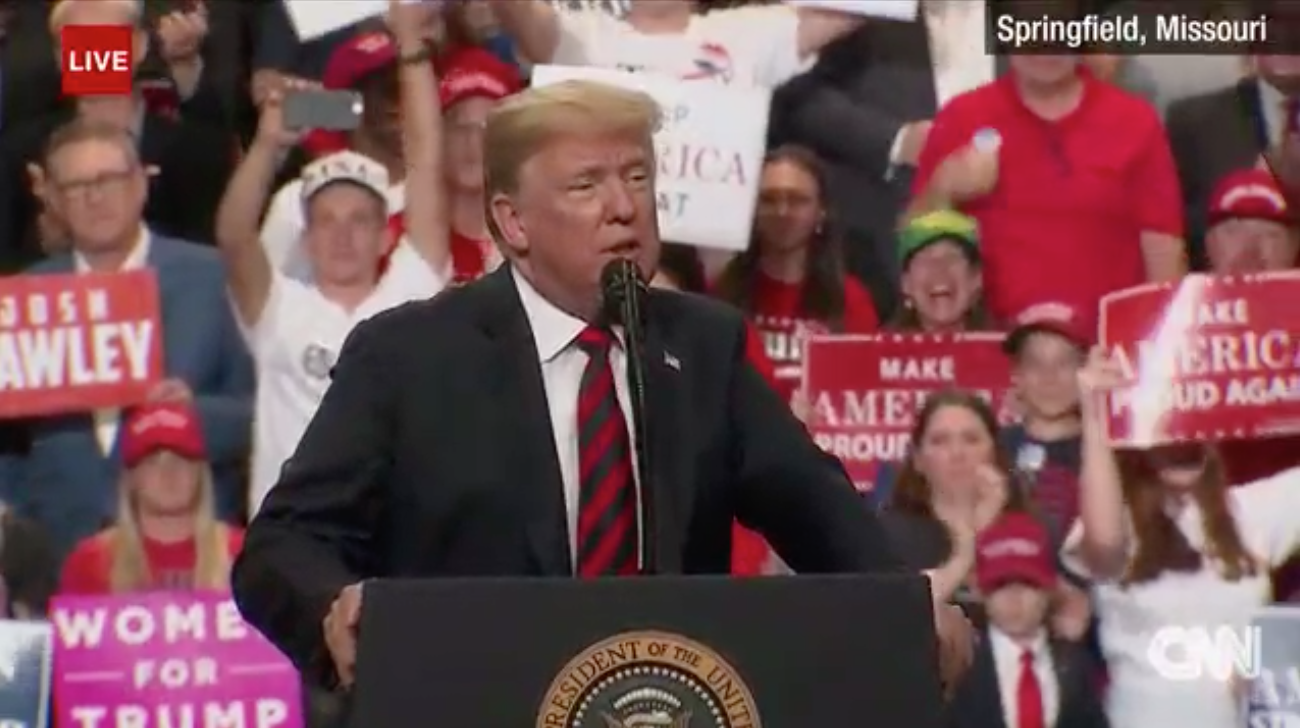 President Trump is speaking in Springfield, Missouri, at a Make America Great Again rally. Watch it live in the video player above.

He kicked it off by talking about the economy -- "the best economy in our history" -- and hailed the stock market's "all-time high."