Trump campaign manager Brad Parscale tweeted on Monday that the campaign plans to check the temperature of everyone who enters the venue for tonight's rally.

They will also be providing hand sanitizer, and each attendee will receive a mask provided by the campaign. Attendees, however, will not be required to wear the masks.

In an interview with Axios Friday, President Trump said he would not wear a mask at the rally: “Not as a protest but I don't feel that I'm in danger."

Trump also told Axios that he wants rally attendees to “make their own decisions” about wearing a face mask. He didn’t encourage or discourage people to wear them, and called masks "a double-edged sword."

"I recommend people do what they want," the President said.

He told Axios, “there was a time when people thought it was worse wearing a mask,” adding, "I let people make up their own decision."

Dr. Bruce Dart, executive director of the Tulsa Health Department, told CNN’s Don Lemon Friday that he is concerned about the impact Trump’s rally will have on Tulsa and on the rest of the country during this Covid-19 pandemic.

He thinks the President and his followers should wear a mask at the rally.

“We have such little tools to keep people safe, we have no vaccine, we have no clinical therapies. One of the few tools we have is social distancing and a mask to break the chain of transmission of the virus,” Dart said.

CNN reported that rallygoers RSVP'd to gain admission to the event and by registering, they had to agree to a disclaimer that states they acknowledge the "inherent risk of exposure to COVID-19 exists in any public place where people are present."

The Trump campaign confirmed six staffers working on the Tulsa rally have tested positive for coronavirus.

“Per safety protocols, campaign staff are tested for Covid-19 before events. Six members of the advance team tested positive out of hundreds of tests performed, and quarantine procedures were immediately implemented," Tim Murtaugh, campaign communications director, said in a statement.

Murtaugh said that none of the staffers who tested positive "or anyone in immediate contact will be at today’s rally or near attendees and elected officials."

"As previously announced, all rally attendees are given temperature checks before going through security, at which point they are given wristbands, facemasks and hand sanitizer,” Murtaugh added.

NBC was the first to report on the positive tests.

A sign at the entrance to Trump's rally in the Bank of Oklahoma Center arena in Tulsa warns rally-goers: “DO NOT ENTER IF YOU ARE SICK OR EXPERIENCING ANY SYMPTOMS OF COVID-19”

The sign also warns that there is “an inherent risk of exposure to COVID-19 exists in any public place where people are present. By entering this rally, you certify that you are not experiencing symptoms of COVID-19, voluntarily assume all risks related to exposure to COVID-19…”

The sign says that by entering, rallygoers agree to hold multiple entities harmless.

CNN's Ryan Nobles also noted that inside the venue there are signs that encourage social distancing.

Remember: The Trump campaign said that it takes "safety seriously," and noted hand sanitizer, temperature checks and masks will be provided to rally attendees, though actually wearing a mask won't be required.

CNN reported that rallygoers who RSVP'd to gain admission to the event had to agree to a disclaimer that states they acknowledge the "inherent risk of exposure to COVID-19 exists in any public place where people are present."

A campaign source tells CNN's Ryan Nobles that the President will only make remarks inside the rally and no longer speak to an overflow crowd outside of his Tulsa rally.

A campaign source said the campaign had been leaning toward canceling the outdoor portion, for fear of angering the President if there aren't as many people there as he expected when he lands.

There are currently only a couple dozen people standing near the outdoor stage where Trump had been scheduled to speak.

A staffer for Vice President Mike Pence told CNN that Pence will not be speaking outside.

A CNN producer who signed up for rally tickets has received this text from the Trump campaign: "The Great American Comeback Celebration's almost here! Doors are OPEN at the BOK Center. Pres. Trump can't wait. There's still space!"

The Trump campaign had touted that more than one million people had requested tickets to the rally.

Here are scenes from the overflow locations taken by CNN's Jeremy Moorehead and Abby Phillip: 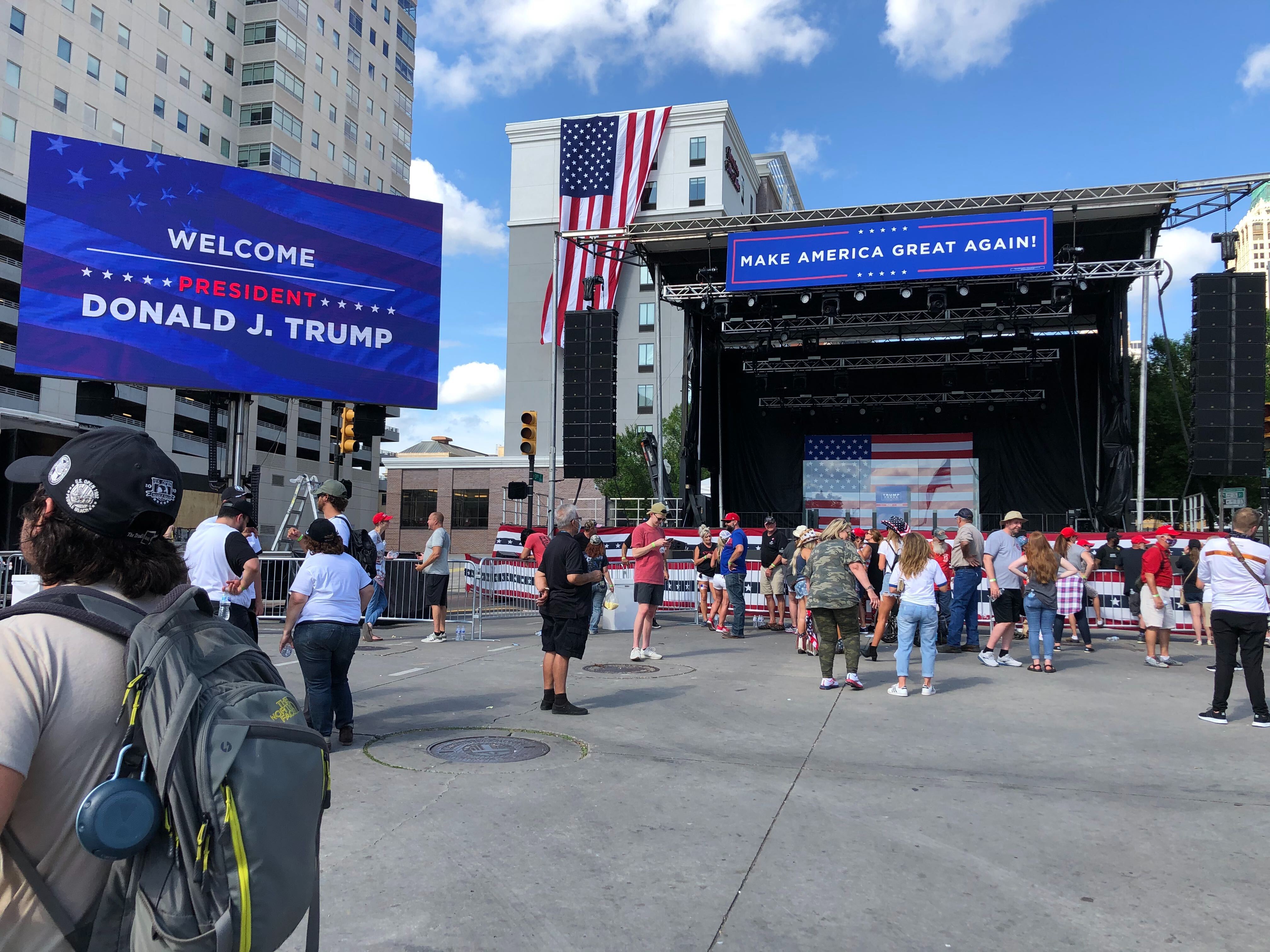 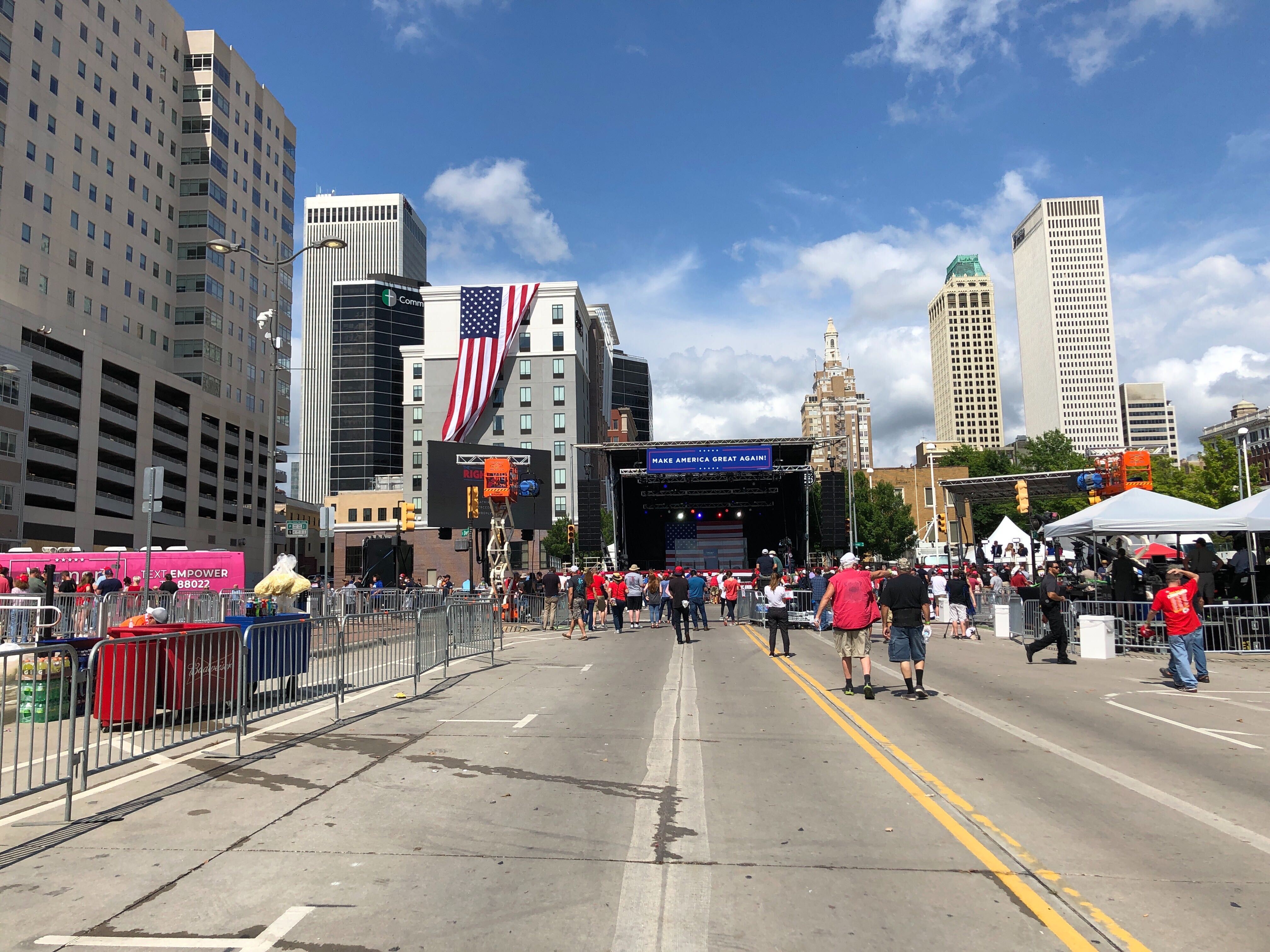 Despite rising coronavirus cases in Oklahoma, President Trump is hosting a rally tonight in Tulsa that is expected to be attended by thousands.

Trump said in a Wall Street Journal interview earlier this week that some people at the rally this Saturday may catch coronavirus, but added “it’s a very small percentage.”

Oklahoma is seeing a steady increase in its average of new confirmed cases per day. Here are the latest figures: 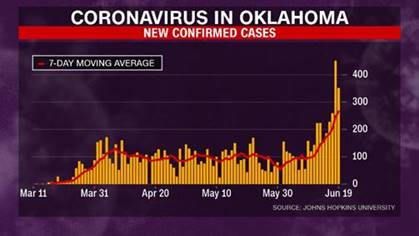 "Unfortunately, we continue to set new records in the number of cases reported in Tulsa County," Bruce Dart, the director of the Tulsa Health Department, said Wednesday at a news conference.

Dart recommended Wednesday that the Trump rally be postponed "until it's safer, until the data tells us that it's not as large a concern," to have people in enclosed spaces.

Rally attendees will not be required to maintain social distance or wear masks, despite the Trump administration's top public health officials stressing the importance of both measures in preventing the spread of coronavirus.

CNN's Abby Phillip spoke to Trump supporters outside the rally about the latest Covid-19 numbers:

Hundreds of supporters gathered outside Tulsa's Bank of Oklahoma Center arena since early Saturday morning ahead of President Trump's rally.

Among the supporters was a visible law enforcement presence, according to video footage taken by CNN's Jeremy Moorhead.

Attendees began entering the rally arena roughly five hours before Trump was set to speak, and the overwhelming majority of them appeared to not be wearing masks.

The Trump campaign has previously said that it takes "safety seriously," and noted hand sanitizer, temperature checks and masks will be provided to attendees, though actually wearing a mask won't be required.

Watch the videos below:

Concerns about the potential spread of coronavirus and ongoing demonstrations against racial injustices do not appear to be stopping President Trump from visiting Tulsa on Saturday for his first rally since the start of the Covid-19 pandemic.

As Trump has used the last month to tout the nation's "transition to greatness" amid a pandemic affecting the Americans' health and wealth, the Oklahoma campaign event will serve as a political opportunity to signal to supporters that they're getting back to normal.

Trump is eager to resume the boisterous rallies that he believes were key to his 2016 victory at a time when his reelection prospects have dimmed, in large part because many Americans disapprove of his handling of both the coronavirus and his response to calls for racial justice that are gripping this country.

Trump is also seeking to shift public attention from his especially difficult week, which included a series of unflattering bombshells revealed in a new book by his former national security adviser John Bolton, who described Trump as unfit for the White House, and two setbacks for his administration on LGBTQ rights and immigration at the Supreme Court.

Late on Friday night, Trump's attorney general tried to oust a powerful US attorney who has investigated a number of associates of the President, but the Manhattan prosecutor refused to step down.

But health experts have cautioned that the rally could lead to increased coronavirus transmissions. And the Trump campaign, seeming to acknowledge the risk, has required prospective attendees to sign liability waivers in order to sign up for the event.

The event in Tulsa — the site of a 1921 massacre on African Americans — originally scheduled to take place on Juneteenth — the oldest regular celebration of the end of slavery in the United States — was announced two and a half weeks after the death of a Black man, George Floyd, at the hands of Minneapolis police officers.

Trump later pushed the rally forward a day, saying it was "out of respect" for his African American friends and supporters.

Though Trump has said he didn't originally schedule the event to take place on Juneteenth "on purpose," the campaign also seems to be utilizing the event for its Black surrogates to share the spotlight. The campaign is flying several Trump supporters, including more than two dozen Black Trump surrogates, to the event.

Asked Friday whether anyone in the White House had any reservations about proceeding with the rally despite a recent spike in coronavirus cases in Oklahoma, McEnany said no one was concerned.

“We are all on board for going to Oklahoma,” she said.