Our live coverage of Trump's rally has ended. Scroll through the posts below to see how the event unfolded. 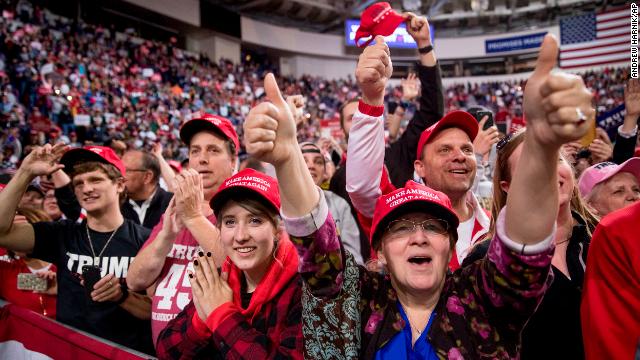 President Trump just wrapped up his rally in Green Bay, Wisconsin, which he hosted instead of attending the annual White House Correspondents' dinner in Washington, DC.

The President spoke for just shy of an hour and a half.

President Trump falsely claimed that babies in Wisconsin can be "executed" after the Democratic governor Tony Evers said he would veto a bill that would require doctors to provide medical care to babies born alive after a failed abortion attempt or face a large fine or/and imprisonment.

"But your Democrat governor here in Wisconsin, shockingly, stated that he will veto legislation that protects Wisconsin babies born alive. The baby is born, the mother meets with the doctor, they take care of the baby, they wrap the baby beautifully, and then the doctor and the mother determine whether or not they will execute the baby," Trump said.

Trump's claim that mothers and doctors are permitted to execute a baby after it leaves the womb is incorrect. The bill he is referring to would mandate that health professionals do all they could to keep a baby alive if it was "born alive" and would penalize anyone who lets a baby die.

"No, it’s incredible. Until this crazy man in Virginia said it, nobody even thought of that, right?" Trump said at his rally tonight. 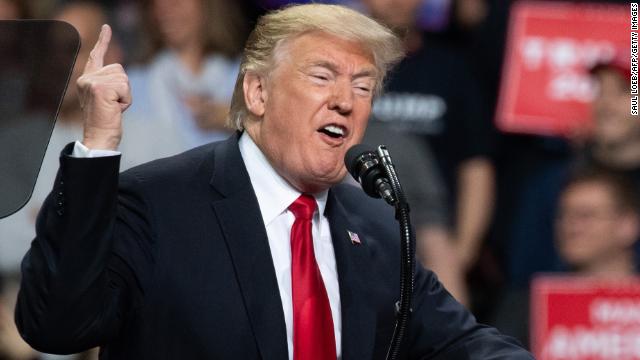 President Trump said the US is sending many people who cross the border illegally to sanctuary cities — adding that it was his "sick idea" to do so.

"We're sending many of them to sanctuary cities, thank you very much," 'They're not too happy about it. I'm proud to tell you that was actually my sick idea."

Earlier this month, the Trump administration said it is "strongly looking at" the possibility of releasing immigrants into so-called sanctuary cities in part to retaliate against Democrats.

The proposal is another example of Trump's willingness to enact hardline immigration policies to deliver on border security, a key issue for his political base.

Some context: The term "sanctuary city" is a broad term applied to jurisdictions that have policies in place designed to limit cooperation with or involvement in federal immigration enforcement actions. Cities, counties and some states have a range of informal policies as well as actual laws that qualify as "sanctuary" positions.

During a riff about getting countries around the world to pay more for their own defense, President Trump defended his support for Saudi Arabia.

“You have people wanting to cut off Saudi Arabia. They bought $450 billion. I don’t want to lose them!,” he told the crowd.

“But the military, we subsidize them,” Trump continued, getting back to his original point.

Trump then described his negotiation tactic with the king of Saudi Arabia.

“I called the king. I like the king. I said, king! We’re losing our ass defending you, king, and you have a lot of money!”

He said the king asked him why he was calling, because nobody had made such a call.

“That’s because they were stupid!” The President said he replied.

President Trump made the case that the United States could not comply with the Paris Climate Accord because it would get sued, whereas countries like China would not.

“China can sign rules. They’re not going to be sued by Greenpeace,” the President explained at a rally in Green Bay.

“If Greenpeace goes to China, that’s the end of Greenpeace. You’re not going to see them again,” he said, adding, “We adhere to these things. It’s a little different.”

Trump said the United States, “would have lost our ass on that deal.”

He also made light of violent protests in the streets of Paris, and seemed to imply that the so-called Yellow Vest protesters were his “friends.”

“I say, take a look at Paris on a Saturday afternoon. How are they doing, good?” he asked rhetorically. “How are the yellow vests doing?”

“They’re great friends of mine, but I don’t think they’re doing so good,” he said. 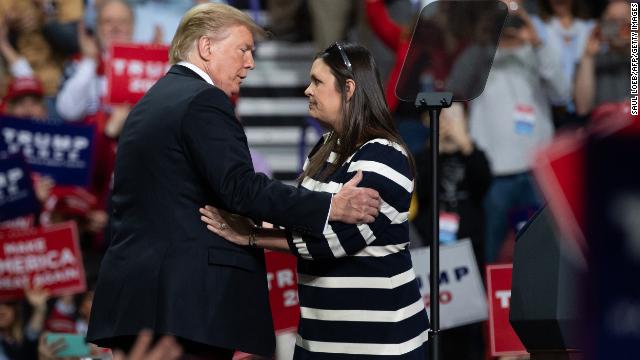 Trump had made a reference to Sanders as talked about his campaign. That's when the crowd started chanting her name, and Trump invited her to the podium.

"Thank you, Mr. President," she said.

"Last year this night, I was at a slightly different event. Not quiet the best welcome. So this is an amazing honor," she said, referencing the 2018 White House Correspondents' Association dinner.

The annual dinner is happening in DC tonight. This marks the third year in a row Trump has skipped it — and this year, the White House ordered administration officials to boycott it, too.

President Trump addressed rumors and speculation over whether he would leave the presidency peacefully after two terms.

“They don’t believe I’m leaving in six years,” Trump said to the crowd in Green Bay.

He mimicked his critics saying, “He wants to extend, he wants to have the presidency for life.”

“These are sick people,” Trump added.

“I promise at the end of six years, I’ll be very happy. But you’re going to be left with the strongest country you’ve ever had,” the President said.

He also attacked the “scum leading the top of government,” and again seemed to imply that officials at the Justice Department were leaving in the wake of the Muller investigation.

“These were dirty cops,” Trump said. “They’re just leaving because they got caught like nobody ever got caught.”

The President made similar comments yesterday to leadership at the NRA but has not said to whom specifically he is referring.

President Trump called Jussie Smollett — the "Empire" actor who had been accused of staging a hate crime and filing a false police report, but later had all charges dropped against him — a "third-rate actor."

"That case in Chicago is a disgrace to our nation," Trump said. "He said he was beat up by 'MAGA country.' Turned out to be a total lie."

What Smollett alleged happened: Police said that the actor told detectives he was attacked earlier this year by two men near the lower entrance of a Loews hotel in Chicago. Police were told the two men yelled "'Empire' fa***t" and "'Empire' n***er'" while striking him.

In a supplemental interview with authorities, Smollett claimed one of the attackers also shouted, "This is MAGA country," a reference to President Donald Trump's "Make America Great Again" campaign slogan.