President Donald Trump again falsely claimed on Friday that he predicted the Brexit vote results ahead of the referendum during a visit to his Turnberry golf course in Scotland in 2016.

"Well, if you remember, I was opening Turnberry the day before Brexit," Trump said, "and I said, 'What's going on?' And all they wanted to talk about was Brexit and they asked for my opinion and I think you will agree that I said I think Brexit will happen. And it did happen. And then we cut the ribbon."

What Trump actually said: The then-presumptive Republican nominee hailed the UK's shock decision to "reassert control over their own politics, borders and economy" the day after Brexit, calling the decision of the voters "a great thing."

The UK newspaper The Sun has released a portion of audio from its interview with President Donald Trump in which he criticized Prime Minister Theresa May's "soft Brexit" negotiations.

Trump told the press the paper's coverage of his interview was "fake news," that it left out or failed to highlight his positive remarks about May, and that he had apologized to the Prime Minister over it -- though she told him not to worry as "it's just the press."

Here's a portion of what they've released. Overall, the paper released about eight and a half minutes of audio, though the article specifies that the interview lasted 28 minutes. 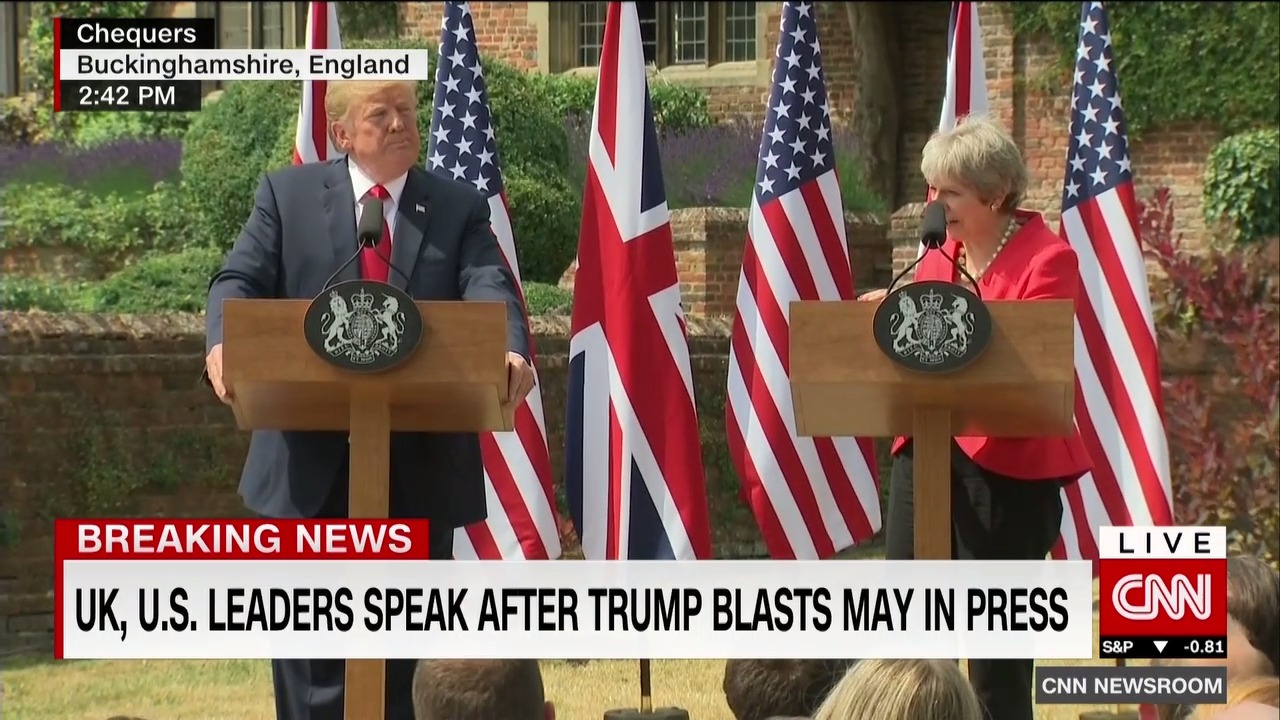 President Trump said he apologized to Prime Minister Theresa May this morning over the interview with The Sun, in which Trump said May had ignored his advice on Brexit and praised former Foreign Secretary Boris Johnson.

"She's a total professional," Trump said. "I said, 'I want to apologize because I said such good things about you,' And she said, 'Don't worry, it's only the press,'" Trump said of their purported conversation.

Trump added that he wished the paper put the "tremendous things" he said about May in its headline, but acknowledged, "That's one of those things."

President Trump described the US-UK relationship as the "highest level of special," before saying British Prime Minister Theresa May may have seen suggestions he gave her about Brexit as "too brutal."

"I would give our relationship with the UK, and now especially that have two days with your prime minister, I would say the highest level of special," Trump said.

Then Trump turned to suggestions he gave May about how to handle Brexit.

What Trump said to a British newspaper: The President on Thursday night delivered an astonishing political knifing of the British Prime Minister, comprehensively undermining her fragile position in Britain's tortuous negotiations on leaving the European Union and getting his visit to the country off to the most explosive of starts.

In an interview with the Rupert Murdoch-owned newspaper The Sun, Trump said May had ignored his advice on Brexit, he praised former Foreign Secretary Boris Johnson -- who has just walked out of her Cabinet over the issue -- and he said May's cherished hope of a free trade deal with the US would be killed off by her softened approach.

President Donald Trump blamed his predecessor President Barack Obama for the Russian annexation of Crimea and claimed Crimea would not have been annexed had he been President then.

"This was an Obama disaster. I think if I were President then, he would not have taken over," Trump said. "I don’t think he would have done that with me as President.”

When pressed as to how he will now resolve the issue since he is now President, Trump said, "We will look at that just like I'm looking at many other disasters I've taken over." 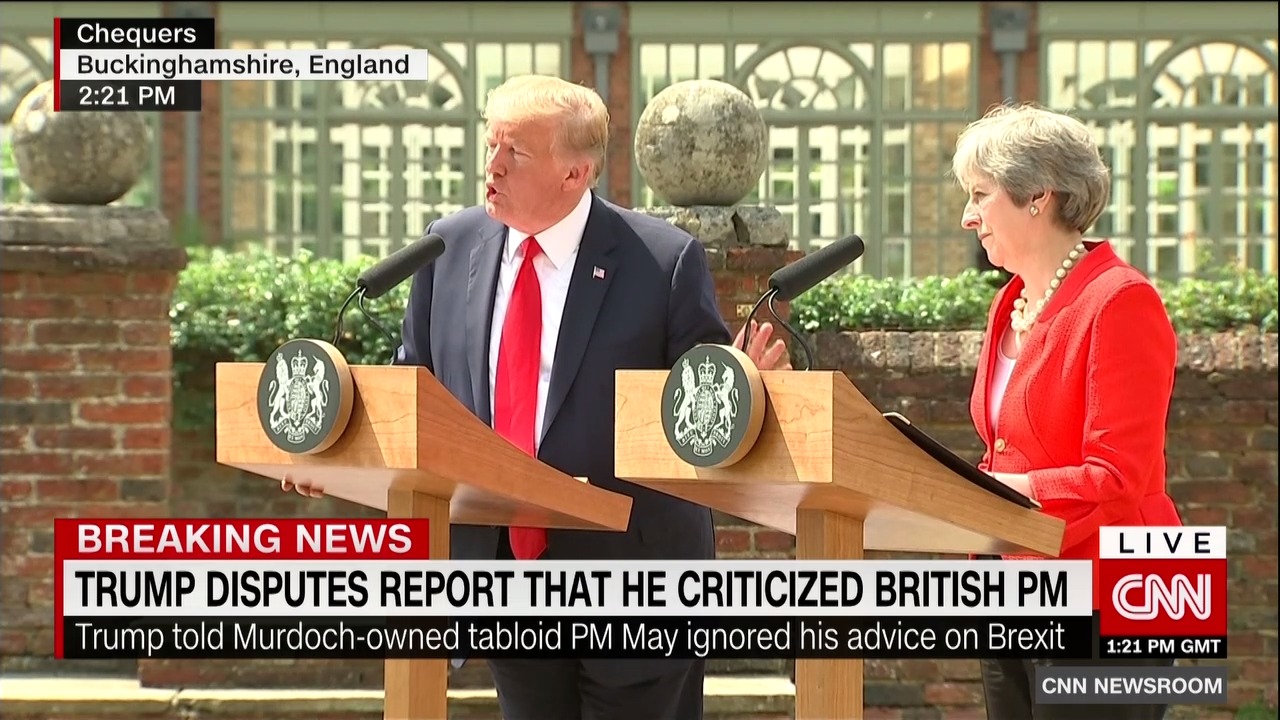 President Trump was asked about his remarks to The Sun, where he said recently departed foreign secretary Boris Johnson would be a great prime minister.

He again said the White House would release a tape of the interview, claiming the remark was "unrelated."

"We taped the entire interview. They asked about Boris Johnson. How would he be as a prime minister? I said he'll be a great prime minister. He's been very nice to me. He's been saying very good things about me as president."

On May, he then added, "I also said that this incredible woman right here is doing a fantastic job, a great job. And I mean that." 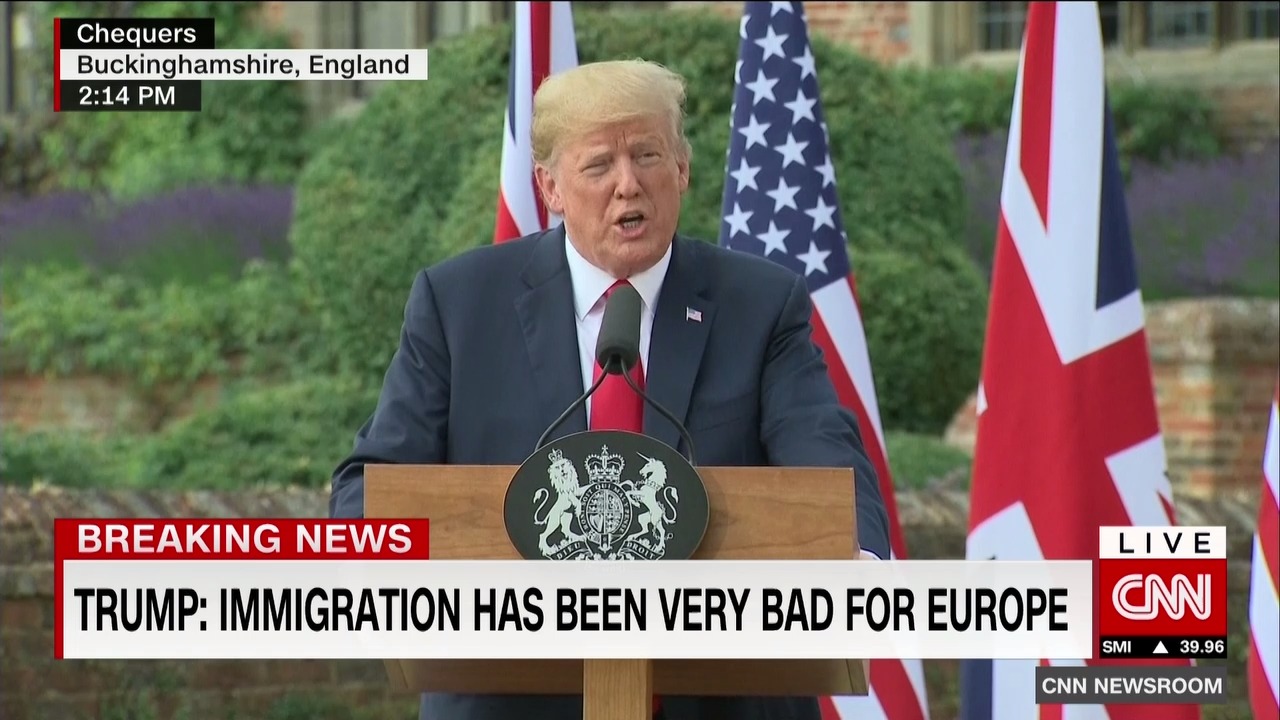 Hours after his wide-ranging interview with The Sun newspaper, in which he said he felt the UK was “losing its culture” because of immigration, Trump doubled down, telling a reporter, "It's been very bad for Europe."

"I think Europe is a place I know very well, and I think that what has happened is very tough. It's a very tough situation. I mean, you see the same terror attacks that I do. We see them a lot," Trump said.

President Trump again said he will ask Russian President Vladimir Putin about Russian election meddling. The two leaders have a summit on Monday.

"I know you'll ask, 'Will we be talking about meddling?'" Trump said to a reporter. "And I will absolutely bring that up."

He said Putin likely will not admit to meddling. 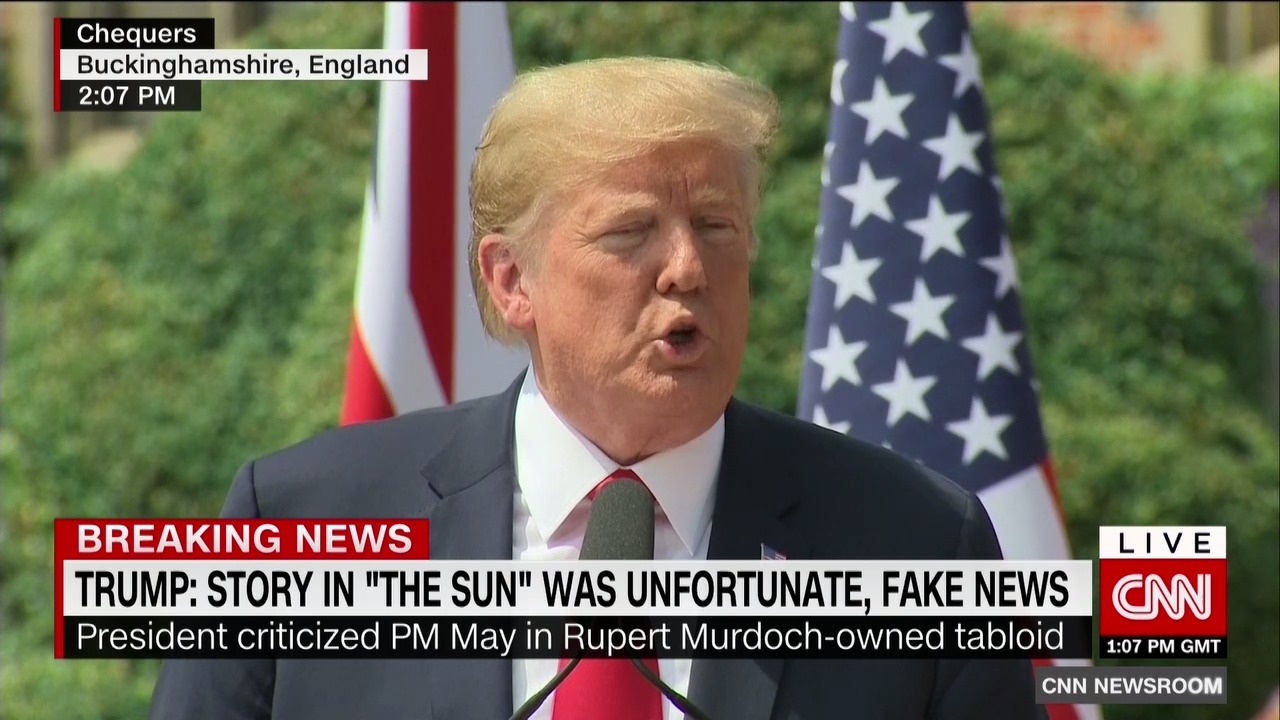 President Trump hit back against an interview with the Rupert Murdoch-owned newspaper The Sun in which he said British Prime Minister Theresa May had ignored his advice on Brexit.

Trump added that he had a recording of the interview and it would support his argument.

"Fortunately, we tend to record stories now, so we have it for your enjoyment if you like it. But we record when we deal with reporters. It's called fake news."

In the same interview with the Sun, Trump praised former Foreign Secretary Boris Johnson -- who has just walked out of her Cabinet over the issue -- and said May's cherished hope of a free trade deal with the US would be killed off by her softened approach.