Our live coverage of day two has ended. Scroll through the posts below to read more or head here for coverage of the final day of Trump's UK state visit.

Here are some details about the seating arrangements:

Here are a few of the notable attendees:

Ever wonder what it's like to eat like royalty? Here’s what’s on the menu tonight as President Trump and first lady Melania Trump host Prince Charles and the Duchess of Cornwall at Winfield House: 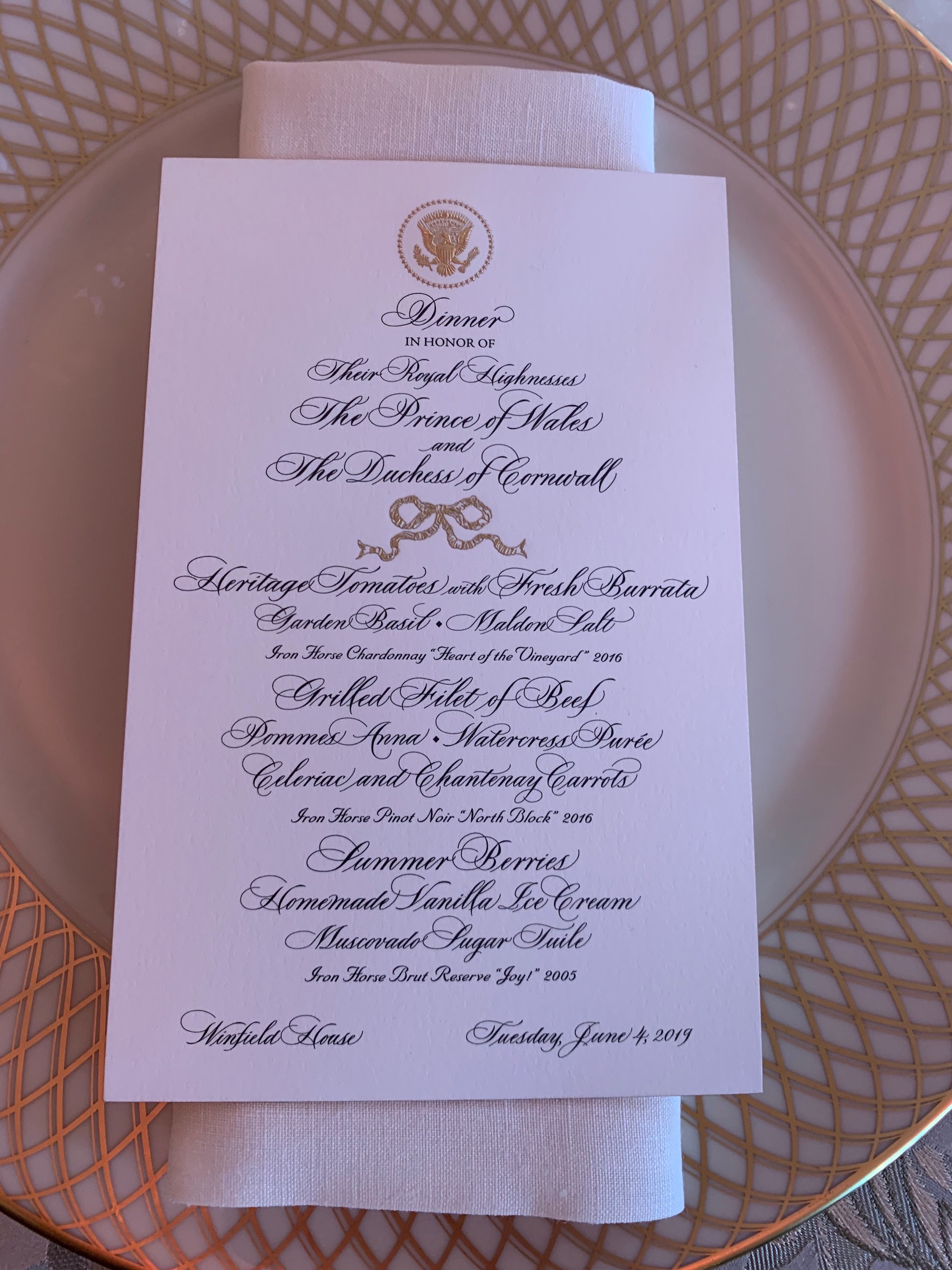 The Trumps welcomed Charles and Camilla at the US ambassador’s residence in Winfield House in Central London.

CNN's Kate Bennett reported that the first lady has been working on all the details for the dinner for the past several weeks, including the menu, guest list, seating charts and flowers.

"She was very actively involved planning it back home at the White House. But working in concert with the people here at Winfield house in London as they host this dinner," Bennett noted. "This is a reciprocal dinner — the night after the state banquet at Buckingham Palace. This is something the Obamas did as well. They hosted the Queen and Prince Philip and tonight we'll see Prince Charles and Camilla in the place of the Queen."

Nigel Farage, the leader of the Brexit Party, took to Twitter Tuesday following his meeting with President Trump at the US ambassador’s residence in Winfield House in central London.

Here's what he said about the meeting:

Britons' passion to show their dislike of the America President somewhat fizzled today — at least compared to the hundreds of thousands of protesters that thronged through Central London at last year’s anti-Trump protest.

The rainy forecast didn't lend any favors to the organizers of the midweek protest. (For comparison, 2018’s demonstration had clear skies and took place on a Friday.)

Here's what both protests had in common: the 20-foot "Trump Baby" blimp took the skies. UK opposition Labour Party leader Jeremy Corbyn made a speech, while London Mayor Sadiq Khan and Trump were trading barbs.

But that’s not to say there wasn’t any spirit on display on Tuesday. “Our NHS is NOT on the table,” read one sign, in reference to Woody Johnson, the US ambassador to the UK, indicating that Britain's publicly funded health system could feature in future trade negotiations with the UK.

Some protesters used the gathering in Trafalgar Square, and its ensuing rain-filled march to outside Parliament, as an opportunity to air their opposition to Trump’s stance on immigration, women’s rights and climate change.

“Someone in a position of power should not be denying science, they shouldn't be denying something that is fundamentally undeniable,” said 15-year-old student Izzy Warren, who is part of a coalition of young climate change activists responsible for a series of strikes across the country over the issue.

Behind her, a crowd of thousands chanted: “‘Say it loud say it clear Donald Trump is not welcome here.”

Barely an hour after Donald Trump's joint press conference with Theresa May ended, all eyes shifted to the spectacle of Nigel Farage, leader of the Brexit Party, being driven into Winfield House, the residence of the US ambassador to London, where Trump is staying.

In the opulent setting of the Foreign Office, Trump was effusive in his praise for the departing May. But the fact that, in the next breath, he was meeting her nemesis, served to underscore the mess the UK's political system is in.

May announced her intention to stand down last month, as her governing Conservative party took a drubbing in the European elections. The winner of that election was none other than Farage, who has capitalized on the government's failure to deliver on the Brexit result.

As Trump stood next to May, he heaped praise on her approach to the Brexit negotiations, said that she was leaving the country in a very good place and even suggested that she might be a better negotiator than the President himself. “I think you deserve a lot of credit. I really do.”

All that will ring a little hollow as he welcomes his "friend" Farage, a man who has twice bought the Conservative Party to its knees over Europe.

Meeting with Trump works for Farage as it plays to his hard Brexiteer base. But the President's limited popularity in the UK makes an endorsement less appealing.

Boris Johnson, the current favorite to replace May, declined a meeting with Trump, citing a previously planned event for his campaign. He did, however, hold a 20-minute phone call with the President.

For Johnson, it’s possible that declining to meet with Trump in person is more useful than a thumping endorsement. Looking too chummy with Trump could come back to bite him, whereas a short phone call shows that Johnson is a mature politician who wants a good relationship with America. Perhaps.

The opposition leader Jeremy Corbyn, meanwhile, spent his afternoon at an anti-Trump rally. This plays well to his base, who loathe Trump's brand of nationalism. One can only imagine how delighted Corbyn was to have Trump call him a “somewhat negative force."

This state visit has been a pleasant distraction from the upcoming mayhem the UK is about to charge headfirst into. But it's hard to ignore the fact that Trump's whirlwind trip has done little more than shake up an already chaotic political landscape.

Brexit campaigner Nigel Farage has been seen entering Winfield House in Regent's Park, the US ambassador's residence in London, where the Trumps are staying during their visit.

A CNN crew saw the Brexit Party leader being driven in to the residence.

There had been speculation about whether Trump would meet Farage during his stay in the UK. The President suggested last week that he might meet Farage, the Brexit Party leader, who he called a "good guy."

The pair could have an interesting conversation: Farage has been a stident critic of Theresa May, who Trump just left a press conference with.

Throughout their joint press conference in London, Trump was effusive in his praise for Theresa May, particularly in relation to her handling of Brexit. It was a marked change in tone from the last time the US President was in the UK, when he had nothing but criticism for the way negotiations were going.

This time, just as May is about to step down as Prime Minister, Trump praised her efforts to take Britain out of the European Union, saying she had "teed up" a Brexit deal for her successor.

"I think it will happen, and I believe the Prime Minister's brought it to a very good point where something will take place in the not-too-distant future, I think she's done a very good job," Trump said.

The outgoing British Prime Minister joked that Trump, on his last visit, had proposed suing the EU. May said she had chosen to negotiate.

"I would have sued and settled, maybe, but you never know," Trump replied. And in a startling comment for a president who regards himself as a master dealmaker, he added: "She's probably a better negotiator than I am."

Trump suggested that history would judge May kindly on her handling of Brexit.

"She has got it, in a sense ... that deal is teed up. I think they have to do something," Trump said. "Perhaps you won't be given the credit you deserve if they do something, but I think you deserve a lot of credit, I really do," he added, as May nodded her thanks.