President Trump joined Queen Elizabeth II and British Prime Minister Theresa May at an event Wednesday to commemorate the 75th anniversary of D-Day.

The President's whirlwind trip has seen a spat with London's mayor, meetings with British royals, a state banquet, a sit-down meeting with May and protests.

Trump is now in Ireland, where he's staying at his golf course. He'll later head to France for a ceremony marking the Normandy landings.

We're wrapping up live coverage for the day, but keep reading CNN for more details about Trump's trip.

Here are some of the highlights from Trump's trip to the UK:

President Trump defended his stay in Ireland saying his trip is not to promote his golf club but about the US-Ireland relationship.

An Irish reporter asked Trump if the visit to Ireland is just to "promote" his golf course.

"No. This trip is really about great relationships that we have with the UK and I really wanted to do this stop in Ireland. It was very important to me because of the relationship I have with the people and your prime minister."

Trump also boasted his "great relationship" with Ireland, saying, "We have millions of Irish (in the US) and I think I know most of them, because they're my friends. We love the Irish."

When confronted with Irish Prime Minister Leo Varadkar's previous comments that his views on climate change were "reckless," Trump said he hadn't "heard those comments" adding, "We have the cleanest air in the world in the United States and it's gotten better since I'm president."

Trump also said he was "looking at" granting Irish citizens access to the E3 visa.

Irish officials have taken notice of President Trump’s first low-key visit as President to Ireland as being more about pleasure than work.

An Irish official says it appears this trip is more about downtime for the President. It could also be an easier way for him to visit Ireland without facing protests if it was a more formal visit with events in Dublin.

The official said as of now the President, who will be spending two nights at his golf resort, is scheduled to play golf on Friday, but the weather could be an issue.

Additionally, acting chief of staff Mick Mulvaney is expected to host a dinner at Doonbeg Thursday evening with Irish officials, including the ambassador to Ireland. Irish Prime Minister Leo Varadkar is not expected to be there.

Soon after arriving in Ireland, Trump met with Varadkar at the airport. 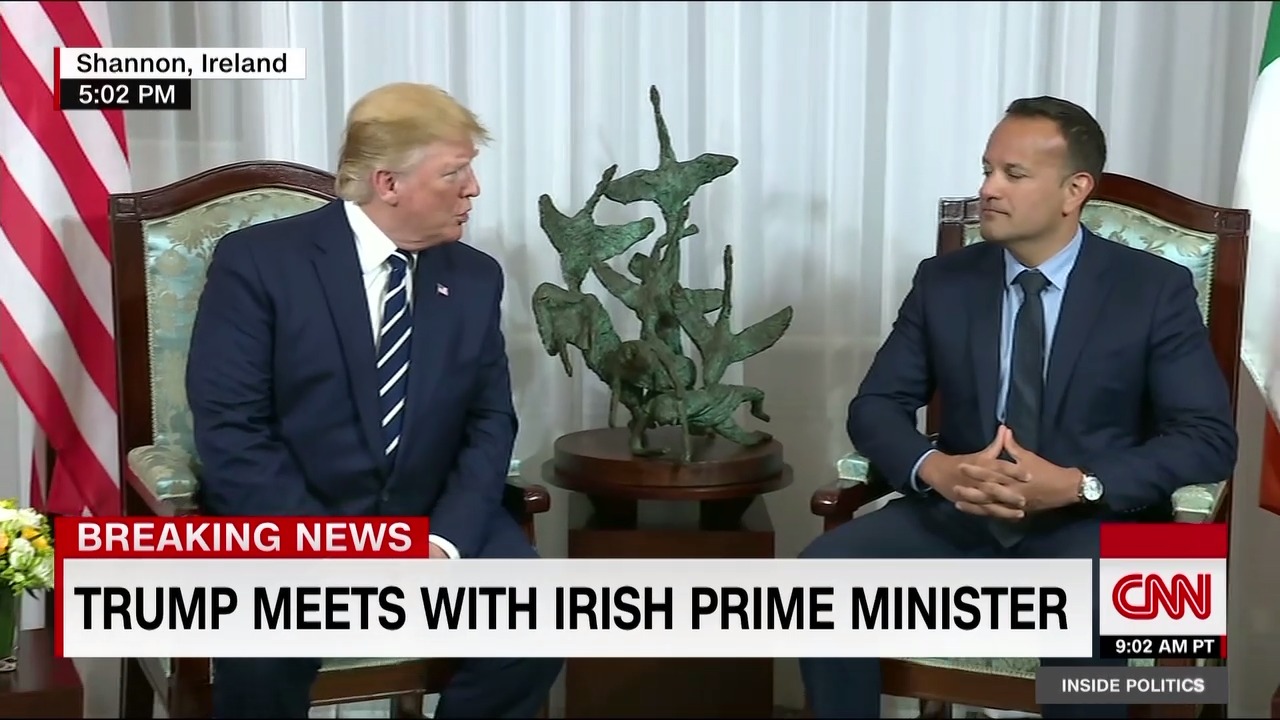 President Trump, in a meeting with Irish Prime Minister Leo Varadkar, said he thinks everything will "work out" when it comes to Brexit.

A reporter asked Trump if Brexit would be bad for Ireland. Here's what Trump said:

Some background: One of the big fears in the Brexit debate is that Britain's departure from the EU will mean the reintroduction of border posts on the frontier between Northern Ireland, which remains part of the UK, and the Republic of Ireland, an EU member. You can read more about the issue here.

Air Force One is wheels down in Shannon, Ireland — marking the first official visit of President Trump to the country.

At the airport in Shannon, Trump will meet with Ireland's Prime Minister Leo Vardakar, who he has met with twice before in Washington for St. Patrick's Day.

Plans for the visit: Trump is due to meet the Irish prime minister at the airport’s VIP lounge — a compromise venue after the Irish government balked at meeting Trump on his golf property.

Trump will spend Wednesday and Thursday night there at his Trump International Golf & Resort in Doonbeg. Tomorrow, Trump travels to Normandy to commemorate the 75th anniversary of D-Day.

Air Force One took off from Southampton Airport around 10:30 a.m. ET (3:30 p.m. local) en route Shannon, Ireland, where Trump will spend two nights at his golf course around a visit to Normandy to commemorate D Day.

Upon landing in Ireland, Trump is due to meet the Irish prime minister at the airport’s VIP lounge — a compromise venue after the Irish government balked at meeting Trump on his golf property.

President Trump and the first lady have departed Portsmouth after participating in a D-Day commemoration ceremony.

He’s in Marine One en route Southampton Airport, where he’ll take Air Force One to Shannon, Ireland — ending his three day visit to the United Kingdom.

US President Donald Trump and German Chancellor Angela Merkel spoke briefly after the D-Day commemorations in Portsmouth, in what the White House described as a "brief pull-aside."

The President's National Security Adviser John Bolton and his acting chief of staff Mick Mulvaney also joined the meeting, after the media was ushered out.

Merkel has been a stringent critic of some of Trump's policies, including his decision to pull out of the Paris Climate Accord. Last week, she told CNN that the pair have "had contentious debates" but that they've managed to find "common ground" where it was needed.

Merkel also spoke briefly to reporters. She called the Normandy landings "a unique, unprecedented military operation that finally brought liberation from national socialism for us in Germany.”

“It demanded incredible sacrifices of hundreds of thousands of soldiers It was a huge logistical effort and it led to something that we can be proud of today, namely reconciliation, unification within Europe, but also the entire post-war order that has now brought us peace more than seven decades," Merkel said.

"And that today, as German Chancellor, I can be here, and together we can join in in advocating peace and freedom together, is a gift of history to be protected and nurtured, and in this spirit today we have spent these festivities as well this commemoration.”

A wedding ring and a photograph are all Leon Lomax has left to remember his mother by, a woman he has longed to know his whole life.

Leon's white British mother met his African-American GI father during World War II, when he was stationed at RAF Birch, an airbase in Essex, southeast England.

When Leon was born in December 1945, his mother, who was unmarried, left him in a children's home. He has a "distant memory" of what he thinks was the last time he saw her -- and remembers "standing in the corner of a crib and crying real hard."

Leon, now 73, is still haunted by the choice his mother made. For decades, he has wondered: Did she want to give him up, or was she forced to?

"I just want to know what conditions she was under," he tells CNN, from his home in Ohio. "I always thought about trying to find her."

He's not alone. Historian Lucy Bland estimates that around 2,000 mixed-race children were born in the UK to British women and African-American servicemen between 1943 and 1946.

The US Army refused permission for black GIs to marry their pregnant white girlfriends and so the babies they gave birth to were branded "illegitimate."