President Trump speaks at the UN

Our live coverage of Trump's UN General Assembly speech has ended. Scroll through the posts below to see how his morning played out. 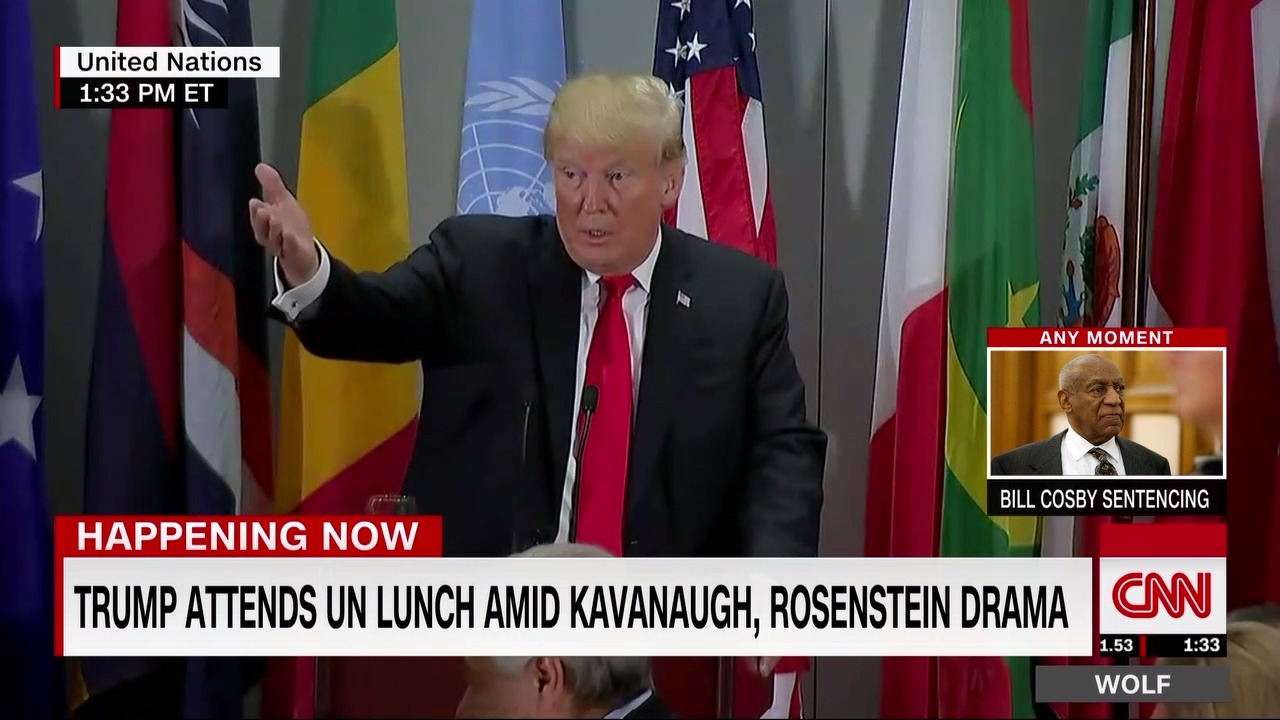 President Trump acknowledged his changed tone on North Korea during remarks at a UN luncheon on Wednesday.

"Last year my tone was somewhat different on North Korea than it is now," Trump said.

He said he was expecting progress in his dealings with Kim Jong Un, but acknowledged: "As the expression goes, who knows."

During his address to the UN last year, Trump called Kim "Rocket Man" and warned warned the US would "totally destroy North Korea" if forced to defend itself or its allies

But this year, he said North Korea has taken "encouraging measures" following his summer summit with Kim. He even thanked the North Korean leader for the country's progress.

President Trump said the US would be announcing sanctions targeting Venezuela today and appealed to other nations to call for the "restoration of democracy" in the South American country. 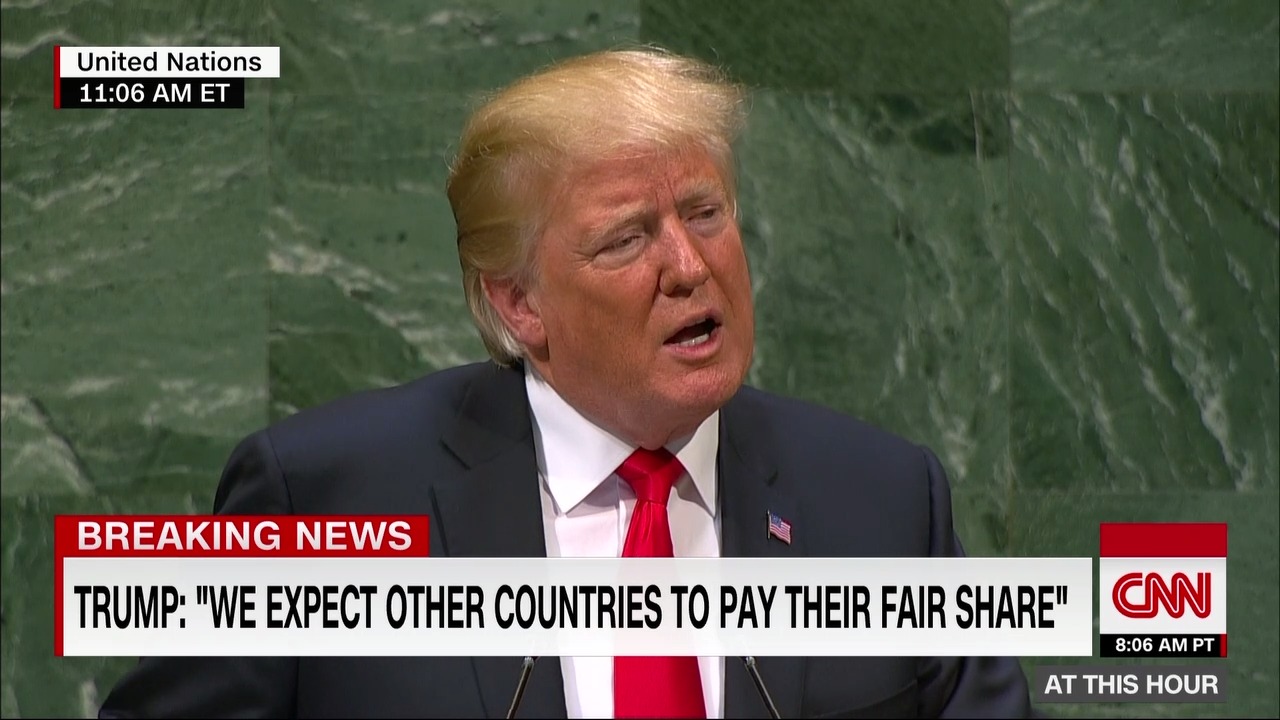 President Trump said the US is "taking a hard look" at the foreign aid it sends to other countries and the financial support it provides to international organizations.

"Few give anything to us. That is why we are taking a hard look at US foreign assistance. We will examine what is working, what is not working and whether the countries who receive our dollars and our protection also have our interests at heart," Trump said. "Moving forward we are only going to give foreign aid to those who respect us and frankly our — our friends. And we expect other countries to pay their fair share for the cost of their defense."

Promising to make the UN "more effective and accountable," Trump also vowed to change how the US funds the international body's various programs and where US dollars are spent.

"Only when each of us does our part and contributes our share can we realize the UN's highest aspirations," Trump said.

President Trump, claiming the U.N. Human Rights Council had become "a grave embarrassment to this institution," said the US would not return to it without real reform and would provide neither support nor recognition to the International Criminal Court for similar reasons.

He added, "We will never surrender America’s sovereignty to an unelected, unaccountable, global bureaucracy."

Those comments, Human Rights Watch just said in a statement to CNN's Richard Roth, "are music to the ears of tyrants and war criminals."

In a play on his campaign slogan, President Trump said on Tuesday that a global migration crisis can be resolved by making every country "great again."

He said the US would not sign onto a global migration pact, saying individual nations should instead set their own policies.

"Only by upholding national borders, destroying criminal gangs, can we break this cycle," he said.

He said the US would "recognize right of every nation in this room to set own policy."

The only way to prevent people from leaving their nations is to "make their countries great again."

Watch Trump talk about immigration at the UN:

Citing his bids to renegotiate trade deals around the world, Trump said during an address at the United Nations that "many nations in this hall will agree the world trading system is in dire need of change."

Singling out China for its trade abuses and theft of US intellectual property, Trump said "we will no longer tolerate such abuse."

"We will not allow our workers to be victimized, our companies to be cheated," Trump said.

Stressing he still has "great respect and affection" for Chinese President Xi Jinping, Trump said "America will always act in our national interests." 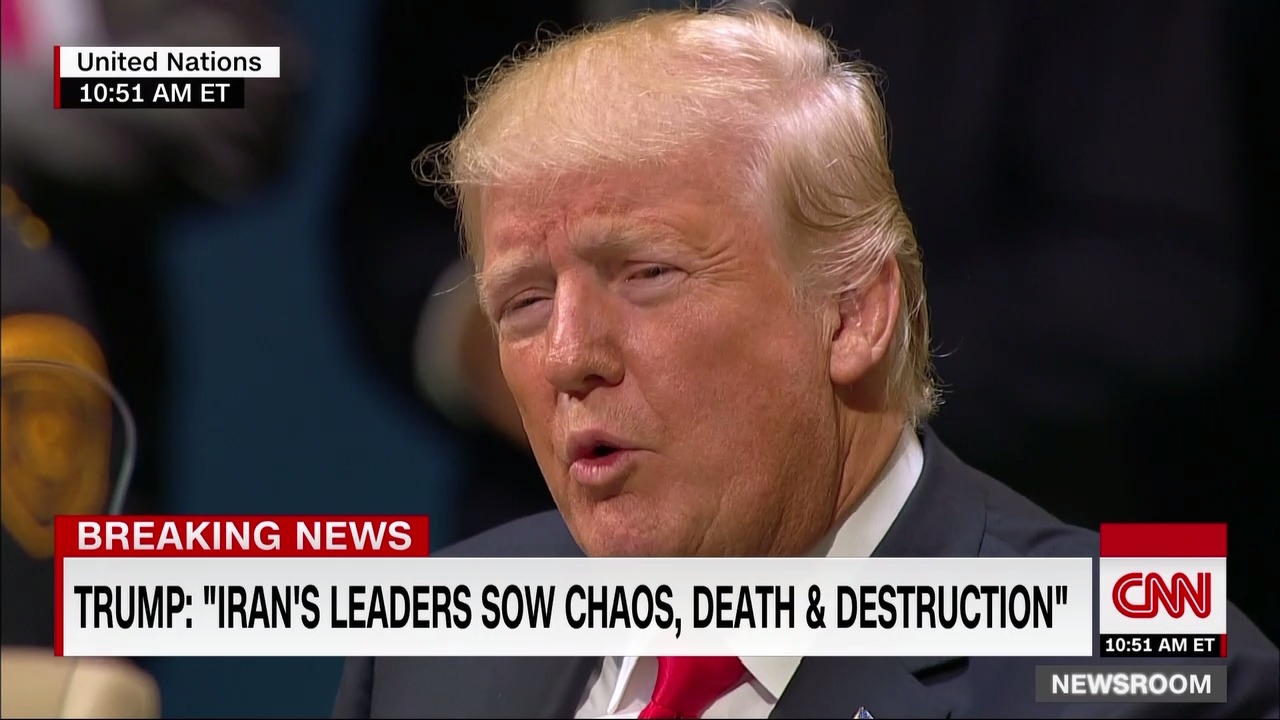 President Donald Trump on Tuesday castigated Iran for sowing "chaos, death and destruction" in the Middle East and urged other countries to join the US in resuming economic pressure on the Iran.

The US President trumpeted his decision to withdraw from the Iranian nuclear deal, calling it "horrible," and noted that "many countries in the Middle East strongly supported" his decision.

"Iran’s leaders sow chaos, death and destruction they do not respect their neighbors borders or the sovereign rights of nations," Trump said.

"Iran’s leaders plunder the nation’s resources to enrich themselves and to spread mayhem across the middle east and far beyond. The Iranian people are rightly outraged that their leaders have embezzled billions of dollars from Iran's treasury, seized valuable portions of the nation’s economy…all to send out their proxies to wage war."

Trump said the US has launched "a campaign of economic pressure to deny the regime the funds that it needs to advance its bloody agenda."

He said additional sanctions will resume in the coming months and said the world must ensure that "the world's leading sponsor of terrorism to possess the world’s most dangerous weapons."

He vowed to continue to support "Iran's people." 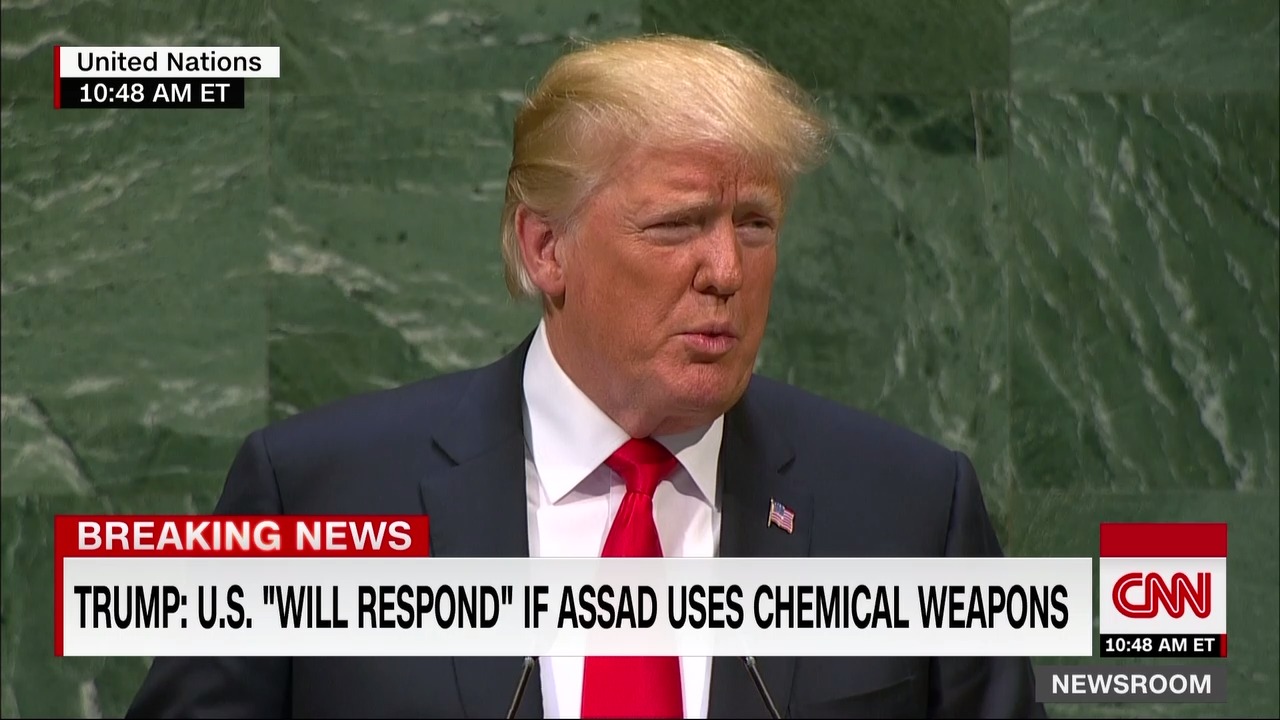 President Trump on Tuesday stressed sovereignty as he began his United Nations speech.

“Each of us here today is the emissary of a distinct culture, the rich history, and a people bound together by ties of memory, tradition, and the values that make our homelands like nowhere else on earth,” he said.

He continued: “That is why America will always choose independence and cooperation over global governments, control and domination. I honor the right of every nation in this room to pursue its own customs, beliefs, and traditions. The United States will not tell you how to live or work or worship. We only ask that you honor our sovereignty in return.”

Later, he added that "America is governed by Americans" and  rejects "the ideology of globalism."

Expect this theme to continue throughout his remarks. The administration has recently made several moves to put this effort on display, including most recently a decision to cut funding for the UN agency that supports Palestinian refugees and a speech by his national security adviser John Bolton undercutting the International Criminal Court.