Our live coverage of President Trump's speech at the United Nations has ended, but you can scroll through the posts to read more.

Here's how it went down:

The meeting comes days after the world leaders gathered in Houston on Sunday for an event dubbed "Howdy, Modi!"

At the rally, Trump credited the Indian-American community with "helping to strengthen our country and build our future," citing its contributions to medicine, business and technology.

The President also praised Modi's leadership and touted the "stronger than ever before" relationship with India. He said India "has never had a better friend as President than President Donald Trump."

An employee of the Venezuelan embassy tweeted a photo of herself reading a book during President Trump's speech at the United Nations General Assembly earlier today.

The employee, Daniela Rodríguez, also shared a photo of the book she was reading.

#24SepThis is the book I read while @realDonaldTrump, desecrated the General Assembly of the #ONU with his xenophobic and imperialist speech. Long live Bolivar! Long live Venezuela! Long live the Venezuelan people who do not bow to any empire! #HandsOffVenezuela," she tweeted in Spanish.

What Trump said about Venezuela today: Trump took a shot at Venezuela's Nicolás Maduro in his speech, calling him a "dictator" and a "Cuban puppet."

"The dictator Maduro is a Cuban puppet, protected by Cuban bodyguards, hiding from his own people while Cuba plunders Venezuela's oil wealth to sustain its own corrupt, Communist rule," Trump said. 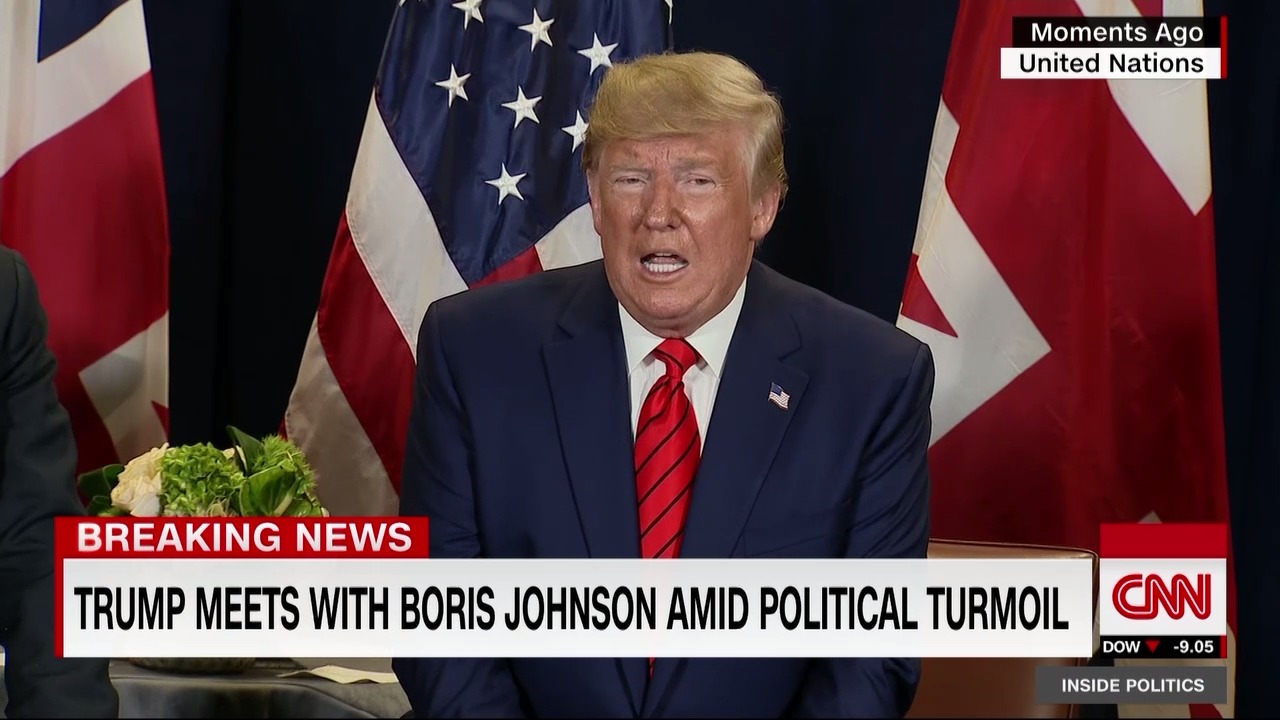 President Trump, asked about reporting that he put a hold on millions in military aid to Ukraine a week before the phone call to the nation's president, said he withheld the aid because other countries were not also spending.

Trump said that the payment was eventually made.

The President made similar comments earlier today as he arrived at the United Nations.

"We’re putting up the bulk of the money. And I’m asking why is that?” Trump said earlier today. “Why is it only the United States putting up the money? And by the way, we paid that money. ”

UK Prime Minister Boris Johnson reiterated his position that he did not agree with the ruling of the UK Supreme Court, which found that his decision to prorogue — or suspend — Parliament for five weeks was unlawful. However, he said that he respected that will of the courts.

Asked about the ruling at a bilateral meeting with President Trump at the United Nations General Assembly in New York, Johnson said this:

“As I said earlier on, let’s be absolutely clear we respect the judiciary in our county we respect the court. I disagree profoundly with why they had to say I think it was absolutely right to go ahead with the Queen's speech.” 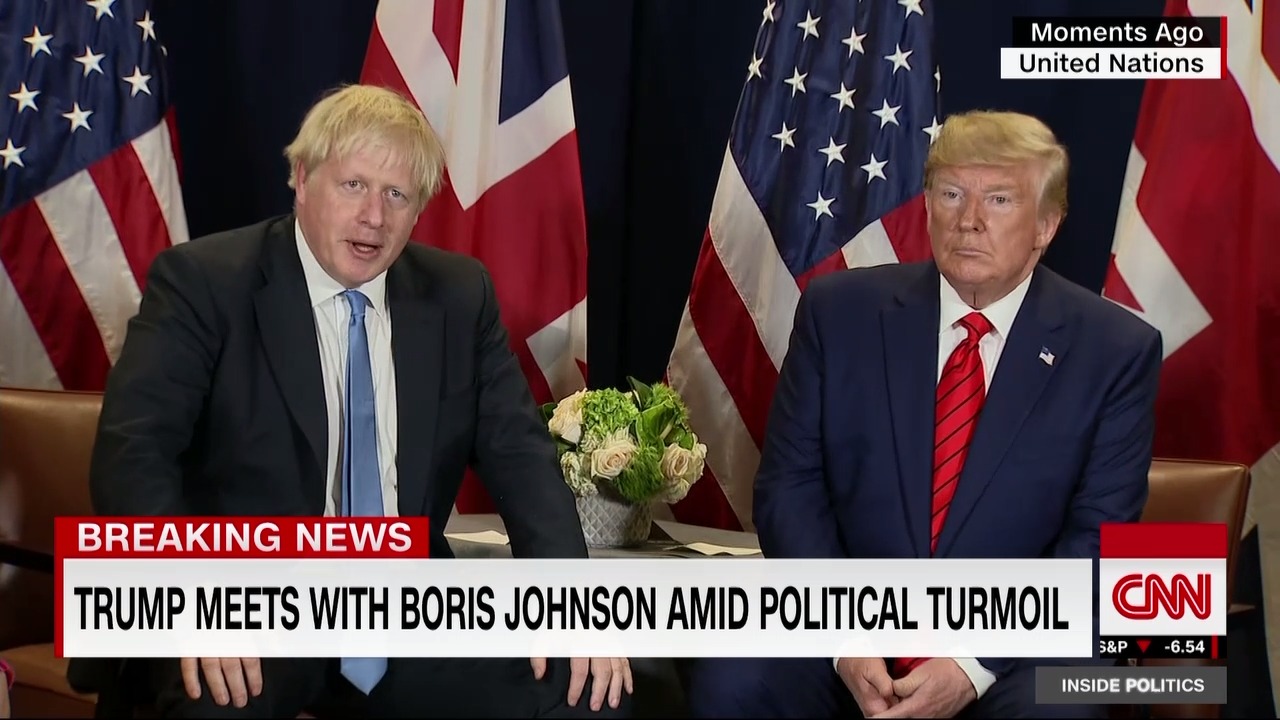 President Trump, speaking alongside UK Prime Minister Boris Johnson, appeared to joke that Johnson is having an "easy time."

"It's great to be with my friend, Boris Johnson. He just got a position that he's having a very easy time with — It's much easier than he thought," Trump said.

For context, earlier today, the UK's Supreme Court ruled that Johnson suspended the nation's Parliament unlawfully. The landmark decision was unanimous, and it was a major blow for the prime minister.

Earlier today, in a speech to the UN, Trump said he has worked closely with Johnson on a new trade deal for after the UK move forward with Brexit.

"I have made clear that we stand ready to complete an exceptional, new trade agreement with the UK, that will bring tremendous benefits to both of our countries," Trump said.

The backdrop to this meeting: Today, the UK's Supreme Court ruled that Johnson suspended the nation's Parliament unlawfully.

The landmark decision was unanimous, and it was a major blow for the prime minister. After the ruling, the Brexit party chairman said the UK would not leave the EU on October 31 as planned. 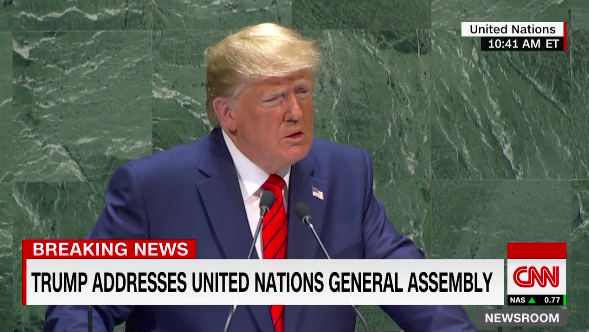 President Trump chastised a "permanent political class" that is "overly disdainful" during remarks at the United Nations on Tuesday, claiming they — along with the media, economic institutions and technology companies — were pushing " flat-out assaults on our histories, traditions and values."

The populist message came as Trump's administration has questioned social media companies for what it claims are anti-conservative biases. Trump said he was working to ensure all voices are heard.

"A small number of social media platforms are acquiring immense power, over what we can see and over what we are allowed to say," he said.

"A free society cannot allow social media giants to silence the voices of the people," he went on. "And a free people must never, ever be enlisted in the cause of silencing, cancelling or blacklisting their own neighbors."

President Trump spelled out a staunchly nationalist platform as he opened his third address to the United Nations, relaying a skeptical view of globalism at the world’s foremost multilateral body.

“The free world must embrace its national foundations. It must not attempt to erase them or replace them,” Trump said as he began his address. “Looking around, and all over this large, magnificent planet, the truth is plain to see: if you want freedom, take pride in your country. If you want democracy, hold on to your sovereignty. And if you want peace, love your nation.”

It was a view reflective of Trump’s long-held stance that places a greater weight on national identity than on trans-border ties. He said “wise leaders put the good of their own people and their own country first.”