A China-US trade deal will happen -- but not just yet, US President Donald Trump said.

"We’re not ready to make a deal," Trump said in Tokyo, before offering a glimmer of hope.

"I think we will have a deal with China sometime into the future," Trump added.

However, the US leader noted that US farmers were behind him -- despite evidence otherwise -- in his decision to raise tariffs on China.

"I don't believe that China can continue to pay these hundreds of billions of dollars in tariffs," Trump said. "I think that there's a very good chance that the US and China will have a very good trade deal."

When asked point blank if he was bothered by North Korean missile tests tests, US President Donald Trump replied simply: "I'm not. I personally am not."

"I'm not in a rush," he added. "Tremendous sanctions (are) being put on the country of North Korea."

Trump said he thinks Kim is "looking to create a nation that has great strength economically," but added that "with nuclear that's never going to happen."

"It's all waterfront property, it's a great location as we used to say in the real estate business."

The US will have trade deals with Japan and China in the future, US President Donald Trump said.

Trump added that the Chinese government was subsidizing a lot of industry -- and he didn't believe it could continue.

"Businesses are leaving China, by the hundreds, by the thousands," he said, adding that businesses would come to the US to avoid paying tariffs.

Japan and the US are planning to collaborate on space missions sending astronauts to the Moon and Mars, US President Donald Trump said after bilateral talks Monday.

As well as joining forces on human space travel, Trump said the two countries wanted to improve their economic relationship, adding that they were working on a bilateral trade agreement.

He said they hoped to announce more on trade "very, very soon."

Trump said the trip had been a chance for him to strengthen his friendship with Abe. He also discussed the sumo tournament he went to Sunday.

"I've always wanted to see a sumo tournament, and they are bigger and stronger than I ever thought," Trump said.

Abe said that he was "completely on the same page" as the US leader on the issue of Japanese people who had been abducted by North Korea. The Japanese Prime Minister said he planned to have a discussion in "complete candor" with North Korean leader Kim Jong-un about this in the future.

The US and Japan will work together to maintain a free and open Indo-Pacific, Abe said.

"Going forward we will work hand in hand," he said.

"I will continue to collaborate closely with President Trump," he said.

US President Donald Trump promised to bring home abducted Japanese citizens from North Korea, while meeting with relatives of some of the abductees in Tokyo.

The US leader met with the families of Japanese abductees after lunching with Shinzo Abe, telling them that he'll work with the Japanese Prime Minister to bring their loved ones home.

"We will be working together to bring your relatives home," Trump told the families.

"He loves this country, he loves you," he said of Abe.

Trump said their stories were "very sad" and noted that he was hearing some of their accounts for the second time. "I can see why your great Prime Minister feels so strongly about it," he said.

"I can also tell you for certain that it is the Prime Minister's primary goal," Trump said, adding that Abe has discussed the topic at every meeting they have had.

According to a 2014 report by the United Nations Human Rights Council, hundreds of South Koreans, Japanese and other foreign nationals were kidnapped by North Korea at the end of the Korean War in 1953.

Tokyo's Foreign Ministry regards the abductions as "a critical issue concerning the sovereignty of Japan and the lives and safety of Japanese citizens" -- and one that precludes any normalization of relations with Pyongyang until it is resolved.

Some of the family members held framed pictures of their relatives in their lap Monday as they thanked President Trump for taking an interest in the issue.

Earlier in the day, US President Donald Trump and Japan's new Emperor Naruhito swapped gifts -- including signed, framed pictures of themselves.

Trump gave Emperor Naruhito a vintage 1938 viola along with the photograph, while Melania Trump gave empress Masako a White House desk set and a signed, framed photo of herself, according to White House deputy press secretary Judd Deere.

The Emperor and empress returned the favor, giving the President and first lady signed, framed photos of themselves, too.

It's a long-standing tradition of the Imperial Palace that the Emperor and empress exchange signed, framed photos during a state visit.

Before heading into the meeting, Trump answered a question about Japan's close relationship with Iran.

"I know for a fact that the Prime Minster is very close with the leadership of Iran and we’ll see what happens," he said. "Nobody wants to see terrible things happen, especially me."

Trump recently announced that his administration would send 1,500 troops to the Middle East amid rising tensions between the two regions.

Japan and Iran have close ties. Japan has a longstanding relationship with Iran and was opposed to the US pulling out of the Iran nuclear deal that was negotiated by former President Barack Obama. 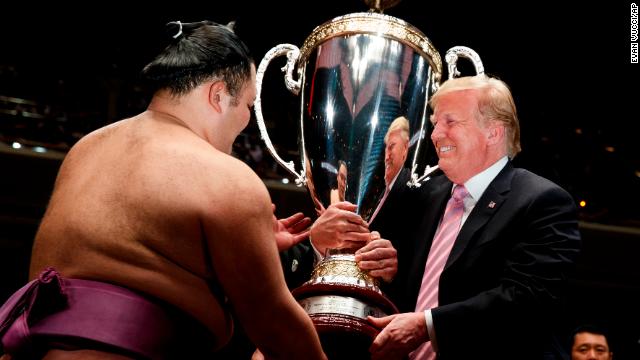 Trump made brief remarks before handing the 4.5 foot trophy over to the winner.

Trump said the cup was in honor of Asanoyama's "outstanding achievement" at the sumo grand championship.

Trump also shared photos of the event in a tweet.

"Tonight in Tokyo, Japan at the Ryōgoku Kokugikan Stadium, it was my great honor to present the first-ever U.S. President’s Cup to Sumo Grand Champion Asanoyama. Congratulations! A great time had by all, thank you AbeShinzo!!" the tweet reads.

When asked how it felt to be awarded the Cup, Asanoyama said "I was overjoyed, almost too much to say in words."

Asanoyama had clinched the championship on Saturday, but still competed in front of Trump and Japanese Prime Minister Shinzo Abe.

"To win a tournament just over three years after reaching the highest division is a great accomplishment, it’s a huge shock, its something you don’t normally see," Gunning said.

"He’s the kind of guy who will probably never win another tournament. But he’s also the first winner of the new imperial era," Gunning said.