Our live coverage has ended. Read more about the 2020 election here.

Election Day is only 18 days away. The CNN Poll of Polls tracks the national average in the race for president between President Trump and Democratic presidential nominee Joe Biden.

The poll of polls includes the most recent national telephone polls which meet CNN’s standards for reporting and which measure the views of registered or likely voters.

The poll of polls does not have a margin of sampling error.

Here's the latest polling average as of today: 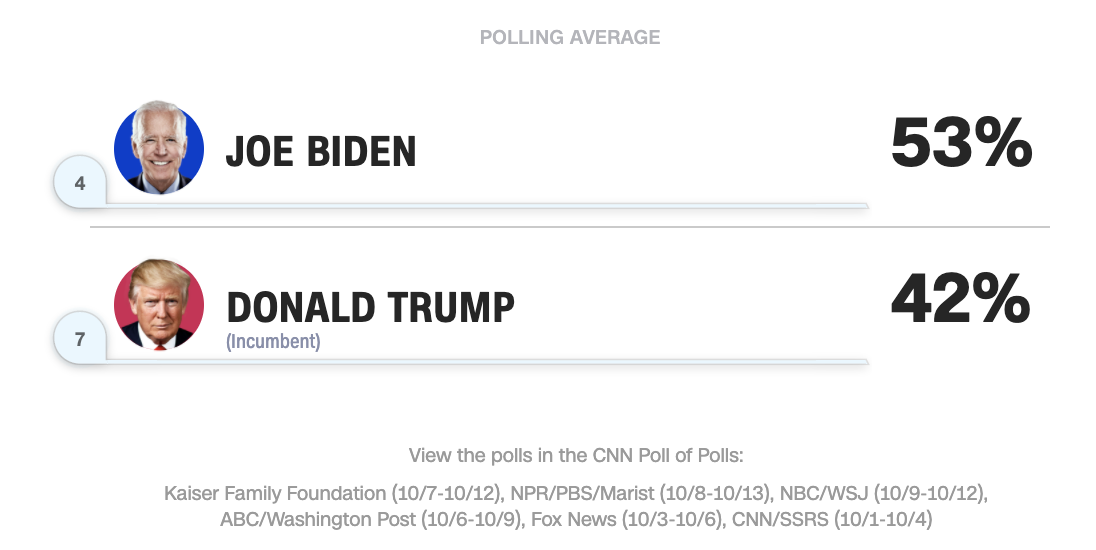 More than 17 million ballots across 44 states and DC have already been cast in the 2020 election. It's a stunning testament to what could be a historically high voter turnout, fueled by a series of state law changes that allow more mail-in balloting with the coronavirus pandemic still gripping the country.

The state-by-state totals are massively over-running where the early vote was in the 2016 presidential race.

Here are a handful of vote comparisons in swing states, per CNN's political unit:

(Note: This voting information comes from CNN, Edison Research and Catalist – a data company that provides data, analytics and other services to Democrats, academics and non-profit issue advocacy organizations.)

In fact, in ALL of 2016, just over 46 million votes were cast early — whether in person or by mail. That means that, even though we are still 19 days from the election, more than one-third (37%) as many early votes have already been cast in 2020 as were cast in the entirety of the early voting in the 2016 presidential race.

These soaring numbers are backed up by what we are seeing in the states. On Monday in Georgia —the first day of in-person early voting — some people waited in lines for as long as 11 hours to cast their ballot. In Texas on Tuesday, its first day of in-person early voting, thousands waited in long lines to have their voice heard. Early in-person voting begins in North Carolina on Thursday

The Democratic push to turn Georgia blue in November – and beyond — is getting another boost today with the launch of a new progressive super PAC planning to spend $2.5 million to boost turnout among young, minority voters.

Recent polling out of the state, which hasn’t gone for a Democratic presidential candidate since Bill Clinton in 1992, shows former Vice President Joe Biden in a neck-and-neck race with President Trump. Georgia’s two US Senate seats, currently held by Republicans, are also on the ballot and facing tough Democratic challenges. (Both of those races could be headed toward January 2021 run-offs.)

“For decades, Georgia has been counted out and seen as unattainable for progressives,” Ryan Brown, who will lead New South Super PAC, said in a statement. “But the tide is changing and progressives have a very real chance at winning up and down the ballot if we speak to and invest in the right voters.”

There is a rush of Democratic money coming into Georgia right now as the presidential and Senate polls tighten, but Brown said his group planned to be in it for the long haul – as Democrats try to secure and expand on their gains.

“In Georgia, two Senate races are up for grabs, we have the opportunity to clinch the election for Biden and Harris, and we can flip the state house heading into the crucial redistricting,” Brown said. “Both the stakes and the possibilities of the Georgia elections this year warrant our attention and this large-scale investment.”

The 2020 contests follow a 2018 gubernatorial race that saw Republican Gov. Brian Kemp scratch out a narrow victory over Democrat Stacey Abrams, who fell short by a little more than 50,000 votes in a campaign marred by allegations of voter suppression.

But Abrams emerged as a national Democratic star and the party — in a state where Trump’s approval ratings are routinely split — is now working to forge a coalition comprising liberal-leaning low-propensity voters, its moderate base and disaffected Republicans.

The early voting numbers out of Georgia this week suggest the 2020 contests will not suffer for a lack of enthusiasm. More than 126,000 ballots were cast on Monday, the first day of early voting, up from about 91,000 on the same occasion in 2016.

Senior adviser to the Biden campaign, Symone Sanders, told CNN the former Vice President “intends to show up to the debate if there will be one.” At the moment, Joe Biden and President Trump are set to debate next Thursday.

“It is up to the Cleveland Clinic and the Commission on Presidential Debates to let us know what is going on,” she added. “We're going to abide to the guidelines that they set out, and it is on the Cleveland Clinic to ensure that the safety precautions are being adhered to. So, we expect them to do their jobs and Joe Biden is going to do his.”

In an ABC town hall last night Biden said he will demand President Trump take a Covid-19 test, and for that test to return negative, before he will participate in a debate.

"Will you demand that President Trump take a test that day and that it be negative before you debate?" ABC’s George Stephanopoulos asked.

"Yeah," Biden replied, "By the way, before I came up here, I took another test, I've been taking it every day.”

President Trump's campaign and the Republican National Committee announced a joint fundraising haul of $247.8 million in the month of September — up from the $210 million the GOP raised in August, but far behind the massive total raised by former Vice President Joe Biden and Democrats in the final stretch of the campaign.

By comparison, Hillary Clinton raised $154 million in September of 2016.

Trump's campaign has been raising and spending money at a historic clip, but Biden and the Democrats quickly turned the tables in August after the Democratic convention and the selection of California Sen. Kamala Harris as Biden's running mate.

In addition to raising significantly more money in both August and September, the Biden campaign also has more money in the bank to spend in the final month of race. The Trump campaign will report $251.4 million cash on hand, while Biden has $432 million.

Despite the $180 million disadvantage, the Trump campaign said it is confident they will have enough resources to sustain the effort to reelect the President. 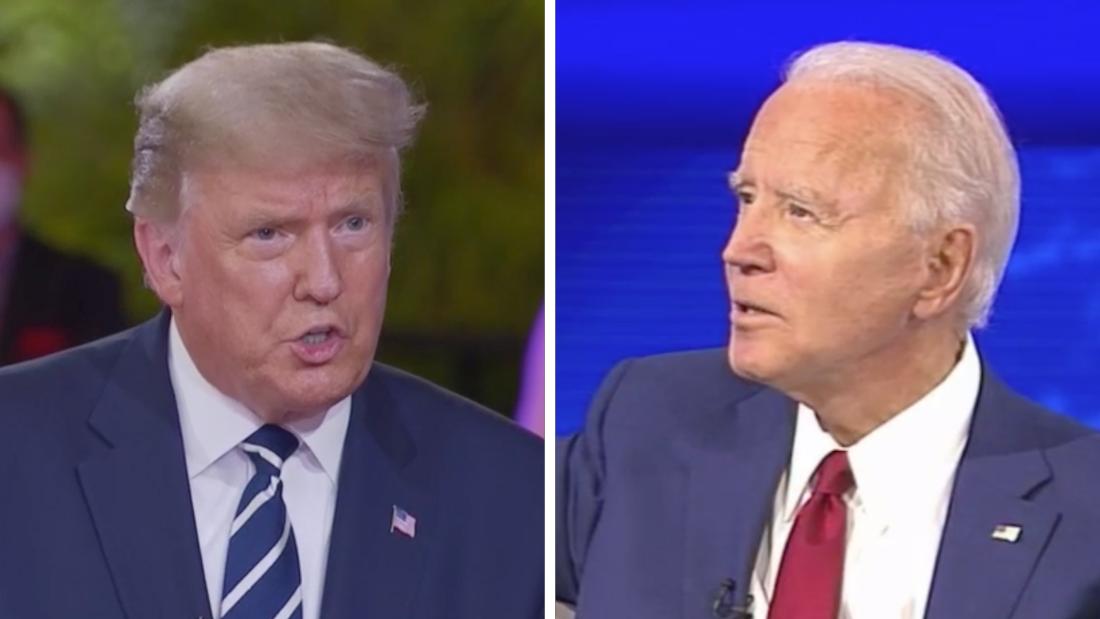 On ABC, Democratic presidential nominee Joe Biden was explaining his plan to raise taxes on people making more than $400,000 per year. On NBC, President Donald Trump was equivocating about the existence of a satanic cult of pedophiles.

The problem with their town halls, which were drastically different in tone and substance: Americans could only pick one to watch.

Here are some key takeaways from the dueling town halls:

With the second presidential debate scrapped in the wake of Trump's coronavirus diagnosis, the two candidates instead agreed to nationally televised town halls, with Biden taking questions from voters in Philadelphia and Trump doing so in Miami.

The two are scheduled to debate just one more time before Election Day.