Twelve of CNN’s most competitively ranked states are among these states that have exceeded their total 2016 pre-election ballots cast.

On Sunday, the nation surpassed the 58.3 million total pre-election votes cast in 2016.

Texas, where more than 7.3 million voters have already cast ballots this year, is closest to reaching its total turnout from 2016. The Lonestar State’s pre-election turnout is currently almost 82% of the state’s total votes from 2016.

Detailed voter information comes from Catalist, a company that provides data, analytics and other services to Democrats, academics and nonprofit issue-advocacy organizations and is giving insights into who is voting before November.

Here is a look at 2020 pre-election votes cast so far by state: 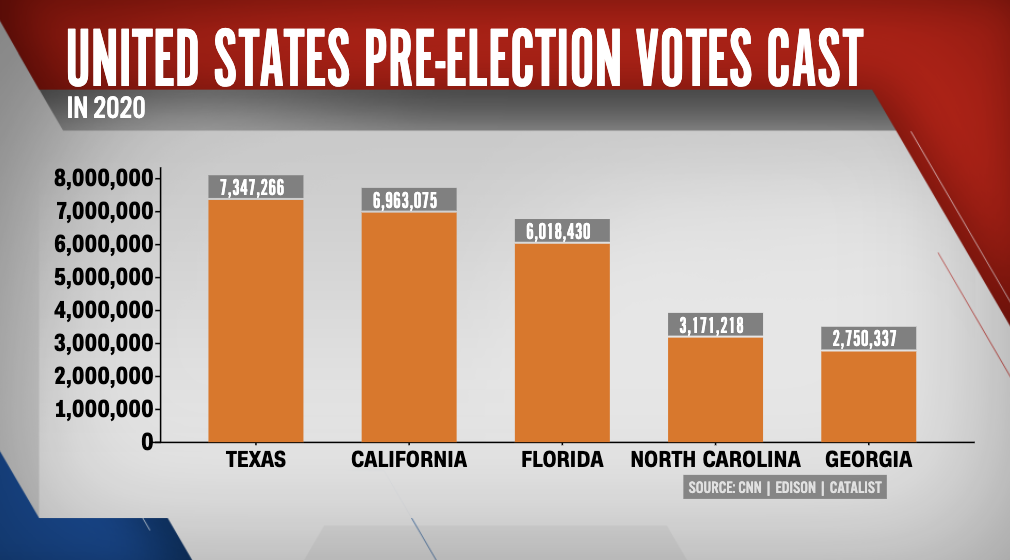 More than 7.3 million people have cast their vote in Texas, including the first 13 days of early voting, according to data posted on the Texas Secretary of State website Monday morning.

The last day of early voting in Texas is Friday.

There is concern in the Trump campaign after White House chief of staff Mark Meadows, in a stunning exchange with CNN’s Jake Tapper, said Sunday “We are not going to control the pandemic.”

A Trump campaign adviser said there is widespread frustration with Meadows over his comments.

“Everyone was clear that Meadows sh** the bed again,” the adviser said.

While Trump has dismissed rumors he’s planning to get rid of Meadows in a potential second term, he remains displeased with how his chief of staff handled the crisis surrounding his own bout with coronavirus, including telling reporters at Walter Reed the president’s symptoms were worrying as he was recovering from coronavirus. Even a few weeks later Trump remains upset that information was disclosed.

“Every time we build some momentum, Meadows f***s it up with an interview,” the adviser added.

The White House did not respond to CNN’s request for comment, but pressed on his own comments and subsequent criticism from the Biden campaign during a gaggle with on Monday morning, Meadows repeated himself.

“The only person waving a white flag, along with a white mask, is Joe Biden. I mean when we look at this, we're going to defeat the virus. We're not going to control it. We will try to contain it as best we can,” he said.

A separate adviser said it’s probably best that Meadows not do TV between now and the election, though Meadows suggested he would be making appearances on CBS and ABC’s morning shows on Tuesday.

The unforced error, made just nine days before the election, comes as Meadows has made it known among staffers that positive Covid-19 tests shouldn’t be disclosed publicly in the interest of avoiding the appearance of unmanaged contagion.

That strategy has mostly failed as the cases became public anyway through leaks.

The inability to keep a lid on things reflects Meadows’ diminished standing inside the building, according to multiple officials.

Many others in the building believe Meadows failed to communicate properly with staffers about the extent of the West Wing outbreak, leaving officials to glean for themselves who might be infected and whether they should quarantine. While Meadows has said he was doing so in the interest of privacy, the lack of guidance for days — while Meadows himself was spending nights with Trump at Walter Reed — angered many people.

President Trump is en route to Andrews Air Force Base for a three-stop blitz of battleground Pennsylvania on Monday.

Trump, sans mask, walked out of the White House at 9:29 a.m. ET, followed by an unidentified aide in a mask.

The President is scheduled to hold three campaign rallies today in Pennsylvania: one at 11 a.m. ET in Allentown, one at 1:30 p.m. ET in Lititz and one at 4:30 p.m. ET in Martinsburg.

Pence said on Friday that he would preside over the Senate’s vote to confirm Judge Amy Coney Barrett to the Supreme Court today, though White House Chief of Staff Mark Meadows cast some doubt on the plan this morning, saying it was "in flux," but that he didn't know if Pence would go to Capitol Hill.

Top Senate Democrats, including Senate Minority Leader Chuck Schumer and Democratic whip Dick Durbin, sent a letter to Vice President Mike Pence on Sunday demanding he reconsider his plan to preside over the Senate's vote to confirm Judge Amy Coney Barrett to the Supreme Court, saying it is "not a risk worth taking."

As of Monday morning, the Vice President's plans are unclear.

Pence said on Friday he would preside over the vote and White House Director of Strategic Communications Alyssa Farah confirmed this Monday morning. Not long after that, White House Chief of Staff Mark Meadows cast some doubt on the plan, saying it was "in flux," but that he didn't know if Pence would go to Capitol Hill.

Mike Pence and second lady Karen Pence each tested negative for coronavirus on Monday morning, his office said. Despite contact with multiple people who recently tested positive, Pence is refusing to quarantine in defiance of the US Centers for Disease Control and Prevention guidelines.

The release said that the senator was tested “after learning that two of her DC Senate staffers had tested positive.”

The release added that Loeffler is still planning on participating in the confirmation vote for Supreme Court nominee Amy Coney Barrett on Monday before returning to Georgia.

It is unclear if contact tracing is underway with the staffers or if anyone else in the DC office has tested positive.

Loeffler was asked Sunday if she had “close contact” with her aides who tested positive for coronavirus.

“Not at all,” she replied. She did not provide any further details.

Pre-Election Day voting is skyrocketing nationwide amid the ongoing coronavirus pandemic, and states are reporting record-breaking turnout as voters are energized to vote by mail or early in person before November.

Below is a look at the skyrocketing turnout in several key states that President Trump won by the narrowest of margins in 2016:

Florida: Trump won Florida by a little over one percentage point in 2016 and capturing the Sunshine State again this year is critical to his reelection prospects.

While Florida Democrats maintain an advantage in pre-election turnout, Catalist data shows the gap narrowing as more voters participate in early voting across the state.

Democrats now account for 43% of those early votes, while Republicans account for 36%. At this point in 2016, Republicans held a razor thin, approximately one-point lead in pre-election turnout.

This high turnout among Florida Democrats is reflected in recent polling about voter behavior in the Sunshine State.

This is not predictive of ultimate outcome, however, as polling shows Democrats nationwide are more likely to cast their ballots before Election Day than Republicans.

North Carolina: North Carolina Democrats are also outpacing Republicans in their percentage of the pre-election votes, but once again, that margin is narrowing amid a surge in early voting in the Tar Heel State.

About 40% of the early votes that Catalist has analyzed comes from Democrats compared to 30% from Republicans so far. This is similar to the partisan breakdown of pre-election day votes at this point in 2016.

However, Republicans have narrowed the gap in their share of the early vote in recent weeks.

Pennsylvania: In Pennsylvania — a key state that Trump won by less than one percentage point in 2016 — Democrats continue to hold a significant advantage over Republicans in their share of ballots already cast, according to Catalist party data.

About 70% of pre-election votes have come from Democrats so far, compared to about 20% from Republicans.

Turnout in the Wolverine State this century peaked in 2008 with more than 5 million votes cast for president. A 2018 ballot measure changed Michigan's rules to allow anyone to vote by mail without an excuse, and ballot returns this year are more than triple what they were at this time four years ago, according to Catalist data.

A look at those returns by race shows ballots from Black voters make up 12% of the current vote, up from 8% at this time in the 2016 cycle. Democrats are hoping to increase turnout among Black voters in areas like Detroit in their quest to bring Michigan back into the blue column.

There have been 3,171,202 early ballots accepted in North Carolina, according to the state Board of Elections. This means roughly 43% of all registered North Carolina voters have already cast a ballot.

With eight days until Election Day (and six days left in the early in-person voting period), the state has now exceeded the total number of early votes cast in 2016, which was 3,102,093.

Tomorrow is the last day a voter can request an absentee ballot in North Carolina. Early in-person voting runs through Saturday.