It's the day before Election Day

Democratic nominee Joe Biden exited his SUV in at 10:14 a.m. ET and immediately signaled to the pool with his finger before audibly saying that there’s “one day” left until Election Day.

He then boarded his flight in Wilmington, Delaware, waved and held up one finger from the top of the staircase.

Prior to his boarding, a number of Biden’s grandchildren were spotted boarding the plane. Grandkids traveling with Biden today are Hunter, Natalie, Naomi and Maisy, according to the campaign.

Flight time is one hour to Cleveland, Ohio, for his first campaign stop of the day.

From pool traveling with Biden

About 127,000 ballots already cast are at stake after a group of Republicans filed a petition seeking to halt drive-thru voting in Harris County, Texas, and block ballots that were cast during early voting from being tabulated until the court issues an order.

“We followed Texas election code to the T. We [consulted] with the Texas secretary of state in setting up drive-through voting, and our plans are public for many months. Now, more than 100,000 Texans have cast their ballots in this way. This is completely legal,” said Harris County clerk Chris Hollins who has defended drive-thru voting.

Some background: A federal judge set a hearing for Monday morning to hear the challenge, in what marks another attempt to dismantle drive-thru voting after the Texas Supreme Court ruled earlier that it could proceed.

Hollins explained what the drive-thru voting setup is like.

“We were allowed to have polling places inside buildings and inside movable structures, and that's what set up. These are large tent structures that you can drive into and cast your ballot,” he told CNN. “You cast your ballot on machines in the exact same way that folks who walk in to other voting centers do. It's completely legal.”

However, if the court rules against counting these drive-thru ballots, Hollins says officials are “prepared to marshall all county resources, including emergency response technology, to reach out to all 127,000 of potentially affected voters.”

“We do have tomorrow Election Day and we’re going to do whatever we can to get them out there and make sure that their voices are heard and that their votes are counted,” he added.

More than 95 million Americans have voted nationwide so far with one day left until Election Day, according to a survey of election officials by CNN, Edison Research, and Catalist.

Here's a breakdown of pre-election votes cast so far by state: 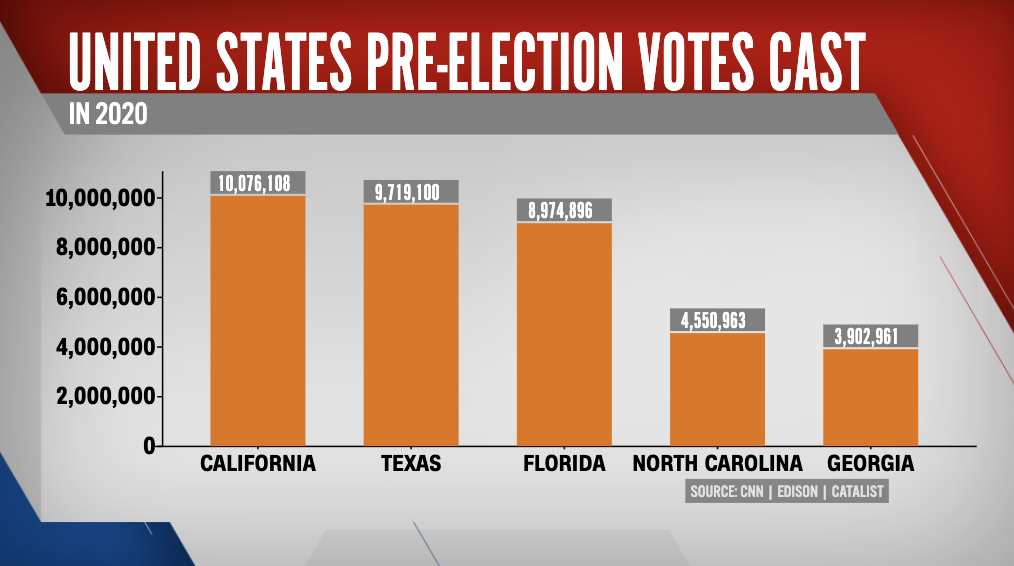 Wisconsin reached 62.8% of its 2016 general election turnout as the state wrapped up in-person early voting this weekend, new data released by the state Elections Commission on Monday showed.

Slightly more than a third of the early votes, 644,843, were cast in person, while the rest were cast by mail. There are still 174,507 absentee ballots in the state that have yet to be returned, although some of those voters may have decided to cancel their mailed ballots and vote early in person instead.

In-person early voting finished Sunday in the state’s largest cities, Milwaukee and Madison, while most of the state’s smaller municipalities had already stopped early voting on Friday. All absentee ballots have to be delivered by 8 p.m. local time on Election Day.

Dane County, a Democratic stronghold that includes the state capital Madison, still leads the state in early turnout rates, with 63.6% of registered voters casting a ballot.

The GOP-heavy suburban Milwaukee counties of Ozaukee, Waukesha and Washington are at 63.1%, 62.9% and 58.4%, respectively. Milwaukee County, the state’s most populous, is at 56.4% of registered voters, and many rural counties are far lower, as low as 21.3%.

Wisconsin doesn’t have partisan voter registration so no party breakdown is available.

Twitter will apply a warning label to tweets by US political candidates, campaigns and other highly visible accounts that attempt to claim victory before official results have been declared, the company said Monday.

"Beginning on election night through the inauguration, we will label some Tweets that make claims about election results," Twitter said in a blog post. "We will be prioritizing the presidential election and other highly contested races where there may be significant issues with misleading information based on the below criteria."

In addition to US candidates and campaigns, the policy will apply to Twitter accounts with more than 100,000 followers.

It will also extend to tweets that are receiving a high level of engagement, which is defined as 25,000 or more likes or retweets.

Appearing again on Fox in her personal capacity as a Trump campaign adviser from Miami-Dade County on Monday morning, White House press secretary Kayleigh McEnany brushed off reports that President Trump is prepared to declare victory on Election Night if he is close to 270 electoral votes, even if large numbers of ballots have yet to be counted.

Asked if there has been talk about this, McEnany responded, "No. What that is is that is the Joe Biden crowd knowing that they are on the brink of defeat, making things up and peddling it in the press. This President is prepared to win resoundingly."

However a senior Trump campaign adviser told CNN's Jim Acosta Sunday, that the Trump campaign plans to be very aggressive on Election Night and is prepared to declare victory if the President is close to the 270 electoral votes needed to win reelection.

Pressed further on the campaign's strategy on handling the period of time when key states like Pennsylvania will continue to count ballots after Nov. 3, she said, "we believe that Americans deserve to know the victor of the election on Election Night," falsely claiming that this process would be "subject to fraud."

Per a CNN fact check, there is no requirement that the result of the election be announced on the night of Election Day and states. When we do know the winner that night, it is not because complete results have been tabulated by election authorities; it is because media outlets have used the available data to make a projection.

That’s about 94% of the total votes in the 2016 election, when about 9.6 million people voted in Florida. This also means that during Florida’s early voting period, about 62% of the state's registered voters, about 14.4 million, have already cast their votes through mail-in ballots and in-person voting.

This is up by about 13,000 since Sunday morning, which shows that for at least one day Democrats held off gains that Republicans have consistently made over the last two weeks through early in-person voting.

About 1.9 million people with no party affiliation have also voted already in Florida.

President Trump enjoys an "inherent level of popularity" in various parts of Pennsylvania, Lt. Gov. John Fetterman said, adding that it may not be fully captured in polls but "you have to take that seriously."

With a retweet of a Trump rally Sunday, the Pennsylvania state official urged voters to get their ballots in, saying the President is popular in the state regardless of what the polls say.

“The President has undertaken an unprecedented engagement of small county Pennsylvanians through a level of barn storming that I can't recall another candidate has done before,” he told CNN. “There's a lot that I don't think can be captured fully in polling.”

"It's a message to my fellow Democrats," he added Monday. "You shouldn't be sitting on your mail-in ballots at all. There's no reason to. You don't use the mail, at this point it's too close to the deadline. You need to deliver it to a secure dropbox and make sure you bank your vote.”

Fetterman also emphasized that voters must drop off their ballots or vote in person Tuesday instead of mailing it.

“You just are risking having your vote potentially be nullified if you don't bank your mail-in ballot today.”

Beginning today, federal authorities are expected to put back into place a “non scalable” fence around the entire perimeter of the White House, the same type of fencing that was put up during the protests this past summer, a source with knowledge of the matter confirmed to CNN.

The fence, as it did this summer, will also encompass the Ellipse and Lafayette Square. The fence will go down 15th St. to Constitution Ave. and then over to 17th and then up to H St., across H by Lafayette and then come down 15th St, according to the source.

This move comes as law enforcement and other agencies are preparing for possible protests surrounding the election.

Many businesses in the downtown DC area in the proximity of the White House have boarded up doors and windows in the last couple of days in anticipation of possible protests.

During this past summer some businesses saw their windows smashed and other property damage by protesters.

NBC first reported the new fencing. The Secret Service did not respond to a request for comment.