It's the day before Election Day

Key unions in battleground states across the country are getting out the vote in the final days of the election.

In Pennsylvania, at least 500 laid off hospitality workers are canvassing in historically low turnout areas around Philadelphia on Monday and Tuesday to get out the vote. According to their union, Unite Here, members are knocking on 60 doors per minute, focusing on Black and Brown voters who are registered Democrats. The union endorsed Joe Biden in September.

“We are out here knocking for a change,” said Earlene Bly, Take Back 2020 Philly lead canvasser and former hotel room attendant. “We have a president in office who encourages division and spews hate. Change will not just happen because we want it to. We have to make it happen."

Hospitality workers around the country have been hit hard by the pandemic. Philadelphia lost half of its 77,000 hospitality jobs during the pandemic, where 70% of hotel workers are people of color.

Pennsylvania is a key battleground state, where every vote will count. President Trump flipped the state in 2016 by winning a slim margin of 44,000 votes.

“We need to get out and vote,” said Kat Payne, a furloughed hotel housekeeper. “As long as we are not voting or not getting involved, we're not going to get out of this [pandemic]. So let's use our vote and let it count.”

In Nevada, 500 hospitality workers are canvassing, mobilizing voters, and making phone calls to voters in Reno and Las Vegas over the next two days. Since August 1st, members from the Culinary Union 226 — the largest of its kind in the US — have knocked on over 450,000 doors. Fifty-four percent of union members are Latinx — a key voting bloc in the state.

“Donald Trump is a threat to the livelihoods of workers and our families,” said Geoconda Argüello-Kline, Secretary-Treasurer for the Culinary Union. “We are fighting to take back our country and we will deliver Nevada for Joe Biden and Kamala Harris. We know [they] will fight to protect Nevadans.”

The Culinary Union has 60,000 members and endorsed Joe Biden in September. Hillary Clinton won Nevada in the 2016 election.

The United Auto Workers union, based in the swing state of Michigan, is continuing with their GOTV efforts — but with new precautions during Covid-19. Through Election Day, instead of knocking on doors, members are making calls and texts from their homes or doing literature drops. The union, which says it has 400,000 members across the country, endorsed Joe Biden in April.

As in previous elections, the union negotiated Election Day off for its members so they can go vote. President Trump won Michigan in 2016 by less than 1% of the vote.

There are still 158,500 "Outstanding Absentee Ballots" in North Carolina, according to the NC State Board of Elections data, as of Nov. 2.

That same data shows that 1,360,754 individual voters requested an absentee by mail ballot and 939,690 mail ballots have been returned (either by mail or in-person at an early voting site or county board of elections).

Using that data, it appears 262,564 voters chose to cancel their absentee by mail ballot by voting in person during the early voting period, which ended Saturday in North Carolina. 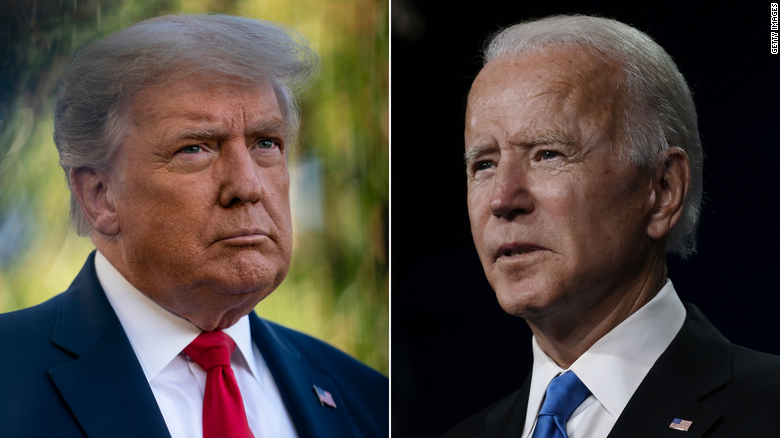 Tomorrow is Election Day in America, and a candidate needs 270 electoral college votes to win the election.

But is is possible that Joe Biden and President could Trump could tie? Absolutely.

What happens if they tie? There's a complicated process — learn about it here — but essentially, the House of Representatives elected on Tuesday would pick the winner. Each state would get a vote. Trump probably has an edge in a tie since Republicans control more state congressional delegations.

Georgia Secretary Of State Brad Raffensperger said at his news conference Monday morning that 3,915,147 early ballots have been cast across the state, a record 55% of active voters.

At least 2,689,692 ballots were cast at in person voting locations, and 1,225,455 voters have had their mail absentee ballots accepted by the counties.

Gabriel Sterling, Georgia’s voting system implementation manager. said that there have not been challenges to any absentee ballots so far.

“The system has worked really smoothly. The counties are really happy with the adjudication software they have that allows them to pull their canvassing teams in,” Sterling told CNN while speaking at their press conference in Atlanta. “It’s a lot better than the manual process we use to have.”

A GOP challenger was kicked out of the absentee ballot counting board center Monday in Detroit for not keeping her mask pulled up above her nose.

Robin Bozenski, 61, from Southgate, Michigan, told reporters that she couldn’t keep her mask above her nose because she has polyps in her nose that hinders her breathing, and had documentation from an ears, nose and throat doctor to prove it. Bozenski had her mask covering her mouth but not her nose.

“I have a medical reason” Bozenski shared with reporters after being removed from the absentee counting board where the processing of absentee ballots was underway.

Bozenski shared that at least seven poll workers approached her and asked her to cover her nose as she was making challenges before making an official complaint. Bozenski added that poll workers were also complaining that she was getting too close to them, but she said that was the only way she could see.

“I think it’s more pettiness in there than it is anything because I was doing some challenging and they didn’t like that.”

Describing the types of challenges she was making, Bozenski said, that she saw an instance where the numbers on the envelopes were not matching, meaning that the number on the envelope and the number scanned on the computer did not match. Bozenski also said that she challenged the weight of an envelope, thinking it was too heavy, but was told that type of challenge couldn’t be made until tomorrow when ballots get counted.

A lawyer with the Michigan Republican Party came up to Bozenski after she got kicked out to learn more about the situation. When Bozenski said she couldn’t cover her nose the lawyer, Nicholas Wittner, said she wouldn’t be allowed in even if she wore a face shield. Wittner then took down Bozenski’s notes on the challenges she made.

A coordinator for the poll challengers says a poll worker yelled at the masked man to get away from her before police showed up. This same coordinator says the man kept telling police “slavery is not over” as he was being escorted out.

Those that checked him in as a challenger said, outside of his mask, he was behaving relatively normally during the check in process.

The court found that if the machine was not used, the county would not be able to meet the canvas deadline.

The judge found that the Clark County Registrar has complied with state law requiring a plan for public viewing of the count.

No, there is not. In fact, it's happened in recent memory. Here is a breakdown of when CNN projected the last five presidential elections:

“We feel the momentum on the ground. The polls got it wrong last time and we think they're gonna get it wrong again. That silent majority that came out in full force, is strong once again for President Trump.” Farah said in an interview Monday on Fox.

Asked if the President’s massage about “rounding the turn” on coronavirus is helpful given the spike in cases, Farah said Trump is trying to convey that the US is now “in the best place to treat” those who might contract the virus.

“I don't want your viewers to think that that means we're through the thick of the virus but we are getting to a place, we are in the best place to treat it if you contract coronavirus now. We are within a month most likely of a vaccine that we can mass deploy. We’re in the best place to defeat the virus today,” Farah said. She added that the American people need hope after she misleadingly characterized Joe Biden’s plan to combat the virus earlier in the interview.

She spent most of the interview touting the President’s first term accomplishments.

It takes 270 electoral votes to win the 2020 presidential election.

You can build your own road to 270 with this tool. It'll start with a map of reliably red and blue states, as well as the battlegrounds CNN is tracking most closely.

You also can view CNN’s current race ratings or use the 2016 electoral map as a starting point. Clicking an individual state will change who is winning its electoral votes.