The second presidential debate was canceled after Trump objected to the virtual format announced by the Commission on Presidential Debates put forward following his positive coronavirus diagnosis.

Here are key things to know about tonight's events:

You can follow CNN for live coverage of both town halls. CNN.com will have live coverage, analysis and fact checking of the competing town halls all in one place.

More Americans are casting their ballots early than ever before. If that correlates with higher turnout overall — and polling suggests it will — it will be good for democracy.

The higher early voting could also, however, very much affect when we'll know the winner in key swing states and how soon the election could be called by the major news networks.

States have different deadlines for when absentee or mail ballots must be submitted and when they can be processed. Both of those factors can affect how long it will take for states to count their votes. 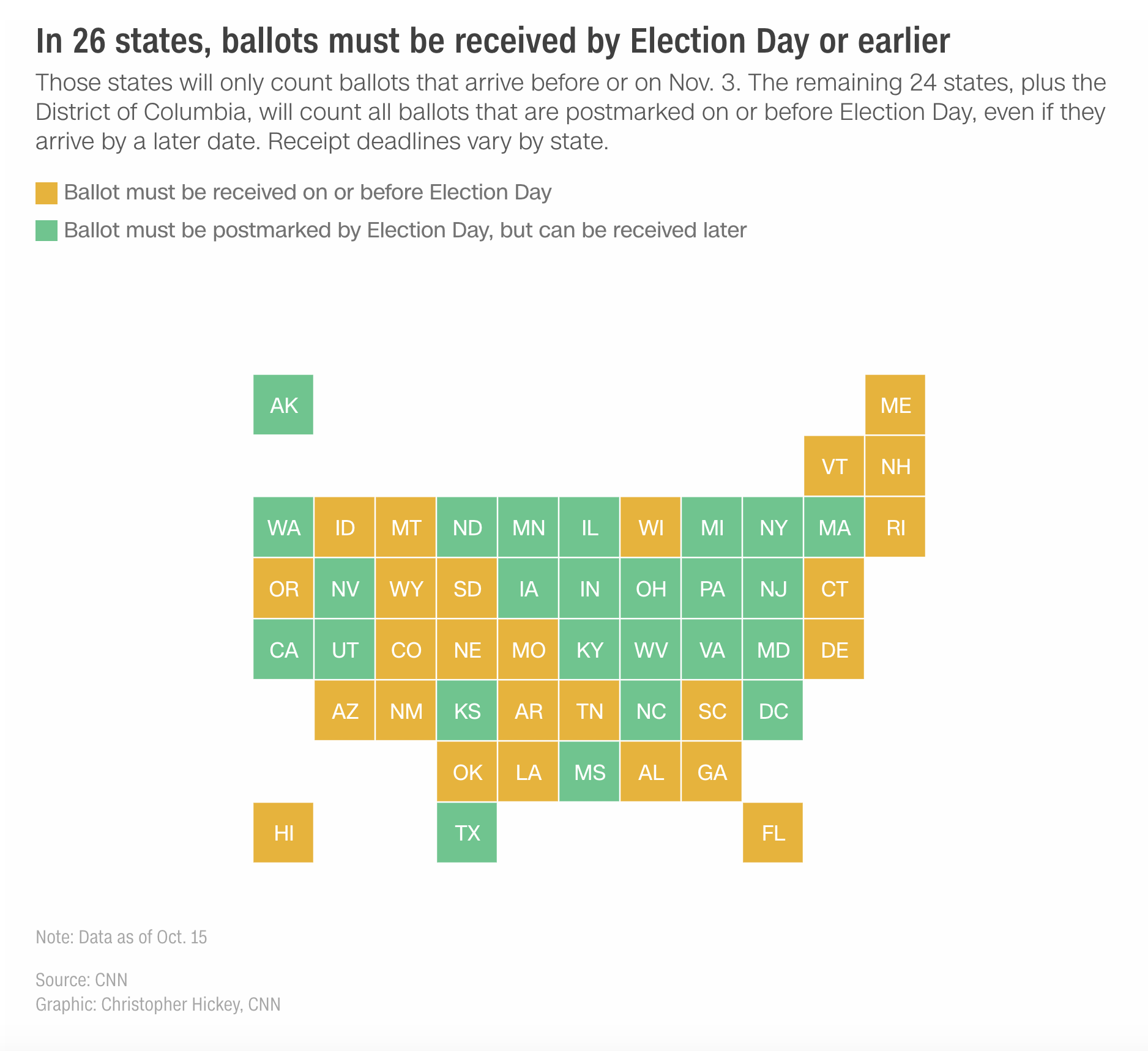 It's no different in the closest six swing states that President Trump won in 2016: Arizona, Florida, Michigan, North Carolina, Pennsylvania and Wisconsin. Former Vice President Joe Biden likely needs to win at least two, if not three, of these states to win the presidency.

Based upon the current laws and past trends, of these states, Florida's probably the one where I think with a reasonable degree of certainty we'll know who won on election night.

Why? It comes down to when mail ballots must be received and when they can be processed.

Of those six, the law currently states that most ballots must be received by Election Day in Arizona, Florida and Wisconsin.

While the lionshare of the mail votes in each of those states is likely to be submitted long before Election Day, some voters may very well wait it out. A recent Fox News poll in Pennsylvania found, for example, that 10% of likely voters said they'd be voting by mail and submitting their ballot on Election Day.

If the total ends up being that high and the election is close, it will be hard to know who has won in any of those three (Michigan, North Carolina or Pennsylvania) states without seeing the final votes.

"I got myself a little 13 inch over the air tv that I’ll be watching Trump on, and I’ll be following Biden’s town hall on my computer. Obviously, I can’t listen to both at the same time, so Trump will get sound and Biden will get subtitles. I'll of course have CNN's live story up on my computer watching it all come together in one place. The biggest thing in all honesty I’m looking for is how Trump handles questions about the coronavirus, and whether voters are as hostile to him as they were in his last town hall."

If you're looking for more ways to follow the town halls at 8 p.m. ET tonight, here's how:

Follow CNN for live coverage of both town halls. CNN.com will have live coverage, analysis and fact checking of the competing town halls all in one place.

The Biden town hall will air on ABC, and will stream on ABC News Live, which is available on Hulu, Roku, YouTube TV, Amazon Fire tablets and TV stick, Xumo, Sling TV, Facebook, Twitter, ABCNews.com and the ABC News and ABC mobile apps.

The Trump town hall will air on NBC and across MSNBC, CNBC, NBC News Now and Telemundo's digital platforms.

The election is only 19 days away, and tonight's competing town halls will be an opportunity for President Trump and Democratic presidential nominee Joe Biden to answer questions from voters.

The CNN Poll of Polls tracks the national average in the race for president between Trump and Biden. The poll of polls includes the most recent national telephone polls which meet

CNN’s standards for reporting and which measure the views of registered or likely voters. The poll of polls does not have a margin of sampling error.

As of today, this is where the candidates stand in head-to-head polling:

An administrative member of the aviation company that charters Joe Biden’s plane tested positive for Covid-19, according to campaign manager Jen O'Malley Dillon.

The campaign says that Biden was "not in close contact, as defined by the [Centers for Disease Control and Prevention], with this individual at any time" and that there is no need for Biden to quarantine.

According to the campaign, the person traveled on the plane during the former vice president’s trip to Ohio on Monday and Florida on Tuesday, and was stationed in the last row of the 737 aircraft — over 50 feet away from Biden — throughout all of the flights.

This distance is well beyond the standard two rows (in front and behind) of distance the CDC generally uses when conducting contact investigations on aircraft for infectious diseases.

Biden tweeted about the member of the company that charters his plane testing positive for Covid-19, saying the discovery was made during the campaign's contact tracing.

Biden reiterated that the individual was more than 50 feet away and noted as CNN reported earlier, that he was tested for Covid-19 on Wednesday night and it came back negative.

Democratic vice presidential nominee Kamala Harris and her husband Doug Emhoff underwent PCR testing for Covid-19 Thursday and Covid-19 was not detected, according to a Harris aide.

Some context: Earlier today the campaign announced that a Harris staffer, as well as non-staff flight crew member, tested positive for the virus. 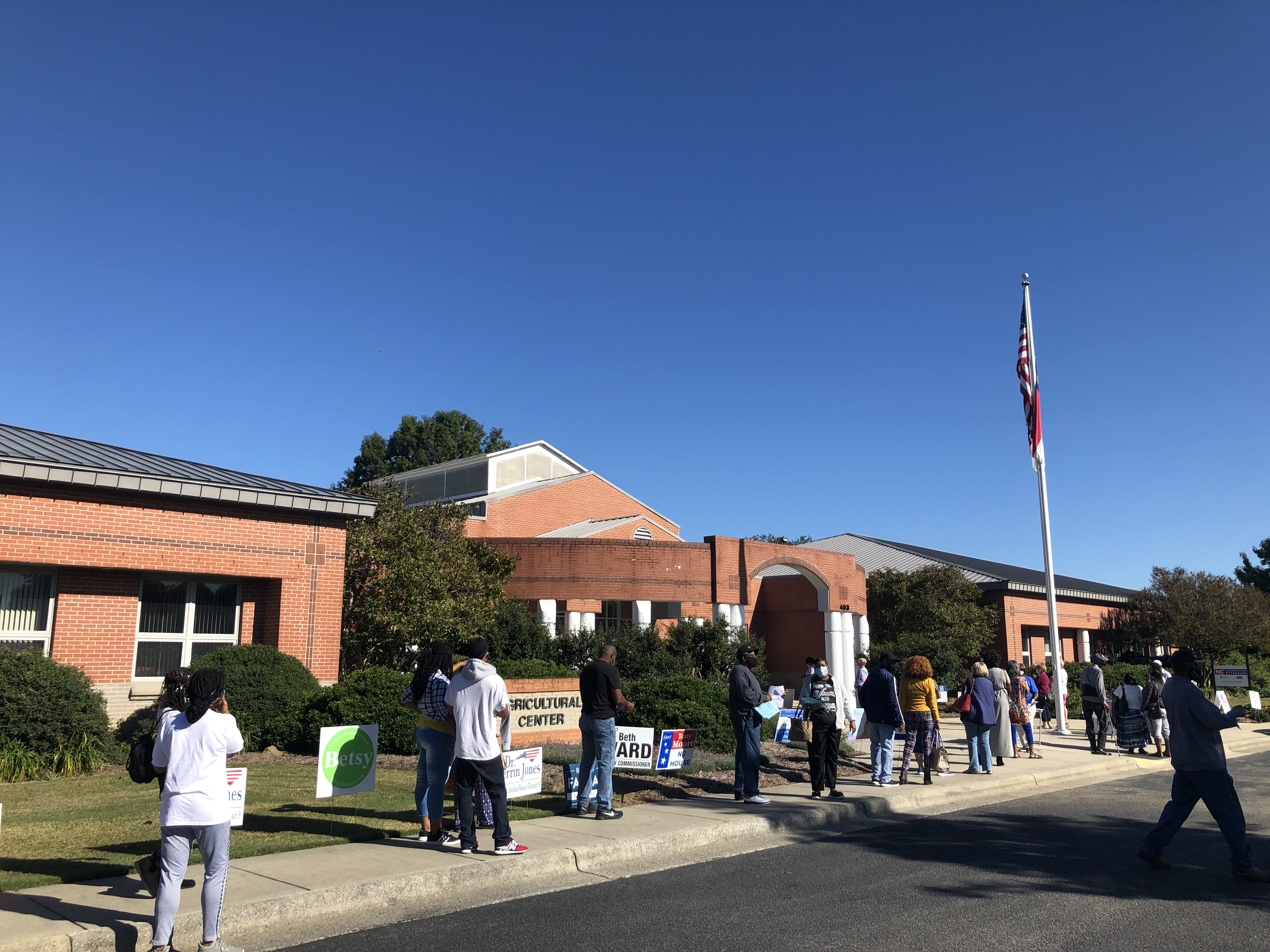 Greenville, North Carolina — Both Republicans and Democrats who lined up to vote here on Thursday said they decided to come out on the first day of early voting in North Carolina because they harbored serious misgivings about the safety of voting by mail.

The comments come as President Trump attempts to raise questions about the election because of the adoption of mail-in voting due to the coronavirus pandemic. Many of Trump’s comments about mail-in voting are almost entirely unfounded.

But those in line here in Greenville, just a mile from where Trump rallied with supporters, the skepticism crossed party lines.

“I thought it was very important to get out here and vote because I wasn’t sure about mail in voting,” said Teronica Felton from Pitt County. “Things get lost in the mail.”

Felton, a 38-year old Black woman who was voting for Democratic presidential nominee Joe Biden, said she had never voted by mail and wanted “to go with what I knew.”

The line continued to grow for much of the morning at the AG Center in Greenville. Some voters chose to get out of their cars to wait in line and vote in person, while others opted for a drive thru lane that allowed them to stay in their vehicles.

James Brown, a 57-year man who works in food services, declined to say who he planned to vote for, but did say his decision to stand in line on Thursday was motivated by doubts about mail-in voting.

“I don’t believe in mail-in ballots,” he said, adding that he worries that they will actually be counted.

Bernie and Elaine Pittman, two grandparents who are backing Trump, said that they put their concerns about the virus aside when coming to vote.

“A lot of it is that we have never done that before, so some of that is we are not comfortable with it. We are older and it is not what we are used to doing,” said Elaine Pittman, who was trying to count 6 feet between people in line. “It’s something psychological.”

CNN's got answers to your questions about voting  — and how Covid-19 is impacting the process. Read up here.

“As part of our regular routine of testing, Vice President Biden underwent PCR testing for COVID-19 last night and COVID-19 was not detected,” the Biden campaign said in a statement.

With 19 days until Election Day, more than 17 million ballots have already been cast in 44 states and the District of Columbia, according to survey of voting data from CNN, Edison Research and Catalist.

Almost 10 million of those votes come from the 16 states that CNN rates the most competitive in the presidential election.

Today is the first day of early voting in the critical state of North Carolina, but mail-in ballots started going out more than a month ago.

Here’s a look at who’s voted so far in the Tar Heel State, according to voting information provided by Catalist, a company that provides data, analytics and other services to Democrats, academics and nonprofit issue-advocacy organizations and is giving new insights into who is voting before November.

Democrats currently hold a wide advantage over Republicans in ballots returned, despite making up nearly 36% of registered voters compared to Republicans’ 30%. Half of North Carolina’s ballots so far have come from Democrats, and only 18% have come from Republicans.

This also marks a sharp difference compared to this point in 2016, when Republicans held a five-point lead over Democrats in their share of pre-election ballots cast.

This data does not predict the outcome of any race, as polling around the country shows Democrats prefer to vote early or by mail, and Republicans prefer to vote in-person on Election Day.

What we know: North Carolina’s voters so far are a more diverse group than they were at this point four years ago.

One piece of the early voting breakdown in North Carolina that hasn’t changed much from 2016? Gender.

Women make up about 56% of those who have already cast ballots. At this time four years ago, that number was 57%.