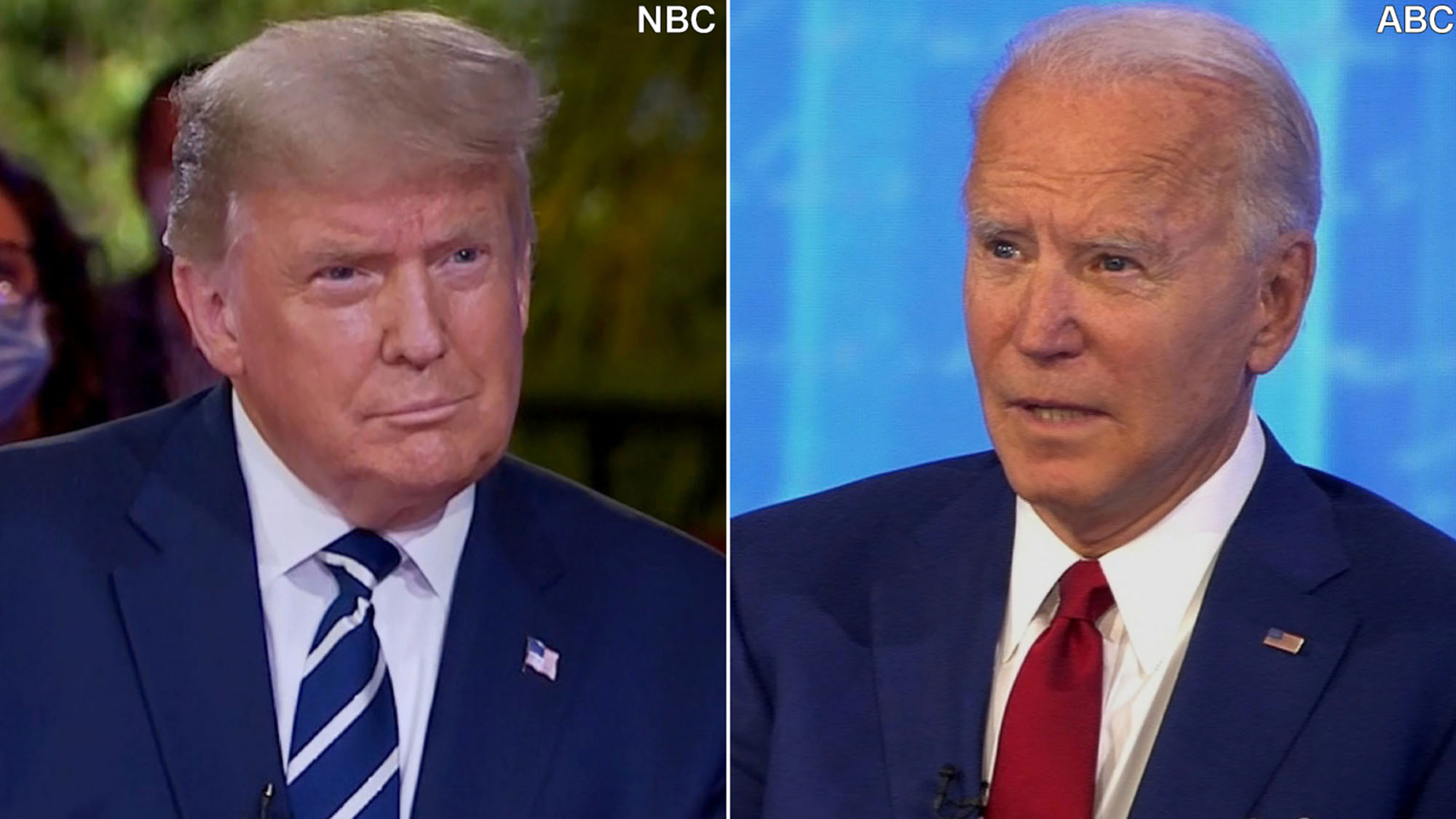 President Trump and former Vice President Joe Biden participated in competing presidential town halls tonight where they discussed a range of topics, including the coronavirus pandemic, nomination of a Supreme Court justice, the economy and Roe v. Wade.

If you missed both town halls, here are some key moments from each below:

Former Vice President Joe Biden said Thursday that if he loses the election, he hopes it doesn’t mean America is as divided “as it appears the President wants us to be.”

ABC’s George Stephanopoulos asked Biden what it would say to him about where America is today if he loses in November.

“Well it could say that I’m lousy candidate and I didn't do a good job,” Biden responded. “But I think, I hope that it doesn't say that we are as racially, ethnically and religiously at odds with one another as it appears the President wants us to be.”

Biden argued that while Trump has worked to divide the country, he would be a president for all Americans if elected in November.

The former vice president previously told a voter at the town hall that he would hopefully go back to being a professor at the University of Pennsylvania and working with the Biden School of Public Policy and Administration at the University of Delaware, “focusing on the same issues relating to what constitutes decency and honor in this country.” He said those issues are the reason he got involved in politics.

Biden quoted his father, who he said had an expression, “Everyone’s entitled to be treated with dignity."

"And so, whether I am a defeated candidate for president beck teaching or I am elected president, it is a major element of everything that I am about. Because it reflects who we are as a nation," Biden said.

Citing his efforts on criminal justice reform, President Trump said he has “done more for the African American community than any president with the exception of Abraham Lincoln,” noting that “a lot of people agree.”

Facts First: This is false.

President Lyndon B. Johnson, for example, signed the 1964 Civil Rights Act and the 1965 Voting Rights Act, monumental bills whose impact dwarfed the impact of any legislation Trump has signed.

It’s also worth mentioning that Black people themselves do not, on the whole, agree with Trump's self-assessment. Trump has had a consistently abysmal approval rating with Black citizens — just 4% in one recent Quinnipiac University poll, for example, versus 93% disapproval.

Democratic presidential nominee Joe Biden said Thursday that he will demand President Trump take a Covid-19 test, and for that test to return negative, before he will participate in a debate.

"Will you demand that President Trump take a test that day and that it be negative before you debate?" moderator George Stephanopoulos asked. "Yeah," Biden replied, "By the way, before I came up here, I took another test, I've been taking it every day, the deep test, you know, the one, they go in both. Because I wanted to be able to — if I had not passed that test, I didn't want to come here and not expose anybody."

Trump and Biden are set to debate next Thursday. The second presidential debate originally scheduled for today was canceled after Trump objected to the virtual format announced by the Commission on Presidential Debates put forward after his positive coronavirus diagnosis.

President Trump expanded on a false claim that he’s made previously, saying that “thousands of ballots” had been found in dumpsters.

“Thousands of them are dumped in dumpsters and when you see ballots with the name Trump — military ballots, from our great military, and they’re dumped in garbage cans,” the President said in the NBC town hall.

He went on to claim that the “thousands of ballots” were found with “my name on it.”

Facts First: This is false. There have been two incidents where ballots were found in a dumpster or trash can: 99 ballots heading to voters in New Jersey and nine ballots “incorrectly discarded” by a temporary worker in Pennsylvania.

In New Jersey, the Justice Department charged a mail worker with two felonies for tossing 1,875 pieces of mail that included 99 ballots in two dumpsters. The ballots, which were being sent to voters, were immediately delivered after the US Postal Service learned about them being tossed in the trash.

According to federal and local authorities, an election worker improperly threw out nine military ballots in Luzerne County. The Justice Department initially said all nine ballots were marked for Trump, then deleted its initial statement and issued a new one saying seven were Trump votes. Local officials said they would try to reach the affected voters and fix the ballots.

Former Vice President Joe Biden slammed President Trump for not helping the jobless after the $600 weekly supplement for unemployment benefits – which Congress passed as part of its $2 trillion relief package — lapsed in late July.

Facts first: This is false. The day after congressional talks to extend the federal boost to unemployment benefits collapsed, Trump signed an executive measure to use $44 billion in federal disaster aid to provide $300 a week to the jobless.

The effort provides out-of-work Americans in 49 states and the District of Columbia with these funds for up to six weeks. The money has already been fully distributed in many states.

Joe Biden on Thursday said he will reverse the Trump administration executive orders that a questioner described as “dangerous and discriminatory.”

Unfurling an old yarn, Biden told the story of seeing two men, “well-dressed,” kissing one another while he was with his father many years ago.

Biden then returned to the present day and declared, “There should be zero discrimination.”

“There is no reason to suggest that there should be any right denied to your daughter,” Biden said, “that your other daughter has a right to be and do. None. Zero.”

CNN's Dana Bash said Thursday that President Trump refusal to say if he was tested on the day for the first presidential debate is "not something you forget."

At Trump's town hall with NBC, he said he did not recall taking a coronavirus test before the first presidential debate with former Vice President Joe Biden.

Bash cited former New Jersey Gov. Chris Christie's statement about the severity of his coronavirus diagnosis and hospitalization and his call for Americans to take the pandemic seriously.

"The leaders of this country, meaning the President, even though he didn't say it, have to stop being so cavalier about this," Bash said. "And not getting a test and putting in danger the people who are in that room, including his opponent for the presidency is as cavalier and careless as it can be."

“Children are getting the virus, not with as serious consequences, but we haven’t, there's been no studies done yet on vaccines for children,” he said.

Facts first: Biden is correct about research in the US, though a leading drugmaker just this week revealed plans to include children in its vaccine research. Pfizer plans to start testing its experimental coronavirus vaccine in children as young as 12, the researcher helping lead the trial told CNN on Tuesday. It will be the first coronavirus vaccine trial to include children in the United States.