Our live coverage has ended. Scroll through the posts below to read more about President Trump's new sanctions on Iran or follow CNN.com. 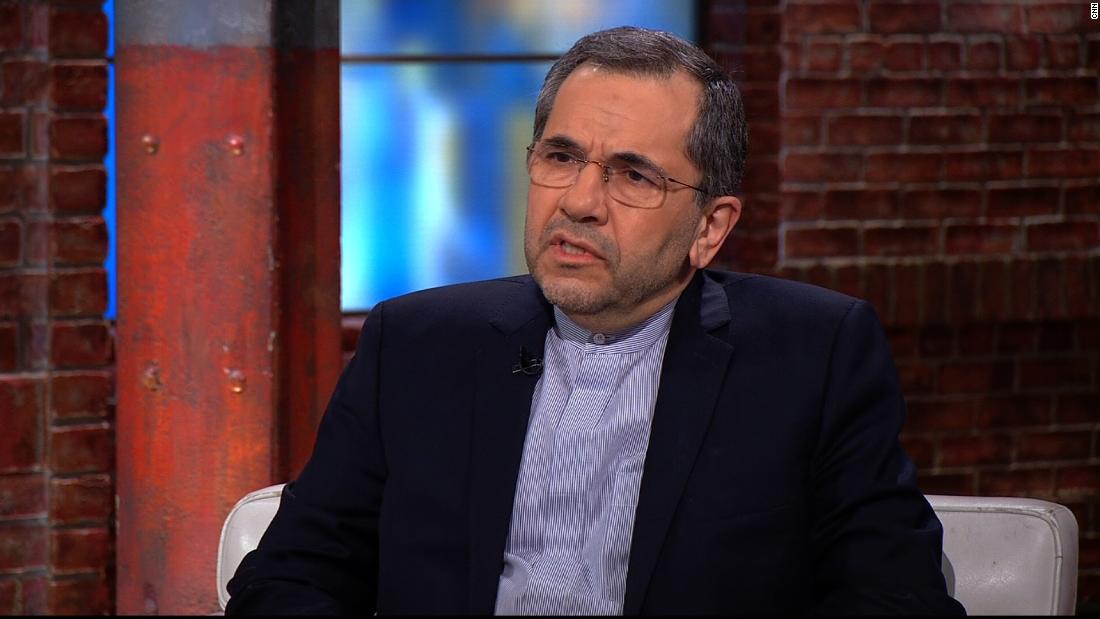 Iran's ambassador to the United Nations said today's actions by President Trump to impose new sanctions was "yet another indication of continued US hostility" against the country and its leaders.

"To ease tensions in the broader Persian Gulf region, the US must stop its military adventurism in our region, as well as its economic war and terrorism against the Iranian people," Majid Takht Ravanchi told reporters before a closed-door meeting of the UN Security Council.

Asked about Trump’s willingness to meet with Iran, Ravanchi said:

"We are not in the business in succumbing to pressure. The US has been applying pressure against Iran and today we witnessed that they have added more sanctions, so nobody in a clear mind can accept to have a dialogue with somebody that is threatening you with more sanctions. So as long as this threat is there, there is no way that Iran and the US can start a dialogue."

Cyber attacks against Iranian targets was one of the options presented to the White House by the Pentagon on Thursday as part of a series of proposed actions designed to retaliate against Iran for its downing of a US drone over the Strait of Hormuz, according to a US defense official.

The cyber attacks were part of a list of non-lethal/kinetic response options. Other options proposed included the previously reported strikes against missile and radar installations associated with the downing of the unmanned aircraft.

The official does not know whether the cyber response option was selected by the White House.

Separately, CNN reported on Saturday that US Cyber Command launched a retaliatory cyber strike last week against an Iranian spy group for the recent attacks on commercial ships, according to a US official and a former US intelligence official familiar with the matter.

The cyber strike targeted the spy group, which has ties to the Islamic Revolutionary Guard Corps, after Iran attacked ships in the region, the officials said. The US official added the online strike targeted an Iranian spy group's computer software that was used to track the tankers that were targeted in the Gulf of Oman on June 13.

Iranian Foreign Minister Mohammad Javad Zarif tweeted today for the first time since the US imposed new sanctions on the country.

Zarif said President Trump is "100% right that the US military has no business in the Persian Gulf."

The sanctions, imposed on Monday, will apply to Iran's Supreme Leader Ayatollah Ali Khamenei and his office.

Why this matters: This means that Mnuchin has the authority to impose sanctions on officials appointed by Khamenei and anyone who supports his office.

So far, the Trump administration said the sanctions will target senior commanders of the navy, aerospace, and ground forces of the Islamic Revolutionary Guard Corps (IRGC) — people who the Department of the Treasury said had a direct role in the tanker attacks in the Gulf of Oman, and the shooting down of a US drone.

These sanctions would deny officials access to the United States financial system and any assets in the US — blocking Iranian leadership from using many resources and making it harder for Khamenei to fund parts of the government.

In a statement, the White House said the sanctions are in response to "a series of provocative actions in the recent weeks, leading up to the attack on a United States drone operating over international waters."

According to the Trump administration, the sanctions are intended to push Iran to the negotiating table as well as to "send a clear message to the Iranian regime that it must end its malign behavior."

Here's more about the relationship between Trump and Iran's supreme leader:

President Trump said that the sanctions imposed on Iran were going to "happen anyway," regardless of the attack on a US drone last week.

Here's the exchange the President had with a reporter Monday after he signed the order:

Reporter: Just to be clear, is this the US response to the Iranians shooting down the drone?
Trump: This, you could probably, Steve, add that into it. Basically this is something that was going to happen anyway.

Moments later, Secretary of the Treasury Steve Mnuchin also added that Trump's order today was already "in the works."

"The executive order that the President signed was in the works previously," he said.

President Trump, while announcing new sanctions against Iran, said his executive order was a "proportion response" to Iran's recent actions.

“These measures represent a strong and proportionate response to Iran’s increasingly provocative actions. We will continue to increase pressure on Tehran until the regime abandons its dangerous activities and aspirations, including the pursuit of nuclear weapons, increased enrichment of uranium, development of ballistic missiles, engagement in and support for or terrorism, fueling of foreign conflicts and belligerent acts directed against the United States and its allies.”

Trump added: “Never can Iran have a nuclear weapon." 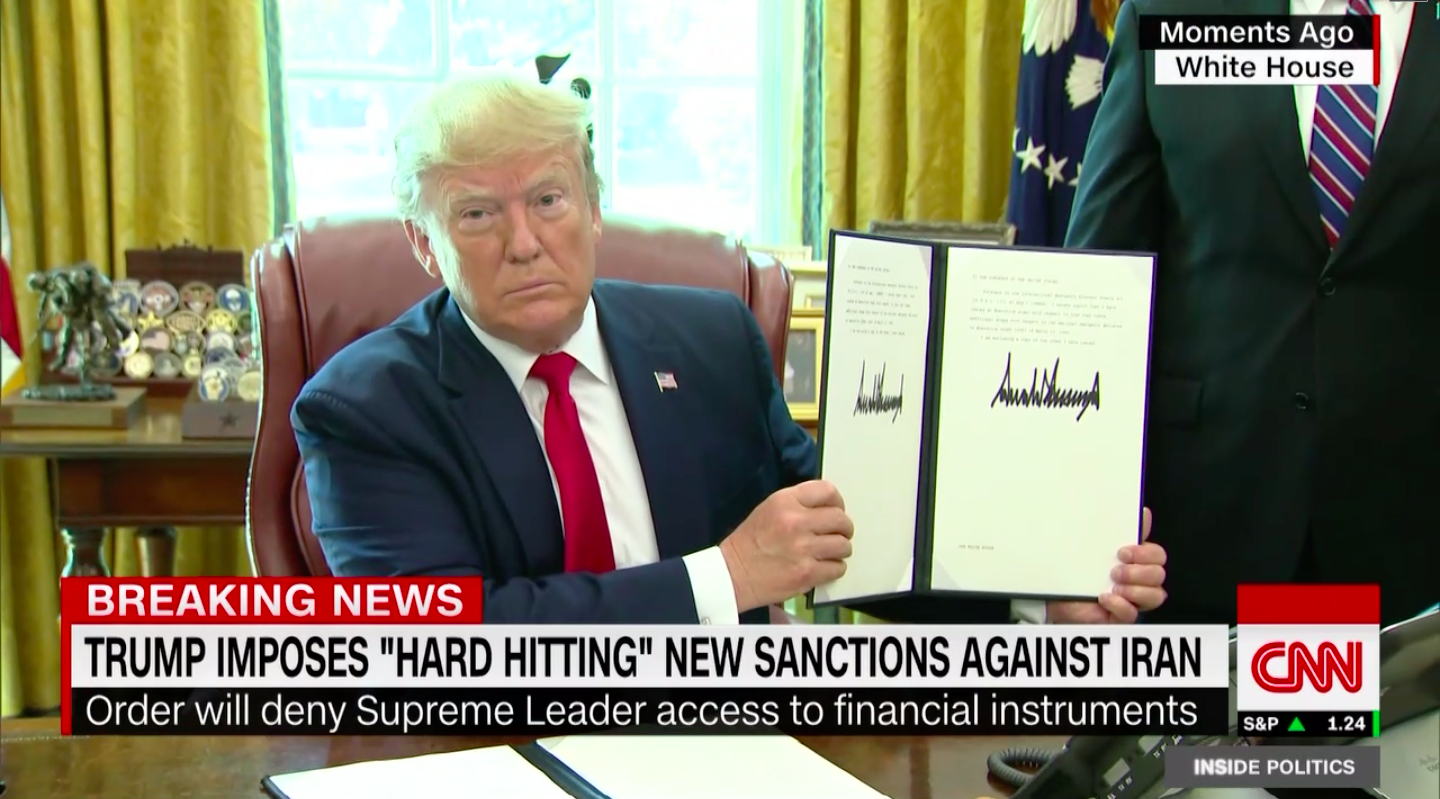 President Trump said he is signing an executive order in a few minutes imposing “hard hitting” sanction on Iran. The order will deny Supreme Leader and others access to financial instruments.

“We will continue to increase pressure on Tehran,” Trump said. “Never can Iran have a nuclear weapon.”

Trump made the announcement at the White House. Vice President Pence was over his left shoulder.

Iran's Foreign Minister Mohammad Javad Zarif is praising Iran for shooting down a US drone. He also is denying the claim that the drone was shot by a Russian-made air defense system.

“I am not an expert in this field but the weapon system used (to shoot down the American drone) was manufactured by Iranians which is a source of great pride for the Iranian nation,” Zarif said according to a report by Iranian state-run news IRNA, Monday.

Zarif called the attack a courageous technical feat in defense of Iran’s sovereignty.

He added: ”Our sovereignty is not up for discussion. Violators of lran’s borders will always face the reaction of the Iranian nation and its armed forces.”

He said Iran sent a letter to the UN Secretary General the day of the “encroachment of the US drone into Iranian territory” complaining about the American aggression, IRNA reports.

He added that in the letter Iran had requested international action to prevent “this kind of dangerous American behavior which has caused regional tension and threatens the borders of regional countries and their sovereignty and authority.”

Zarif also said that Iran is going to attend the UN Security Council’s meeting (to present Iran’s case) and will continue its exchange of views with other countries to “shed light on the continuation and the addiction of the United States to break international rules and regulations.”