As it happened: US, UK and France strike Syria

How we got here: The US and its allies blame Syria for an apparent chemical attack on the city of Douma just over a week ago. US President Trump and UK Prime Minister May said such action could not go unchallenged.

The missiles targeting Homs were intercepted and did not cause damage, according to a reporter on Syrian state TV in Homs.

General Joseph Dunford, chairman of the Joint Chiefs of Staff, told reporters tonight that this particular round of airstrikes are over.

"This wave of air strikes is over and that is why we're out here speaking to you now," he said.

However, defense officials made clear tonight in the Pentagon briefing that this is a sustained campaign, and strikes will officially end when the Syrian regime ceases its chemical weapons use.

He said that, as of now, there are no reports of losses to the United States.

Here are the three sites he listed: 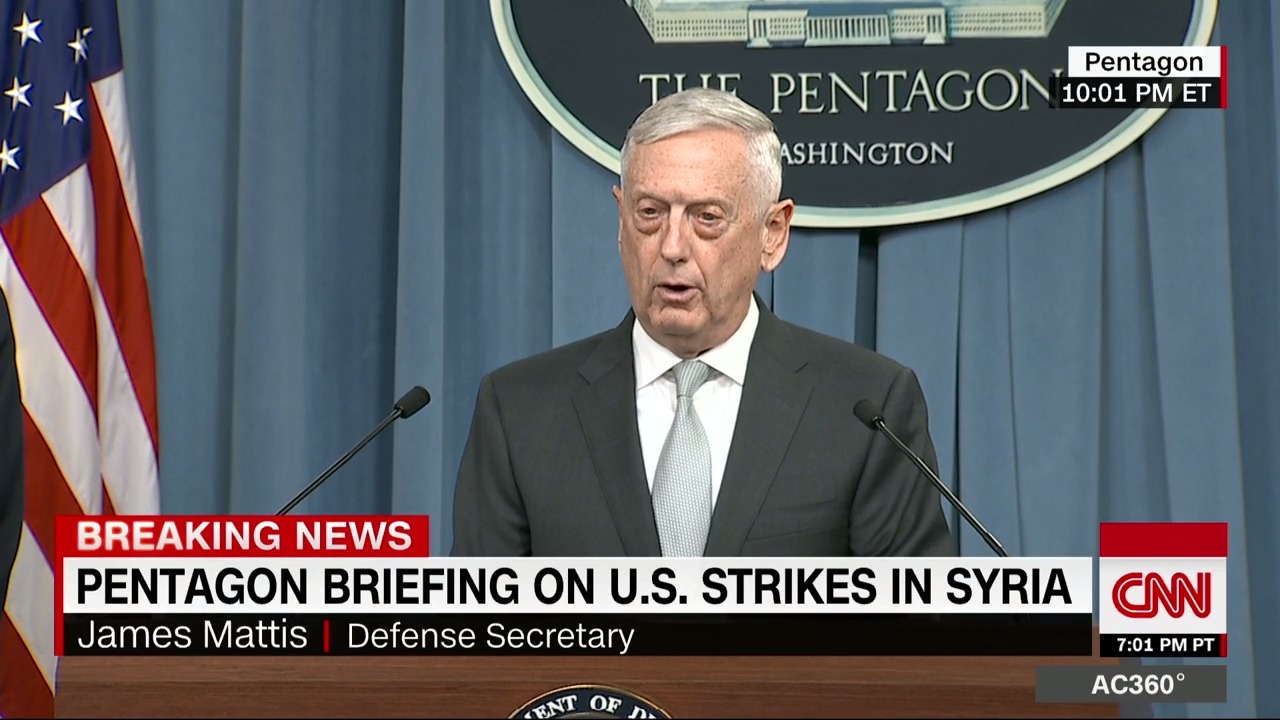 US Defense Secretary James Mattis is speaking at the Pentagon an hour after President Trump announced the start of precision strikes on Syria.

He said that President Trump directed the US military to conduct the operations with the goal of destroying the Syrian regime chemical weapons research and development and production capability.

He added: "Clearly the Assad regime did not get the message last year. This time our allies and we have struck harder. Together we have sent a clear message to Assad and his murderous lieutenants that they should not perpetrate another chemical weapons attack for which they will be held accountable."

Syrian air defenses have also hit 13 missiles in Al Kiswah in the suburbs of Damascus, the state TV also reports.

Two US officials said attacks could continue beyond tonight, with a senior administration official saying “this isn't over."

"What you’ve seen tonight is not the end of the US response," the senior administration official said. "They have built a lot of flexibility into the plan to allow for further strikes based on what they’ve hit tonight."

A US official said a big concern is how much more sophisticated Russia’s capabilities are now compared to last year. The source says they are "significantly enhanced" in terms of anti-strike and anti-aircraft capabilities.

Part of the calculation this week has also been gaming out how Russia will respond either in the region or around the world.

“We are watching what Russians do in the next 24 hours,” the official said.

There will be intelligence collection to see what Russians are up to in the wake of the strikes, such as turning on their systems or talking about retaliating.

CNN's Nick Paton Walsh reports that witnesses say they are hearing explosions in Damascus, Syria, and that they began while President Trump was still addressing the nation.