He tweeted a photo of himself at today's parade.

"The women's soccer team plays the same game that the men’s soccer players play — only better. If anything, the men should get paid less," he tweeted.

About the team's fight for equal pay: Months before the World Cup kicked off, women's team stars Alex Morgan, Carli Lloyd, Megan Rapinoe and Becky Sauerbrunn filed a lawsuit against the US Soccer Federation, claiming they deserve to be paid what the American men are paid for their international performances.

The US Women's soccer team is celebrating their fourth World Cup championship with a ticker-tape parade.

Several of the stars documented the celebration on social media, starting even before the floats took off down the streets of New York. 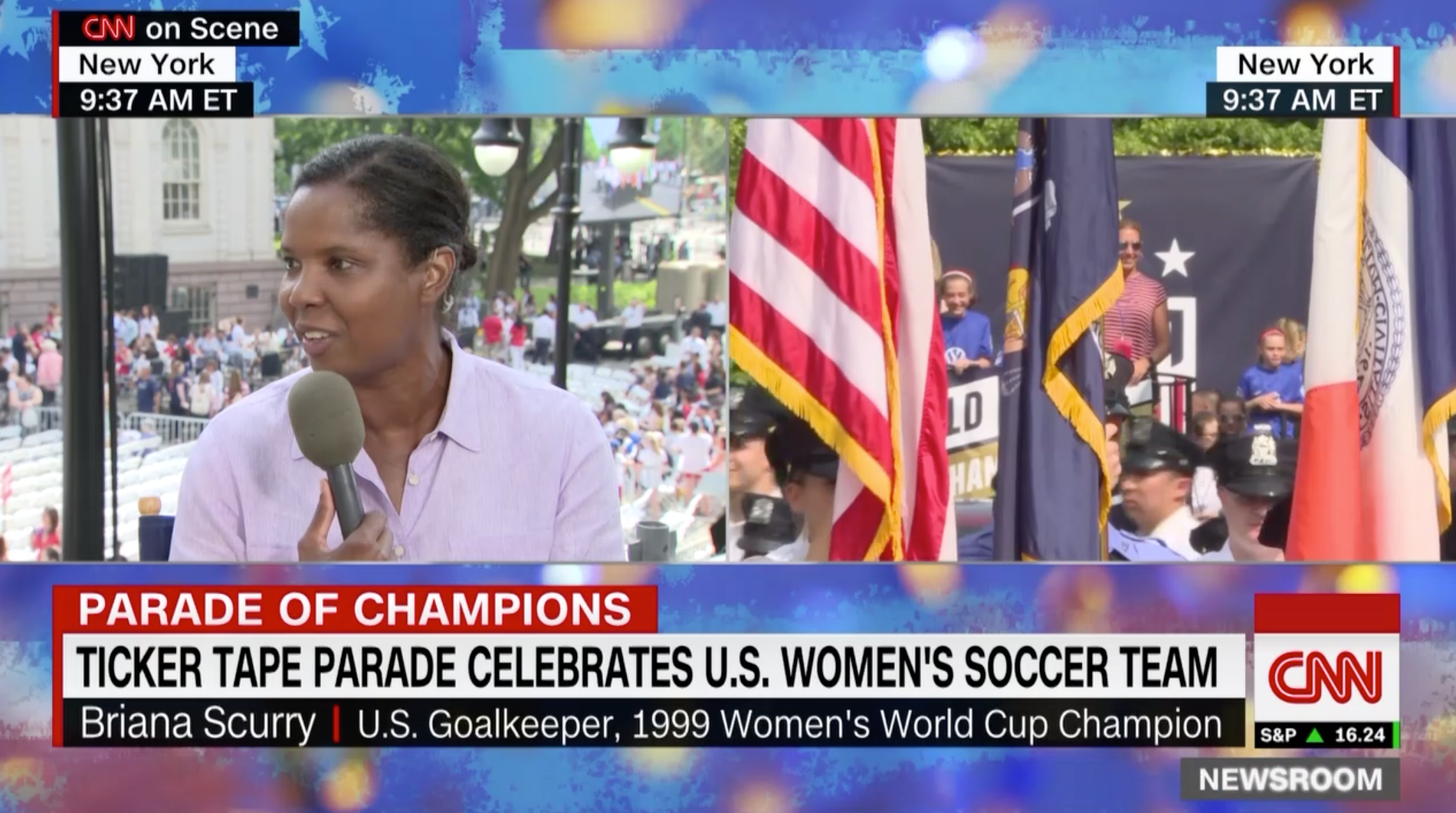 Scurry played on the 1999 Women's World Cup championship team and said on CNN that she thinks there's "no excuse" to not pay women the same as the men's team.

"Back in the day, US soccer used the two Rs: That was rankings and revenue. So now we have the revenue the women’s team makes is equal, if not better in the last seven years, and you also have the ratings and rankings of TV broadcasting ... They're equal, so let's make the pay equal as well," she said.

Scurry said her 1999 team used their platform and championships to advocate for equal resources like promotions and publicity, as well as hotels and travel amenities.

“So that began the fight,” she said.

Scurry said she appreciates Megan Rapinoe speaking out and continuing the fight for equality that was started in 1999.

“I think the social environment now for these women to get change is very different than it was 20 years ago to get change," she added.

CNN's Brooke Baldwin is at the parade in downtown Manhattan. She spoke to a group of young soccer players who came to celebrate the US women's team's victory.

"That was awesome," a 5-year-old soccer player told her.

When Baldwin asked the girl why she loves the sport, she responded: "You just can't give up on your team." 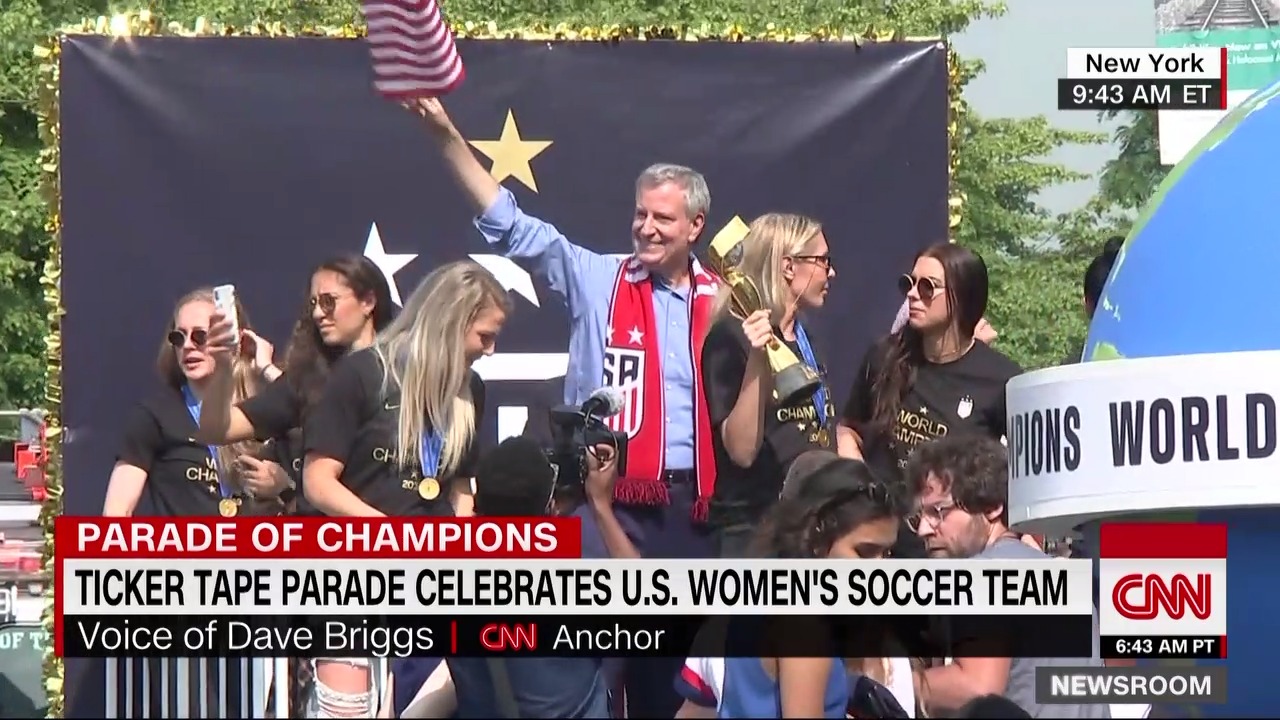 At this moment, the US women's soccer team is riding on floats in lower Manhattan during their World Cup victory parade.

New York City mayor Bill de Blasio, who is also a 2020 presidential candidate, was spotted riding one of the floats. He's wearing a soccer scarf and waving an American flag.

"If I were president of the United States, I would insist that Congress pass an amendment to the Amateur Sports Act requiring — requiring — equal pay for men and women in all of our national sports teams," de Blasio said.

He continued: "And if they didn’t do it, I’d use an executive order to have the Treasury Department enforce on the US Soccer Federation, because they’re Tax Exempt, and they’re discriminating, in effect, against women in pay."

Some context: Months before the World Cup kicked off, women's team stars Alex Morgan, Carli Lloyd, Megan Rapinoe and Becky Sauerbrunn filed a lawsuit against the US Soccer Federation, claiming they deserve to be paid what the American men are paid for their international performances.

Soccer fans are packing Lower Manhattan for today's ticker tape parade. Many of them have brought posters and signs to cheer on the team.

Some of those signs are encouraging Megan Rapinoe to run for president.

Rapinoe — who has described herself as a "walking protest" — has skyrocketed to national prominence for leading her team's undefeated run to win the World Cup on Sunday and championing the lawsuit demanding pay equal to the men's team.

She's outspoken, too: Earlier this year, she asserted that she would not be "going to the f*****g White House" if the women's team won the World Cup. Last night, she also shared her message to President Trump.

Here's a look at some of the Rapinoe supporters: 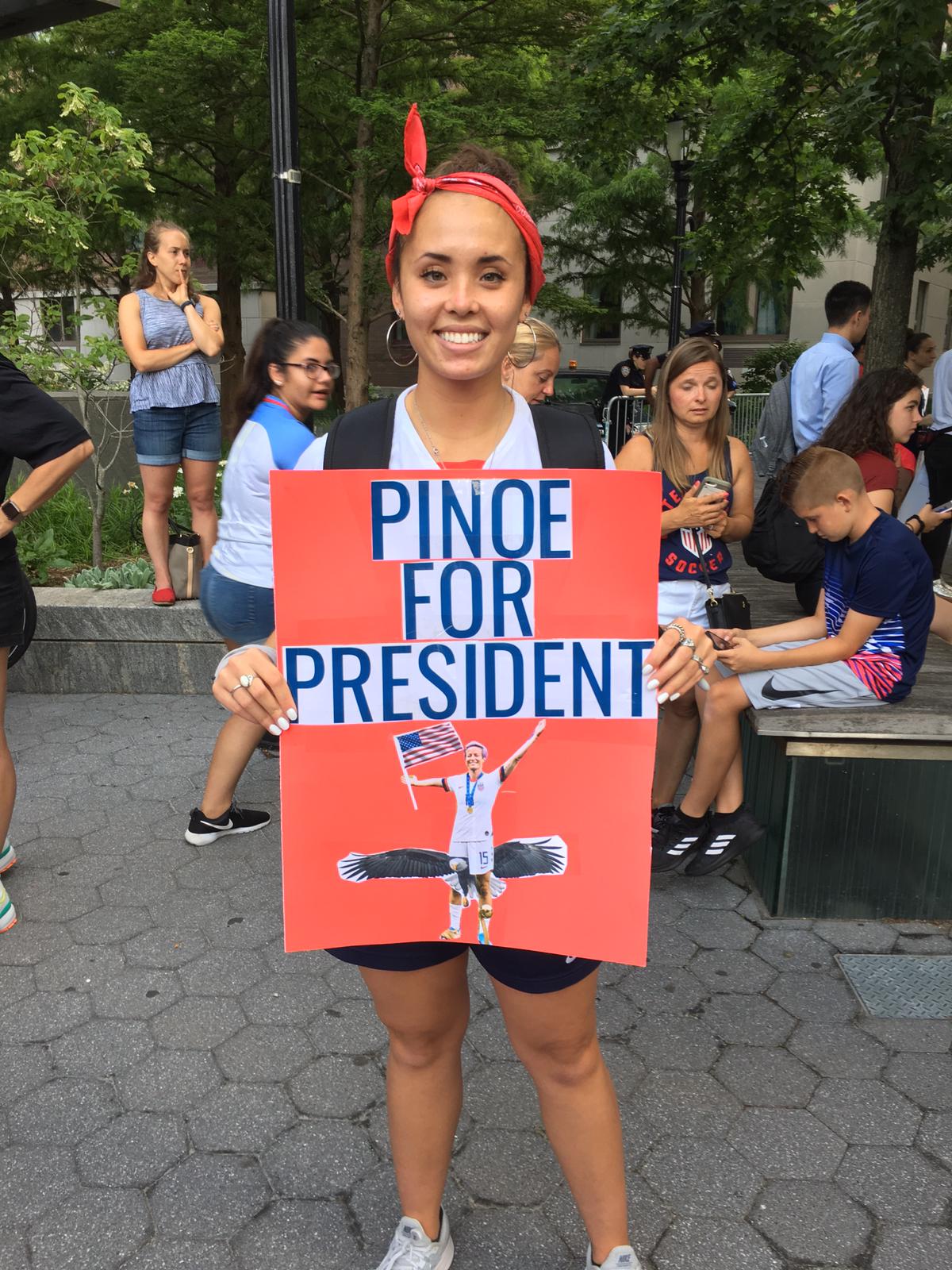 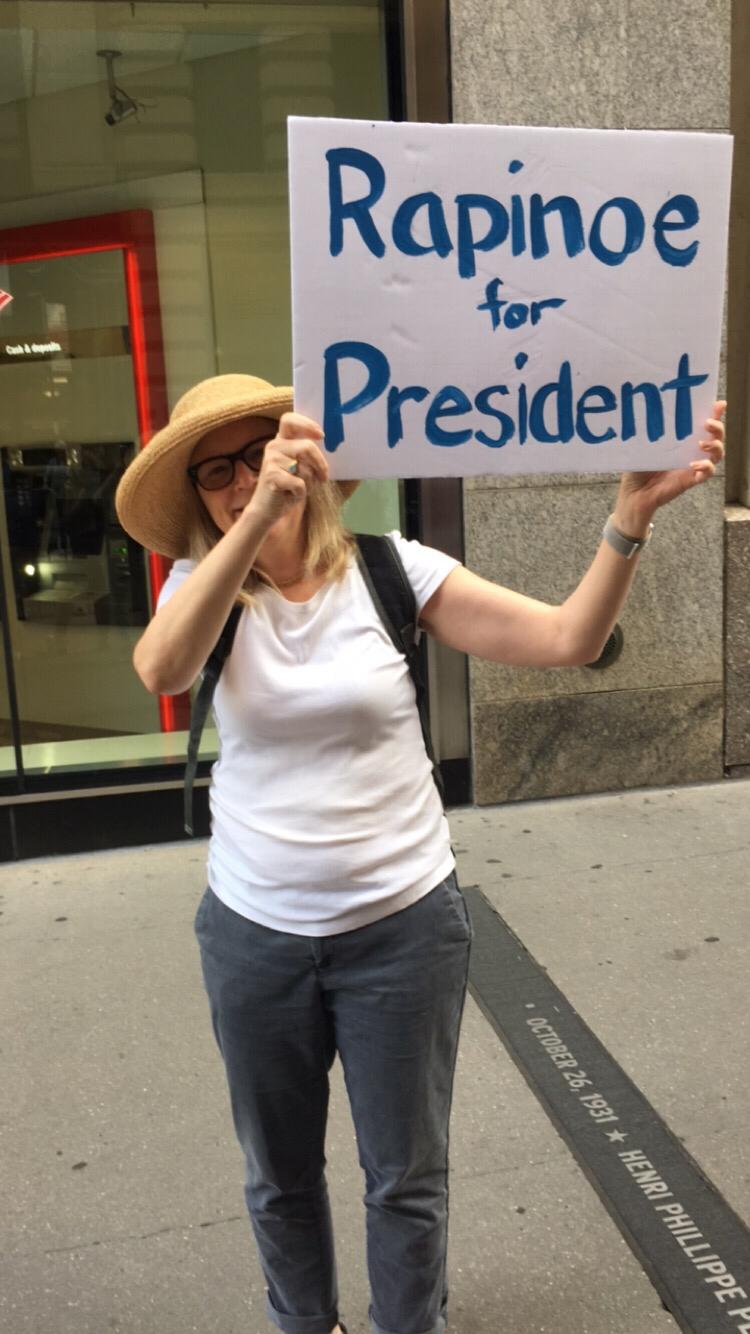 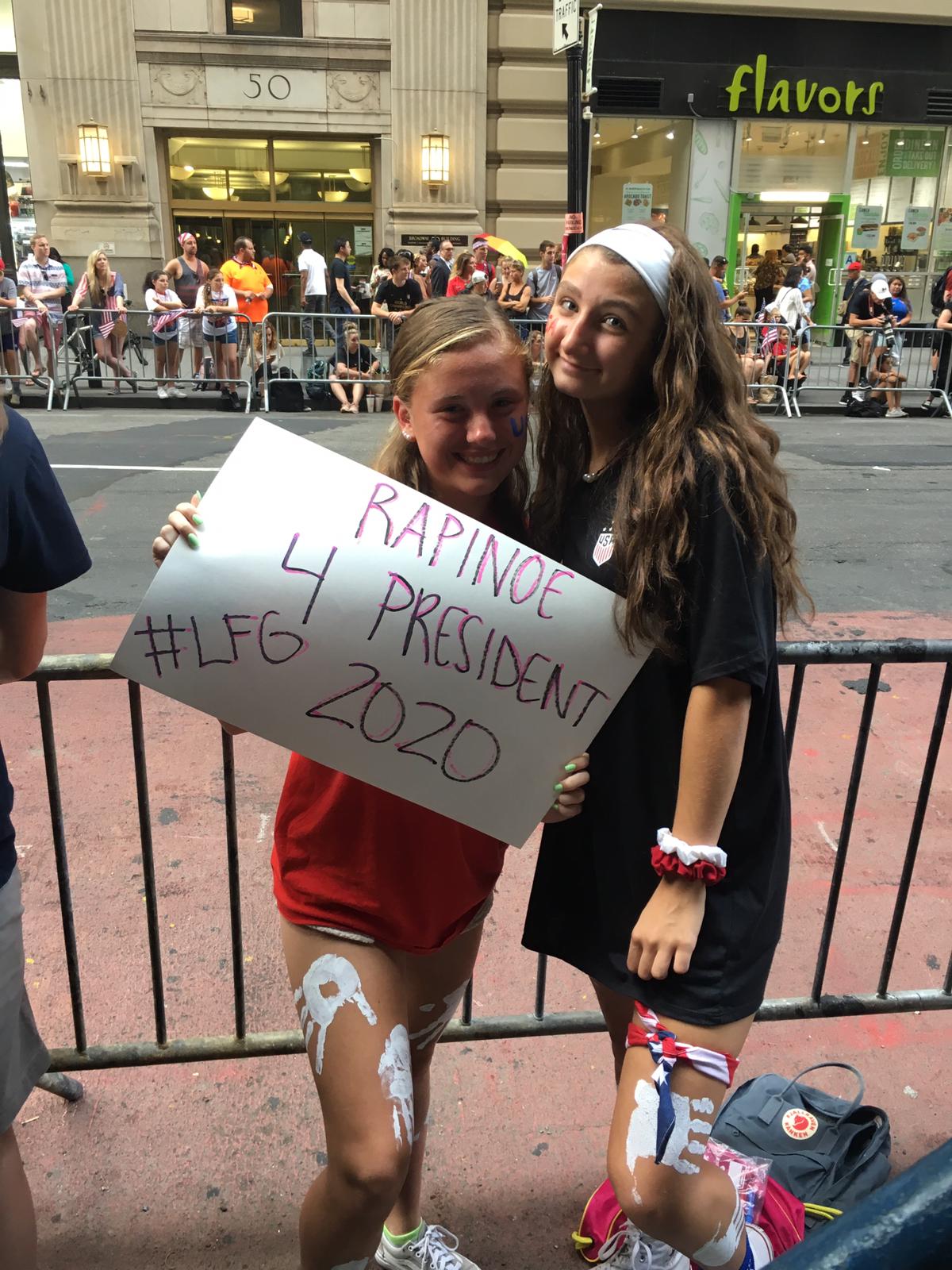 The US women's soccer team has been flashing up the number four in pictures and videos since they won the World Cup on Sunday. Plus, you might have noticed an extra star above the crest on all of the logos, jerseys and new shirts.

The fourth star represents the team's fourth World Cup the team won — the other three representing championships in 1991, 1999 and 2015.

Here are some times on social media the team has celebrated the fourth star: 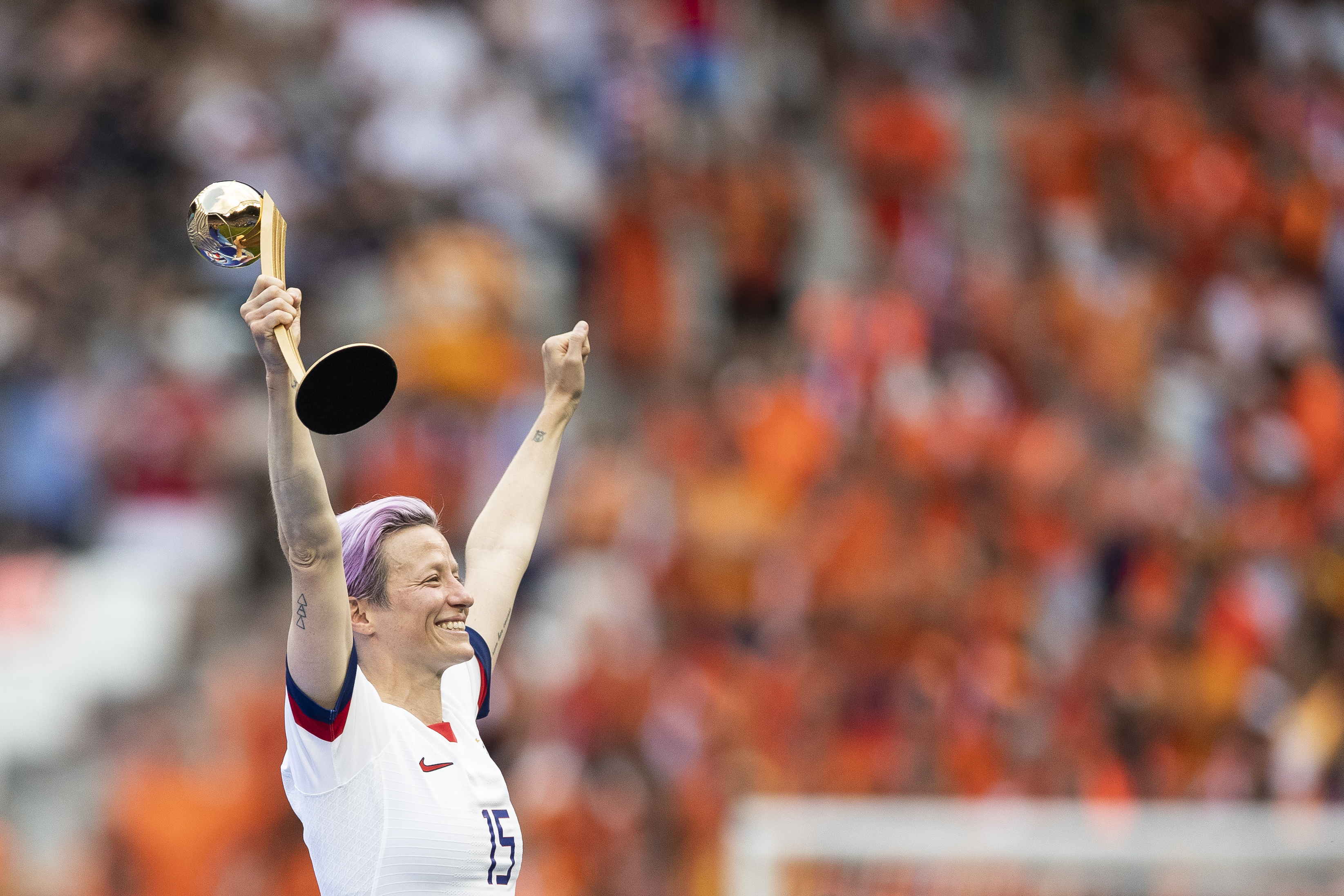 The US Women's soccer team hasn't received an invitation from President Trump to visit the White House after winning the Women's World Cup.

This White House visit has been a point of tension between players and the President.

A few weeks ago, a reporter from Eight by Eight, a soccer magazine that looks at the sport and its place in culture, asked Megan Rapinoe if she was excited about going to the White House if her team wins the Women's World Cup.

Trump responded by tweeting "Megan should WIN first before she TALKS! Finish the job!"

He continued, "We haven't yet invited Megan or the team, but I am now inviting the TEAM, win or lose. Megan should never disrespect our Country, the White House, or our Flag, especially since so much has been done for her & the team."

Rapinoe made no excuses for the willingness of her team to engage in issues beyond wins and losses at a news conference following the World Cup final.

"We say what we feel. All of us really, I know that my voice sometimes is louder, but in meal rooms, in conversations, everybody is in this together," Rapinoe said, with her medal around her neck. "We are such a proud and strong and defiant group of women."

Player Rose Lavelle told Poppy Harlow on CNN that she felt like the team was "all on the same page" about if they would go to the White House if Trump extended the invitation, but didn't specify what that meant.

Another player Kelly O' Hara continued, "I think that's a conversation we'll have as a team and I think that, like she said, deal with it after we enjoy this time together."