The first model, the 777-9X, will be the world's biggest twin-engine jetliner

For air travelers and aviation enthusiasts, there’s a lot to be excited about.

For one thing, there’s the wing: It’s big.

Specifically, the 777-9X will have hinges on its wingtips. The hinges will fold up, allowing the plane to shorten its wingspan when it’s rolling across airport taxiways.

It will be the first design of its kind on any commercial airliner, Boeing says.

Best of Boeing —
The Boeing 747 is one of the iconic commercial jets of the 20th century. It arrived in the late 1960s largely because Pan Am thought bigger planes would be the answer to passenger congestion at airports. The 747 was 2.5 times the size of Boeing's earlier 707 model and was the world's first wide-body aircraft. Its distinctive front bulge came from placing the cockpit on an upper deck, allowing a freight-loading door in the nose. Pilots were trained to taxi this beast by sitting three stories high on a moving truck. Lufthansa received deliver of the 1,500th 747 on June 28, 2014.
courtesy Boeing
Boeing 80 —
Built in 1928, the Model 80 was America's first airliner designed to transport passengers on a scheduled service. It had room for three crew, 18 passengers and 408 kilograms of cargo. The fuselage was covered in fabric. Pilots accustomed to open-air cockpits complained about the enclosed flight deck. Cost: $140,000.
PhotoQuest/Getty Images
Boeing 247 —
Debuting in 1933, the Boeing 247 held three crew, 10 passengers and 182 kilograms of mail. It had a range of 1,198 kilometers and a ceiling of 25,400 feet. The world's first truly modern airliner, it was also the first to incorporate and combine retractable landing gear. It took 20 hours to fly from New York to Los Angeles, including seven stops.
SSPL/Getty Images
Boeing 314 Flying Clipper Boat —
The "Jumbo" of its time, the 314 Clipper made the first scheduled trans-Atlantic flight in 1939. It held 74 passengers and cemented regular flying on long-haul routes from North America across the Pacific to Asia and across the Atlantic to Europe. Its well-appointed cabin heralded the real birth of in-flight service.
Bernard Hoffman/Time & Life Pictures/Getty Images
Boeing 307 Stratoliner —
Based on the B-17 military bomber, Boeing's 307 Stratoliner first flew on December 31, 1938. It was the first commercial transport aircraft with a pressurized cabin, allowing it to fly above the clouds and bad weather. Howard Hughes bought one, and turned it into a "flying penthouse" with a bedroom, two bathrooms and lounge area.
TIM SLOAN/AFP/Getty Images
Boeing 707 —
The 707 doesn't look like much now, but it started the 7-series of Boeing planes and is viewed as the jet that ushered in commercial air travel. It was the dominant passenger airplane of the 1960s.
Maurice Jarnoux/Paris Match via Getty Images
Boeing 727 —
Boeing struck gold with the 727. Just 250 were planned, but demand was so high a total of 1,832 were built by the time production ceased in 1984. The most distinctive of Boeing's early jets, with a T-shaped tail and a trio of rear-mounted engines, the noisy 727 took its first flight in 1963. It was designed to use smaller, less developed runways, making it amenable to a host of out of the way airports.
Central Press/Getty Images
Boeing 737 —
Chances are you've flown on a 737, which has been around since 1967. The best-selling jet in aviation history offered six-abreast seating, allowing more passengers per flight. The number of seats was increased by moving the engines under the wing. Flight engineers were made redundant by the 737's technology and a two-crew cockpit became standard.
Robert Alexander/Archive Photos/Getty Images
Boeing 777 —
Upon hitting the skies in 1994, the 777 became the widest, most spacious jetliner in its class. Carriers have increasingly used the 777 as a fuel-efficient alternative to other wide-body jets, particularly for long-haul flights.
Boeing
Boeing 787 Dreamliner —
The Dreamliner is said to have revolutionized jetliner design and brought commercial aeronautics into the 21st century. Its "plastic" fuselage makes it lighter and 20% more fuel-efficient than similar-sized aircraft, while it claims to enhance the passenger experience with bigger windows and more space. Nevertheless, Boeing's 787 Dreamliner launch gave the company a nightmarish ride. The four-month global grounding of the entire Dreamliner fleet in early 2013, kicked off by a battery fire on an ANA flight in January, has been unprecedented in the past 30 years. The grounding was lifted at the end of April 2013.
Stephen Brashear/Getty Images
Boeing 777X —
Boeing officially launched its 777X program in 2013 at the Dubai Air Show. The 9X version will have a range of over 14,075 kilometers (8,746 miles) and fit 400 passengers. Notable changes from the original 777 include a longer, composite wing and a new GE engine. Production is scheduled to begin in 2017 and first delivery is targeted for 2020.
courtesy boeing

Boeing through the ages: A retrospective

The hinged wingtips alone will measure 12 feet. Locking pins will prevent them from folding during flight, Boeing tells CNN.

Prototype testing is expected to get underway soon, Boeing says.

During testing, engineers plan to fine-tune and try to perfect the final design.

These giant wings will give the airliner extra lift, like a giant sailplane glider.

They’ll help the plane save an overall 12% more fuel than the Airbus A350, Boeing says.

Initial versions of the 777 have been flying since the mid-1990s, and the 777X has been in the pipeline for two years already.

But the buzz got louder last week when Boeing announced it finalized a basic design.

“The inside is amazing,” Rohan Gosh tweeted. 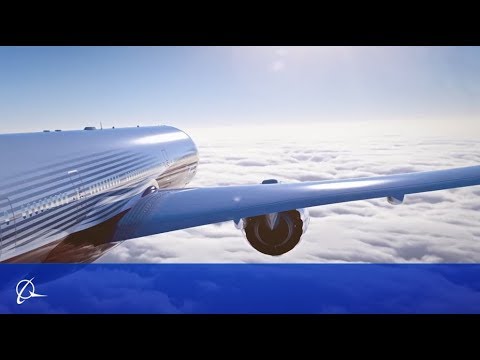 Like the wings, the plane’s cabin also will be big, Boeing says.

What else might grab air travelers? The window seats.

The 777-9X’s windows will be 15% larger than competing airliners, Boeing says.

The windows will be placed at a height that will be eye level for most passengers.

Boeing is hinting about other passenger goodies on the 777X, such as new lighting and “enhanced architecture” for the cabin’s interior design.

Airlines will have options to configure each passenger class differently.

Each class could have unique overhead ceiling and stow bins, for example, that would “create the feeling of separate and distinct cabins,” Boeing says.

Amazingly, the engines’ fuel nozzle tips will be created via a process called additive manufacturing – aka 3-D printing.

Although the fuselage will be made of aluminum, the wings will consist of a strong, yet super bendy material that’s driving the future of aviation: carbon-fiber reinforced polymer.

Basically you could call it super plastic.

This is the same stuff that allowed Boeing’s innovative twin-engine 787 Dreamliner to fly farther on less fuel when it first entered service in 2011.

“We’ve learned from that, and we’re taking applying it to the wings on this new plane,” Boeing spokesman Scott Lefeber says.

These wings are baked

Boeing plans to bake portions of the 777-9X in a sort of kitchen.

What’s on the menu? Wings.

It’s a huge, 1.3 million-square-foot facility under construction near the company’s longstanding factory in Everett, Washington.

Inside, Boeing plans to use three giant ovens called autoclaves to pressure-bake the 777X wings at temperatures up to about 350 degrees Fahrenheit (177 degrees Celsius).

“An easy way to understand it is, you’re baking the material so it forms to the strength and characteristics that you want,” Lefeber says.

After the wings are baked, they’ll be moved to Boeing’s nearby plant for final assembly.

So, if the wings are made from carbon-fiber reinforced plastic, why not make the 777X fuselage out of the stuff, too?

Short answer: A carbon-fiber composite fuselage would have added much more time to the development process, Boeing says.

With the 777X, Boeing says it wants to maintain the reliability of today’s 777 while improving its economic profile and delivering it at a time when airlines “need it most.”

Production is expected to begin in 2017.

Six airlines have placed orders for 320 777Xs, Boeing says, including Emirates, All Nippon Airways and Lufthansa. No U.S.-based carriers are among the six.

Boeing’s new X family is part of an engineering revolution that’s allowing jetliners with only two engines to fly many of the same global routes as bigger, fuel-guzzling four-engine airliners such as the 747 and the Airbus A380 Super Jumbo.

The trend has triggered speculation about the future of four-engine airliners.

New single-aisle airliners are in the works, too.

Carriers will need more than 22,000 single-aisle planes in the next two decades, according to studies by both Boeing and Airbus.

Aircraft companies have new planes in the pipeline, including Boeing’s 737 MAX, the Airbus A330neo and Bombardier’s C Series, which the Canadian company called “the first all-new designed, single-aisle aircraft that the industry has seen in over 25 years.”

These projects, along with the 777X family, demonstrate that fast-developing technology is pushing the capabilities of the aviation industry forward and changing the way humans travel across the planet.