The ‘Caspian Sea Monster’ rises from the grave

By Miquel Ros, CNN
Updated 7:13 PM EST, Wed December 29, 2021
Link Copied!
Sea beast: The only Soviet-era Lun-class ekranoplan ever completed has been left to rust for 30 years, but now this remarkable flying machine is on the move.
Musa Salgereyev/TASS/Getty Images
On the beach: The ekranoplan has been moved to a beach near Derbent in the Dagestan region where it'll form the centerpiece of a new park.
Denis Abramov/Sputnik/AP
Heavy lifting: After three decades of inaction, getting the ship-plane back on the move was no easy task, requiring the assistance of rubber pontoons and a carefully coordinated choreography involving several vessels.

Musa Salgereyev/TASS/Getty Images
Low flying: Though often classified as a boat, the ekranoplan flies up to five meters over the water, making it ideal for slipping under radar surveillance.
Musa Salgereyev/TASS/Getty Images
Big bird: The ekranoplan is actually slightly bigger than the A380 superjumbo, the world's largest passenger plane.
Musa Salgereyev/TASS/Getty Images
Armed and dangerous: The Lun-class ekranoplan was equipped with anti-ship missiles, which were mounted on the top of its fuselage.
Denis Abramov/Sputnik/AP
One of a kind: This is the only example of the Lun-class ekranoplan. The program to build more was scrapped because of the Soviet Union's collapse.
Musa Salgereyev/TASS/Getty Images
Fast flier: Powered by eight turbofans attached to its stubby wings, the so-called ground effect vehicle could travel at speeds of up to 550 kph.
Denis Abramov/Sputnik/AP
Drone development: The ekranoplan concept lives on in new projects. US startup The Flying Ship Company is working on an unmanned ground effect vehicle to move cargo at high speed.
Courtesy Flying Ship Company
AirFish 8: Singapore-based Wigetworks has developed AirFish 8, a prototype that builds upon groundwork done by German engineers Hanno Fischer and Alexander Lippisch during the Cold War.
Courtesy Wiget Works

Beached for over a year on the western shores of the Caspian Sea, it looks like a colossal aquatic beast – something bizarre perhaps more at home beneath the water than in the air. It certainly doesn’t look like something that could ever fly.

But fly it did – albeit a long time ago.

Back in July 2020, after lying dormant for more than three decades, the Sea Monster of the Caspian, one of the most eye-catching flying machines ever built, was again on the move in what was, very likely, its final journey.

It took 14 hours for a flotilla of three tugs and two escort vessels maneuvering slowly along the shores of the Caspian Sea to deliver their bulky, special cargo to its destination, a stretch of coast near Russia’s southernmost point.

It’s here, next to the ancient city of Derbent, in Russia’s republic of Dagestan, that the 380-ton “Lun-class Ekranoplan” has found its new, and most likely definitive, home.

The last of its breed to sail the waters of the Caspian, “Lun” was abandoned after the 1990s collapse of the Soviet Union, condemned to rust away at Kaspiysk naval base, some 100 kilometers (62 miles) up the coast from Derbent.

But, before it could fade into oblivion, it was rescued thanks to plans to make it a tourist attraction. Ironically, this happens right at a time when this unusual sea craft concept could be poised to make a comeback.

The 380-ton "Lun-class Ekraonoplan" has moved for the first time in 30 years.
Musa Salgereyev/TASS/Getty Images

Ground Effect Vehicles, also known as “ekranoplans,” are a sort of hybrid between airplanes and ships. They move over water without actually touching it.

The International Maritime Organization classifies them as ships, but, in fact, they derive their unique high-speed capabilities from the fact that they skim the surface of the water at a height of between one and five meters (three to 16 feet).

They take advantage of an aerodynamic principle called “ground effect.”

This combination of speed and stealth – their proximity to the surface while flying makes them difficult to detect by radar – got the attention of the Soviet military, which experimented with several variants of the concept during the Cold War.

Their deployment on the vast inland body of water between the Soviet Union and Iran led to them acquiring the nickname “Caspian Sea Monster.” 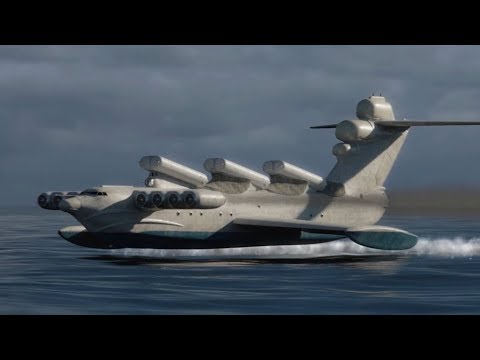 The “Lun” ekranoplan was one of the last designs to come out of the Soviet ground effect vehicle program. Longer than an Airbus A380 superjumbo and almost as tall, despite its size and weight, the Lun was capable of reaching speeds of up to 550 kilometers per hour (340 mph) thanks to eight powerful turbofans located on its stubby wings.

This formidable machine was even able to take off and land in stormy conditions, with waves of up to two and a half meters. Its intended mission was to conduct lightning sea-borne attacks with the six anti-ship missiles it carried in launch tubes placed at the top of its hull.

I love it when an ekranoplan comes together.
Musa Salgereyev/TASS/Getty Images

The ekranoplan that has been moved to Derbent is the only one of its class ever completed and entered service in 1987.

A second Lun, unarmed and assigned to rescue and supply missions, was at an advanced state of completion when, in the early 1990s, the whole program was canceled and the existing Lun withdrawn from service.

After 30-plus years of inaction, getting this sea beast back on the move was no easy task, requiring the assistance of rubber pontoons and a carefully coordinated choreography involving several vessels.

Lun is to become the star of Derbent’s planned “Patriot Park,” a military museum and theme park that will display different sorts of Soviet and Russian military equipment.

Construction of the park seems to have moved at a much slower pace than originally planned, though. Rather than starting work in late 2020, a 400 million ruble budget (approx. $5.4M) was reportedly allocated to the project in April 2021.

Then, in November, Russian news agency Tass quoted the local mayor, who pointed at the 2022 summer season as a possible opening date.

All this time Lun has been, literally, beached, waiting for the museum to be built around it.

The fact that this giant ekranoplan is not yet officially open to visitors and that the beach it sits on may be technically off limits, has not prevented it from becoming an immediate tourist magnet.

The photogenic allure of this unique Soviet-made contraption has been hard to resist for many of the Russian tourists that, due to Covid-related international travel restrictions, have been flocking to Dagestan this year.

Lun has not only become an Instagram favorite (just check #лунь), but some bloggers have even managed to sneak in.

While it’s created a stir, the ekranoplan isn’t the only draw for visitors to Derbent. The city claims to be the oldest continuously inhabited settlement in Russian territory. Its citadel and historical center have been designated by UNESCO as World Heritage Sites.

Lun will add to the attractions of a region that, up until the coronavirus pandemic, had seen a number of initiatives to open it up to tourism, including the launch of cruise itineraries in the Caspian Sea.

When it opens, Derbent’s Patriot Park won’t be the only Russian museum exhibiting an ekranoplan. A much smaller Orlyonok-class ekranoplan can be found at the Russian Navy Museum in Moscow.

While ground effect vehicles fell out of favor in the past few decades, the concept has been experiencing a resurgence of late

Developers in Singapore, the United States, China and Russia are working on different projects that aim to bring ekranoplans back to life, although with rather more peaceful purposes.

Singapore-based Wigetworks is hoping to create a modern version of the ekranoplan.
Courtesy Wiget Works

One of them is Singapore-based Wigetworks, whose AirFish 8 prototype builds upon groundwork done by German engineers Hanno Fischer and Alexander Lippisch during the Cold War.

Wigetworks acquired the patents and intellectual property rights and have set about trying to improve and update those earlier designs to create a modern ground effect vehicle.

Also in Asia, Chinese ekranoplan Xiangzhou 1 flew for the first time in 2017, although little is known about this project.

In the United States, The Flying Ship Company, a startup backed by private investors, is working on an unmanned ground effect vehicle to move cargo at high speed. Think unmanned delivery drones but over water.

The project is at its early stages, although founder and CEO Bill Peterson tells CNN his team is planning to bring this project to fruition within a seven-year timeframe.

Another American startup backed by some prominent Silicon Valley investors, REGENT Craft, aims to link the country’s main coastal cities with “seagliders”, a concept that combines wing-in-ground effect and hydrofoil technologies to skim the surface of the sea at high speeds

And Russia, home of the ekranoplan, hasn’t given up on the concept.

Several projects have been touted during the past few years, although none has managed to make it past the design stage yet.

Beriev, a maker of jet-powered amphibious aircraft, came up with the Be-2500 concept, and, more recently, it has been reported by Russian media that a new-generation military ekranoplan, tentatively named “Orlan,” was under consideration.

Another, privately-funded, project has sprung out of Nizhny Novgorod, an industrial city on the banks of the river Volga closely connected with the origins of ekranoplan technology, where Russian firm RDC Aqualines, which has also offices in Singapore, is developing its own line of commercial ekranoplans able to carry three, eight and 12 passengers, and possibly more in a not so distant future.

Its designs have caught the eye of a group of entrepreneurs which aims to establish a fast link across the Gulf of Finland, connecting Helsinki to the Estonian capital, Tallinn, in about 30 minutes.

It might be that soon you won’t need to visit a museum to spot an ekranoplan, after all.